In an earlier tip, I saw how to perform SQL database backups using file snapshot backups. In that tip, I saw how SQL Server data files can be created directly on Azure storage. Is there a way by which we can encrypt the data files on Azure by implementing transparent date encryption (TDE) locally on an on-premises server?

This tutorial assumes that you already have resources in your Azure environment and you are familiar with the Azure portal. If you are new to Azure, you can subscribe to a trial account here, which will give you access to Azure services for a year and a credit of USD $200. It is assumed, that you already have SQL Server databases that have their database files stored directly on Azure storage. If you don't have one, you can refer this tip for setting up sample databases that make use of this feature. In this tip, we will perform a demo by detaching and attaching a test database from one SQL instance to another with and without TDE enabled for the database whose database files reside on Azure storage account. This tip assumes you are already familiar with the concept of TDE. To learn about TDE, you can refer this tip.

As shown in the screenshot, you can see a database named motest on a SQL Server instance.

As you can see the SQL Server database files reside on Azure storage. We can detach this database and try to attach it to another SQL Server instance. For detaching database, right click on the database and click on Tasks > Detach as shown. 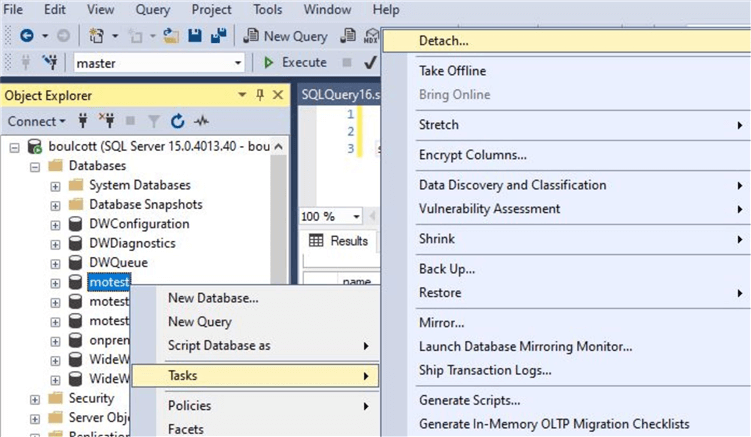 Once done, you will see the database attached to the other SQL instance as shown.

By using this method, you use how easily the databases can be detached from one SQL instance and attached to another SQL instance just by a few clicks. It may be a bit risky to have this kind of easy option on critical systems as database security can be easily compromised.

In this next section, we will see how we can make use of the TDE option in order to safe guard the database files further.