Power BI DAX CONCATENATEX Function: How and When to Use It

To better understand this function, I will start by describing the makeup of this DAX function and later provide examples of business use cases where the function can be used.

While choosing to use this DAX function, it is important to understand the following points:

The syntax of the DAX CONCATENATEX function is a little bit complex as compared to that of the CONCATENATE function as seen in the syntax code below.

So, when and how do you use the DAX CONCATENATEX function? There are several ways Power BI developers would use this function, however, I will describe a very common but powerful use case of this function.

Let's say the table below represents a car sales company. The company might want to know what months they sold more or less cars so they can drive business expectations or get insights into their sales for marketing purposes.

The above table visual might span many years; thus, it would not be logical to do this calculation manually. So, the requirement might be that the company wants to show on a single row for each month the "OrderDates" where they sold more cars and where they sold less cars.

As can be seen in the diagram above, looking at January 2012, we can see that more cars were sold on the 25th and 18th of that month (which was 23 cars sold respectively). So, the business wants to see these two dates in a single row representing January 2012. Similarly, the least number of cars sold in January 2012 was 2 cars which was on the 4th of January 2012. This is the sort of business requirements that CONCATENATEX (along with some other DAX functions) comes in handy.

What we hope to arrive at in the end is something like the table below.

How to Use CONCATENATEX to Meet Business Case

To see how this is done, I will include all the steps above in a single measure calculation using variables to hold the return values as seen in the code below.

For highest cars sold use the code below. low.

For fewest cars sold use the code below. low.

As can be seen in the DAX code above, I have used a comma delimiter in the CONCATENATEX function. I could have used any other delimiter that the business required. Also, note that I have not used the "Total Cars Sold" measure in a variable.

There is another common use case for the CONCATENATEX function in Power BI which involves where a business requires that the values in a column representing a particular category be placed in the same row in the table. For example, take the table below. 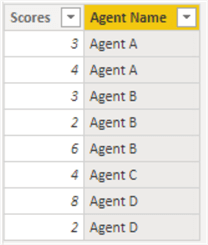 The requirement is to ensure all "Scores" for each "Agent Name should be placed in a single row in the table with each score separated with a delimiter like a comma. See the expected output below.

So how do we use the CONCATENATEX function to get to the expected output table as seen above?

To do this, do the following. Create a DAX measure as seen in the DAX code below.

Then to visualize it, just drag in the other columns you need in the table visual and drag in the newly created measure, that would be it.

We can also achieve the same output table above in a different way, still using CONCATENATEX, but this time we will be creating a table in Power BI using DAX and referencing the original table "DemoTable". To do this, follow the following steps below.

First, click on the "Modeling" tab in Power BI Desktop, and then click on "New table" as seen below.

Next, create the DAX code as seen below.

As before, to visualize it, just drag in all the columns you have created in the new table calculation. That's it! You should be able to see the output table visual below.

In summary, as mentioned earlier, there are other use cases for the CONCATENATEX DAX functions which I have not mentioned in this article. It would be interesting to hear from any reader other ways they have used this function. However, the examples shown here would provide you with a basis for using this DAX function.