Moving forward with the PowerShell series, I would like to shift the attention to types of loops: for, foreach and while loops. The main reason being that you will have the need to execute a particular piece of code iteratively, and you will definitely need to know how to do it in Microsoft PowerShell, so let's get to it.

In this tutorial, we will learn how to declare, and use the different types of structures that allow us to execute code in a repeated fashion, in PowerShell scripts, along with several examples to have a clear understanding of the logic.

For Loops in General

Formally speaking, a for loop is a language construct (for simplicity, think of a construct as a basic building block) that you can use to create a block of code that will execute repeatedly or a specific number of time, based on a condition.

Ideally such iterations should be finite so that you can end up with a specific final result, otherwise you will enter an endless loop that will prevent you from reaching a desired state.

The syntax in PowerShell is very similar to the one used in many other programming languages, so it will be very familiar to you. There will be a couple of things that can be done differently in PowerShell, but if you have followed along so far, it should be no surprise that PowerShell has beefed up versions of what you regularly find in other languages.

Here's a high level approach of how you can think of it:

Let's go through the following examples to get a better grasp on this structure: 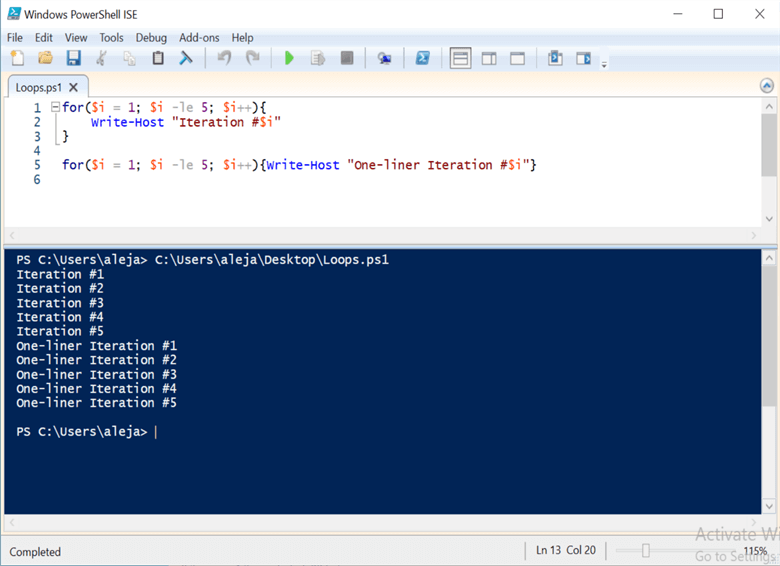 You'll see two "different" for statements, well they are the same; I've just formatted the bottom one a bit different so that you can see that your for statement can be in one line and it will run just fine. Aside from that, you will see that the variable $i is initialized with a value of 1, and the iteration will take place as long as the variable $i is less or equal to 5, incrementing its value by 1 after every iteration.

That would be the "classic" approach that you mostly see in other programming languages, but if you've followed the series along, you already know by now that with PowerShell you can do things a little bit different, so let's take a look at some examples to see some variations.

You can work with multiple variables in the definition of your for loop statement. 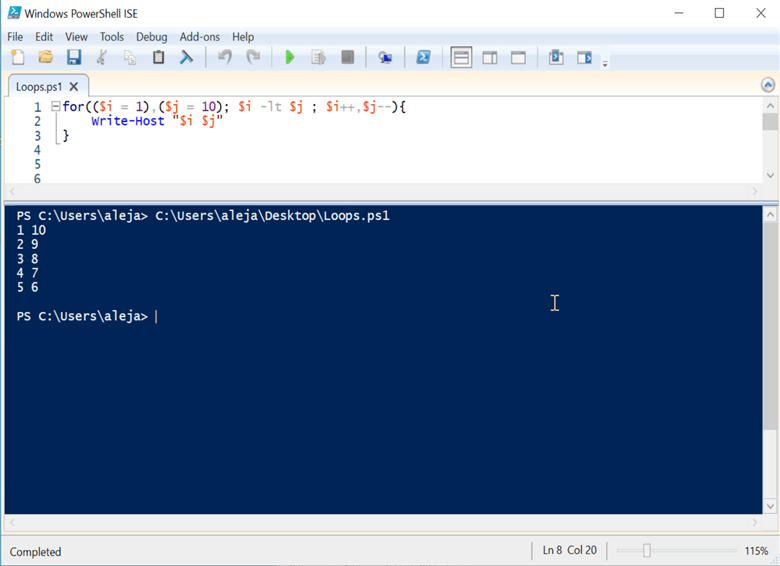 So in PowerShell you are not bound to just working with one variable and call it a day, which opens the door for more possibilities to find clever solutions for specific problems. Now for this to happen, you must separate each variable initialization with a coma and wrap each within parenthesis, otherwise it won't work; for the increment or decrement of the variables, you can skip the parenthesis if you are using ++ or --.

Let's throw in an additional variable to see if we are able to pull it off: 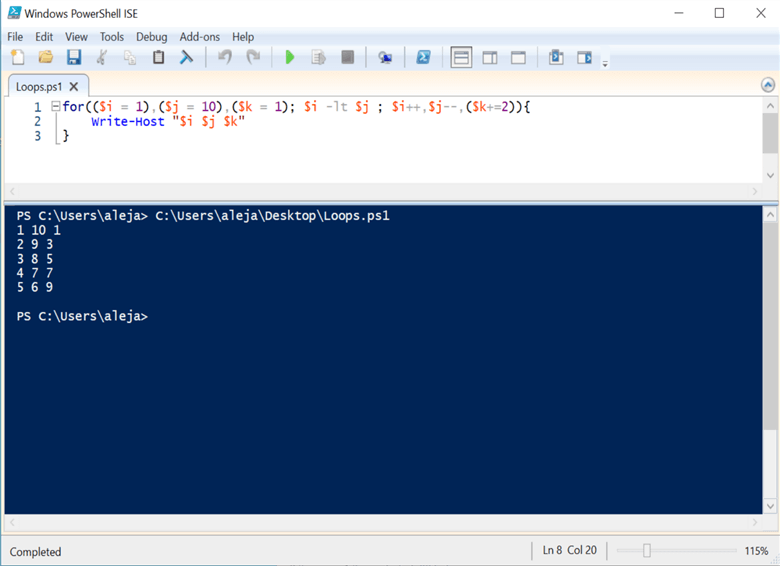 Interestingly enough it is possible, and I'm curious if there is a defined limit. Now, if you take a closer look at the end of the definition of the for loop, you'll see that the variable $k is wrapped in parenthesis, which you must if you aren't using either ++ or --.

You can have a "ghost" for loop definition by writing your code in a particular way. Let me show you what I mean by "ghost definition". Yes, "ghost" is something that I'm coming up with right now… because why not? 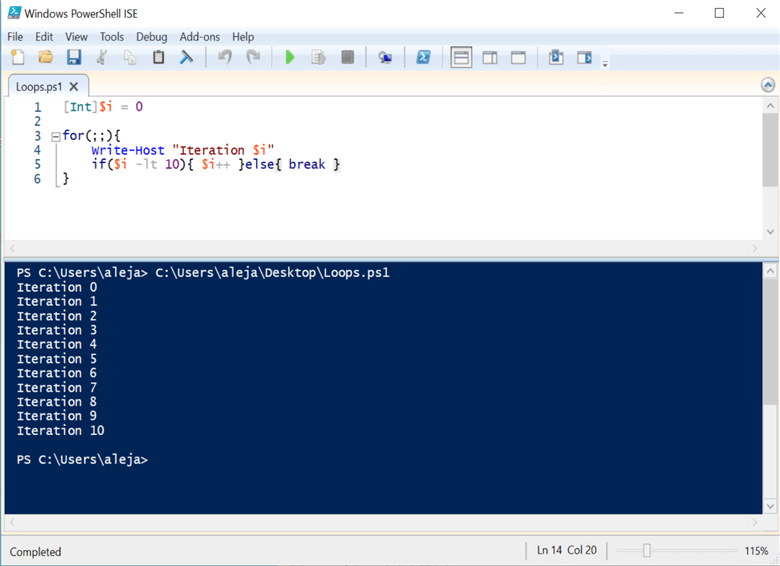 As you can see, the for loop definition is completely empty! In this particular example, the definition of the variable was done outside the for loop and within the loop code is the logic to force it to stop at some point. Yes, as we previously saw with the switch statement, you can throw the keyword "break" to get out of the loop.

Although this is just PowerShell allowing us to have one more cool way to do stuff, it is not meant to address every single case. If you don't properly write the code to reach a stopping point, it will run forever until you either hit Ctrl+C, or kill the process running the script, or shutdown the server where the script is running, or blow up the machine where the script is hosted (ok, this last one was just me exaggerating, but you get the point).

Before wrapping up the for loop, let me leave you one more example of how you can define and use the for loop, for the sake of science of course:

Using carriage returns instead of semicolons to separate each section of the definition. 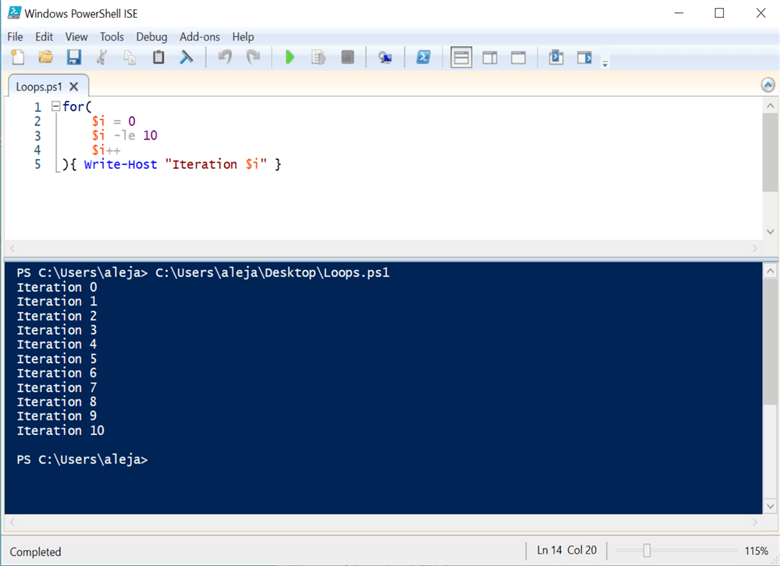 The foreach loop is an iteration structure mainly used to traverse all the items within a bag/collection of items. In practice, such collection of items are mostly arrays (classic or multidimensional) and hash tables.

Everything that you achieve with a foreach loop can be perfectly done with a for loop. However, the foreach version, if properly written, can be easier to the eye of the developer going through the code (either for troubleshooting or just to learn it).

The way you define a foreach loop is a bit different that the for loop:

Let's take a look at an example to see it in action: 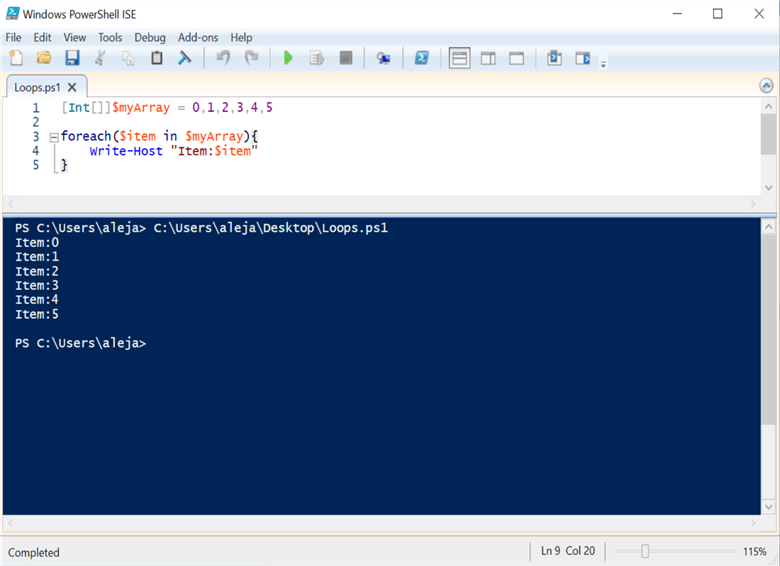 Now let's take a look at its equivalent using the for loop so that you can clearly see the difference between them: 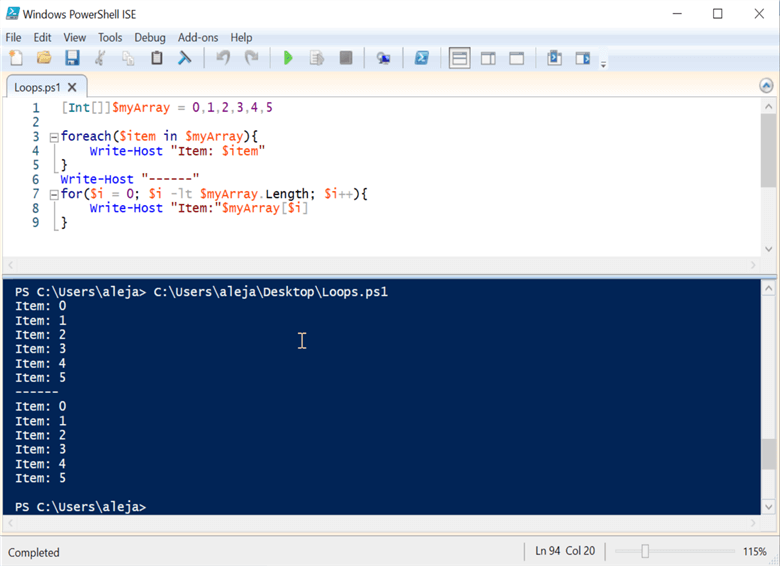 As you can see, in terms of lines of code both are basically the same, but with the for loop version there are a few nuances that you might experience:

Likewise, as with the for loops, you can write the foreach statements in one line without any issue.

Of course, every problem will have its way to be approached, but it's a good thing to know these details beforehand so that you can make your life easier while attempting to tackle that particular problem.

While Loops in PowerShell

The while loop provides you one more way, in addition to the couple of ways I already covered, to make a block of code iterative. If you ask me, the while is a bit easier to write (in terms of defining it) than the other ones, and you can basically achieve the exact same thing with it, if you adapt your code appropriately.

Here's how you define a basic while loop:

Let's take a look at some examples to see it in action.

A normal while loop to achieve the same end result as the examples demonstrated for the for loops: 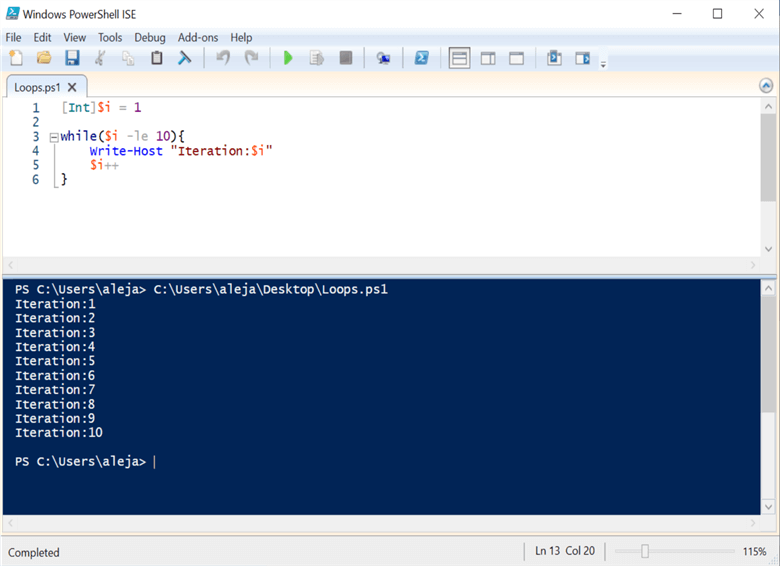 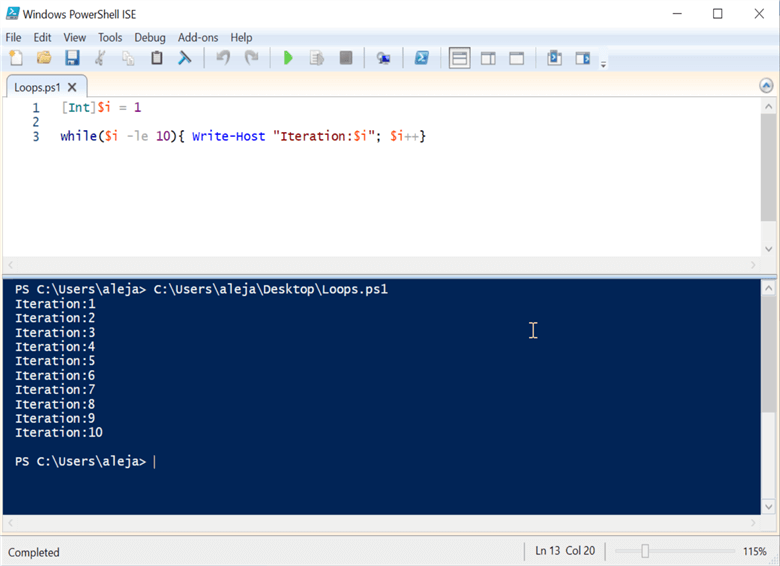 Writing a while loop that loops infinitely in its condition statement, but force it's stopping point inside the code using a break: 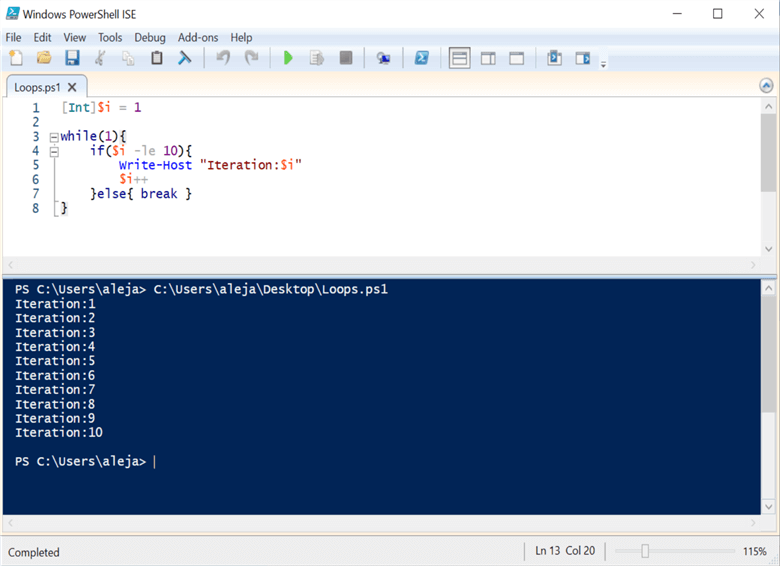 Or you could also mix the two approaches, where you have a specific condition defined, but you also have a different condition within your code block that hits a break point if the condition is met.

As a bonus content, I'll briefly show you these two additional iterative constructs, for your own toolbox.

In many other languages, the do-while approach is rather common and it basically guarantees that the block of code defined will be executed at least once.

Here's how it's defined: 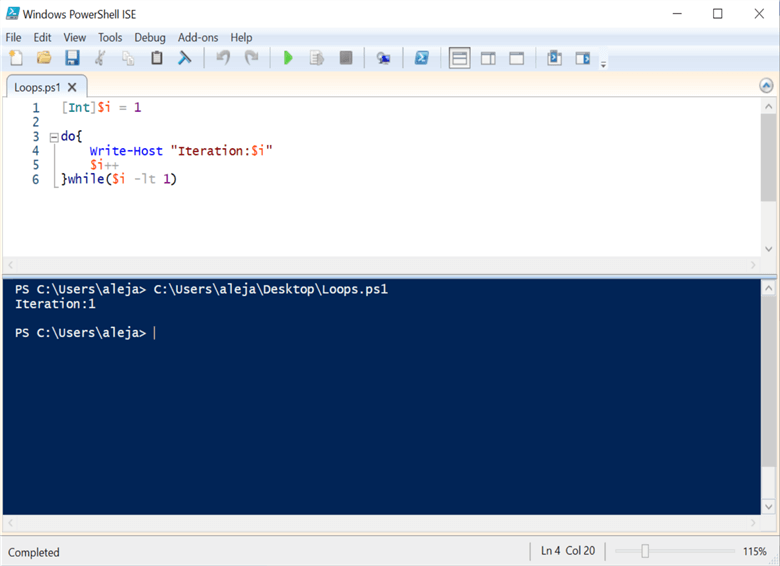 As you can see, the condition in the while is clearly false, but the block of code is executed at least once.

This one is very similar to the Do-While form, but with the slight difference that it will continue to iterate as long as the evaluating condition is false, basically it is the "negation" of the Do-While so to speak.

Here's how it's defined: 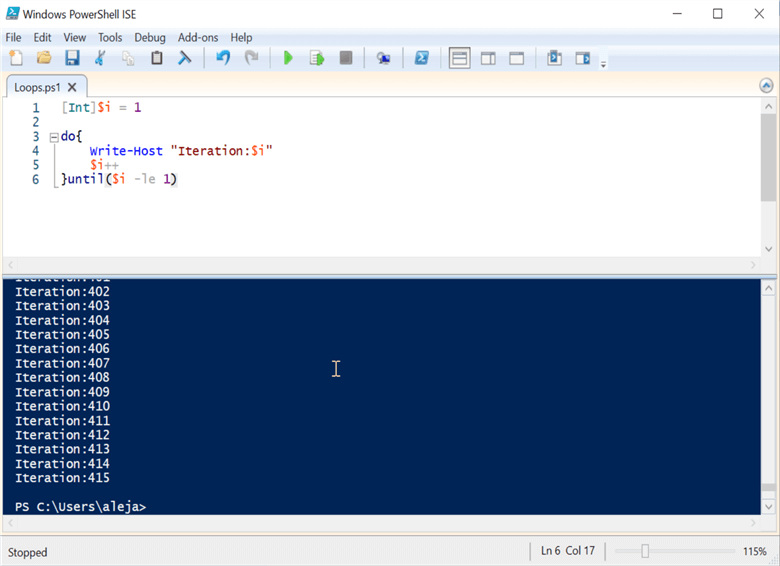 For this example, I've just swapped the word "while" with "until" to see what the script does. As you can see, I had to hit Ctrl+C to stop the execution of this script because it was going to run forever, because the condition was always going to be false.

Let's negate the condition to see if it stops: 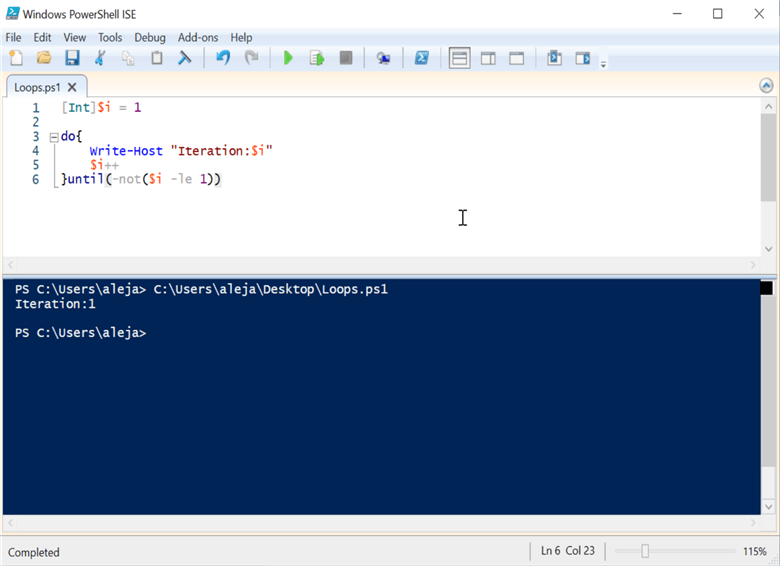 See, it behaved just as we expected! With this, I'm wrapping up the basic iterative code structures that will definitely be of great help when we reach a point in the series where we are able to craft scripts that work with data coming from a SQL Server database.