Moving forward with the PowerShell tutorial series, it is now time for me to present CMDLETs (pronounced as commandlet) and advanced functions. Personally, I think that CMDLETs are one of the key things that make PowerShell special, and we'll see in this tutorial how they can be used to solve problems and do cool stuff!

In this article, we will learn the basics of a cmdlet and take a look at examples to get a better grasp as well as a quick look at advanced functions.

Important note: I will be presenting all the examples using Windows, but these should work in any OS of your choosing where you can run PowerShell.

Let's take a look at what Microsoft's official documentation states about cmdlets:

"Cmdlets perform an action and typically return a Microsoft .NET object to the next command in the pipeline. A cmdlet is a single command that participates in the pipeline semantics of PowerShell. This includes binary (C#) cmdlets, advanced script functions, CDXML, and Workflows."

With that said, let's take a look at some examples to see cmdlets in action right away.

Let's use a very simple cmdlet "Get-Date", and see what we get:

A few takeaways from this very simple execution:

How can I specify parameters for a cmdlet? By specifying the -DisplayHint parameter and passing the value "Date" you'll get only the date part from the same output we got in the previous example.

Pretty straight forward right? Now, what if I want to store the output of a cmdlet and use it in my script, is it possible? Let's find out: 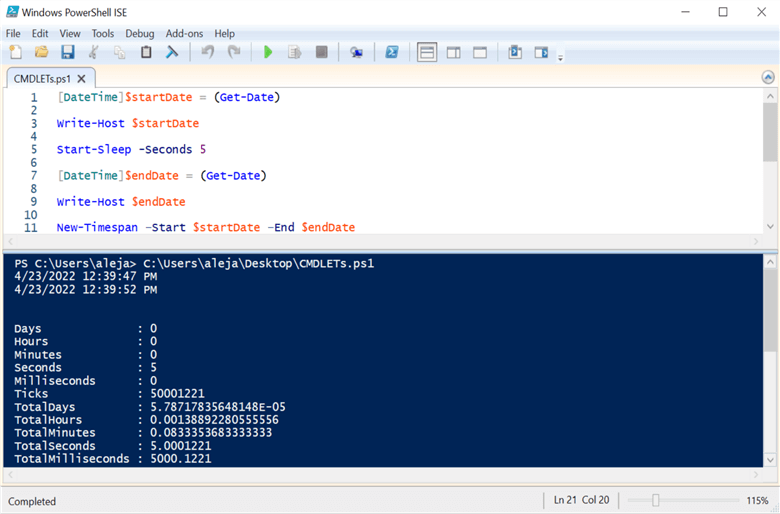 This particular example is quite interesting because there are several things going on:

So with that super-simple script, we learned that the output of a cmdlet can be stored in a variable, and that by throwing other cmdlets into the mix, you can create unique logic flows that will allow you to tackle the problem you have in front of you. By the way, if you want to know what cmdlets are available for you to use, simply run the "Get-Command" cmdlet and it will list all the ones available at your disposal; some will be there out-of-the-box, and some will be made available under certain conditions (e.g. by installing a certain module or by developing a function) which we will explore in a moment. 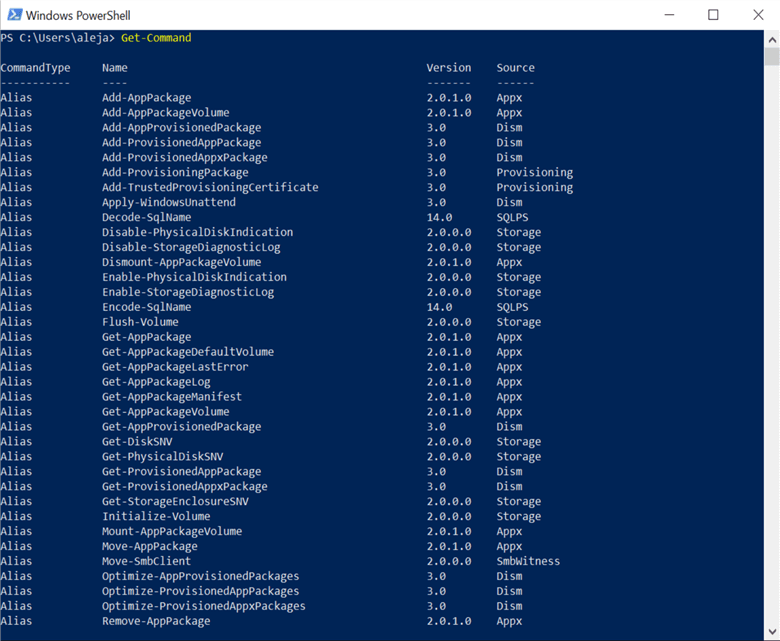 Ways to get CMDLETs at your disposal

There are several ways to get cmdlets.

Since this series of PowerShell articles are meant as a guide for the SQL Server DBA, let me address this by providing an example specifically for SQL Server. There are two modules for SQL Server, provided by Microsoft:

Important note: there will be cmdlets that won't work for all available flavors of SQL Server. For instance, you won't be able to use the "Stop-SqlInstance" cmdlet against a SQL managed instance.

Here's how you can install these modules: (note: make sure that you open the PowerShell console with admin rights or else it will fail). 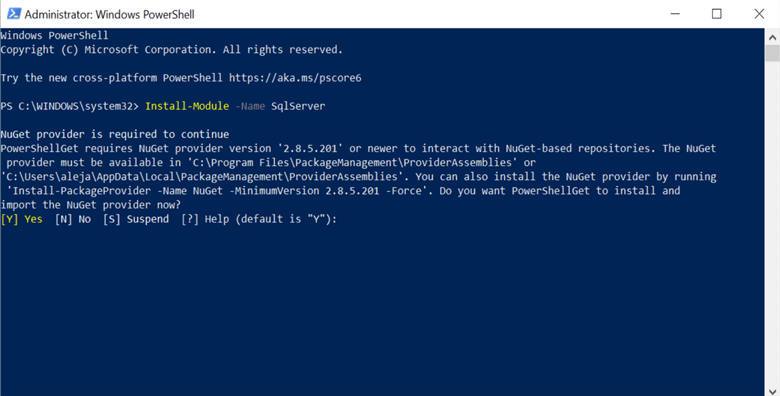 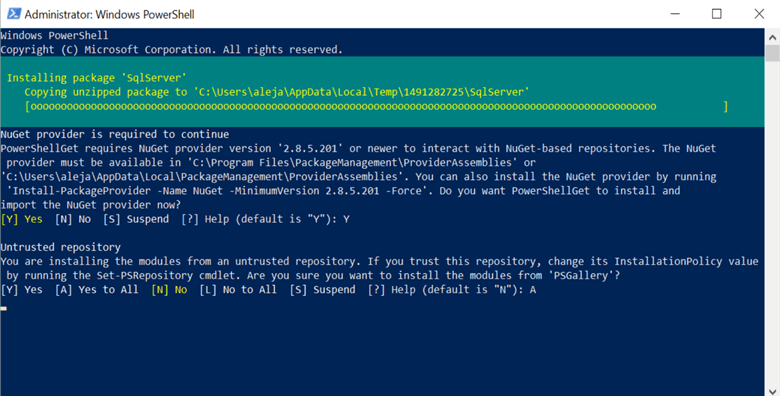 After the installation, you can confirm that it succeeded by typing "Get-Module SqlServer -ListAvailable". 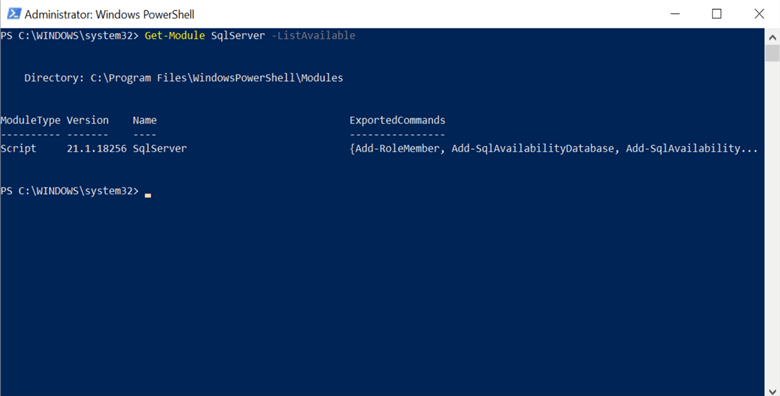 2 - Develop and Deploy a cmdlet

You can develop a cmdlet in C# or any other .NET language, and then you import it into your PowerShell session. I'm not going to expand on this particular section as it is not the main intent of the series. Regardless of that, I'd still like to leave you with some guidelines provided by Microsoft if you'd like to venture into the development of cmdlets.

The third option leads me to the other topic for this article, advanced functions. Yes, you can create functions in PowerShell that work exactly the same as cmdlets. But how are advanced functions different than the cmdlets from point 2? When you develop a cmdlet in a .NET language, it is compiled and a .dll is generated for you to import and use. With advanced functions, you skip the compilation part and develop a function that you can use right away within your scripts.

If you ask me which one I think is better, I'd say both have their own set of characteristics and it would be up to you to pick the one that you think suits better for what you are trying to accomplish.

A couple of key points to mention:

How can I create a PowerShell advanced function?

Let's take a look at a very simple example to get a feeling of what one looks like.

In my previous article, I talked about basic functions in PowerShell, so this looks pretty much the same. The main difference would be the "[CmdletBinding()]" attribute and the "Process" block.

The CmdletBinding attribute is similar to the CMDLET attribute that is used in compiled cmdlet classes, to identify the class as a cmdlet.

The process block is basically equivalent to the ProcessingRecord method that is used by compiled cmdlets to process the data that is passed to the cmdlet. 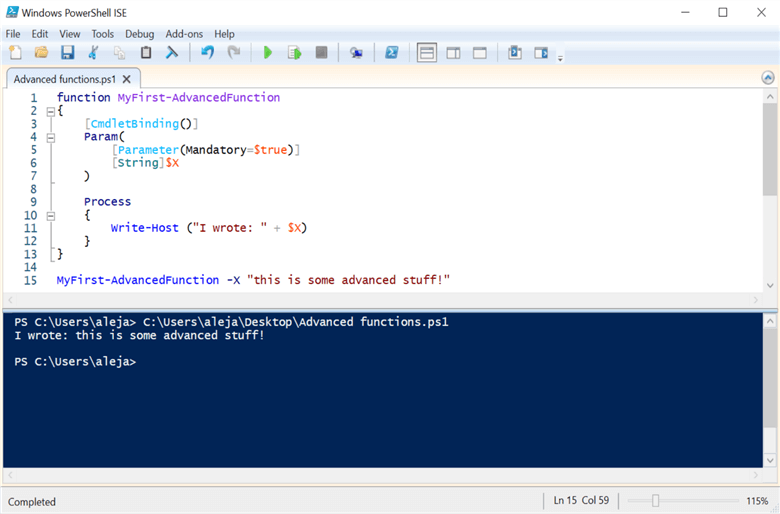 By creating advanced functions, PowerShell makes available a new set of properties that you can use for your function. You can get the detailed list on Microsoft's website if you'd like to learn more.