Build Your Own SQL Server Central Monitoring Solution with PowerShell

As a production DBA, I manage hundreds of SQL Server instances to meet business requirements. It is difficult to monitor these instances efficiently since there is limited support, and my company currently doesn't have the budget to invest in third-party monitoring software. Is there anything that can help me easily manage all of the SQL Server instances in my environment?

Automation with PowerShell may be the answer to your problem. Using what we've learned so far through this PowerShell series, it's possible to build scripts to help manage multiple SQL Server instances simultaneously. This approach will make your life easier by building custom automation for your specific needs.

There are a few assumptions to consider before we begin:

Setting Up the Initial Script

This initial script will act as the core script in which all the subsequent scripts can revolve. Of course, this is just one approach, feel free to build it in any way you think will work best for your situation. The main idea is that this initial script will return the list of SQL Server instances to connect to for a specific action.

For this article, let's keep it simple, the list of instances will be in a .txt file that the script will read and then return. As a best practice, keeping an updated list of SQL Server instances under your umbrella is highly recommended, a master server list, if you will.

The image below shows the sample instances .txt file:

As mentioned before, keeping it simple. Each row of elements, separated by a comma, depicts the following:

Now, here is the code for the core script:

In a nutshell, a mandatory parameter indicating the location of the instances file must be provided by the user. The file path is evaluated to determine if the file indeed exists. If it doesn't, the user will be notified, and the script will end its execution. If it exists, all the lines in the file will be returned.

Creation of Scripts for Specific Tasks

Now that a basic code script has been established, let's create a few specific sample scripts to help your particular needs.

Script to Connect to Each SQL Server Instance

Let's create a simple script to connect to all SQL Server instances to determine if there's any connectivity issue:

The first two lines pull the content from the core script and store the result in the $instances variable. From this point forward, I'll leave you to examine the code to flex those PowerShell skills a bit ;)

Below are screenshots of some execution samples made in my test environment:

Here's another sample script to perform another basic task. This script will retrieve the list of databases that are housed within each SQL Server instance.

Again, the first two lines pull the list of instances from the core script. Next, it will attempt to connect to each SQL Server instance, retrieve the database list, and display each database's current status.

Note: The $databases object contains even more data, allowing you to experiment.

Here's a sample screenshot from my environment: 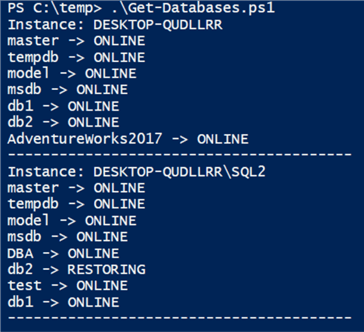 These sample scripts seem very basic, but by using the same principles discussed in this tip, you can begin to build custom automation for your specific needs.

Using these basic sample scripts as a starting point, you can continue to build scripts to help manage SQL Server instances and ultimately make your life easier.