I heard there are couple of enhancements in SQL Server 2012 for SSIS. What are these enhancements and how does improves the usability, productivity, manageability and performance?  Check out this tip to learn more.

In the first tip of the series, I am going to talk about some of the UI or usability changes which improves the productivity of a SSIS developer. For the new SSIS Project Deployment Model, refer to these tips:

Very often I had difficult a time creating SSIS packages.  Unfortunately, when I did something wrong and wanted to revert the last change, I was unable to do so.  It was very frustrating.   As an example, sometimes I unintentionally deleted a task, which I wanted to get back. At times, I had to revert back to the SSIS package version in the VSTF version store. This was all because we did not have any way to undo or redo our changes. Now with SQL Server 2012, we have this feature in the SSIS designer.

The designer now tracks all the actions that you perform, which you can see in the image above and below.  You have the ability to Undo or Redo as many actions as you want.

Now the components inside the toolbox have been placed in few more categories (Favorites and Common) for ease of use.  These categories are not fixed and you can customize it as per your need. For example, you can place all your frequently used components inside "Favorites" section which appears at the top of the Toolbox as shown below: 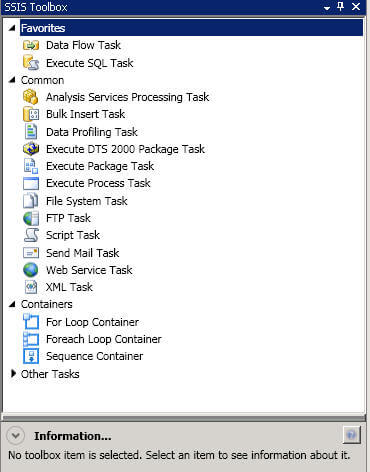 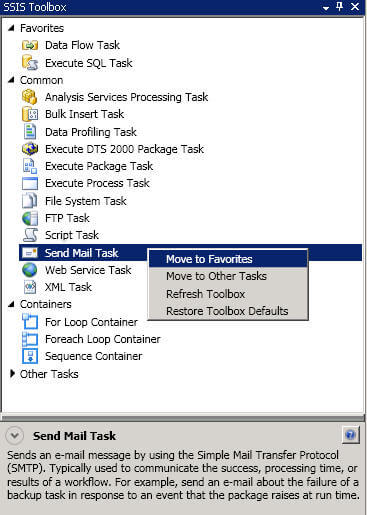 On a final note, one really good aspect of the enhanced toolbox is the information section on the bottom of the toolbox.  This area displays details about selected component and provides an option to directly jump to the documentation for that selected component. This is really useful for someone new to SSIS development and/or someone that does not have prior knowledge about the component.

When working with the SSIS designer, one of the first things that you will notice is the look and feel changes of the component placed on the designer area.  It looks more elegant as well as easy to maintain and align. 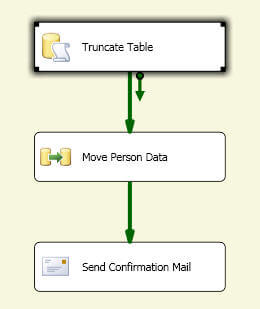 Although it was possible to zoom in/out in the designer surface area in earlier SSIS versions by holding the CTRL key and scrolling the mouse, there are some enhancements in SQL Server 2012.  In SQL Server 2012, the aforementioned zooming is supported as well as the addition of a scale on the right bottom of the designer with a vertical slider to zoom in/out on the surface area. There is also a button on bottom of the scale which you can use to fit all the content within the designer surface/window.  This setting will automatically adjust the size to make the objects fit on the screen.

There have been already couple of commands for formatting the layout of package's components. There is an addition to it for automatically resizing the selected components as shown in the image below. 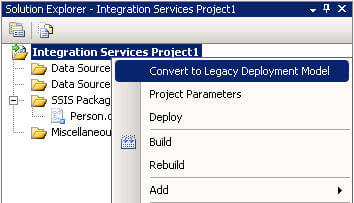 As previously indicated the new SSIS projects get created in the Project Deployment Model. When you right click on the project you will notice two more options. The "Project Parameters" let's you define the parameters in the project and the "Deploy" option let's you create the deployment package or deploy to the Integration Services Catalog database. 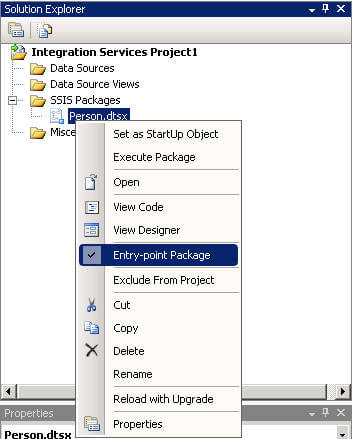