The -IncludeManagementTools switch of the Install-WindowsFeature cmdlet specifies installation of all applicable management tools for the installed role or feature. This includes the MMC snap-in and the Windows PowerShell module associated with it. And, as a reminder, be sure to run this on all of the servers that will act as nodes in your failover cluster. I, myself, forget sometimes.

The command above is similar to initiating the Windows Failover Cluster Validation Wizard and running all the tests - storage, network, inventory, cluster configuration, etc. The next steps prior to building your Windows Server Failover Cluster will depend on how you intend to use it - either for a Hyper-V cluster, for a SQL Server failover clustered instance or for Availability Groups. In my case, since I am using the Windows Server Failover Cluster with SQL Server 2012 AlwaysOn Availability Groups, the results produced storage and network warnings since I'll only be using local storage instead of clustered ones. For this case, I can choose to ignore those warnings. Note that this will also generate a Failover Cluster Validation report that you can use for documentation or as a checklist to address the issues reported. The MHT file will be generated on all of the servers that you have included in the cluster validation test and stored on the C:\Windows\Cluster\Reports folder or the %USERPROFILE%\AppData\Local folder as specified in the output of the Test-Cluster cmdlet.

To create the Windows Server Failover Cluster, we will use the New-Cluster cmdlet. We will pass the hostnames of the servers that will act as nodes in the failover cluster, the virtual server name and its corresponding virtual IP address.

Again, the switches that you use with the New-Cluster cmdlet will depend on the configuration of your Windows Server Failover Cluster. For example, if you intend to intend to use DHCP for your virtual IP address, you can remove the -StaticAddress switch, similar to the command below. This assumes that your network cards are configured with dynamic IP addresses.

If you plan on installing and configuring a SQL Server multi-subnet failover clustered instance similar to this tip or a multi-subnet SQL Server 2012 AlwaysOn Availability Group, you can specify multiple virtual IP addresses with the -StaticAddress switch, similar to the command below. In this example, we can have an Availability Group configuration that has 2 nodes in different subnets.

New in Windows Server 2012 is the ability to create a Windows Server Failover Cluster in an Active Directory organizational unit (OU) that is different than the ones that the cluster nodes are in. This feature made it easy for cluster administrators to create new Windows Server Failover Clusters in a restrictive Active Directory environment. The screenshot below shows how it looks when using the Create Cluster Wizard. This will create the cluster in the Clusters OU in the TESTDOMAIN.local domain. Once the Windows Server Failover Cluster has been created, you can use the Get-Cluster cmdlet to display the information and configuration of your newly created cluster. I'm using the Format-List cmdlet to display all of the properties of the cluster. 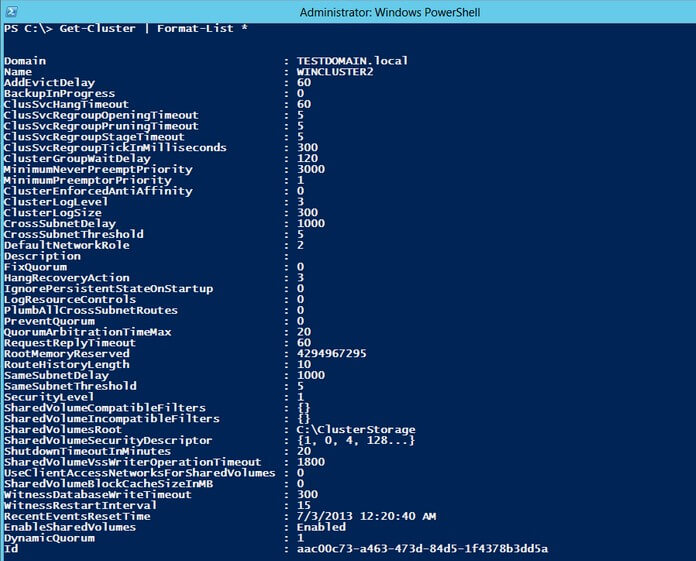 We can then use the Get-ClusterResource cmdlet to display all of the cluster resources available in the cluster. Since we haven't installed and configured any cluster resources yet, the only ones we will see are the virtual server name and virtual IP address of the Windows Server Failover Cluster.

If you have clustered storage configured, you will see those as well in your newly created failover cluster.