When more than one numeric SQL Server data type may be suitable for a field in a project, which data type should I choose? What implications might the choice of a data type have for storage and performance in SQL Server?

SQL Server has nine different data types for storing numeric information, but they have differences that may make them more or less suitable for different uses. Clearly, if you need to store a decimal value than the INT data type is inappropriate. Similarly, you would use DECIMAL or NUMERIC, instead of REAL, if you wanted to store an exact value since REAL stores an approximate value.

But there are times when there is more than one data type which could hold the values needed. For instance, BIGINT or DECIMAL with its default values could almost always be used in place of INT. However, there are performance and size reasons to generally prefer the smaller data type. To look at this let us create three tables with 150 million rows and give them primary keys, but no other indexes. One will use INT, the other BIGINT, and the final one will use DECIMAL.

I set up a Python script to time a number of different possible operations on each of these tables. Each test was run 50 times with the results averaged. For instance, I had the server return a simple row count. In another test, I selected 100 values arbitrarily and then had the server return the rows with those values in the primary key. 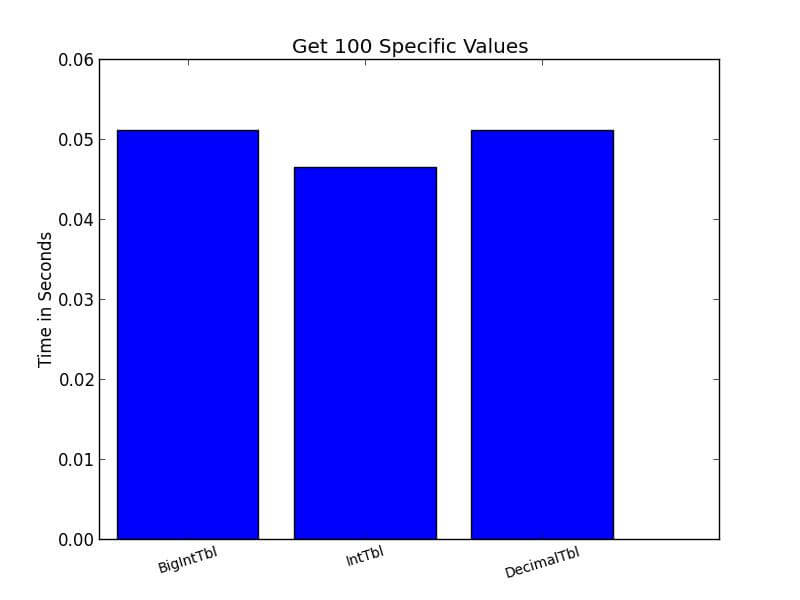 I also ran several other tests that aren't displayed to preserve space. In each of these tests, the table using DECIMAL came out substantially worse than the tables using INT and BIGINT. The picture with INT and BIGINT was much less clear and less consistent. The differences were often small between IntTbl and BigIntTbl. BigIntTbl occasionally outperformed IntTbl. But in most situations, INT came out slightly faster than BIGINT.

The results on the space used were perfectly clear. We can see this by running sp_spaceused against each of the tables. Although all three tables hold exactly the same data, the BigIntTbl is more than 60% larger than IntTbl, and DecimalTbl is larger still. To be clear, at this point each table has a clustered index, but no nonclustered indexes.

We can then use SYS.DM_DB_PARTITION_STATS to get an approximate size for the indexes.

In conclusion, the data type chosen to hold numeric data has substantial impact on the speed of some operations, the space used by the table, and the space used by the indexes. While the data type always needs to accommodate the range of values expected for a field, including possible future growth, noticeable savings in space and execution time can be gained when the smaller, more efficient data type is chosen.

How to get length of Text, NText and Image columns in SQL Server