You are developing a SQL Server application and at some point in your code you receive the error "String or binary data would be truncated". After digging into the code you discovered that this error message is caused because a table has a VARCHAR(1000) column and you need to insert more than 1000 characters. Someone on your team suggest using the VARCHAR(max) data type, but you are unsure about the implications of the this data type.  Read this tip to learn what you should know about the SQL Server VARCHAR(Max) vs. VARCHAR(n) data types.

In order to decide between using VARCHAR(Max) or VARCHAR(n) we have to understand that even when both data types look the same, they have some major differences pertaining to storage, behavior and of course their intended usage.

The VARCHAR(Max) as well as NVARCHAR(max) and VARBINARY(max) data types were first introduced in SQL Server 2005 to replace the large object (LOB) data types TEXT, NTEXT and IMAGE respectively. All of these data types can store up to 2GB of data except NVARCHAR(max) that can store 1GB of Unicode text. As you may guess, the maximum storage for these data types is the same as the ones being replaced. I suggest reading the SQL Server differences of char, nchar, varchar and nvarchar data types tip in case you need a further explanation on the differences between VARCHAR and NVARCHAR data types.

A common question amongst beginners is: if the VARCHAR(max) data type can store up to 2GB why can't we declare a column or variable of type VARCHAR(10000)? Why are we limited to either declare a VARCHAR(8000) or VARCHAR(max)? The reason behind this is that VARCHAR(n) is intended to store the data in the row page. SQL Server stores data in 8KB pages (8,192 bytes), but the page header occupies the first 96 bytes of each data page leaving 8,096 bytes for data, row overhead, and row offsets, that’s why you cannot declare a value greater than VARCHAR(8000).

The following list includes the functions that support the VARCHAR(max) data type:

Let’s create a new database to do some testing.

On the Sales database create a table named Transactions to store sales information.

The following script will create a test table with one VARCHAR(Max) column and an identity column, and then insert one row with 1,000,000 characters.

As you can see on the next image the data was appended and the string length was increased. 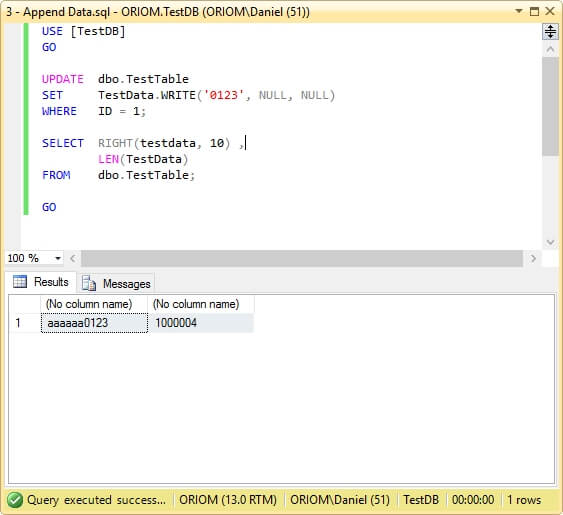