SQL Server 2016 has been released to General Availability (GA) in June 2016. This release comes packed with dozens of new features and capabilities, and Integration Services (SSIS) is no exception. This tip aims to give you an overview of all those changes. Some tips have been written already detailing some of those new features. If applicable, references to earlier tips will be provided. If there were any changes, updates or bug fixes released in SQL Server 2016 previews after the publication of the corresponding tip, these will be mentioned as well.

Here are a few things that are new in SQL Server 2016 Integration Services.

To enable AlwaysOn on the SSIS catalog, you need to follow these steps:

For more information: Always On for SSIS Catalog (SSISDB).

There's also a new role ssis_monitor in the SSISDB database for supporting AlwaysOn. It's intended for internal use only.

In SQL Server 2012 the project deployment model was introduced for Integration Services. In this deployment model, you could only deploy an entire project - along with all of its packages - to the SSIS Catalog. This made maintenance and versioning a bit harder on the SSIS projects. A tight integration with a source control solution, like Team Foundation Server, was necessary to keep track of the changes and to make sure you deployed the correct version of the packages to the Catalog. In SSIS 2016 however, it's possible again to deploy individual packages, which makes deployments a lot easier, especially for bug fixes.

You can find more information in the tip SQL Server Integration Services 2016 Incremental Package Deployment. When the tip was published, SQL Server Data Tools for SQL Server 2016 (aka Visual Studio 2015) was not yet released. The tip only has screenshots when you use the SSIS Deployment Wizard. Now you can also deploy individual packages by selecting them in the Solution Explorer of Visual Studio, right-clicking them and choosing Deploy Package.

Always Encrypted is a new feature of the database engine to easily encrypt one or more columns of a table. For an introduction to this feature, check out the tip SQL Server 2016 Always Encrypted. The support by SSIS is described in the following three tips:

In the SSIS catalog, a lot of information about the execution of the packages is automatically logged. There are a set of built-in reports helping you to find detailed logging results about those executions. However, in earlier versions you needed to be an SSIS admin in order to view the data inside the reports. If not, the reports would remain empty.

When users are added to the new ssis_logreader database role, they can also view the reports with data without being an administrator. 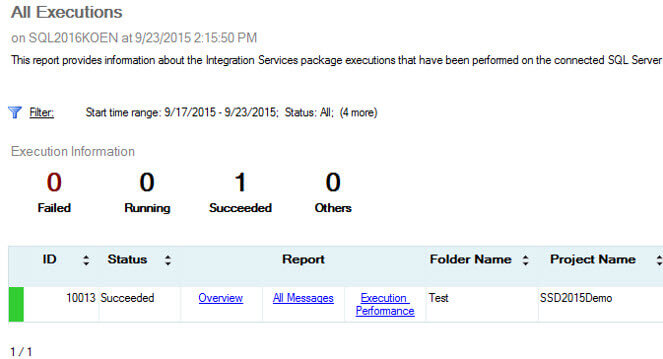 Inside the SSIS Catalog, a logging level dictates exactly which events and statistics are logged when a package is running. A new logging level has been introduced: RuntimeLineage. There's not much information available about those logging level. It's most likely added to support a future lineage tracking capability.

One of my favorite new features however is the ability to create your own custom logging level. If you're for example interested in errors and warnings only, you can add only the OnError and OnWarning event to a logging level, which makes the logging extremely efficient. You can find more information about custom logging levels and the RuntimeLineage logging level in the tip Integration Services Logging Levels in SQL Server 2016. A new capability was added after the tip was published (much to my delight): the ability to set a custom logging level as the server default. This allows you to drastically minimize the events being logged and thus optimize the performance and size of SSISDB.

It needs to be replaced with the following two lines of code:

Not only is this new functionality added to the script component, but at several other places as well:

The tip SQL Server Integration Services 2016 Control Flow Templates Introduction showed how you can build a control flow (data flow optionally included) which you could then save as a separate object. It was then possible to insert this object directly on other packages by selecting it from the SSIS Toolbox. This promotes reuse of SSIS functionality, especially for pieces of logic that are always almost exactly the same in every package. In the tip I mentioned that "template" was not an ideal name, as there's little flexibility in changing the object once it was inserted in a package. But the SSIS team has renamed this functionality to control flow parts, which is a much better name as it clearly indicates the purpose of this feature. As a result of this name change, the file extension of a control flow part has changed from .dtst to .dtsp.

Integration Services 2016 comes packed with a lot of new features and capabilities. In part 1 of this tip, an overview is given of these enhancements. Notable features are the custom logging levels, control flow parts and the ability to deploy individual packages again. In part 2, we'll finish the overview with the remainder of the new enhancements.