SQL Server 2016 has been released to General Availability (GA) at the first of June 2016. This release comes packed with dozens of new features and capabilities, and Integration Services (SSIS) is no exception. In the first part of this tip series, some new features have already been discussed, such as control flow parts, custom logging levels and incremental deployment. However, the overview is not finished yet. The second part will detail even more new enhancements and capabilities of SSIS 2016.

AutoAdjustBufferSize in the SSIS Data Flow

The data flow has a new property: AutoAdjustBufferSize. Previously, the sizing of the data flow buffers had to be done manually through the DefaultBufferMaxBufferRows and DefaultBufferSize properties. Both properties have undersized defaults for today's powerful servers (10,000 rows and 10MB respectively). In order to get good performance of the data flow, you always had to tweak those parameters. Those days are now over. You just set AutoAdjustBufferSize to True - the default is regrettably set to False - and you let the data flow itself handle the performance.

A feature that has long been awaited is the ability to develop SSIS packages for multiple versions of SSIS using one single installation of the SQL Server Data Tools (SSDT). Previously, each release of SQL Server came with its own Visual Studio shell. If you had multiple SSIS versions in your environment, it meant you had to install multiple versions of SSDT. Now you need to install only the latest version of SSDT (Visual Studio 2015). In the project properties, you can choose for which version of SSIS you are developing: 2012, 2014 or 2016. 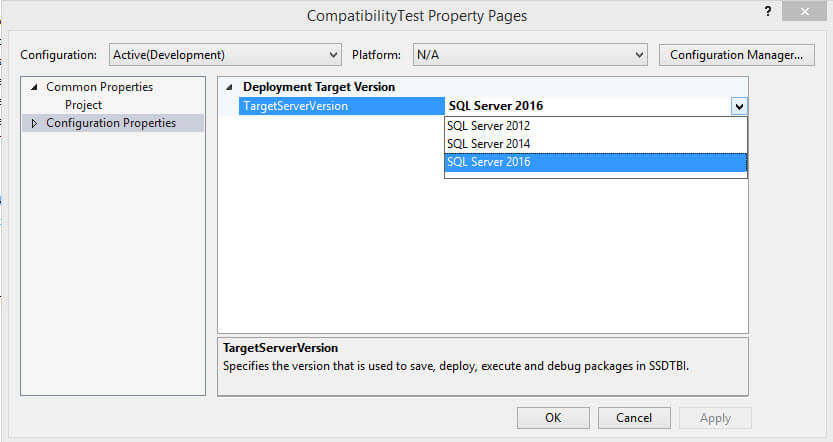 For more information: Backwards Compatibility in SQL Server Data Tools for Integration Services. Furthermore, with this release of SSDT, the database development tools are also included, so is one single product to manage both your database projects and your business intelligence projects (SSIS, SSAS and SSRS).

In Integration Services 2016, the number of supported connections has greatly increased and some existing ones have been improved.

There are several minor enhancements to Integration Services as well.

Integration Services 2016 comes packed with a lot of new features and capabilities. In part 1 of this tip series, an overview is given of several enhancements. Part 2 discussed other improvements, such as the AutoAdjustBufferSize property, backwards compatibility and several connectivity enhancements for the cloud and big data.