Copying data from a table in one instance to a table in another instance is a common task. You could do this with T-SQL and a Linked Server, but what if you can't use a Linked Server. To make it more difficult, say I have three servers: A, B, C and I want to copy data from a table on A to a table on B by running a T-SQL script on C, how can I do that?

There are many ways one can copy data across instances, the most common are:

These methods all have their pros and cons. To answer the question of copying tables between different instances by running a T-SQL on a separate centralized instance without Linked Servers, the only alternative way is to use an SSIS Package and create a SQL Server Agent Job to execute it, but this is tedious in both implementation and maintenance.

With R integration in SQL Server 2016, this difficult question has a perfect solution now.

SQL Server R service has included a default R package RevoScaleR, which contains lots of functions that are helpful for loading data from various sources, such as the following:

We will see how we can use these to solve our problem.

On [localhost], I will create a simple table and populate it with a few records

On the target instance, we set up the destination table.

The coded needed is relatively simple as shown below:

After running the script in a SSMS query window, we will see the following:

In [localhost\sql2014], we can see that 3 records have been copied from the source table. 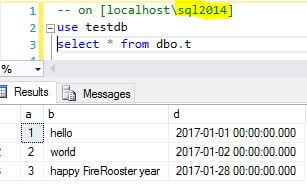 R integration with SQL Server is still in its early stages, so there is no surprise there were lots of limitations during my research.

There is one specific feature I like most about RxDataStep. In this function, there is a parameter overwrite, if it is set to True, the function can automatically create a target table if it is not there.  This is very helpful when we want to just load data into the target instance as staging tables, which we do not need to create beforehand.

In this tip, we explored a way to copy table data across different SQL instances by running pure T-SQL on a central server, and this tip can be easily customized to do other types of data loading, such as reading CSV file, Excel file, or any ODBC accessible data sources and then writing to destination. In some way, this can be considered a T-SQL command line version of some of the SSIS features.

With T-SQL as a hosting language for R (hopefully Python or others in vNext SQL Server), T-SQL may be more than just a language, it could be a platform.

Although the R language is mainly for data science work, it still brings lots of benefits to DBAs. In some way, it opens up another dimension for database administration and makes some previously tedious easier and some impossible tasks possible.