We are planning to migrate our SQL Server databases to Amazon RDS. Currently we are hosting them on-premises (or on Amazon EC2 or Azure). What’s the best way to migrate them?

Or, we have a number of databases in our RDS SQL Server instances. We want to backup these databases separately and keep them accessible for more than 35 days. We want to restore any database from its last backup without restoring the whole instance. How can I do that?

Or, we need to backup our production SQL Server database in RDS and restore it in a different environment. Is there any simple way to do this?

In a series of tips on MSSQLTips a few years ago, we talked about Amazon RDS: the managed relational database platform from Amazon Web Service (AWS). In one of the tips of the series we talked about how to backup and restore RDS instances. We showed how RDS can automatically backup instances with a few simple configuration changes and how we can create ad-hoc snapshots for the instance.

These options are still available and still used in production systems worldwide. However, RDS has a come a long way since we published the post in 2014. One improvement has been the SQL Server native backup and restore feature where individual databases can be backed up and restored separately instead of the whole instance.

Amazon added this feature to RDS in 2016 and since then it has addressed a number of customer use-cases:

In this tip we will show how you can backup individual databases from a SQL Server instance and restore them in Amazon RDS. You can follow the same technique for databases hosted on-premises or in the cloud (Amazon EC2 or other cloud providers). We will then see how to backup the databases from RDS into Amazon S3, a durable storage service from Amazon Web Service (AWS). We will also ensure the backup is encrypted with a key so it’s secured.

As you can understand, this is a tutorial for DBAs and system administrators who have at least some degree of familiarity with the Amazon cloud platform. We will assume you have some knowledge about:

For our use case we will create an Amazon EC2 instance running a SQL Server 2014 instance. This instance will be running a copy of the AdventureWorks database.

We will also create a SQL Server 2014 RDS instance and migrate the AdventureWorks database there.

To make this work, we will create an S3 bucket which will be accessible from both the RDS instance and the EC2 server. The SQL Server in EC2 would backup its database as usual and we will copy the backup to the S3 bucket. The RDS instance will then restore the backup from this same bucket. As we mentioned before, the steps should be similar for on-premises databases: all you have to do is copy the backup file to the S3 bucket.

Once the database goes “live” in RDS, we would want to back it up regularly. We will create a simple SQL Server job in the RDS instance which will back up the database to the same bucket once every night. Each backup will have a date/time stamp and will be encrypted. Once a backup is more than six months old, it will be moved to Amazon Glacier, a low-cost archival storage solution from Amazon. That way, we will ensure backups are both secured and retained for long time.

To let RDS access the S3 bucket, it will need to assume an IAM (Identity and Access Management) role with correct permissions.  It will also need to use a key to encrypt backup files. The key will be generated, hosted and managed by Amazon Key Management Service (KMS).

We will start by creating the S3 bucket. In the image below, we are creating an S3 bucket in the us-east-1 (North Virginia) region called “rds-sqlserver-backup-bucket”. Since bucket names are unique across all AWS accounts, you can’t use this bucket name in this region. 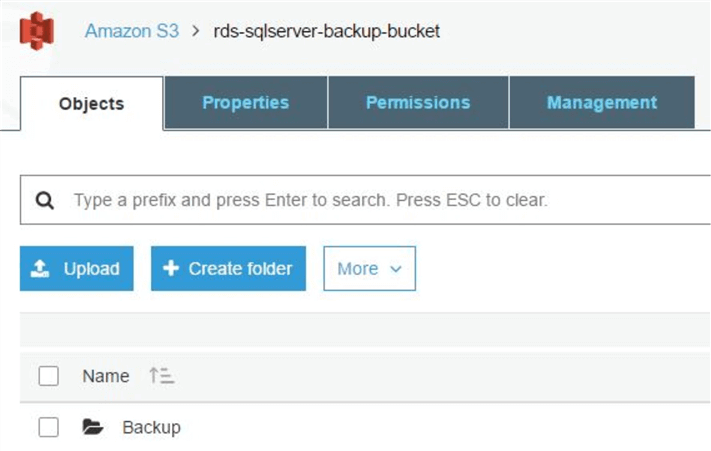 The bucket has a folder in it called “Backup” which will hold scheduled database backups from RDS. We are also using a lifecycle policy for the bucket. The policy enables bucket contents older than six months to be moved off to Amazon Glacier: 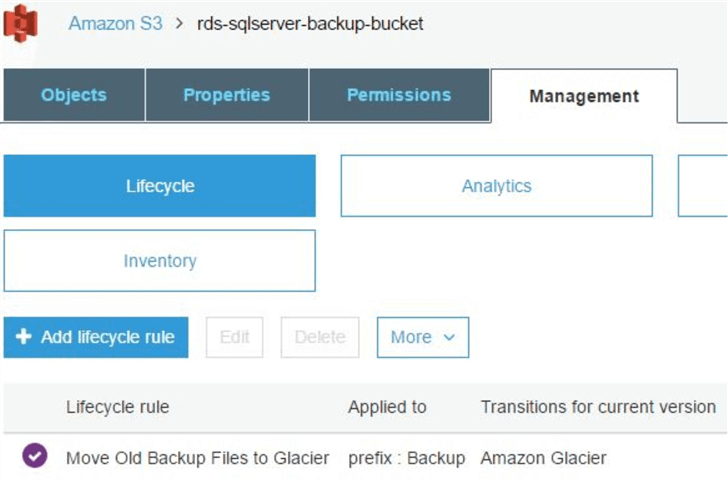 Next, we will create an Amazon KMS key to encrypt SQL Server backup files. This key is managed by Amazon and will be rotated once every year:

For our source system, we will create an EC2 instance running SQL Server 2014. Like the S3 bucket and the KMS key, the EC2 instance is created in the us-east-1 region. A copy of the AdvenstureWorks2014 database is restored there. 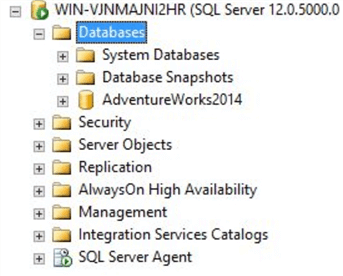 We will now backup the AdventureWorks2014 database from this machine and copy it to the S3 bucket we created before. There are few ways we can do this:

The first method is not considered secured, but for simplicity’s sake we followed it and copied the backup file to the S3 bucket: 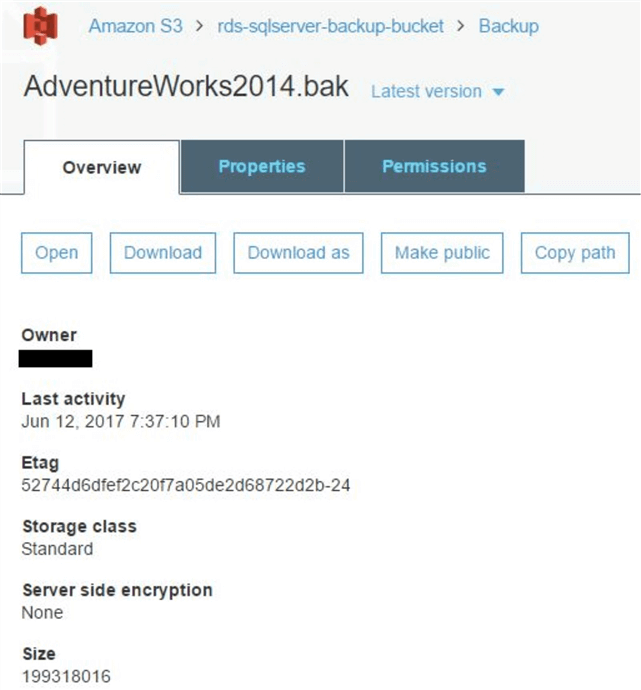 As we can see, the option group we are using for the database instance is called rds-optiongroup-sql2014. Its properties are shown here:

The option group does not have any special options enabled at the moment. This will be the case for RDS SQL Servers not configured for native backup and restore. To enable native SQL backup and restore, we will have to add a specific option to this group. This option is called SQLSERVER_BACKUP_RESTORE. This is a special built-in option from Amazon RDS and allows a SQL Server RDS instance to access an S3 bucket and perform backup and restore from there. It also enables the instance to encrypt its backups with a KMS key.

In the screen that comes up, there will be a few fields. In this case: 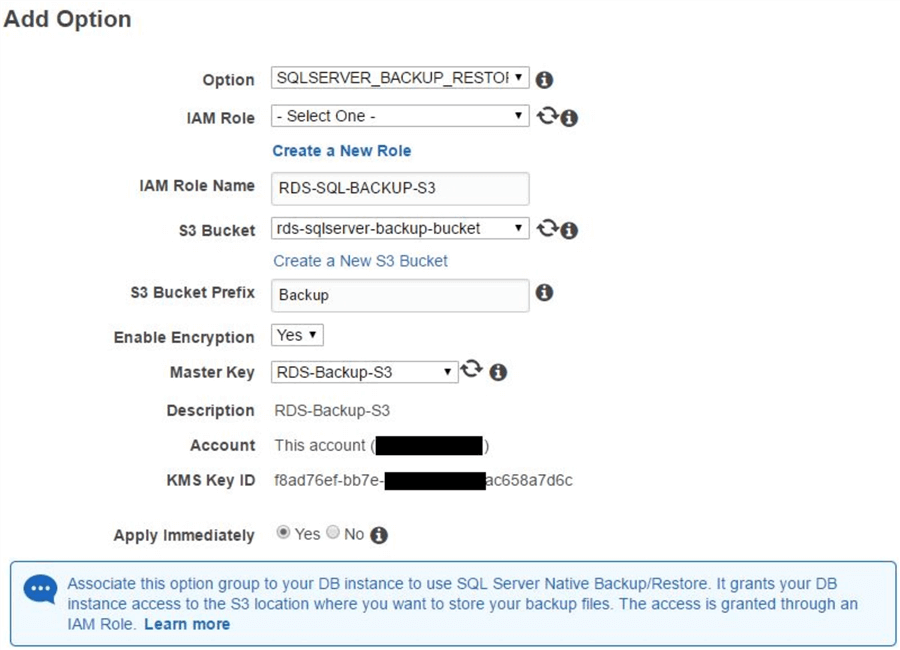 Once the values are chosen, we can save the option by clicking on the “Add Option” button. You can see the option group now has the new option added: 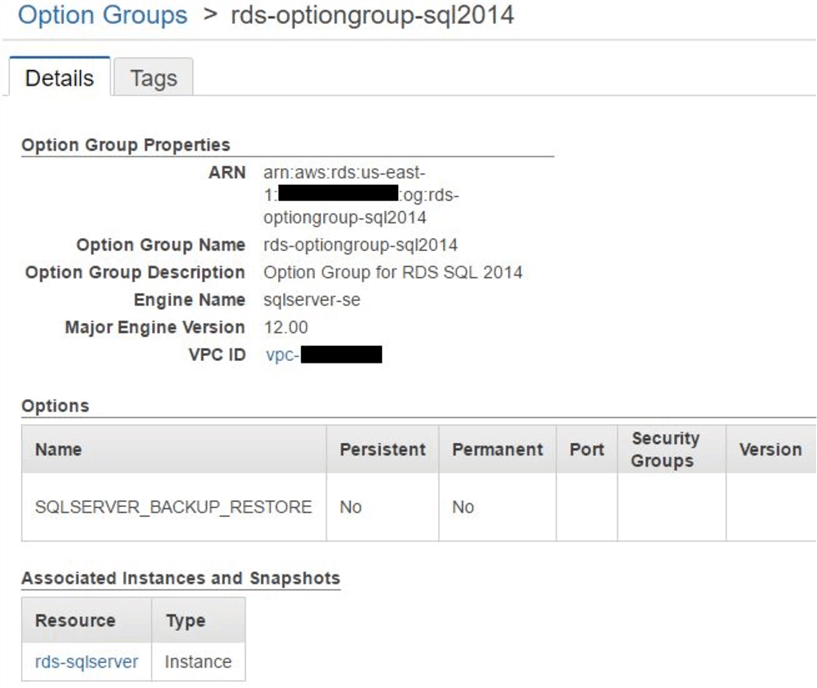 For the more advanced user, if you are interested to see what permissions the IAM role “RDS-SQL-BACKUP-S3” has, you can check its policy from the IAM console. This is what it looks like:

Now that we have the infrastructure set up, it’s time to restore the database backup from the S3 bucket. Amazon RDS for SQL Server offers two different stored procedures for backup and restore:

Once you start a backup or restore process, you can track their progress or cancel it:

All these stored procedures are shipped by Amazon as part of the SQL Server msdb database.

As the image shows, we have logged into our RDS instance as the RDS master user (we created the master user as “sa”):

Note the parameters supplied to the stored procedure. We have to specify:

SQL Server will start off a restore task and assign it a task ID:

We can easily track the status of the task with this command:

We can keep running this command to check the status of the restore task. The “lifecycle” column of the output will change to reflect the status which can be any of these:

The AdventureWorks2014 database is now in our RDS instance:

If enabled, RDS can create instance-level snapshots once every day. As long as the instance is running, a snapshot can be restored as another new instance (RDS does not allow the instance to be overwritten). The restore point can be within five minutes of any point-in-time in the last 35 days. This is a built-in feature of RDS. However, the instance backups are deleted when the instance itself is terminated. To protect against this, RDS will warn us to create one last manual snapshot before the instance is deleted.

Typically businesses would want their database backups available longer than 35 days. And once again, S3 can be an excellent solution for this. In the following code snippet we are creating a stored procedure to natively backup all user databases in a SQL Server RDS instance. It will encrypt the backups with a KMS key and copy them to a bucket. The backup file names will be unique with a date and timestamp.

The sensitive information in the code has been redacted for obvious reasons.

Note the rds_backup_database stored procedure being called in this script and the parameters being passed. We don’t have to specify the “KMS_master_key_arn” parameter if no encryption is needed.

Once the stored procedure runs, we can track the progress of the backups using the rds_task_status stored procedure. In this case we do not have to specify any specific task_id, because there will be multiple tasks generated: one per database backup.

We have now created an automated backup routine using the SQL Server RDS built-in commands. This can be scheduled from a SQL Server Agent job which can run once every night. However, the job itself will succeed every time it runs, because all it does is call a stored procedure. The actual backup processes are not tracked in the stored procedure.

To track the backup success or failure we can build an extra bit of logic into another job which will check the task outcomes of the last submitted batch of tasks.  If any of the tasks is in “ERROR” status, the code can raise an error.

Before we finish, let’s talk about backup compression. Although with S3, storage is not an issue anymore, you can still compress your backups before sending them through to S3. To enable backup compression, you need to run a special stored procedure. The following command shows how it’s enabled:

Note the stored procedure is located in the “rdsadmin” which is a system database that Amazon ships with SQL Server in RDS.

In this article we saw a much-awaited feature of SQL Server in Amazon RDS. Although it seems fairly trivial to get up and running native backup and restore, there are some caveats to it and we will talk about those in the next part of the series.