Every cloud provider has a serverless interactive query service that uses standard SQL for data analysis. As for the biggest cloud providers, we have Azure Data Lake analytics, Google BigQuery and AWS Athena. Due to the fact that my company is using only AWS, I am greatly enjoying the AWS Athena service - I must say that it is awesome.

The Athena service is built on the top of Presto, distributed SQL engine and also uses Apache Hive to create, alter and drop tables. You can run ANSI SQL statements in the Athena query editor, either launching it from the AWS web services UI, AWS APIs or accessing it as an ODBC data source. You can run complex joins, use window/analytical functions and many other great SQL language features. In several cases, using the Athena service, eliminates need for ETL because it projects your schema on the data files at the time of the query.

I will show you how you can use SQL Server Management Studio or any stored procedure to query the data using AWS Athena, data which is stored in a csv file, located on S3 storage. I am using a CSV file format as an example in this tip, although using a columnar format called PARQUET is faster.

I am going to: 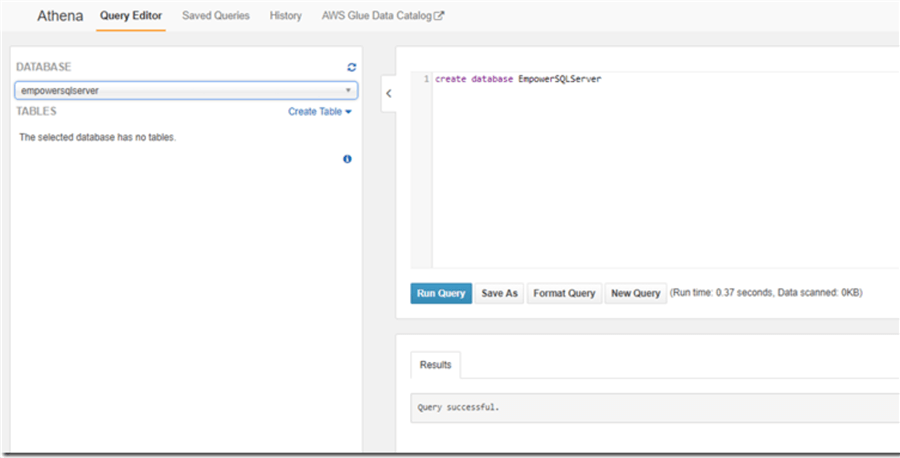 As a next step I will put this csv file on S3. By the way, Athena supports JSON format, tsv, csv, PARQUET and AVRO formats.

Uploading the below file to S3 bucket (don’t put a column header in the file): 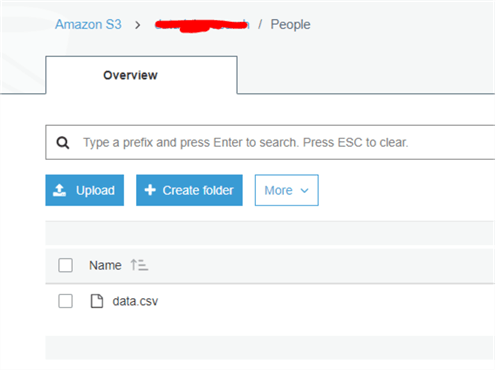 As a next step, I will go back to Athena, to create an external table over in the S3 folder. You can later add as many files as you want to the same folder and your queries will return the new data immediately, just make sure they follow the same order of columns. If in some file you want to add more columns, you will need to alter the Athena table schema definition and the query will return "NULL" values for the files that do not have new columns. 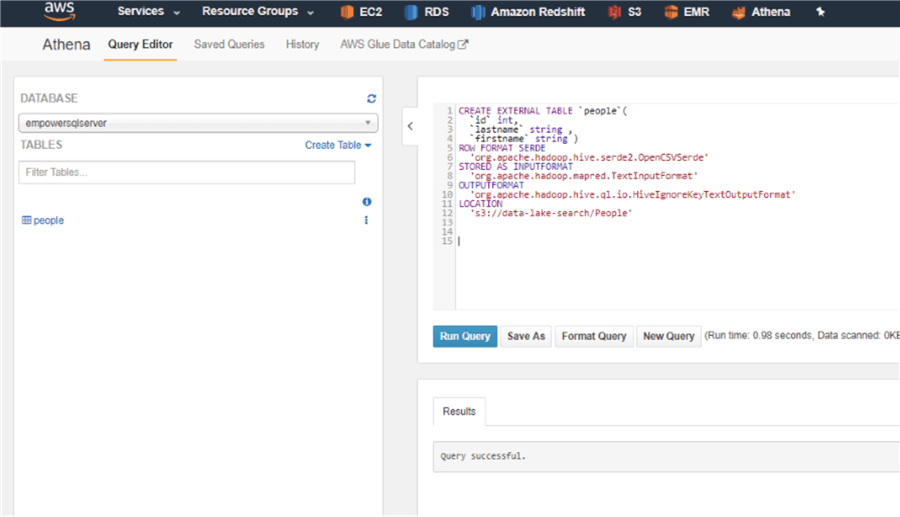 Now I can query the data through the AWS Athena UI:

As a next step I will set up a linked server from my SQL Server instance because I would like to offload the big data querying to AWS Athena. Of course, I am using this tiny example data file, but in real life we are querying sometimes 300GB data file in a single query and the query takes just a few seconds.

Athena has an ODBC driver; I will install it on a SQL Server machine (AWS EC2 instance for this example).

Here is an installation link: https://s3.amazonaws.com/athena-downloads/drivers/ODBC/Windows/Simba+Athena+1.0+64-bit.msi.

Set up the ODBC connection. Important, click on the Authentication Option and fill in the AccessKey and SecretKey that have permissions to access the S3 bucket. The S3 output location below will hold the csv files with results from your queries. Remember to clean up the output files from time to time. 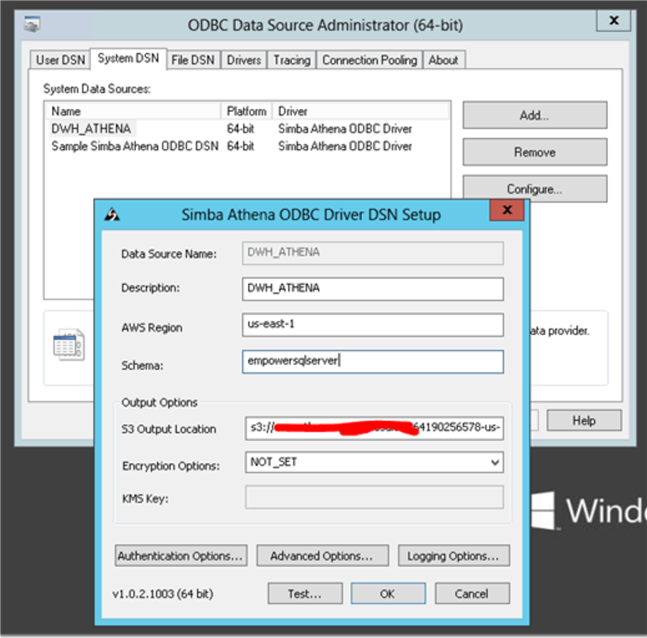 What is left, is to set up Linked Server inside Management Studio using OLEDB provider for ODBC.

Replace @rmtuser and @rmtpassword with the AWS access key and secret key and now we can query the data files from any script or stored procedure.

There is one very important thing that you need to know. Regular SQL Server ODBC destinations query behavior is to send "select *" to a linked server and do filtering inside SQL Server. This is very bad for us since we want to offload all work to Athena and we do not want to retrieve all table data. The way to overcome this is to use OPENQUERY.

Here is example of the query that is using a linked server. The remote query has omitted filtering and receiving ALL columns from the remote table and the filter is being applied later on, inside the "Filter" step. 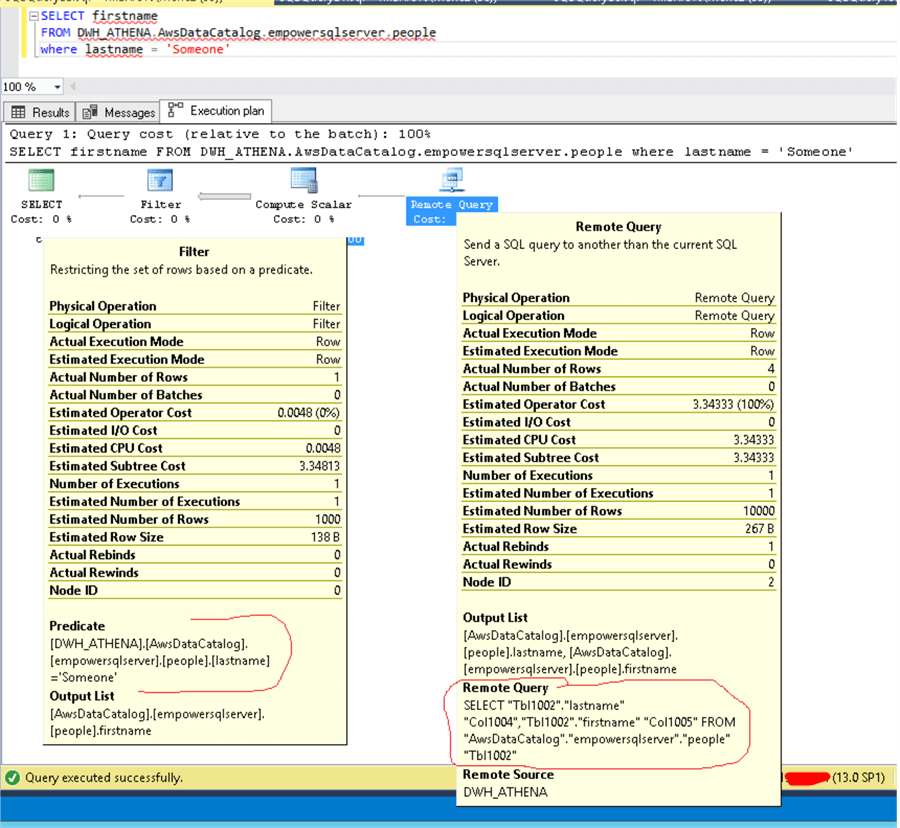 The same query is using OPENQUERY instead of a linked server: 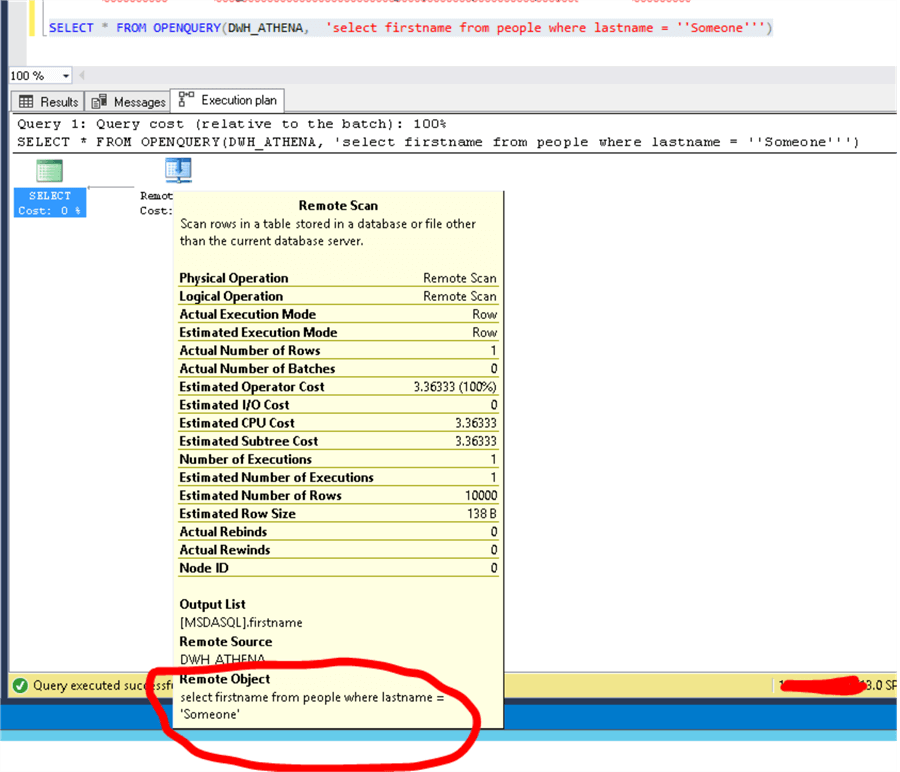 Isn’t it wonderful to be able to keep the row data in files and query them with minimal effort from SQL Server!

Maria Zakourdaev has been working with SQL Server for more than 20 years. She is also managing other database technologies such as MySQL, PostgreSQL, Redis, RedShift, CouchBase and ElasticSearch.