In this tip we’re going describe what parallelism is, the benefits, and how to take advantage of parallelism in SQL Server with some examples.

To define parallelism, there are some basic concepts we need to define:

Parallelism can be defined as achieving better throughput by the execution of multiple threads at the same time or the automation of tasks. It is achieved by keeping the hardware busy using a lot of threads, processing multiple items per thread, and/or performing multiple operations with the same data already in memory. By keeping the hardware busy, threads spend less time waiting on a resource that is unavailable at that moment and being forced to switch context. This is better explained in the article fully utilize all bottlenecks, from where the image below is from: 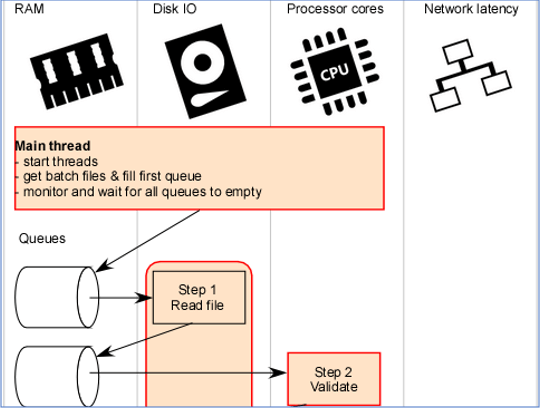 The benefits of implementing parallelism are:

Note that parallelism is helpful for people in all IT levels:

For the operations performed inside the SQL Server engine, you must take a look at how to set the cost threshold for parallelism and the max degree of parallelism, as they may be preventing you from using parallelism. The default value of is 5, but Microsoft suggests changing it to 50 and then adjust as needed. Here is a calculator that can tell you the recommended value for MAXDOP, and here is an example on how to run a query in parallel in the engine.

Below are example query plans where one is run in parallel and the other is not.

For the number of simultaneous requests sent to SQL Server instance, please note that in T-SQL you can’t create multiple threads (which is a limitation of the language) even when SQL Server can handle multiple requests in parallel, but this is doable. Here are some examples on how to do it from PowerShell, Reporting Services and Integration Services.

Below is an example in PowerShell where multiple tasks are run in parallel.

The Correct T-SQL to Work in Sets

The general advice is to not create procedural programming, instead work in sets. Let the machine determine the “how”, which is what it has been programmed for. It may not be obvious how to rewrite a query without using cursors and loops, but this is doable. When you do procedural programming (loops, recursive calls, etc.), you’re forcing it to work in a specific way that is almost never optimal, causing threads to follow different paths due to the execution of different pieces of code at the same moment, losing hardware efficiency and this finally forces the query to execute serially because of thread divergence. Check this link for additional information.

Example: There’s a table with historical information about disk space in each of the servers. It contains Server, Drive, Capacity, FreeSpace and DateCollected. There are 160 servers and 1380 drives among all servers, but the table has 21 million records. To get the latest information from this table, you could select the record that doesn’t have a previous record, but this means reading an average of 15 million records for every one of the 21 million rows. Instead, the following query first benefits from sub-setting the information getting the newest date, and then matching those rows to get the remaining information.

The execution plan is as follows. Note that initially it reads 21 million records, but the information is returned in only 60 seconds even when there are no indexes defined on it, this due to the parallelism which can be seen in the execution plan below.

Example: Get information from all GAM extents DIFF map pages for the MSDB database. This is part of a bigger solution described in this link. Although you can declare a cursor to iterate through each GAM page and get the DBCC information from it, this query creates the DBCC commands to execute, letting the engine decide how to distribute work, and then runs the commands as a whole.

Pablo Echeverria worked for more than 10 years as a software programmer and analyst. In 2016, I switched jobs to a DBA position, where I have implemented new processes, created better monitoring tools and grown my data scientist skills.