Due to the emerging trends with both public and private cloud and software-defined data centers, several attempts were made to emulate shared storage to implement a more cost-effective solution. This is where third party solution providers come in. Their technology solution leverages locally attached storage in commodity server and configure them as shared storage that can be presented to the Windows Server Failover Cluster (WSFC). This eliminated the need for expensive, complex and single-point-of-failure risks associated with a SAN.

Microsoft’s “Cloud-first” Strategy and the Evolution of Enterprise Storage

When Satya Nadella took over as Microsoft’s CEO in 2014, he refocused the organizations strategy to move towards the cloud. Development efforts were focused on virtualization and cloud platforms, particularly, Hyper-V and Microsoft Azure. Microsoft’s experiences and learnings from deploying platforms on Azure became the basis for introducing new features in the on-premises versions of their products – Windows Server, SQL Server, Hyper-V, System Center and more. Deploying systems at a very large scale meant finding new ways to reduce total cost of ownership. One of them is eliminating the need for expensive storage solution like the SAN.

Converged infrastructures come as pre-packaged stack of hardware that combines storage, compute and networking that is validated and tested by the vendor. Hyperconverged infrastructures take the concept a step further by providing storage and compute virtualization of the hardware resources. Microsoft leveraged these two platforms in their recent releases of the Windows Server operating system, calling it the “cloud-ready operating system”.

Windows Server 2016 introduced a new feature called Storage Spaces Direct (S2D). S2D uses commodity servers with locally attached drives to create highly available, highly scalable software-defined storage. Not only does this feature replaces expensive SAN but also presents local storage as if it was shared storage on a WSFC without the need for third-party applications. However, it is only included in the Datacenter Edition.

The requirements for running S2D are the same as that of a WSFC. S2D leverages Server Message Block (SMB) 3 and the Cluster Shared Volume (CSV) file system to emulate shared storage across all of the nodes in the WSFC. And because it uses ethernet to access all of the storage on the other nodes in the WSFC, it is recommended to use a remote-direct memory access (RDMA) capable network adapter on a 10 GbE or higher network switch. You certainly don’t want the WSFC nodes to only have a single network adapter. You should have a minimum of three (3) network adapters – one for production traffic, one for the S2D traffic and one for heartbeat/internal communication traffic.

In the previous tip on Step-by-step Installation of SQL Server 2016 on a Windows Server 2016 Failover Cluster - Part 1, the section on Preparing the shared disks highlights configuring the shared storage subsystem prior to building the WSFC. Not in this case, though. The servers that will be used as WSFC nodes only have locally attached storage which will be configured as part of S2D.

You can use a combination of rotating disks for capacity and solid state drives (SSDs) and non-volatile memory express (NVMe) for performance. Additional information on choosing drives for S2D deployments can be found in this Microsoft documentation.

The configuration used in this tip consists of two (2) Windows Server 2016 Datacenter Edition servers, both are joined to an Active Directory domain. The servers each have three, locally attached 1 TB rotating disks. 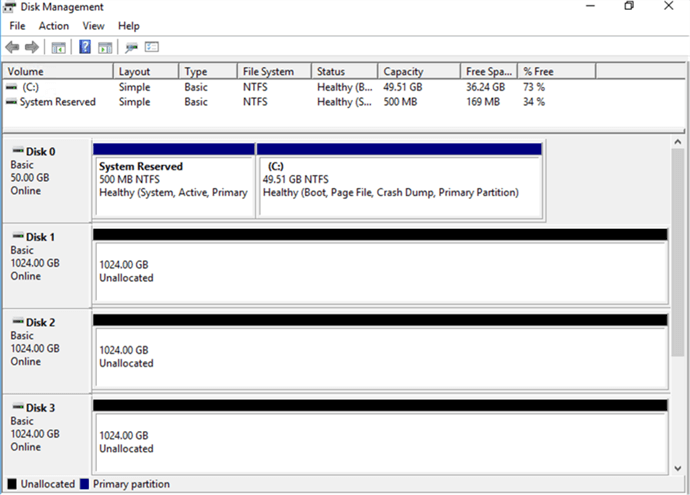 Before you can create a WSFC, you must install the Failover Clustering feature on all servers that you want to include in the WSFC. The Failover Clustering feature is not enabled, by default. If you plan to deploy several servers to be members of a WSFC, you can create a generic server OS deployment image that includes this feature.

To add the Failover Clustering feature: 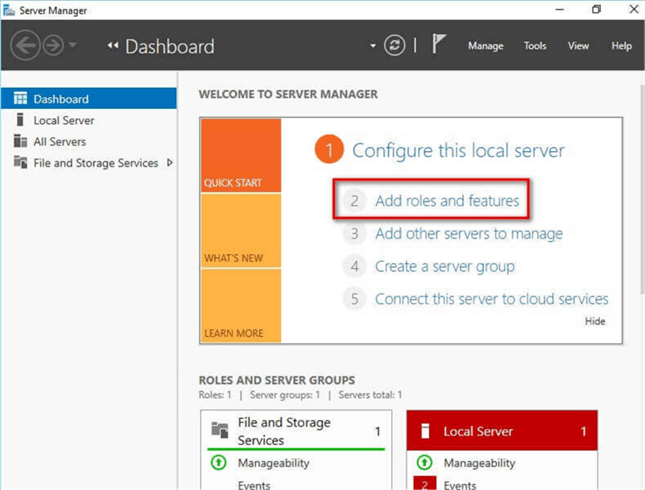 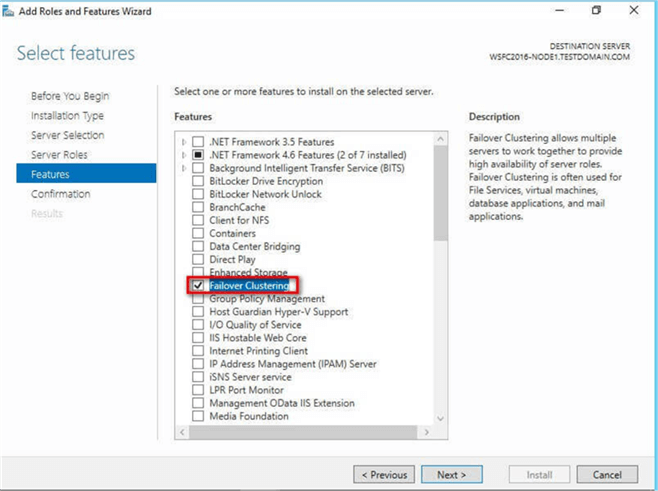 When prompted with the Add features that are required for Failover Clustering dialog box, click Add Features. Click Next. 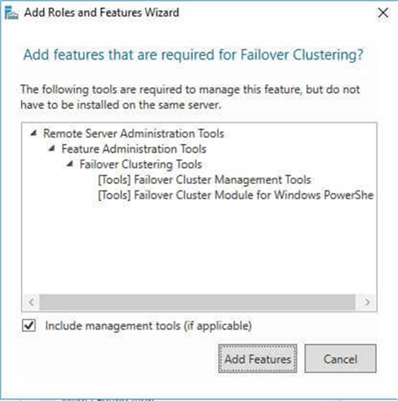 NOTE: In previous versions of SQL Server, you were required to install the .NET Framework 3.5 with SP 1. This is no longer the case with SQL Server 2016. 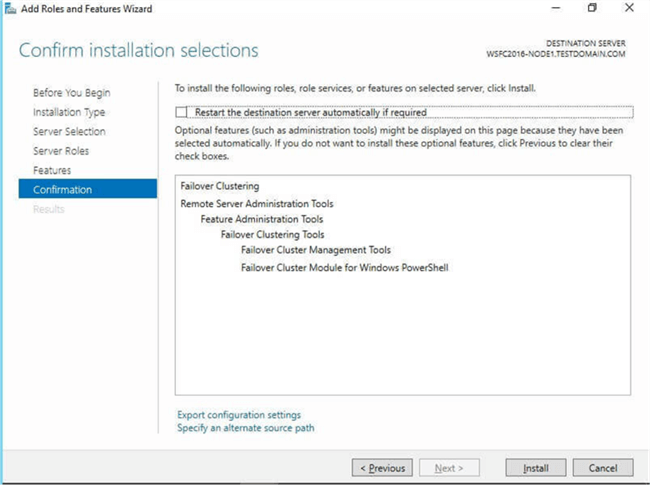 NOTE: Perform these steps on all of the servers that you intend to join as nodes in your WSFC. 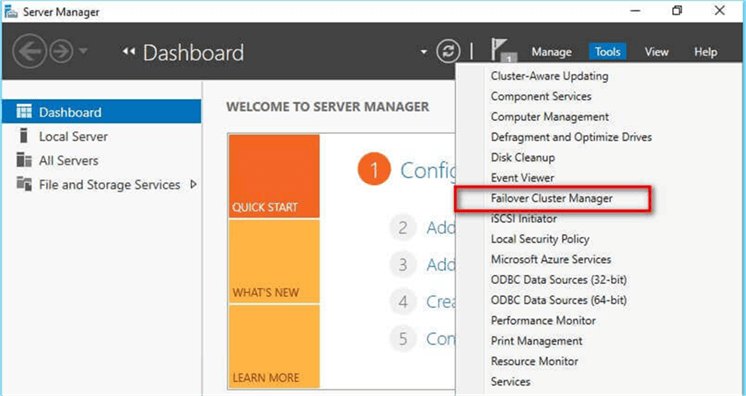 NOTE: These steps can be performed on any of the servers that you intend to join as nodes in your WSFC. 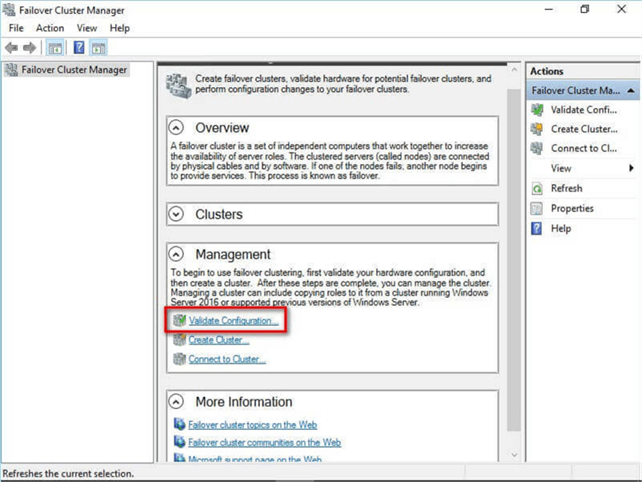 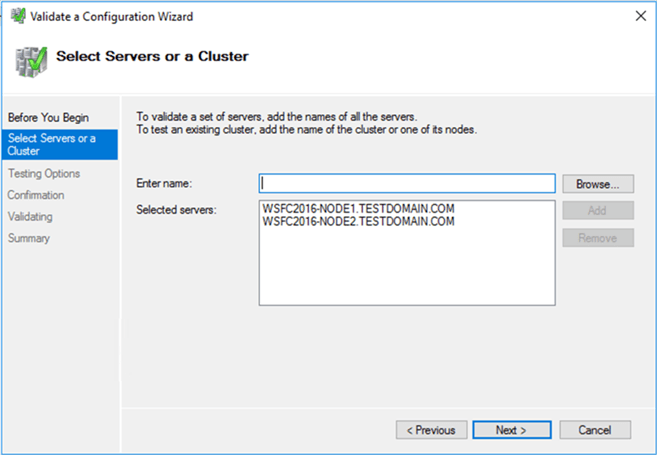 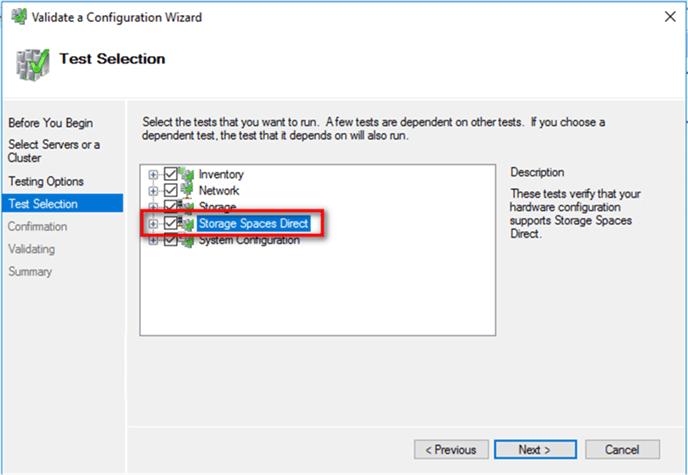 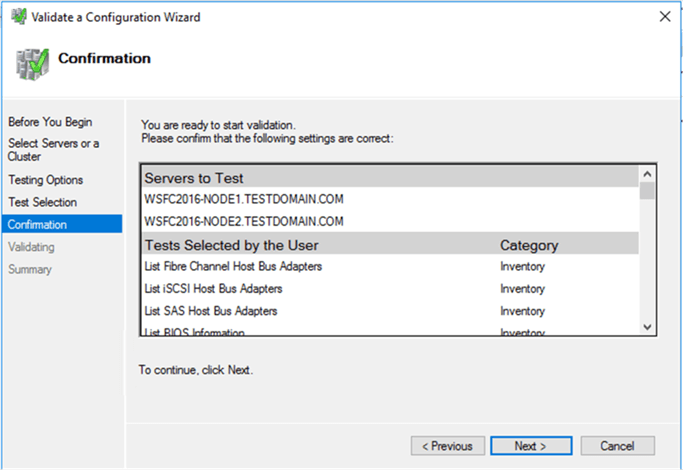 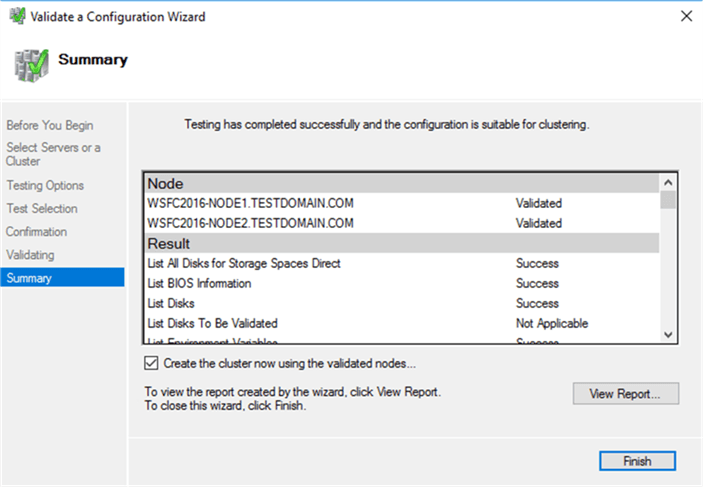 Another way of running the Failover Cluster Validation is by using the Test-Cluster PowerShell cmdlet as described in this previous tip. 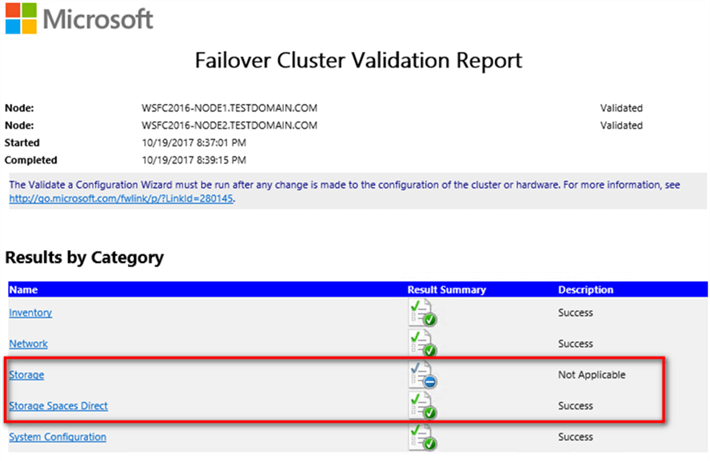 Scrolling down to the section on Storage will show you all the checks that have been skipped. 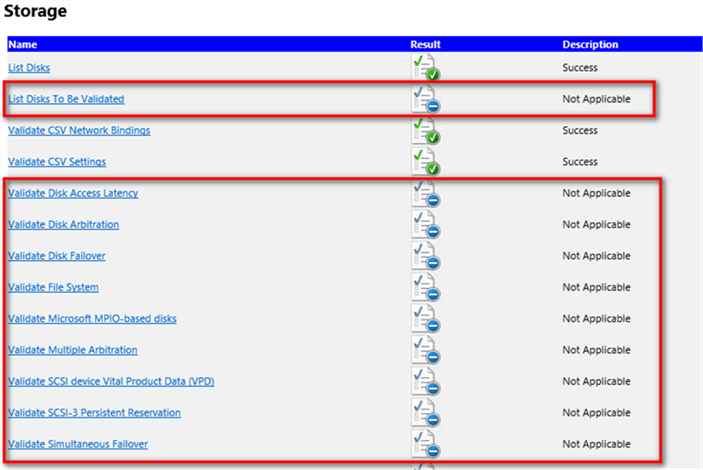 Scrolling down to the section on Storage Spaces Direct will show you all the checks that have been performed. 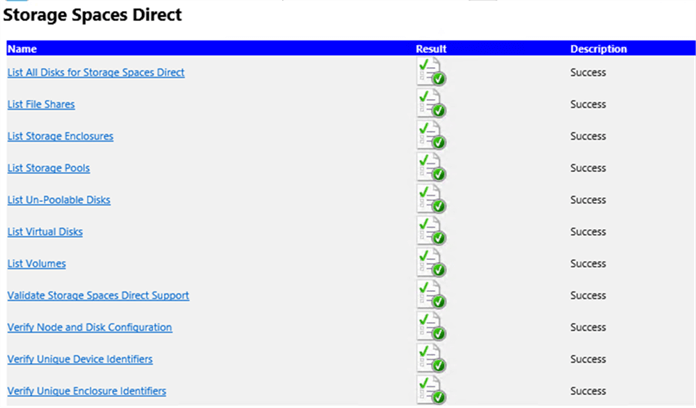 NOTE: These steps can be performed on any of the servers that you intend to join as nodes in your WSFC.

To create the WSFC: 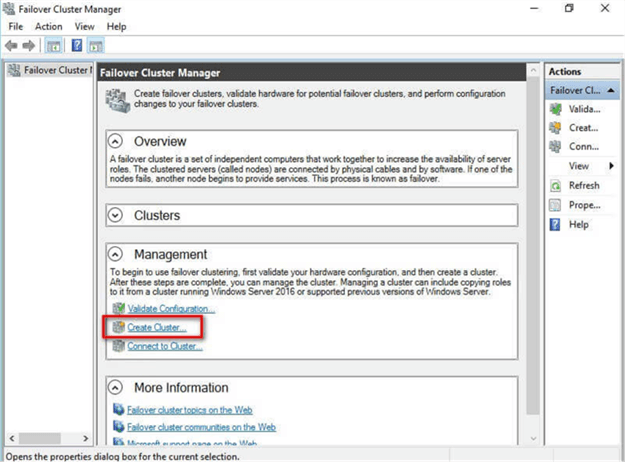 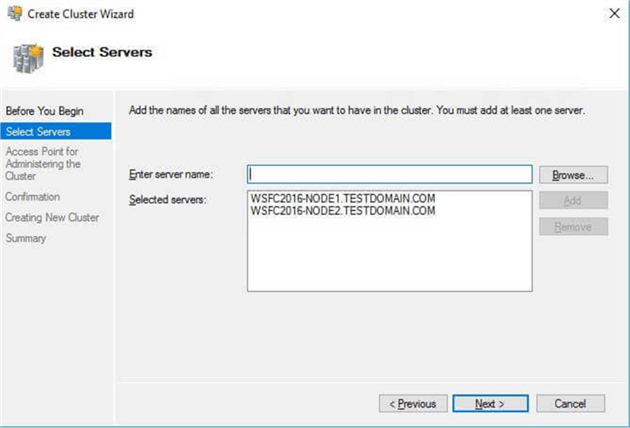 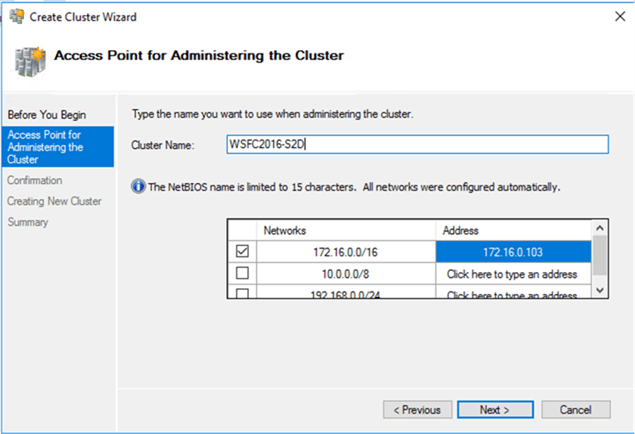 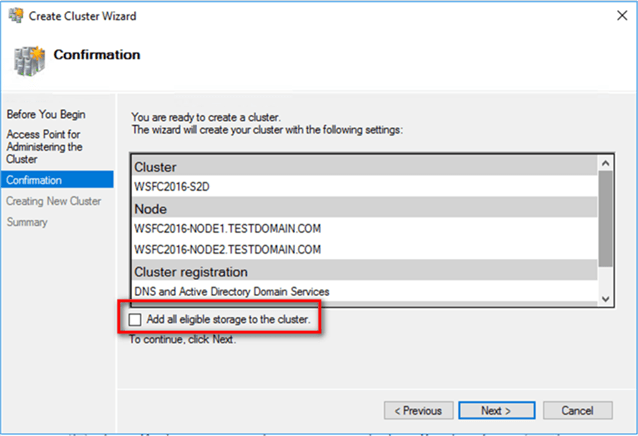 A word of caution before proceeding: Before clicking Next, be sure to coordinate with your Active Directory domain administrators on the appropriate permissions that you need to create the computer name object in Active Directory. It will save you a lot of time and headache troubleshooting why you cannot create a WSFC. Local Administrator permission on the servers that you will use as nodes in your WSFC is not enough. Your Active Directory domain account needs the following permissions in the Computers Organizational Unit. By default, this is where the computer name object that represents the virtual hostname for your WSFC will be created. 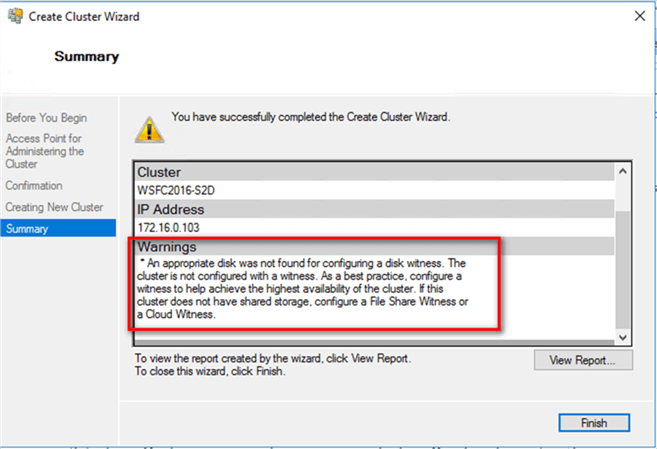 Note on the Warning message: Because the servers only have locally attached storage, the cluster creation process could not assign an appropriate disk to configure as a disk witness. The witness type can be configured at a later time.

Another way of creating the WSFC is by using the New-Cluster PowerShell cmdlet as described in this previous tip.

Since the Create Cluster Wizard could not assign an appropriate disk to configure as a disk witness, you will configure the cluster quorum settings to use Node and File Share Majority. Before you change the configuration, you need to create a file share and grant the WSFC virtual server name Read/Write permissions to it. 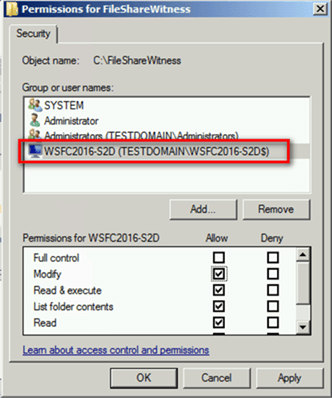 To configure the quorum in a failover cluster: 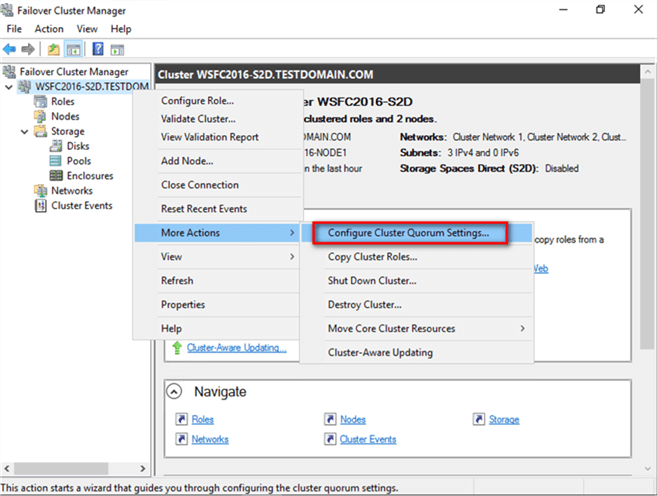 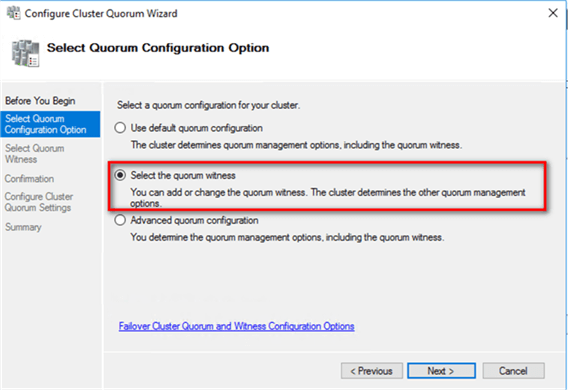 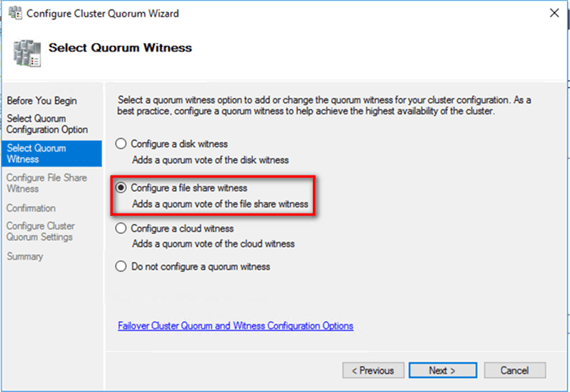 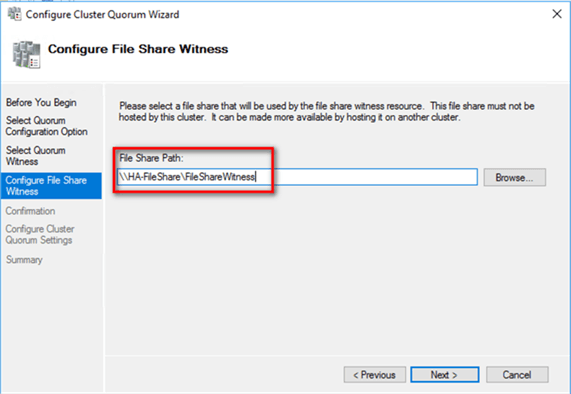 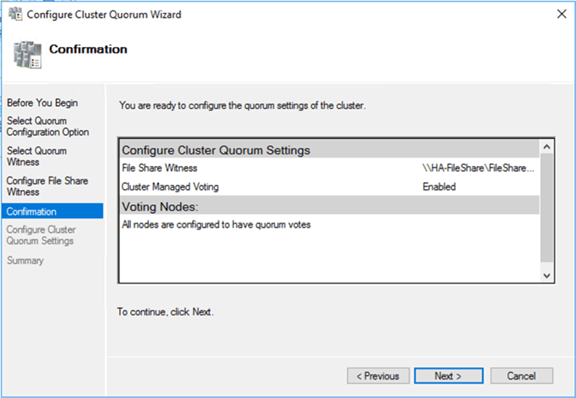 Another way of configuring the WSFC quorum configuration is by using the Set-ClusterQuorum PowerShell cmdlet.

You can verify that the cluster quorum setting is now configured to use the file share witness by looking at the Cluster Core Resources section. 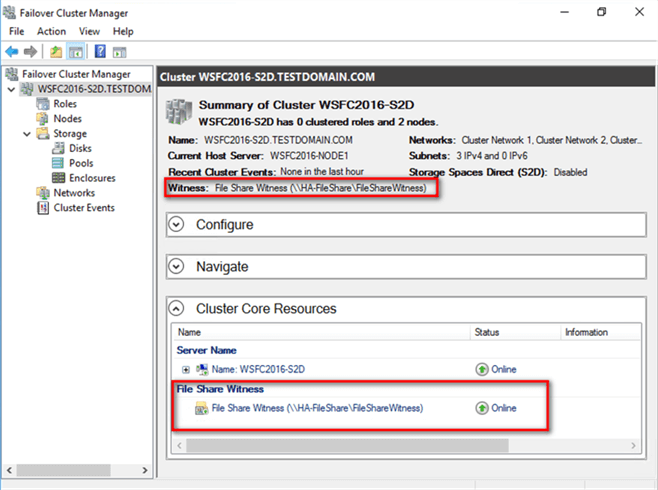 In this tip, you have created a Windows Server 2016 failover cluster without shared storage and configured the quorum settings. In the next tip, you will proceed to enable and configure Storage Spaces Direct as well as configure a dedicated network adapter for the S2D traffic.