Before discussing our main issue in the tip, let's have an overview of Computed Columns and the Scalar Function concepts.

A Computed Column is a special type of columns with its values calculated using an expression that includes constant values, functions, data from other columns in the same table, or a combination of these components connected by one or more operators.

The Computed Column is a virtual column, with its value calculated, and not inserted directly by the user. Each time the column is referenced in the query and stored in memory without being stored physically in the table, unless the column is defined as a PERSISTED column. The Computed Column makes the life of the developers easier by providing the calculation logic at the database layer, rather than calculating it at the application layer.

A SQL Server User Defined Function is encapsulated T-SQL commands that accept parameters, performs some sort of action or calculation, and returns the result of that action as a value, hiding the logic complexity from the application layer and making it reusable.

SQL Server provides us with two types of user defined functions; Table-valued function, also known as TVF, that returns the result in the form of a table and can be used in the FROM clause of the query, and a Scalar-valued function that returns a single data value of the type defined in a RETURNS clause.

In addition to the result shape, the two user defined function types differ from each other in the way they are handled internally by the query optimizer. The Scalar-valued function will be executed once for each row in the result set, where SQL Server will call the Table-valued function once regardless of the number of rows to be processed.

A common design mistake is to encapsulate the calculation logic of the Computed Column using a user-defined Scalar function, as it will prevent the queries that are submitted on that table from taking benefits of the parallelism feature regardless of the Maximum Degree of Parallelism value being set to 0 or a value larger than 1 and the query cost exceeding the Cost Threshold for Parallelism configured value.

Assume that we have configured the SQL Server instance with the Max Degree of Parallelism value equal to 0, that allows the SQL Server Engine to use all available processors to process queries and the Cost Threshold for Parallelism value to 0, to allow executing all queries using a parallel execution plan, as shown in the snapshot below, taken from the Advanced tab of the Server Properties window: 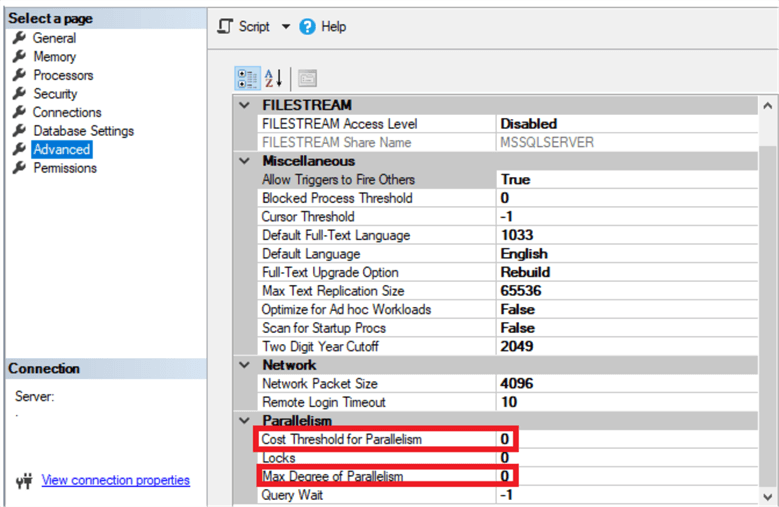 To start with our demo, we will create a User Defined Scalar function, that takes the monthly income of the employee and calculates the yearly income for that employee including the basic salary and the bonus, using the CREATE FUNCTION T-SQL statement below:

The statement will fail, showing that we cannot define the Computed column as PERSISTED because this column is non-deterministic as shown in the error message below:

The previous function that is used to calculate the Computed column values is deterministic, as it will always return the same value when called with the same input, but SQL Server does not know that. Let's remove the PERSISTED word from the computed column definition in the previous CREATE TABLE T-SQL statement, as shown below:

Let's now try to create a non-clustered index on the Computed column, using the CREATE INDEX T-SQL statement below:

The statement will fail, showing that the Computed column is non-deterministic and cannot be used in the index key, as shown in the error message below:

The below INSERT INTO T-SQL statements can be used to fill the two tables, Employees_NoFunction and Employees_WithFunction, with the same 400K records, taking into consideration that the number beside the GO statement specifies the number of times the statement will be executed, as shown below:

The two tables are ready now for our testing. We will execute the below two SELECT statements, after enabling the TIME and IO statistics and enabling the actual execution plan:

Finding a string value in a SQL Server table

Ahmad Yaseen is a SQL Server DBA with a bachelor’s degree in computer engineering as well as .NET development experience.