Using T-SQL to find the shortest distance between two points

This tip shows how to determine the shortest path of a weighted graph problem with the help of some elements from the T-SQL language.  The weighted graph problem is a classic and interesting problem that is usually presented in computer science academic courses. In graph theory, the shortest path problem is the problem of finding a path of two vertices (or nodes) start and end, in a graph such that the sum of the weights of its constituent edges is minimized (from Wikipedia).

There are several well documented algorithms for this problem. Algorithms like: Bellman-Ford, Dijkstra, Topological Sorting, The Floyd-Warshall algorithm, the Johnson's algorithm and more.  See this link for more info: https://brilliant.org/wiki/shortest-path-algorithms/.

The values of each node in the graph are called its "weight" and can be considered as the “cost” or the "distance" of the node. This value is attached to all the edges of the graph. The solution to this problem is finding the shortest or minimal path in the graph, that is, to show a way to go from a starting node to the ending node with the minimal cost or distance.

There are many scenarios where this algorithm comes handy. Here are some common scenarios:

In this tip, I will show a T-SQL alternative to these algorithms that deals with this problem with the aid of a common table expression recursive query and the rank window function.

For the solution, I will create a simple table and populate it with the "graph" vertices.

Here is the table structure and some sample content, representing a graph of connected cities A, B, C, D, and E. Each city is connected to each other with a network of roads as shown below.

The drawing of the graph is something like this: 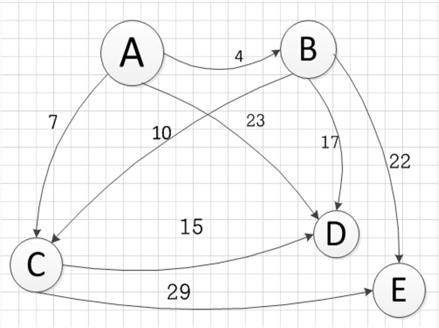 Here is a summary of the process.

Here is the T-SQL code for the stored procedure

Here is an example using the procedure

For the above table and content – to find the shortest path from point A to point D, execute the procedure like this:

Here is the output:

Eli Leiba is a senior application DBA, a teacher and a senior database consultant with 19 years of RDBMS experience.