In Part 1, you learned how to install Docker on Windows Server 2016. In Part 2, you installed Docker on a Linux CentOS server. Part 3 walked you thru exploring the different docker commands that will help you get started on working with containers. This tip will introduce you to the container naming conventions and internals of container images, configuring persistent storage for your SQL Server containers and running multiple SQL Server containers on a single host machine. 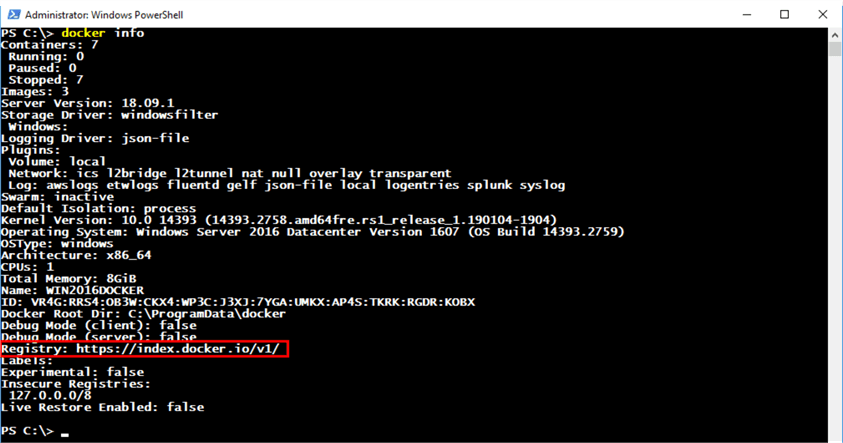 However, there are other public repositories available such as the ones from Microsoft, Amazon AWS, Google Cloud Platform and the likes. You need to know the corresponding hostnames of the public repository that you would like to use to pull image from.

After the registry hostname comes the repository (or repo, for short) name. The repo structure varies depending on how the images are stored on the container registry. In the case of Docker hub, since there are so many software vendors that use it as a public container registry, the first-level repo name is the name of the software company. For example, docker.io/microsoft is Microsoft's official repo on Docker hub whereas docker.io/ibmcom is IBM's.

After the repo name comes the image name. The image name is what identifies the contents of the container image.

Finally, there's the tag. The tag further identifies the content of the container images. Some might consider images and tags as one and the same. However, it helps to understand what they are used for, so you can leverage them when you build your own container images. SQL Server has multiple supported versions running on either Linux or Windows containers – SQL Server 2016, SQL Server 2017, SQL Server 2017 with additional updates installed, SQL Server 2019, etc. Similar to when you want to use a specific SQL Server version, you have to be explicit as to which one you need. This is where the tag comes in. By default, if the tag is not specified when pulling a container image, it will use the latest tag.

Refer to the docker pull command used in the previous tip to understand the container naming convention.

Using the container naming convention, this could have been written as,

You could also use the MCR's registry hostname as follows:

However, you need to be explicit about using tags to pull the version that you need. Should you need a specific version, append the appropriate tag to the image name. The command below will pull the SQL Server 2017 on Ubuntu Linux with CU7 from the MCR. 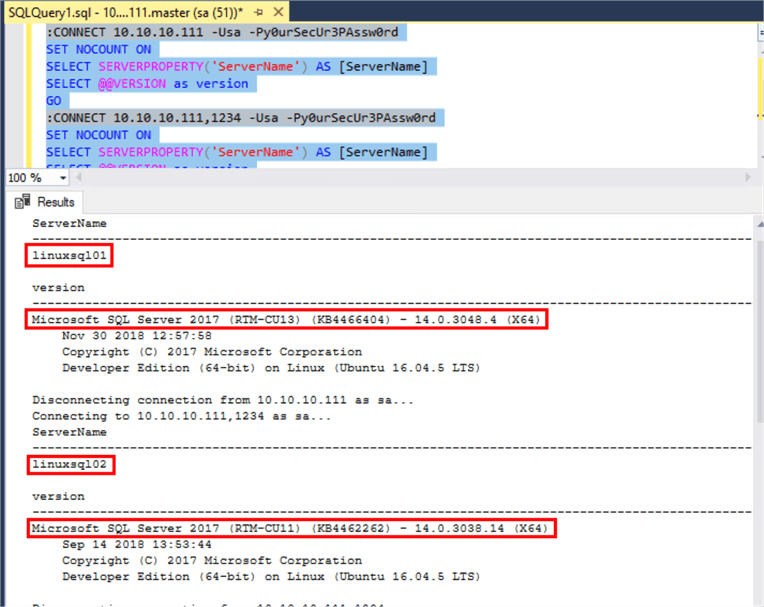 Understanding proper container naming convention is important especially when you start creating your own container images and store them on either public or private container repositories.

A container image is a read-only template for creating application containers. It consists of a set of files structured in a file system layer that contains application files, operating system-dependent files like libraries that your application needs and metadata that describes what it is. Container images can be shared with other images and containers. If you look at the output of the docker pull command used in the previous tip to pull an image of the SQL Server on Linux container, you would see multiple lines, each one with the Pull complete message.

Each of the lines with a Pull complete message represents a file system layer of the image stacked on top of each other to create the full image. The image consists of multiple layers, leveraging the union file system (UnionFS) to combine these layers and make it look like a single image. You can explore the layers that make up the image (and other low-level information about the container) by using the docker inspect command. This will display a JSON array that describes the metadata of the image. Scroll down to the "Layers" section to see how many layers an image has. Each line represents an image layer.

The number of Pull complete messages is the same as the number of layers in the image. You can use the docker history command to show the different layers inside the image and their corresponding sizes. It will also show you the different commands and actions that took place to generate each layer that created the image.

All non-zero-sized commands together with the FROM, COPY, RUN and CMD commands generate a layer. Details of these commands will be covered in a future tip.

If you count the number of non-zero-sized commands plus the first CMD command that runs the SQL Server process (the second CMD command simply runs the bash shell), you have a total of nine (9) layers which is consistent with the number of Pull complete messages. You will get to see the layers that are created when you build your own container image.

A container is a runtime instance of an image, an execution environment for an application. Using baking cake as an analogy, you can think of an image as the recipe while a container is the cake. You can bake as many cakes (containers) as you want by following a given recipe (image).

Given the read-only nature of an image, it is a little bit confusing since containers run applications that modify data. How is this possible?

When you create a new container, a thin writable layer is added on top of the underlying stack of layers present in the read-only container image. Since the image is read-only, all changes made to the running container - such as creating new files, modifying existing files or deleting files - are written to this thin writable container layer. This is done using the copy-on-write process. When a file inside the image needs to be modified, it locates the file in the image, copy it on the writeable layer and modifies it there.

Containers are designed to be short-lived and the images immutable. This means that the images and running containers never change. If you want to update the application inside the container – for example, installing the latest SQL Server service pack – the best practice is to create a new image that has an updated version of the application, create a new container based on the new image and delete the old one. However, deleting the old container also deletes the writeable layer that contains all the changes made to the container. As SQL Server DBAs, data protection is a top priority. When you create a new database inside a SQL Server instance running on a container, the database files (MDF/NDF/LDF) get created on the thin writeable layer. Deleting the container also deletes the thin writeable layer together with the SQL Server database files – including the data. How do you deal with this?

The preferred way to persist data that Docker containers generate and use is thru volumes. Volumes are Docker objects and are created and managed by Docker. They are directories (or files) that are outside of the container's union file system and exist as normal directories and files on the Docker host's filesystem – they live outside the container. You can think of them as volume mountpoints in Windows – it looks like a folder inside the operating system (container) but is external to it. With SQL Server containers, you can create a Docker volume, mount it on the container and use it to store the database files. If the container is deleted, the database files are kept in the volume.

By default, when you create a volume, Docker creates a folder on the host and is located in /var/lib/docker/volumes in Linux and C:\ProgramData\docker\volumes on Windows.

You can create a volume by using the docker volume create command. Be sure to specify a meaningful name or Docker will generate a random name for you.

You can inspect the volume metadata by using the docker volume inspect command. Notice the Mountpoint key pointing to the location of the folder in the Docker host. 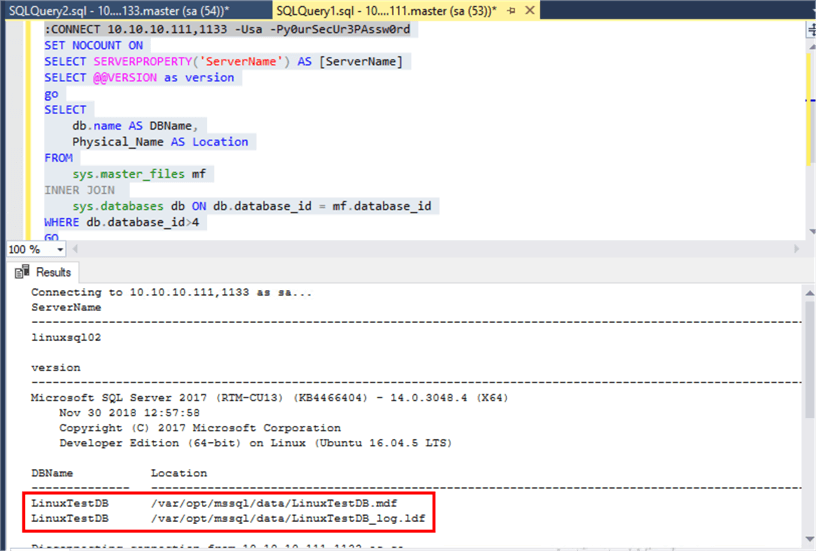 Since this folder was mounted as a Docker volume, you can explore it from the Docker host as well using the ls command. The data folder is the standard DATA folder in SQL Server.

This makes it easy to update or upgrade SQL Server since the system and user databases are outside of the container. Simply delete the old container and create a new one with an updated version of SQL Server. Of course, this is not a substitute for proper backup processes when performing an upgrade. 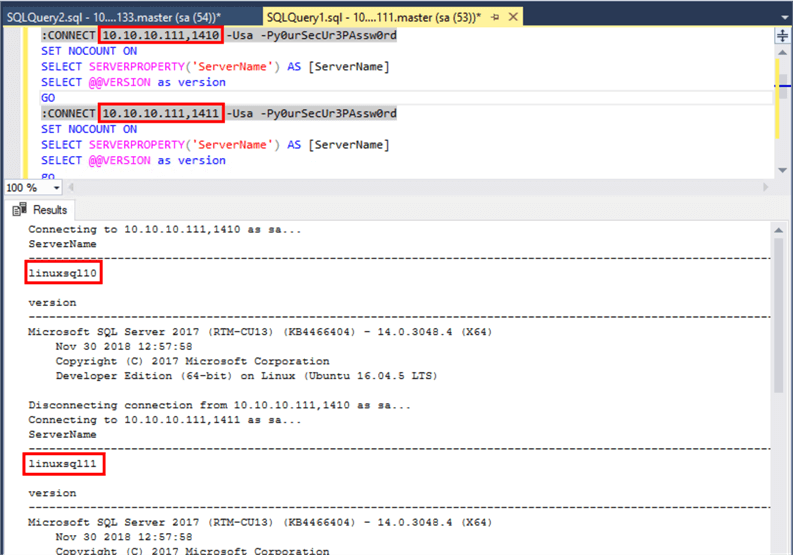 In the next tip in this series, you will continue exploring container images by understanding the Dockerfile and how you can create your own SQL Server containers.