Most of the examples highlighted in previous tips used existing container images available on public repositories like Docker Hub. If you have specific configuration requirements for standardizing deployments such as having user databases or tools installed for development environments, the available public container images may not be enough. You have to build custom container images according to your standards.

There are two ways to create your own custom images – by using a Dockerfile or by creating from an existing container.

A Dockerfile is a text document that contains all the commands a user could run on the command line to create a custom image. Using the same baking cake as an analogy, if the image is the recipe, the container as the cake, Dockerfile is the list of ingredients. You can think of it as a script, composed of various commands/instructions and arguments listed sequentially to automatically perform actions on a base container image to create a new one. Dockerfile defines what goes on in the environment inside your container – from the application that runs inside the container to the networking ports that the application will listen to. In this case, SQL Server is the application. Once the image is built, you can run as many containers as you want, like how you would build a golden virtual machine image for standardizing deployments. It is also a good documentation tool for those who want to understand how the image was built.

But before you can create your own custom container images, you need to understand the contents of the Dockerfile and how you can use them. Use the instructions on the tip Install and Configure SQL Server 2017 Availability Groups on Linux - Part 1 to create your custom SQL Server 2017 on CentOS Linux container.

The file needs to be specifically named Dockerfile – with no file extension and with an uppercase D. You can create the file on Windows using your favorite text editor but make sure you remove the .txt extension when you save it. Once completed, you can copy it to a folder on the machine where you have the Docker client installed.

NOTE: Do not use the root directory to store the Dockerfile. Create a folder to store it into together with your application-specific files.

If the base image defined in the FROM instruction does not exist locally on the Docker host, it will be downloaded from the Docker Hub before the custom image gets created.

The LABEL instruction - a key-value pair - adds metadata to an image. This is for documentation purposes and helps define the custom image to whoever will inspect and use it. Labels can be used to define what the image is about, who the vendor is, the version of the application, release date, a short description and the likes. You can write a LABEL instruction in multiple lines like the example below.

The RUN instruction will contain commands depending on what you want to run as part of building your container image. For example, when creating a custom SQL Server 2017 on CentOS Linux container, you need to:

The equivalent RUN instructions for these two are as follows:

Any command or instruction executed in the Dockerfile after this line will use the /opt/mssql/bin (the SQL Server processes’ default folder) directory. Should you decide to run another process from a different directory, you either define another ENV instruction or simply provide the complete path.

Additional RUN instructions are needed to run SQL Server on a Linux container. For example, the /var/opt/mssql/data directory does not exist at this point since the mssql-conf utility was not used as part of the installation. Therefore, a RUN instruction that creates the directory is provided as follows:

Plus, similar to granting the proper folder permissions to the SQL Server service account on Windows, the SQL Server process account needs to have permissions to access the /var/opt/mssql directory and the /etc/passwd file. The /etc/passwd file is used to keep track of every registered user that has access to a system and contains information such as the user account, password hash, home directory, group ID and the likes. The corresponding RUN instruction for this is provided as follows:

The parameter g=u means to grant group permissions to be same as the user’s (the SQL Server process account mssql).

The EXPOSE instruction informs Docker that the container listens on the specified network ports at runtime. This does not actually publish the port but rather to inform users about the ports that the application is listening on when running on a container. The default port number for SQL Server is 1433.

The CMD instruction allows you to set a default command and default parameters which will be executed only when the container is run. When you don’t provide a command when running a container, this instruction is executed. However, this can be ignored should you choose to run a container with a specific command.

The CMD instruction has three formats:

You can have multiple CMD instructions in a Dockerfile but only the last one will be executed. Hence, it makes sense to properly plan the custom image that you are building. Decide on the command that you want to run by default when a user runs the container.

The way SQL Server runs inside a container is by running the SQLSERVR process from the opt/mssql/bin directory, which is unlike running SQL Server on a full-blown Linux operating system where you start the SQL Server daemon/service. Run the SQL Server process when the custom container is run using the instruction below.

A common confusion when creating Dockerfiles is the availability of different instructions that may seem redundant. Take the CMD and RUN instructions, for example. The form and functionality may look the same. But how are they different?

The CMD instruction, however, sets a default command and/or parameters, that only runs when you run the container.

Once you’ve created the Dockerfile, save it inside a folder where you have the Docker client installed. In this example, a folder named dockerBuild is created.

Use the docker build command to build your custom SQL Server on CentOS Linux container image from the Dockerfile.

The -t parameter describes the name and, optionally, a tag for this image. The 1.0 tag indicates that this is version 1. You can use any value for this. Just make sure it is intuitive enough for yourself and other users. The dot (.) after the name describes the path where the Docker client will reference when building the image, in this case, the current working directory. If you have included other files like database backups as part of the custom image, they must be in the same folder as the Dockerfile for them to be included in the build.

As this command runs, the Docker client will send everything in the current working directory to the Docker daemon and include them as part of the build process. It will read the Dockerfile and follow the instructions sequentially to create your custom image. 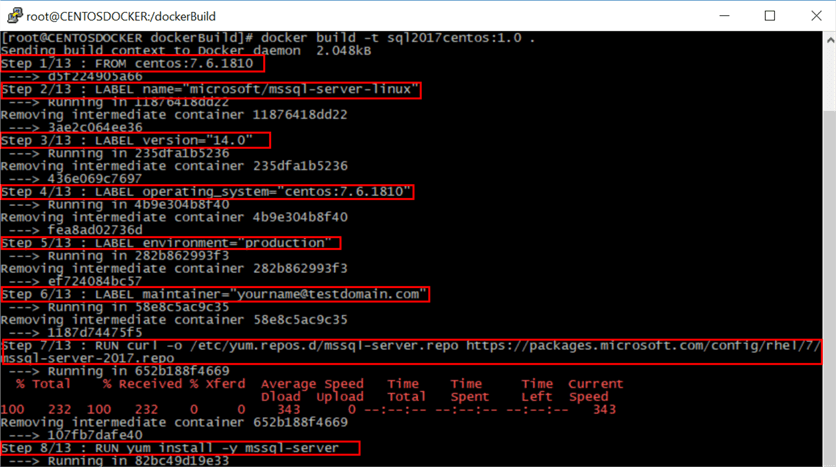 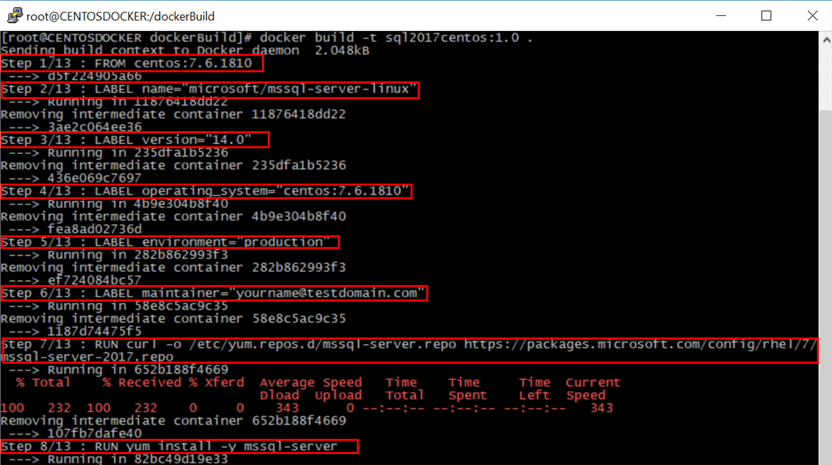 Use the docker images command to review the custom image created.

Use the docker inspect command to explore the image layers created with the custom image. Scroll down to the "Layers" section to see how many layers an image has. Each line represents an image layer. 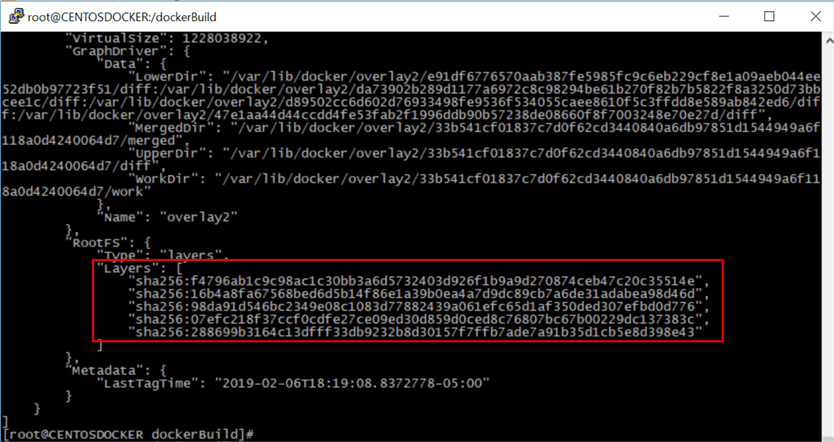 Use the docker history command to show the different layers inside the image and their corresponding sizes. It will also show you the different commands – the instructions in the Dockerfile - and actions that took place to generate each layer that created the image.

Test the custom image by running the docker run command below.

In the next tip in this series, you will continue with building your own custom SQL Server containers using the Dockerfile. But instead of running it on a Linux operating system, you will use a Windows Server operating system instead.