In any organization, data is stored in various locations and in several formats. Importing and exporting files and data is a very routine task in SQL Server. Developers use different mechanisms and tools as well as customized code to import and export different formats of data programmatically into and out of SQL Server either temporarily or permanently. Typically ETL tools are employed for this purpose.

But during the development phase, developers may not have ETL packages in place for importing and exporting data. Therefore, at times, they resort to manual methods or develop custom code for this. Maintaining different types of codebase to import/export data from various file formats requires more resources for developing, maintaining and operating the codebase. A better solution would be to have a common data gateway in the form of a library that can facilitate import/export of data into SQL Server, which would hide the underlying implementation complexity of importing/exporting data for each type of data source.

The rio package in R-services integrated with SQL Server 2017 provides an ability to address the problem. We will demonstrate how simple it is to work with various data formats with R services in T-SQL in this tip.

R comprises of a powerful tool of open source libraries and 'rio' is one amongst them. rio simplifies the process of importing and exporting data into and out of R in SQL Server. It allows almost all common data formats to be read or exported with the same function. Besides making import-export easy, it also uses R as a simple data parsing and conversion utility.

Before we begin, ensure system has the required software components like SQL Server 2017, SSMS, SQL Server R services (in-database), etc. Subsequently, to ensure rio is fully functional, we need to install this package. If you are new to R and installing R packages on SQL Server, consider following this link on how to install packages on R server.

Once the package is installed, open a new query window on SSMS and execute the code mentioned below. Let's go over the steps of the script.

The sp_execute_external_script is the store procedure that helps to execute external scripts (R in this case) inside the database engine.

Successful execution of the code validates that the package has been installed correctly and is accessible to SQL Server. 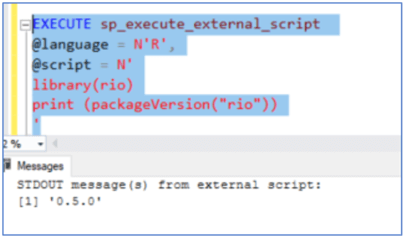 Since the required environment has been set, let’s go ahead and see how it works.

Import the Data into SQL Server

One of the popular file formats is the flat file format like CSV, TSV, delimited, etc. Let’s get started with the CSV file format. You can download a sample CSV file from here or feel free to use any CSV file that you have created or you already have in your system.

Below is the CSV file that we will be using in this tip. It is named CSVFile.csv and is saved in directory C:\temp\CSVFile.csv. 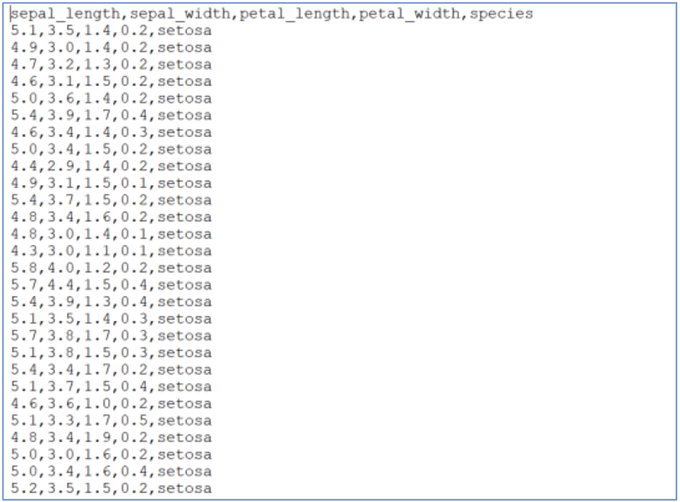 Once the CSV file is ready, execute the below code in SSMS.

In this code, apparently apart from referencing the rio package, we are using the 'import' function to read the CSV file followed by printing it in the output section using the print function.

Note: We need to use '\\'instead of  '\'while providing the location of the CSV file. This is because '\'alone is considered an escape character. 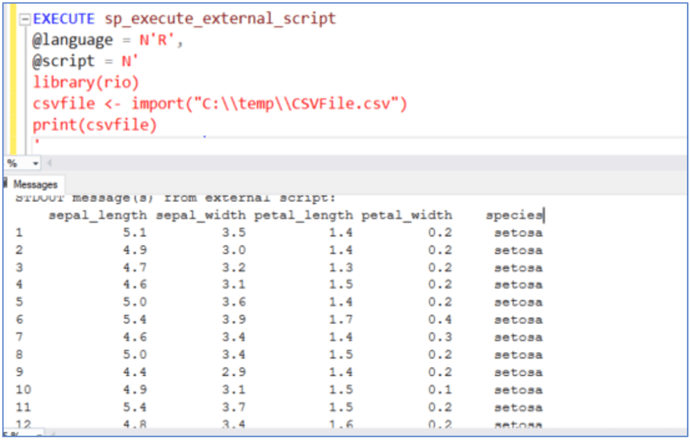 Now let’s try to output the same CSV data that we read in above into a better format than just printing it on the output console. In the below code, we are defining the output schema by using the 'WITH RESULT SETS' option and emitting output from the R-Script to T-SQL code by assigning the imported data to OutputDataSet data frame. 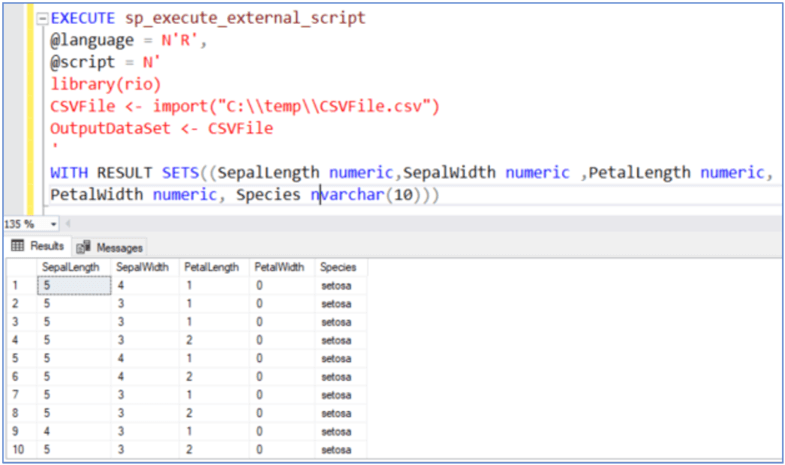 Let’s switch to one another popular file format - Excel. We can read an Excel file same way as a CSV file. Execute the below code in order to import the Excel file and data can be seen in the result window. The Excel file is named ExcelFile.xlsx and is saved in directory C:\temp\ExcelFile.csv in the system. You can use any sample Excel data or can download the file from here. 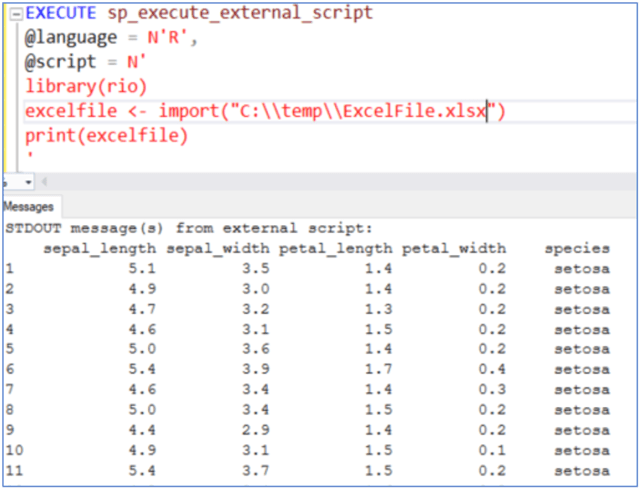 Now let’s try to work with one of the leading formats for storing and exchanging data typically over web, which is JSON. You can refer to any sample JSON file or can download one from here. Below is the JSON data file that we will be referring to in this tip. 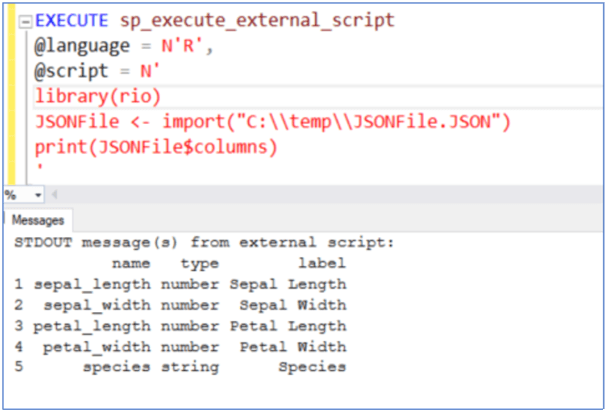 Import Data from a GZip File

You can take any sample CSV file and zip it in the format of <filename>.csv.gz or can download it from here. Execute below code to import zip file in R. 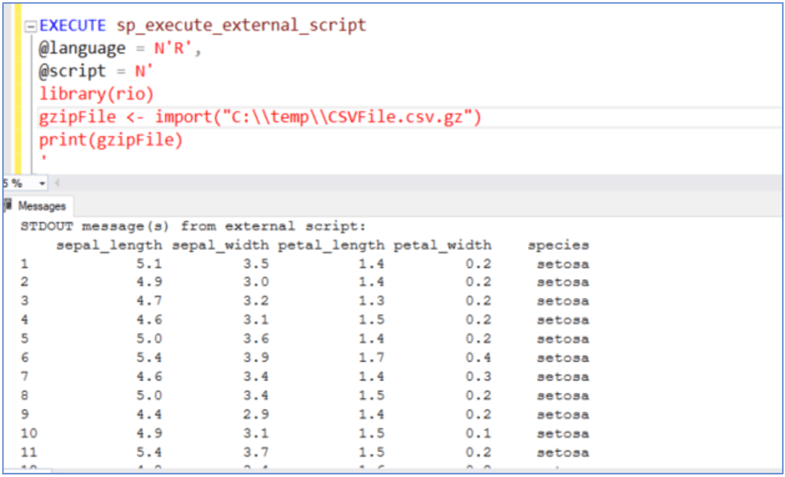 These were a few examples of how data with different file formats can be imported with the exactly the same code using the rio package in R. For more references on supported formats for the import function, please refer to the below chart. 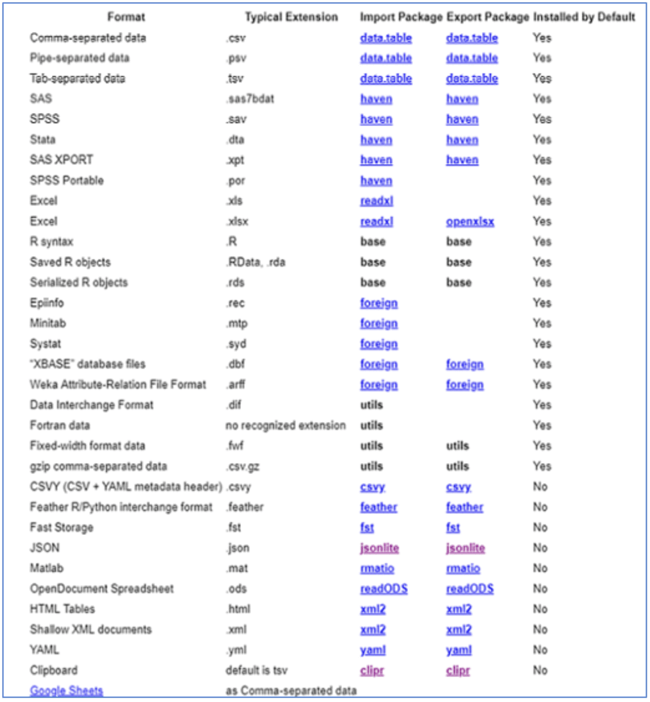 Now let’s move forward and see how the export functionality works with rio in R in T-SQL.

The rio package also allows you to easily convert data from one format to another.

Execute the below code in SSMS, the CSV flat file is the source file here. We have used the same CSV file as above and we are trying to export it to HTML format by using the export function.

Once the code is executed, data from CSV will be written into HTML format and 'HtmlOutputFile' file will be created at this location - C:\temp. The R exported data can be seen by clicking on the HTML file that gets created after executing the code. 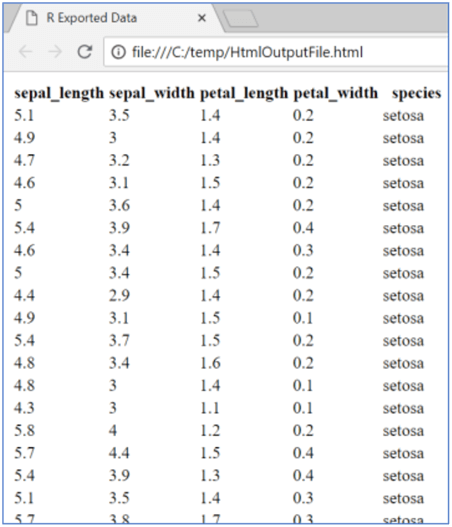 Using rio to Convert from TXT to HTML Format

The functionality explained in the above step can be achieved using the CONVERT function too. However, it comes with a limitation. Let’s say there is a need of performing data manipulation and calculations on the imported file before we actually want to write it to the required format. The convert function will not provide that option, as it imports from the source file and exports to the destination file format instantly, without leaving any room for data transformation.

Execute the code below that uses the 'convert' function to transform the source file format into the destination file format (csv to html in this case).

Using an INSERT INTO Command with rio

We have reached the last leg of this tip where we will see how to pull data into a SQL Server table from any one of the file formats in R using the rio package in T-SQL.

For this, let's first quickly create a table in SQL Server named CSVImports. We will be using the CSV flat file used above or feel free to use any other format for this exercise. Columns of this newly created table should match the columns of the CSV file. 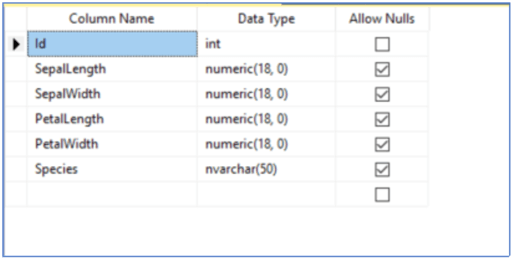 Execute the below code to load the data into the CSVImports table. Here the code is same as what was used above. Since we have made use of the 'INSERT' statement, the clause 'WITH RESULT SETS' is not relevant, so it is not used in the code. Also, if you look carefully, because of the pre-defined schema of the SQL table, the output is in good shape. 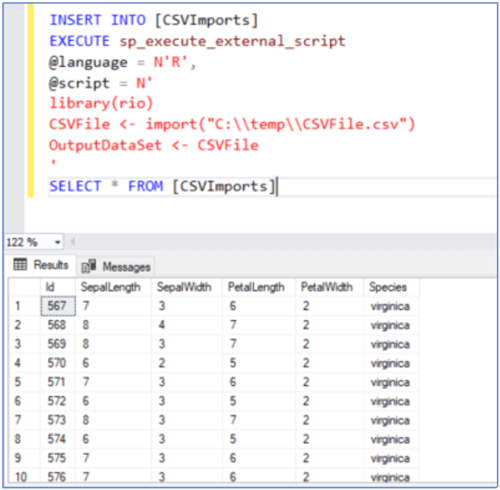 In this way, developers can use a common function from the rio package to read data from a variety of data formats, without the need to write custom and different code for different data sources / formats. Also, once the data is ready, it can be exported to the intended and supported formats with the exact same code, which reduces code duplication and complexity. This combined functionality enables developers to build a common data gateway for controlling data traffic in and out of SQL Server.