Transferring SQL Server data from a source database with numerous data tables with time and system resource limit is a very common issue. Let's assume that we have:

We can design an ETL package in two extreme ways, where all DF-tasks are either:

Possible Approach to Load Data in Parallel with SSIS

As practice shows, when the number of tables to transfer is large and so are the sizes of the tables, both the above-mentioned approaches do not give satisfactory results.

The better approach is to build a process in a semi-parallel way, meaning that a group of Data Flow Tasks (not all of them!) are executed concurrently. Such an approach shortens the time of execution and gives a more balanced usage of CPU and RAM.

One possible design of such an approach is shown below.

However, one can find at least three disadvantages in this structure:

A similar situation can occur in other sequence containers. Therefore, the main reason of the slowdown is its serial nature, nothing moves forward until the currently running container gets finished.

Better Approach to Load Data in Parallel with SSIS

Another solution can be found based on the model below, which is defined in queuing theory as 'a one-stage queuing model with multiple parallel servers'.

To avoid terminology confusion - 'server' within the Processing Module means a Processing Unit to serve (or process) a customer.

All servers in this model work asynchronously, i.e. when a server finishes the processing of a customer, it immediately takes another non-processed customer from the queue independently from other servers. There are K servers in Figure 2, therefore, the customers are dynamically distributed among K processing streams during run time. In other words, K is the rate of parallelism of the ETL process.

In terms of SSIS, this approach can be represented as follows:

This approach has three main advantages:

To comment further on the latter point: why maintaining configurability is so important?

In fact, the master and the set of SSIS packages form an easily extendable framework (see Fig.3), that can provide flexibility and scalability of the ETL process. 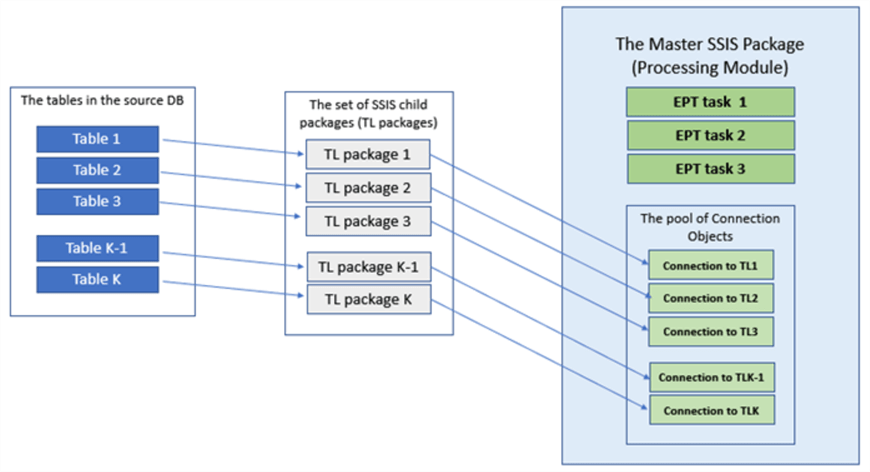 Overview of SSIS Package to Load Data in Parallel

The data used in this sample package is taken from database AdventureWorksLT2012 (https://github.com/Microsoft/sql-server-samples/releases/tag/adventureworks2012).

The destination tables reside in the database AdWorksDestination, they have the same names and same data schema as the source tables. The list of tables to process is in the dbo.ETLlog table (see Figure 4). 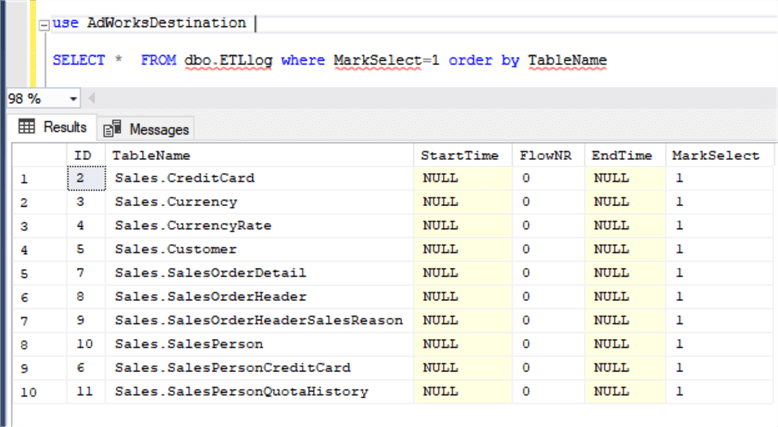 The structure of the main SSIS ETL package is shown in Figure 5. 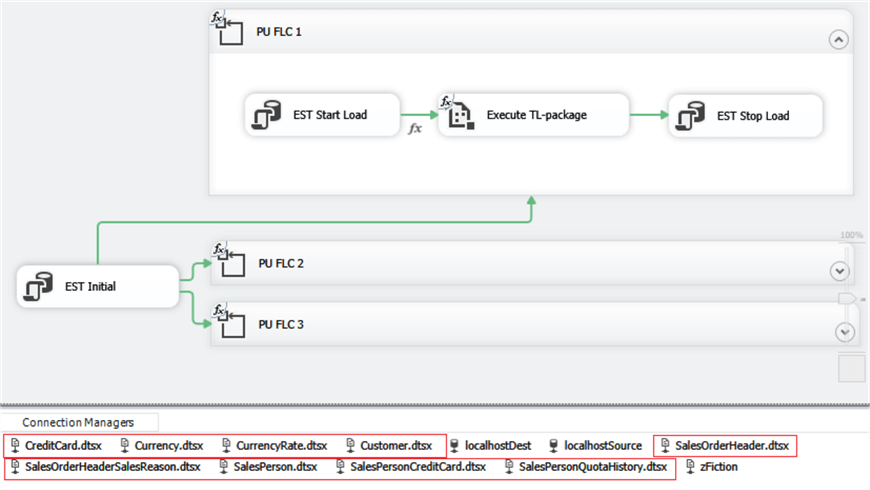 The package includes three For Loop Containers (PU FLC) with unique numbers 1, 2, 3. Each of these containers plays the role of a Processing Unit that should transfer source data to the destination in parallel.

The Connection Managers pool includes connections to each of the TL-packages (outlined in red above). 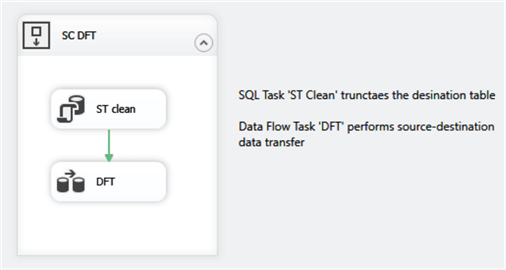 The algorithm of a Processing Unit consists of the following steps.

The TL-package name is defined for the selected table. Example: the table name Sales.CreditCard results to the TL-package name CreditCard.dtsx – the value of the user variable @[User::vPackageName]. This value is passed as an input parameter to the 'Execute TL package' task for further execution (see Figure 8). This is how a Processing Unit gets switched dynamically from one table to another.

When the TL-package is finished, the EndTime column gets a current timestamp (the SQL task 'EST Stop Load' in Fig.5) and the process repeats again from step 1.

The Main ETL package stops when all Processing Units are finished, i.e. when there is no record in the dbo.ETLLog with an empty value in the StartTime column. The result of the Main ETL execution is shown in Figure 9.

The ETL process can be pre-configured in different ways. 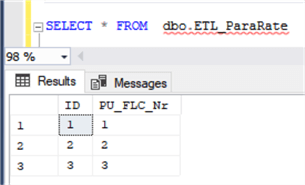 This data can be used within the 'EST StartLoad' module of each Processing Unit using the following T-SQL script.

Many Processing Units may be defined within the Main ETL in advance. The rate of parallelism of the Main ETL can be easily modified by including them in or excluding them from the dbo.ETL_ParaRate prior to the ETL run.

The ETL results for the case when PU_FLC_Nr = 3 is excluded from the configuration table is given in Fig. 11. 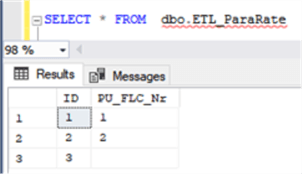 The described ETL framework is based on a log table (dbo.ETLlog), a configuration table (dbo.ETL_ParaRate) and Main SSIS package, consisting of several For Loop Containers to work in parallel. Of course, this is just a basic framework structure that can be extended in multiple ways.

Let's have a look at possible extensions.

1) The status of a currently processed table may be necessary to know. For that purpose an additional column 'Status' can be added in the table dbo.ETLlog set to:

2) Sometimes the order of transfer of the source tables is important. If that matters, it makes sense to introduce another column 'Priority', for example from 1 (highest priority) to N (lowest priority). In this case the table with Priority = N should be selected, if all tables of higher Priority = (N-1) are already processed.

A Real Life Use Case

A real task from the author's experience included 20+ source databases of identical structure, each containing 60+ tables, i.e. around 1300 tables in total to be transferred per each ETL run. In many of these tables the number of extracted records reached up to 2.5 million with dozens and dozens of columns in the table structures. The batch ETL time limit was set to 45 minutes.

The basic framework was applied here in a two-level option:

In this solution a Processing Unit at the Country level calls not a TL-package for table data transfer – it calls a parameterized reusable SSIS package to transfer data from all 60+ tables from a country database. The country name is used as an input parameter to set the connection to the appropriate database.

The task was successfully solved mainly due to this hierarchical structure of the Main ETL – a real advantage in composing multi-level ETL.

The given approach is rather compact and can be successfully used in a mass data transfer at the initial pre-transformation stage. It makes possible to build flexible, configurable, and scalable ETL processes. It can be much more advantageous and productive when combined with other (not obvious) functionalities that SSIS provides.