When you are facing performance issues caused by problematic queries, one of the top things to look for is the queries consuming a high amount of CPU resources. As DBAs, we have stumbled upon the classic complaint from our end users stating that "the server is slow". Well, when that happens and it’s because of CPU spikes coming from SQL Server, you probably want to know which query (or queries) is causing the issue.

The main objective of this PowerShell script is to give you a quick view of the top 5 high CPU queries from all the instances in your environment, so that you can plan your course of action.

*If you want to have more or less rows returned, you can adjust the value in the queries to customize the script.

In order to use this module, you need to create the core objects found here.

For this particular module, only one table will be created. If you want to add more fields to this table, make sure to adjust the structure within the PowerShell script and adapt the respective logic that will handle that additional fields.

Here is a link from Microsoft’s website if you’d like to dig deeper as to other data you can collect.

There will be times when you simply don’t want to collect this information from all the registered instances you have in your Master Server List. To address this, simply modify the query text inside the variable $instanceLookupQuery within the PowerShell script and you should be good to go.

There’s one very important thing to keep in mind while using this script, and it is the fact that the information that’s obtained from each instance is collected from the system DMVs sys.dm_exec_query_stats and sys.dm_exec_query_plan. This means that the results fetched from each instance will be from those queries whose execution plans are still stored in the plan cache. This will vary from system to system as many things can trigger the queries being flushed from the plan cache, like a memory constrained system, an instance restart, a server restart, or the execution of DBCC FREEPROCCACHE.

One last thing to keep in mind is the fact that the results fetched are for queries whose execution have completed, not for queries currently being executed.

The PowerShell script that creates the above object and inserts data into the monitoring.Top5CPU table is called:

Check Creation of Database and Objects

After running the PowerShell script, we can see the objects that are created. 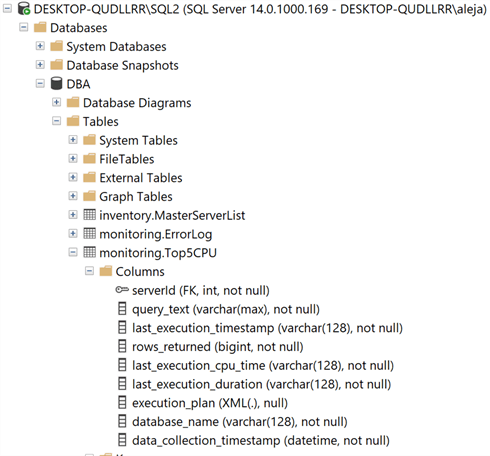 If we query the monitoring.Top5CPU table, we can see the data that has been collected.

I would like to show you not only what the monitoring.Top5CPU table looks like, but also test an example high CPU query in one of my instances and see if it’s captured by the script. Here’s a screenshot of a custom test query that generates high CPU activity. As you can see, it took 38 seconds to complete and it returns only 1 row.

After capturing the data with the PowerShell script, this is what was collected:

Note: The PowerShell script will store only the information from the last execution, no historical data is retained. If you’d like to keep information from previous executions, you would have to modify the script and adapt it to your particular use case.

As you can clearly see, the first row contains the precise query from the above screenshot and it correctly grabbed the information of the amount of rows returned and the time that the execution took. The screenshot was trimmed a bit so that it can be legible to the reader, but one cool thing is that this table also stores the execution plan of the queries (for detailed post analysis, if necessary), which can be very helpful in certain scenarios.

If you’d like to know the SQL Server instance that got the errors, you would have to issue the query like this:

Out of all the high CPU queries captured across all the instances, I would like to see them from slowest to fastest. The trick to make this work is to grab the "last_execution_duration" field and convert the value to seconds, so that it can be properly sorted in the intended way.

How to Check SysAdmin Role in SQL Server with PowerShell

Monitor all Indexes in SQL Server with PowerShell