Create, Populate, and Subset a Pandas Dataframe from a CSV File

Demonstrate how to transfer data via a .csv file from a SQL Server database to a Pandas dataframe and then subset the dataframe in Python.

After creating and populating a Pandas dataframe from a more durable data store, such as a SQL Server table or a results set created by a T-SQL statement, you can readily perform many classic data science applications with Python. Examples include data visualization, modeling, clustering, machine learning, and statistical analyses. When implementing one of these use cases, there is sometimes a need to reconfigure the design of a Pandas dataframe as well as subset the data in it; this tutorial illustrates approaches for achieving these goals.

After reading this tutorial, you will be equipped to create, populate, and subset a Pandas dataframe from a dataset that comes from SQL Server. Selected specific topics covered include:

Learning about dataframes by creating and populating them

You can use whatever developer tool you wish for examining and modifying the Python script files referenced in this tutorial. However, this tutorial demonstrates the use of IDLE functionality, an integrated developer environment, for reading and editing, and running Python code. IDLE downloads automatically with the installation of Python from the Python.org website.

Exporting a .csv file for a SQL Server results set

The following screen shot shows a SQL Server Management Studio (SSMS) session containing a simple query and an excerpt from its results set. The full results set contains close prices and exponential moving averages for the close prices based on seven different period lengths (ema_3 through ema_200) for six ticker symbols (SDOW, UDOW, TQQQ, SPXL, SQQQ, SPXS). By right-clicking the rectangle to the top left of the results set and just below the Results tab, you can save the contents of the results set to a .csv file in a destination of your choice. For this demonstration, the results set was saved in a file named ema_values_for_period_length_by_symbol_and_date.csv within the DataScienceSamples directory of the C drive. 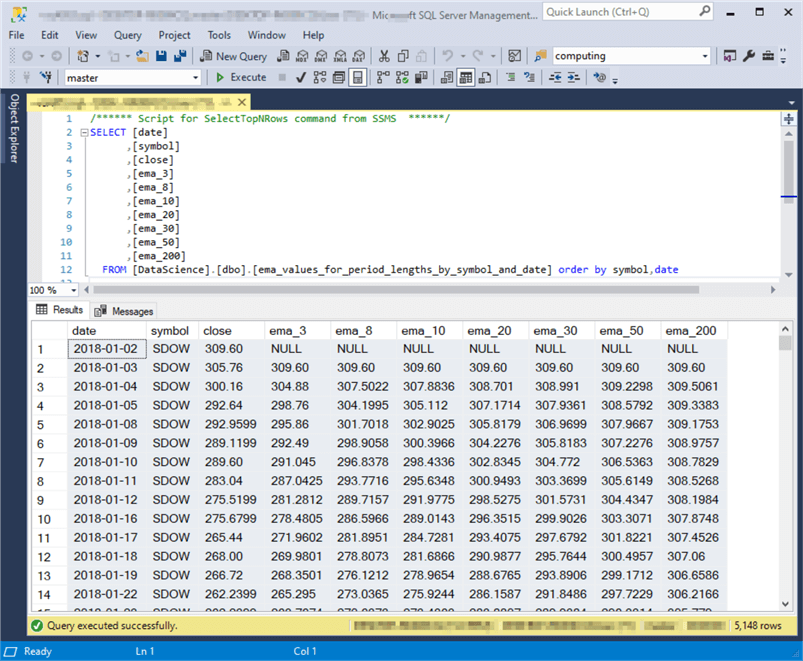 Reading a .csv file into a Pandas dataframe

The following screen shot is a listing from the read_csv.py file that shows how to read the .csv file created in the preceding subsection into a Pandas dataframe. The screen shot also illustrates two different ways to display the contents of the dataframe. 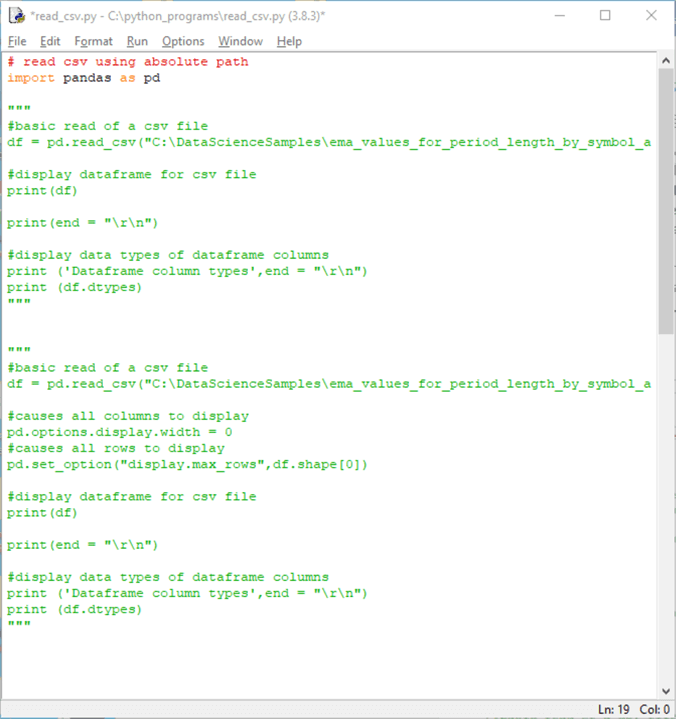 The top Python script in the preceding screen shot generates the following output in the Python Shell window. 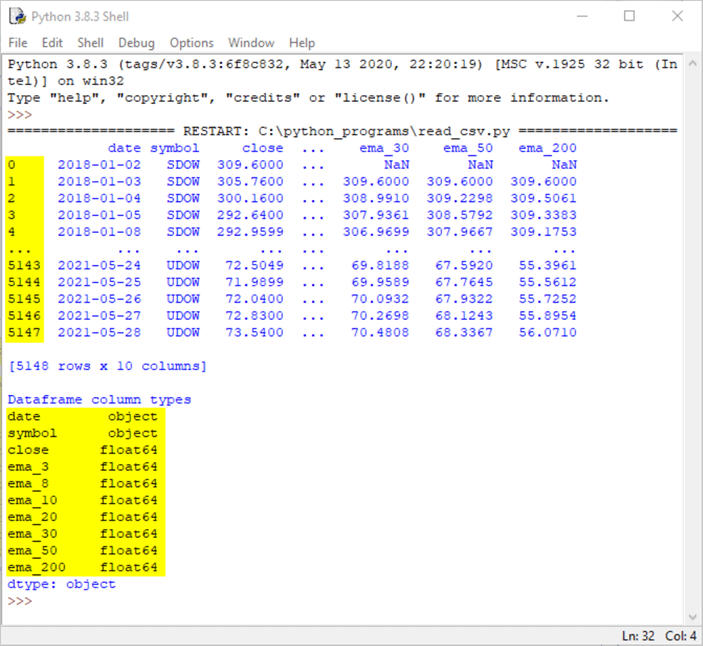 The next two screen shots show excerpts from the output from the second commented script block in the read_csv.py file listing.

The first screen shot is for the top ten dataframe rows.

The second screen shot is for the bottom four dataframe rows and the column metadata for the dataframe.

Here is a Python script to perform the conversion. There are two major parts to the script. First, it illustrates how to reconstruct the dataframe from the .csv file created in the previous section. The initial dataframe is based on the application of the csv_read function for the .csv file. Next, three additional Python statements display the dataframe contents as well as reveal metadata about the dataframe.

The second major portion of the script commences with a single-line comment about replacing the original index for the dataframe. 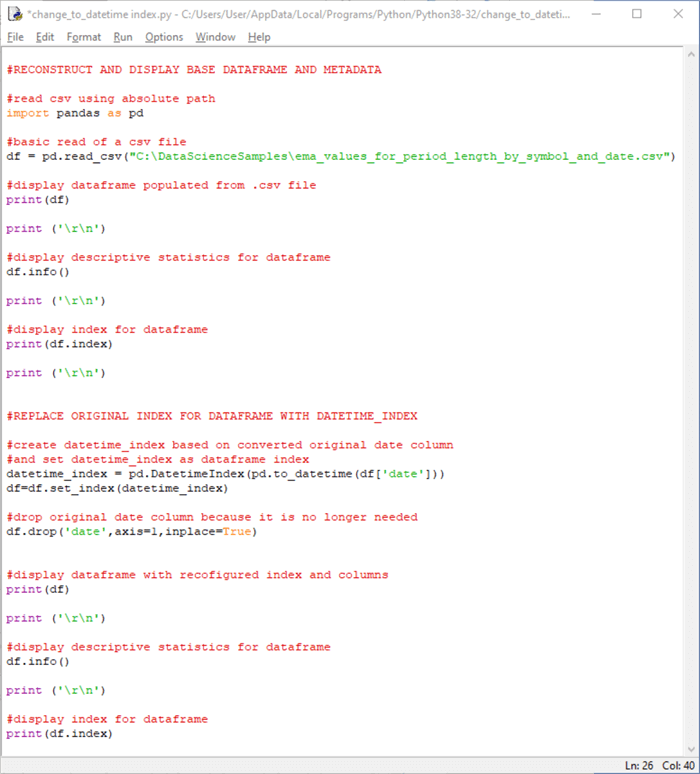 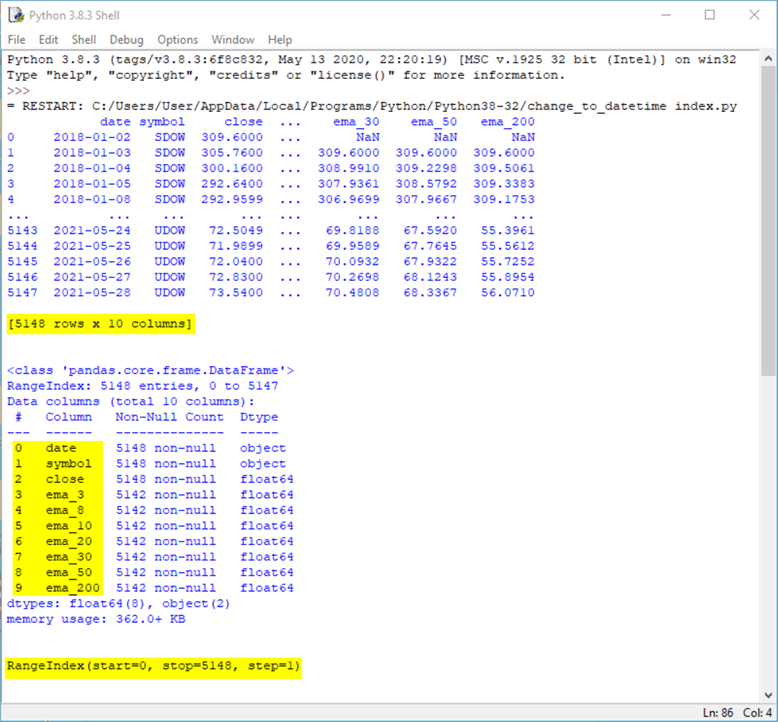 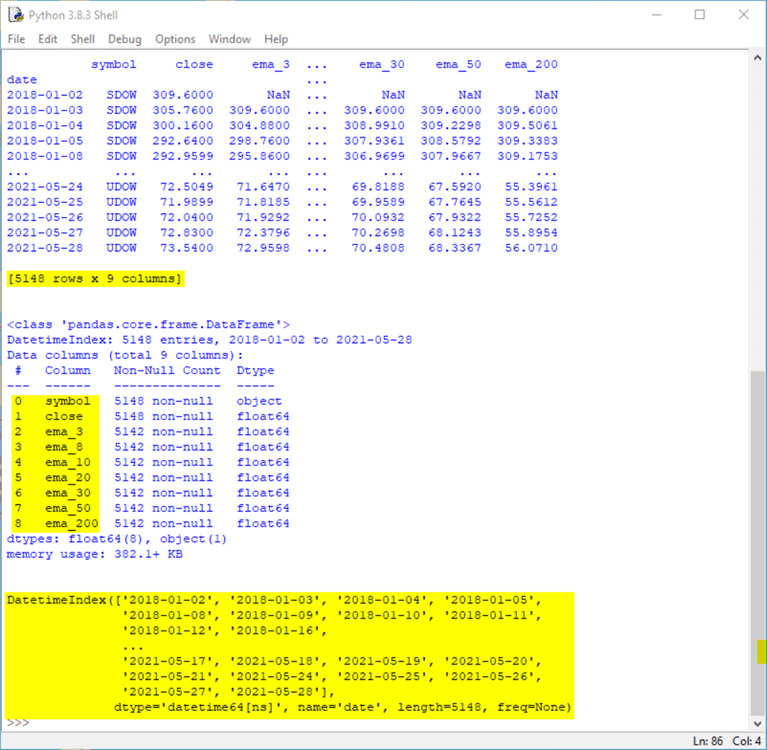 How to subset columns and rows from within a dataframe

It can often be useful to extract a subset of columns or rows from a dataframe. This can make it easier to focus on what matters most in a data science project or to exclude columns with an unacceptably high proportion of missing values. Some data science models, such as random forests, call for using multiple sets of columns and rows and then averaging the results across different sets of columns from a source dataframe.

Extracting a subset of the rows in a dataframe can also be useful for data analysis projects. For example, the sample dataset for this tip contains close price and moving averages with different period lengths for six symbols. If you build a model to predict prices for one symbol, will it predict prices validly for another symbol? Are there sets of symbols that exhibit similar price trends over time? By extracting different sets of rows that match different symbols, then you can answer questions like those just posed.

No matter the reason, it can often be useful to form a new dataframe based on a subset of columns and/or rows from a larger source dataframe.

Compiling a row subset based on boolean values

The following screen shot shows the Python script for creating a subset of the rows for the sample dataframe used with this tip. The script file has the name df_filter_query_demo_1.py. The header for the IDLE window in which the Python script displays also indicates the file resides in the python_programs directory of the C drive. The numbered red bullets identify parts of the script. 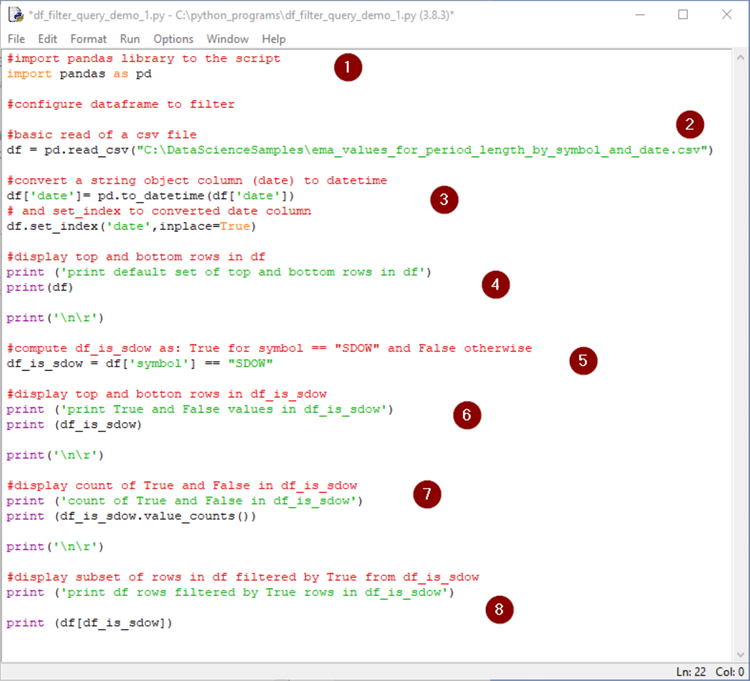 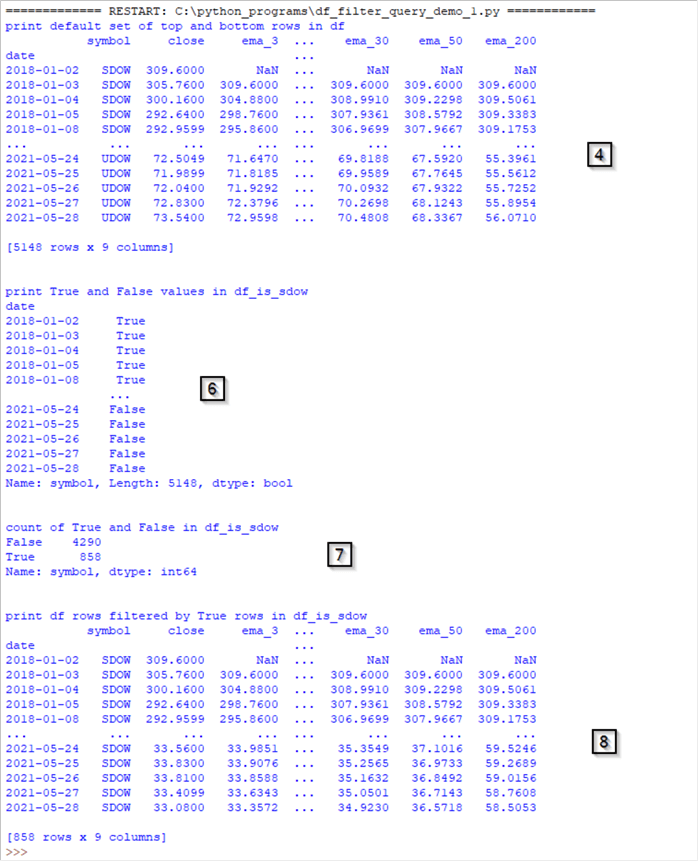 Selecting a subset of one or more columns from a dataframe is very straightforward. Merely take the original dataframe name, such as df, and follow it with square brackets. Then, include either one column name in quote marks (“column_name”) or a comma separated list of two or more column names where each name is in quote marks. Here is a Python script to illustrate both approaches. There are three major sections to the script. 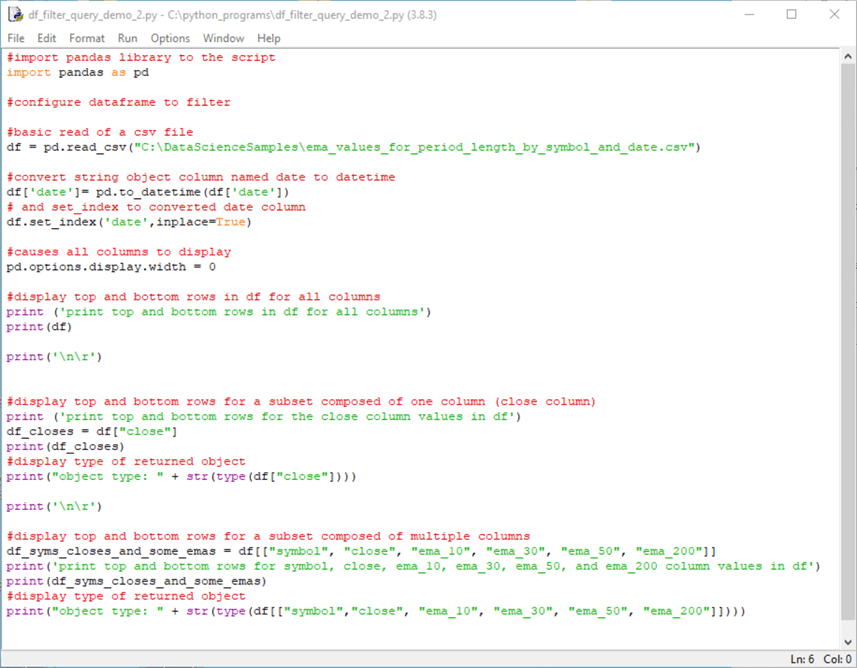 Here is an image of the output from the preceding script in the Python Shell window. 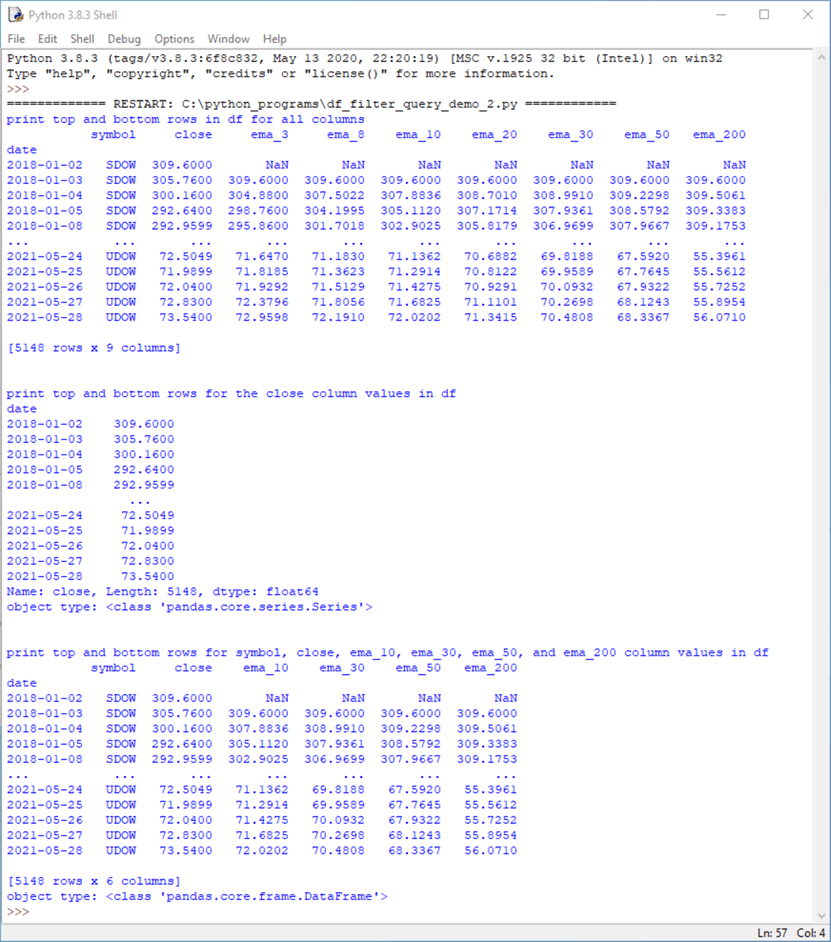 Instead of creating filtered dataframe row sets based on boolean values as in the “Compiling a row subset based on boolean values” subsection, you can use criteria directly inserted into dataframe column selection criteria brackets. Unlike the dataframe brackets in the prior subsection, these brackets filter rowsets with specified settings. This subsection illustrates two demonstrations on how to achieve this kind of row filtering with one or two distinct criteria.

The script for implementing both demonstrations appears below. The script is divided into three parts by repeated single-line comment markers (##f…###) across the width of the IDLE window. 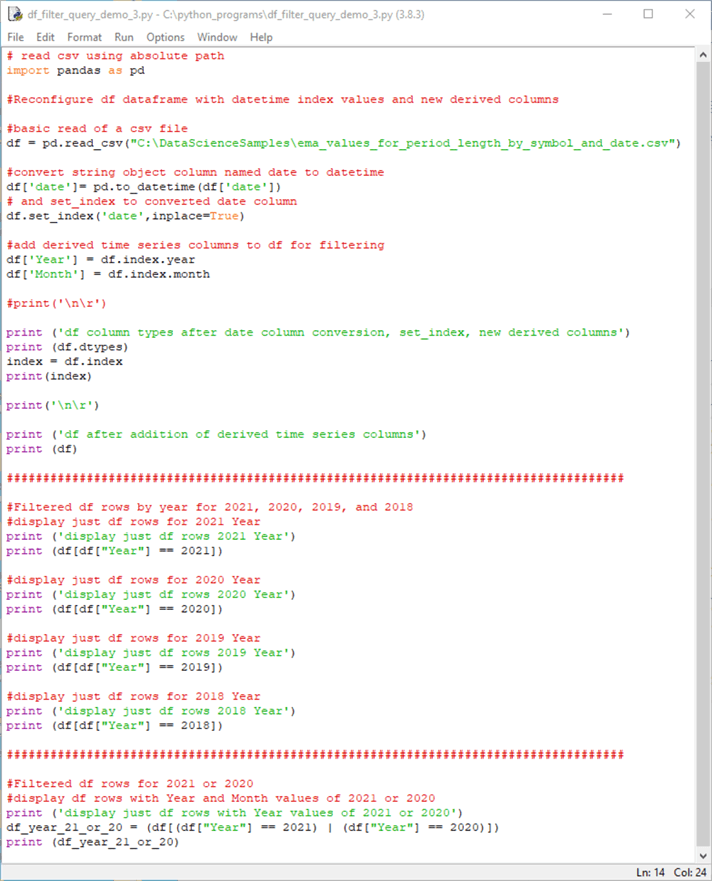 The following screen shot shows the metadata along with the first and last five rows for the source dataframe in this subsection. 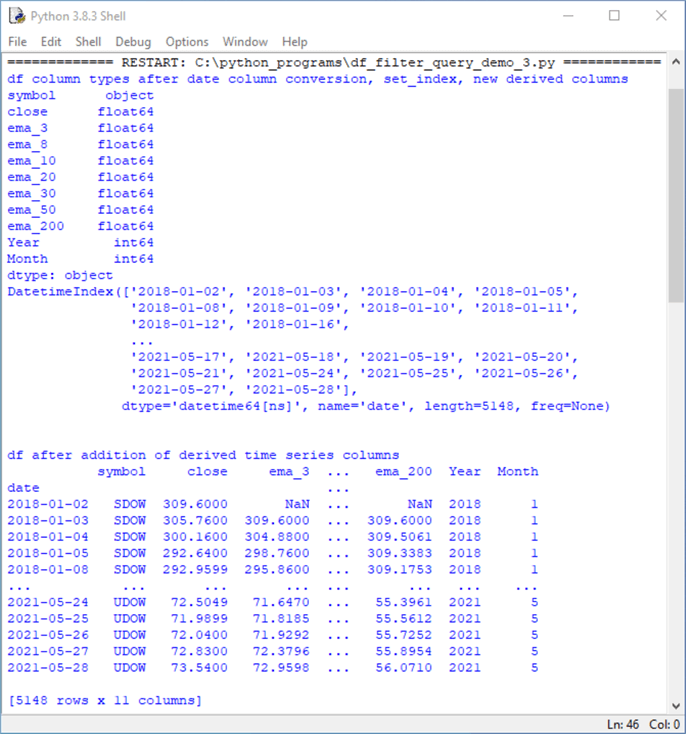 The following table summarizes key design features and output from the first example.

The last screen shot in this tip shows the output for the script that creates a filtered dataframe based on two criteria – one for rows with a date in 2020 and another for rows with a date in 2021. The following screen shot shows the two criteria generate a filtered dataframe with 2130 rows. This outcome is consistent with the sum of the dataframe row counts for 2020 (1518) and 2021(612). 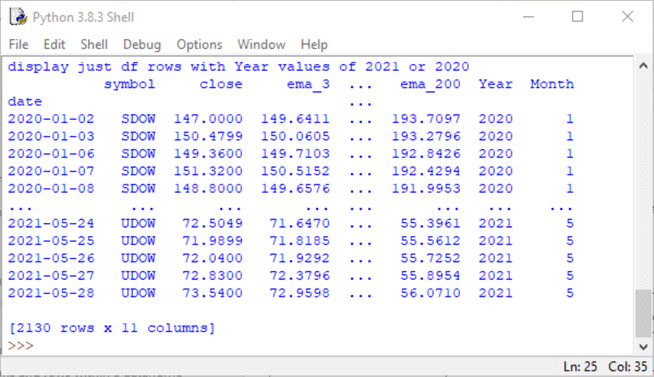 You may be wondering which is the best approach (boolean values or criteria expressions) to creating a filtered dataframe based on the rows in a source dataframe. The answer may be that it depends.

This tip’s download file contains six files to help you get a hands-on feel for implementing the Python solutions in this tip.

After verifying the code works as described with the sample data file, you are encouraged to use your own custom data files. This will most likely require changes to the Python scripts in this sample that depend on column names and row values in your custom sample data.

Understanding the Capabilities of Snowflake