Here are some additional related articles on this tool:

After the initial load, I needed to build a process to update the SQL Server database for the data changes occurring in the MySQL database.

This tip focuses on solving some issues that arise when you want to automate the merging of the data once the migration is complete. It is impracticable to continue utilizing the migration assistant once the database has been moved to a new SQL Server database. If the MySQL data can be queried from SQL Server Management Studio (SSMS) then the data can be merged by using a MERGE T-SQL statement in a SQL Server. We will look at how this can be done by creating a linked server from SQL Server to the MySQL database.

To query the data on the MySQL database, a linked server can be created in SSMS and after the linked server is created, you just have to create a MERGE statement, easy right? This is where a few problems came up that I would like to share.

Let us start by creating an ODBC Data source that will be used by the linked server.

A linked server needs to use an ODBC Data source and needs to be configured on the system where you will be working with SSMS.

Follow the steps below to create the ODBC Data source: 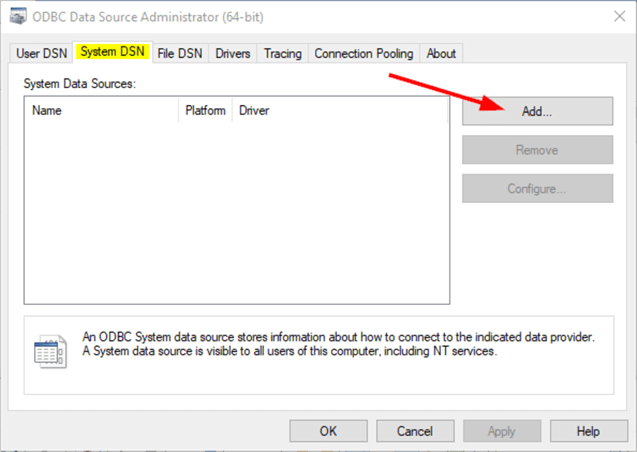 On the Create New Data Source popup (image below), select the MySQL ODBC 8.0 ANSI Driver and click Finish. If you do not have an ODBC Driver installed for MySQL, you can download and install the driver from: MySQL Product Archives. 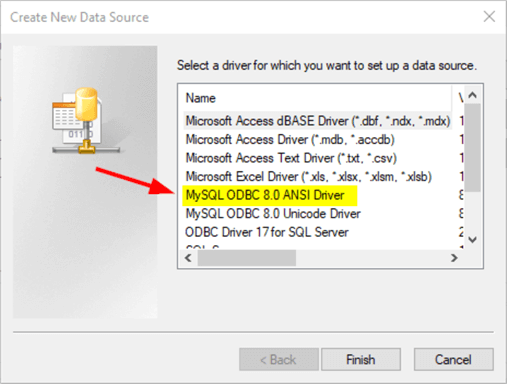 Complete the textboxes (image below) in yellow as follows: 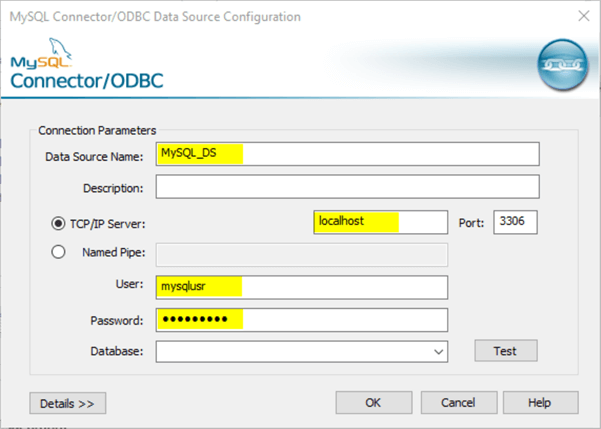 Click on the OK button to create the ODBC Data source and it should be visible in the ODBC Data Source Administrator Window’s System DSN tab. 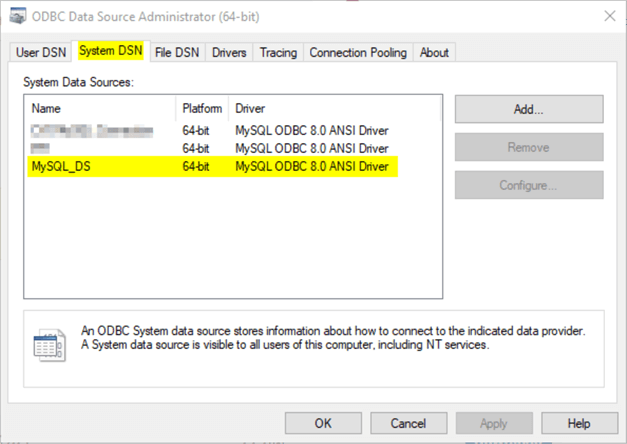 In SSMS, log in to SQL Server where you will be migrating the data. At this stage, it is assumed the database has already been created in SQL Server.

The database used for this tip will be the HRDatabase, which contains two tables: Companies and Employees.

In SSMS Object Explorer, expand the SQL Server that you are logged in to, expand Server Objects, expand Linked Servers, and if you have any previously created linked servers they will be visible here. In this case, we will be creating the first linked server on this SQL Server. 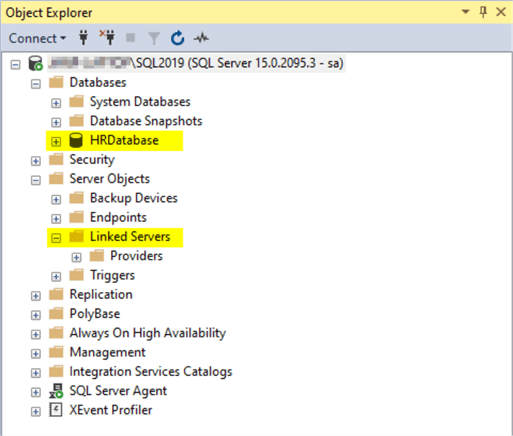 Right-click on the Linked Servers folder and select New Linked Server which will open up the new linked server window. 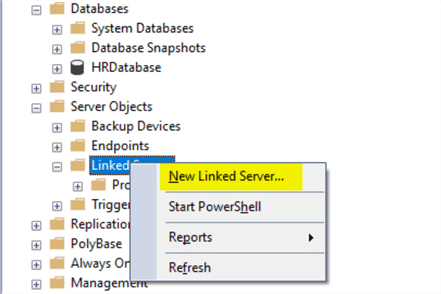 Below is the New Linked Server window, complete the textboxes as highlighted in yellow. 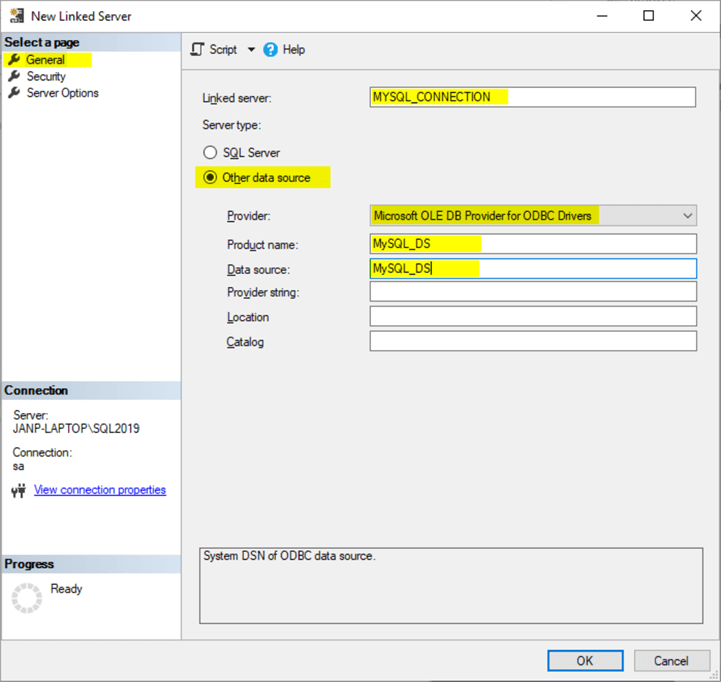 On the General page:

On the Security page: 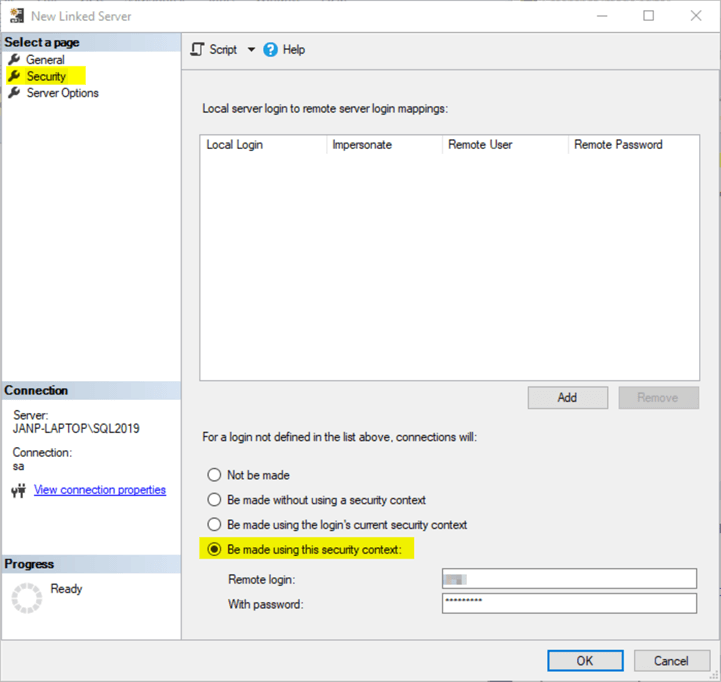 On the Server Options page:

Next, click OK to create the linked server. If the login details are wrong, you will be presented with an error.

After you have created the new linked server, it should be visible in the list below the Linked Server folder. If you expand the newly created linked server, you should see the databases on the MySQL server via the linked server as shown below. 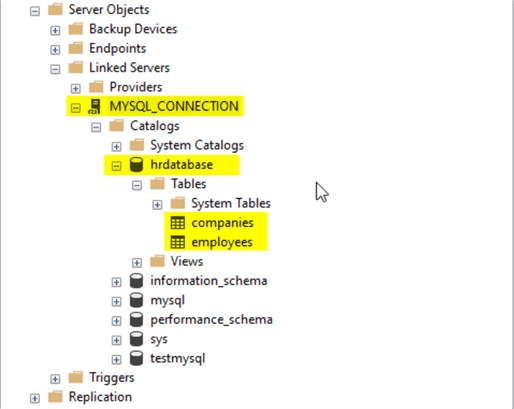 Now that the linked server to the MySQL database has been created and you have the details for queries:

This select query should be straightforward:

When running the above query, we get the following error:

Msg 7356, Level 16, State 1, Line 39
The OLE DB provider "MSDASQL" for linked server "MYSQL_CONNECTION" supplied inconsistent metadata for a column.
The column "CreateDate" (compile-time ordinal 6) of object "'hrdatabase'.'companies'" was reported to have a "DBTYPE" of 133 at compile time and 135 at run time.

We will cover how to get around this error below, but another option is to use the OPENQUERY syntax. See OPENQUERY (Transact-SQL) for more details.

The syntax is as follows:

The query could be rewritten as follows:

See the result set below which works perfectly.

The error we got above, was due to the CreateDate column. After spending some time to try and solve the error, I managed to find the problem.

The first sentence of the error reads:

If we open the window where the ODBC connection was set up: MySQL Connector/ODBC Data Source Configuration and click on the Details button, then on the Metadata tab and you will find an option at the bottom: Don’t use INFORMATION_SCHEMA for metadata. Check the check-box next to it and click the OK button. See the image below. 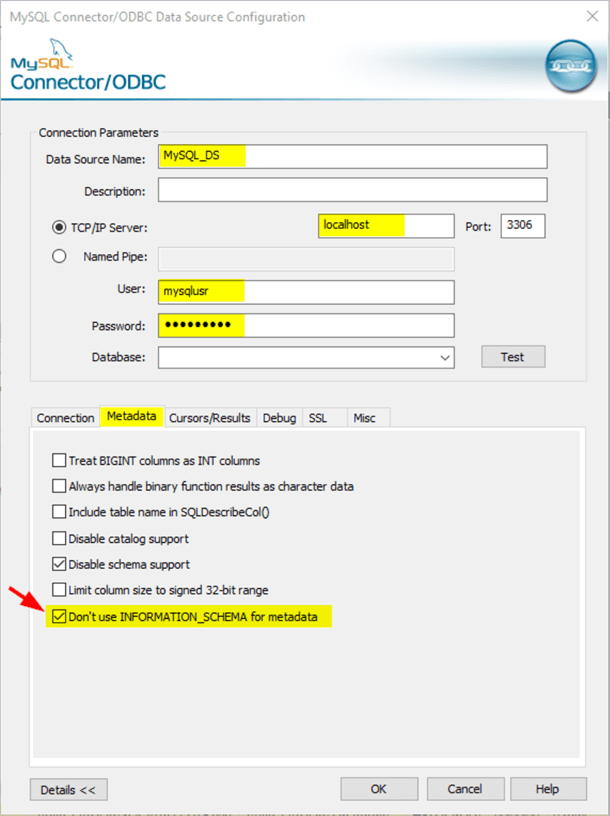 The above option (Don’t use INFORMATION_SCHEMA for metadata), was implemented to fix the bug in the MySQL Connector/ODBC: "A buffer overrun inside SQLColumns() caused Connector/ODBC to unexpectedly halt."

Now you can try the normal select query again on the companies table and see the result.

SQL operations to sync the data

Below are some SQL statements that can be used to sync the data from the MySQL (Linked) server (source) to the MS SQL Server (target) database.

This is the target server to sync the data to:

Use an INSERT..SELECT statement to update the data in the target table that was created above:

Use a MERGE SQL Statement to do the below operation to the target table:

In this tip, we worked through setting up a linked server on a SQL Server instance to be able to do SQL queries from a MySQL database and highlighted some of the issues that might be encountered in the process.

We also looked at some SQL statements to create a target table, do an INSERT from a SELECT query and also creating a MERGE statement to do the syncing of the data between the MySQL (linked) server and the SQL Server databases.