Treemap charts can be extremely helpful to visualize categorical data. In this tutorial we look at how to use SQL Server and Python for creating treemap charts from SQL data sources, along with what colormaps are and how to apply them to treemap chart elements.

A treemap chart is composed of rectangular tiles that can reflect the percentage change or counts in an underlying data source. For example, if a query returns a results set value for each of six categories, the treemap chart would display six rectangular tiles where each tile is sized proportionally to its corresponding results set value. In this sense, a treemap chart can function in a parallel way to a bar chart or a pie chart. This is because the height of bars in a bar chart or the size of slices in a pie chart can also be dependent on the counts or percentage change values for underlying data from a SQL Server query.

Python can generate treemap charts with the help of the squarify and matplotlib external libraries. The squarify library can accept a positive number for each category in a set and transform the set of numbers into coordinates for rectangles. The matplotlib library can display a treemap chart filled with the rectangles from squarify. In addition to positive numbers that can be normalized to the size of rectangular tiles for each category, the plot method in the squarify library can also accept other parameters for specifying labels and colors for the tiles in a treemap chart. Labels and colors in treemap charts can reveal tiles as belonging to a type of category or emphasize significance of the size of tiles.

SQL source data for this tip

The following script excerpt shows the T-SQL code for extracting symbol stock prices for the start and end of the first quarter as well as the performance score from the start through the end prices. Notice that the performance score is the difference from the start through end price in a quarter divided by the start price in a quarter. The source data for the queries below follow from the DataScience.dbo.stooq_prices table. A prior tip describes the process for creating and populating this table.

The download for this tip contains the code excerpt below as well as an analogous code segment for computing performance during the second quarter.

You can create a treemap chart with a handful of code lines.

After running the code in the preceding Idle window, Python responds by showing the following display window. There are two main points to note about the display window.

The abs_performances array values are normalized by the squarify library in Python.

If it was not immediately obvious to you which tiles are for which symbols, you are normal. First, there are no tile labels linking the tiles to symbols. Second, it is not so easy for humans to relate areas to values. Bar charts are better than treemap charts when you need to precisely link values to chart elements. Lastly, if two the tiles, which both have the same size, are for different symbols then there is no way to tell which tile is for which symbol. The next section shows how to address these issues by assigning labels to tiles. 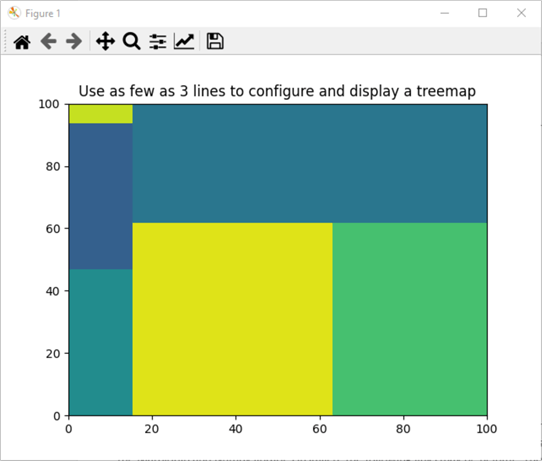 It is common to show treemap charts without showing the axis scale values. You can do this with a single line of code. The following Idle window shows the code directly below the line invoking the plot method from the squarify library.

The line is plt.axis('off'). This line sets the axis property from the pyplot api to off for the treemap chart. This axis property is set to on by default.

Here's the chart that displays when you run the preceding script. While the tiles are different colors, they appear to be same size. The most important point, of course, is that there are no scale axis values on the treemap chart below. 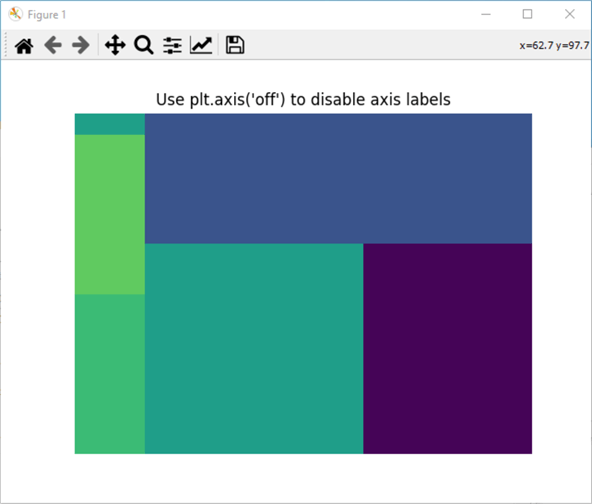 Adding tile labels and pads between tiles to treemap charts

The prior two treemap charts failed to identify the symbol performance represented by each tile. Also, it is possible for tiles to become difficult to distinguish when their colors are nearly the same and the tiles are contiguous. The following script addresses these issues in two ways. 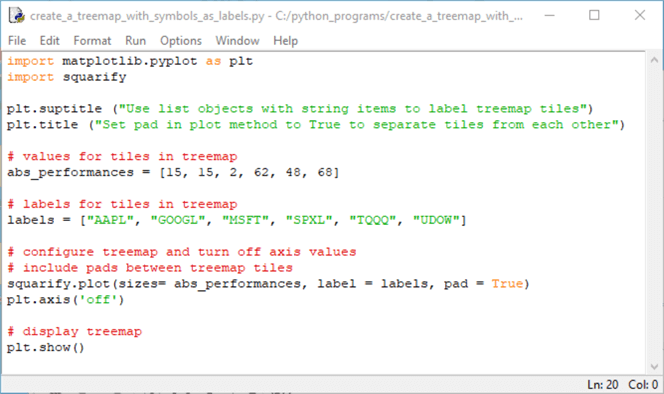 Here's an image of the display window when you run the preceding Python script. Each tile has a label that corresponds to the symbol that it represents. Also, there is white border around each tile. This border feature is especially convenient for distinguishing between the tiles for AAPL and SPXL symbols, which have very similar colors. 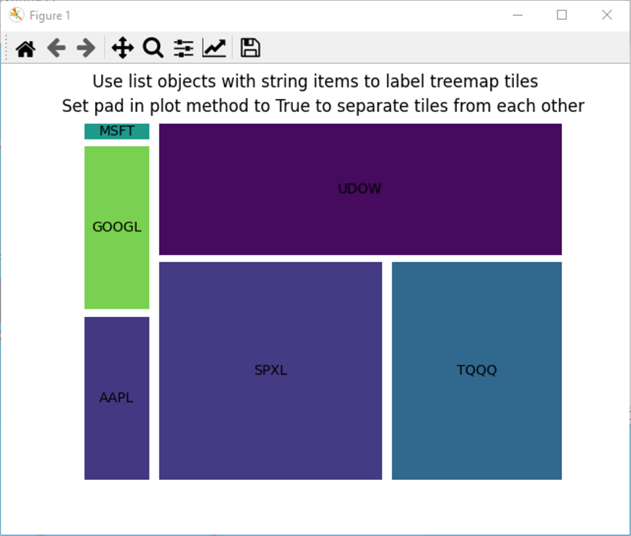 If you examine the script below, you can observe that it contains two statements with plt.show() functions: one for an initial treemap chart, and a second one with code for a second treemap chart. The second chart displays a better looking treemap chart with label values for both symbols and performance score values. The difference is that the first treemap uses default settings for the size of the chart, and the second treemap uses custom settings for the size of the chart. The reason for the difference is the tile labels sometimes overflow their tile borders with the default figure size settings. By using a custom figure size setting, the code for the second treemap chart is able to display all tiles without labels overflowing border boundaries. 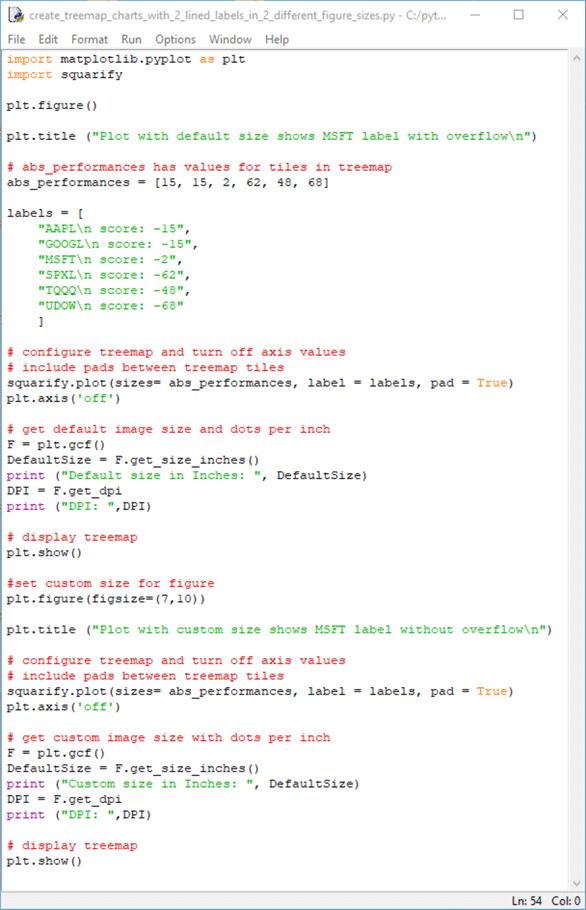 Here's the treemap chart from the first plt.show() statement. Notice that the labels for the MSFT, GOOGL, and AAPL tiles overflow their border boundaries. This is especially noticeable for the MSFT tile. 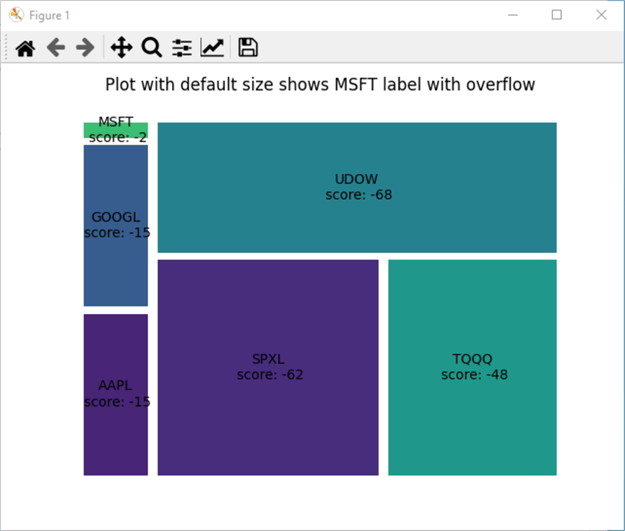 Here's the treemap chart from the second plt.show() statement. Notice how there is no overflow for the labels beyond tile borders for the MSFT, GOOGL, and AAPL tiles. 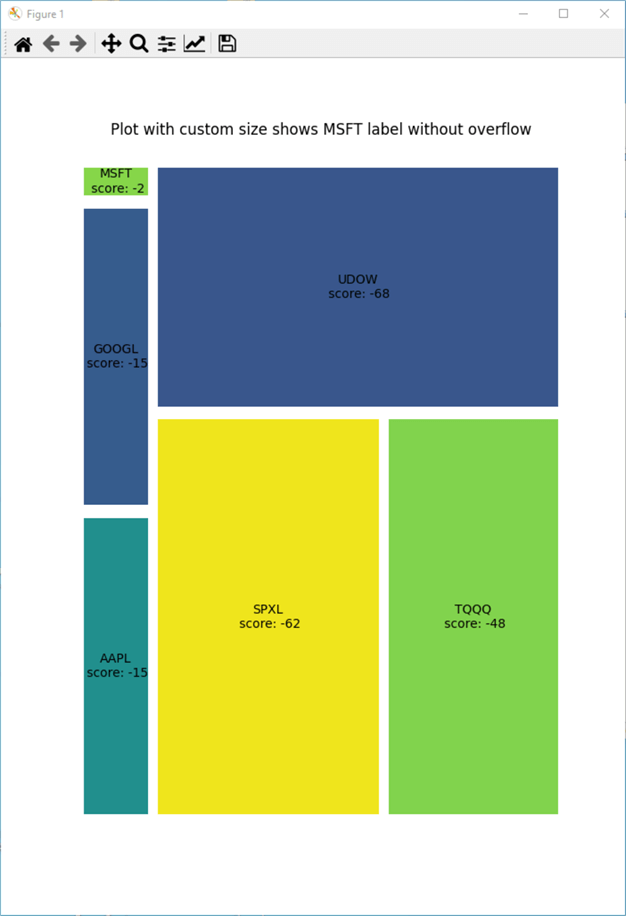 The first method for assigning colors to tiles is illustrated in the following Python script file. The script displays two treemap charts.

The list object, which is named labels, holds the symbol values for each ticker symbol in the sample data. There is only one list object because the same set of symbols are tracked in the first and second quarters.

The treemap chart code for the second quarter follows the same design as for the first quarter, except it assigns pos_performances to sizes and pos_colors to color. Additionally, the treemap chart title is updated to reflect that the chart is for positive performance values. 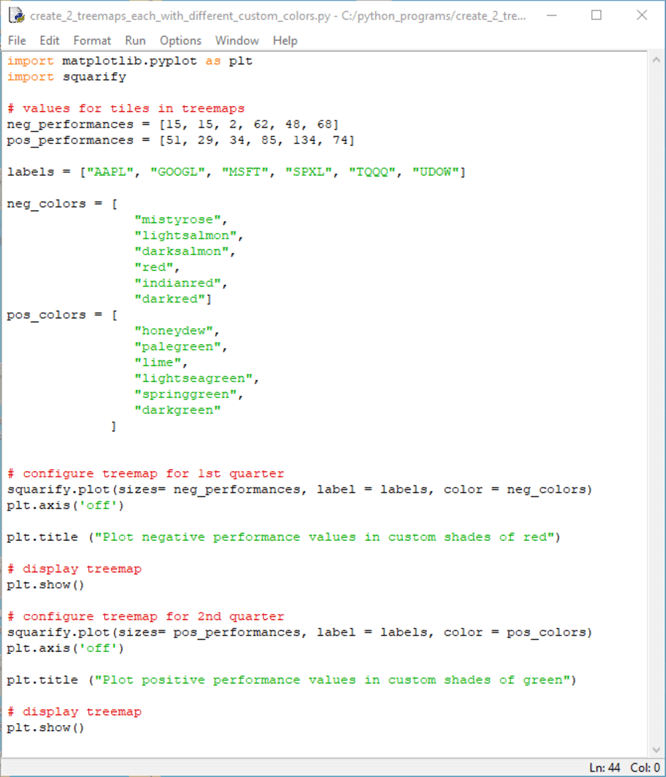 Here's what the treemap chart for the first quarter looks like. 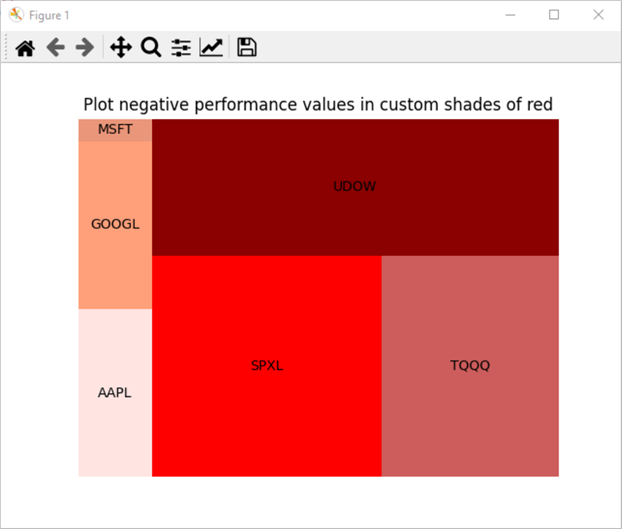 Here's what the treemap chart for the second quarter looks like. All the tiles for this treemap chart are different shades of green. 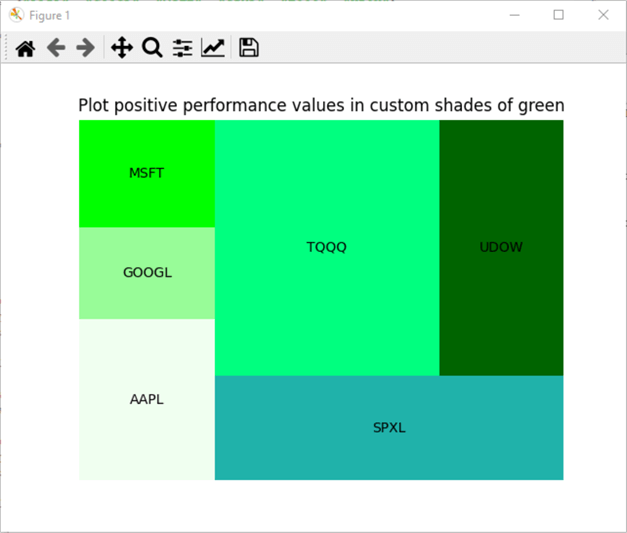 As indicated above, the second approach for assigning colors to tiles in a treemap chart assigns colors based on size values instead of label values associated with tiles. The code for this second treemap chart also illustrates the use of a colormap. A colormap is like a built-in color palette. Matplotlib can use a moderate sized collection of colormaps. The script below illustrates the use of the Reds colormap, which has an extensive collection of sequentially arranged red hues.

This following script matches the indices for hues in the Reds colormap to the values in abs_performances array. The key sections of the script are preceded by comments of "apply a colormap(cmap) to sizes" and "configure treemap to apply colors to tiles based on Reds colormap hues and abs_performances values". The basic logic of the approach is as follows 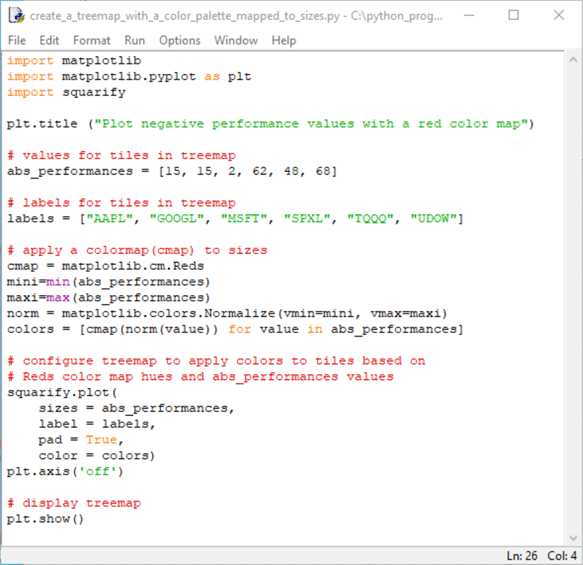 Here's what the treemap chart from the preceding script looks like. 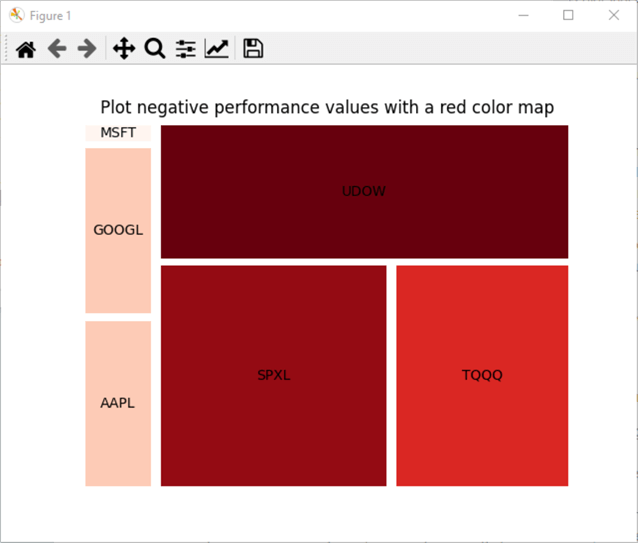 This tip presents and describes a collection of Python scripts for implementing a basic treemap chart and selected intermediate and advanced features for creating and displaying treemap charts with Python. The treemap charts show data based on a SQL Server results set. An effort has been made to present content in a way that enables you to replace the sample data in scripts with your own data. Therefore, one next step is to use the templates with your own data.

Python along with squarify and matplotlib external libraries are a powerful way to create and display treemap charts based on categorical data from SQL Server and other data archives. The matplotlib library is a very rich (highly configurable and potentially complex) development environment for creating charts. If you wish to learn more about creating treemap charts and other kinds of charts with Python than are presented in this tip, you will need to learn more about how to program Python and the Matplotlib library. Here are some links for getting started on learning more (here, here, here, and here).

The download for this tip includes six python script files with the sample data embedded in each file. You can modify the script files by replacing the data used in this tip with your organization's custom data.