Provide a series of Python templates for creating pie chart data visualizations based on results from SQL Server queries. Begin with an initial template that introduces Python novices about how to create a basic pie chart. Present subsequent templates that build on the basic pie chart template to add slice identifiers, explode pie slices, present side-by-side pie charts for two different sets of counts, and illustrate how to assign custom colors to pie slices.

A popular adage is: "a picture is worth a thousand words". When working with counts for different categories, a pie chart is a common way to present results. This tutorial shows how to create a variety of different pie charts for displaying counts based on output from SQL Server queries. Whenever you are responsible for showing to others SQL Server query results with counts by category, this tip may help to make your data more impactful.

The initial SQL Server source data for this tip is a query results set that compares the outcome of four models for picking buy and sell dates for financial securities based on exponential moving averages. A prior tutorial, Creating and Comparing SQL Time Series Models, demonstrates how to obtain the outcomes with SQL Server for the data charted in this tutorial. The objective of the comparisons in the prior tutorial and the pie charts in this script is to show which model generates the highest returns for securities traders.

The model comparisons from the prior tip are summarized in the table displayed below; the data are from SQL Server that are copied to an Excel workbook. 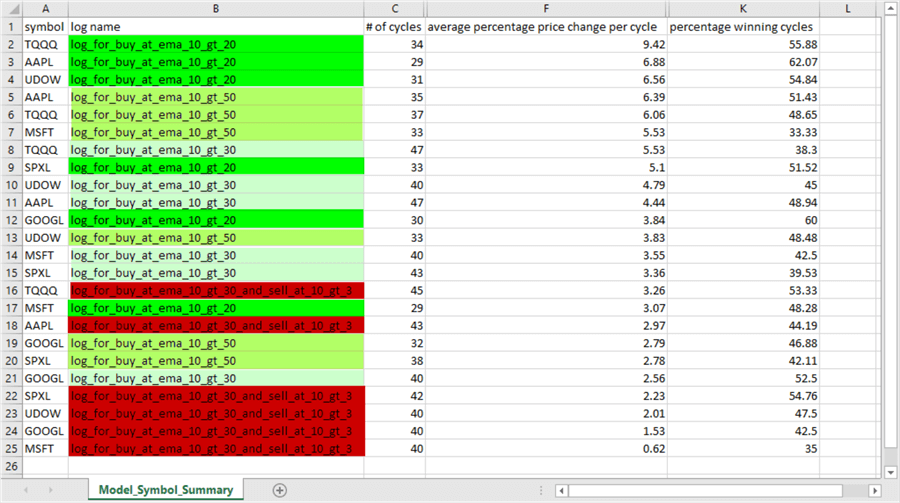 Here's an Excel worksheet excerpt that shows counts by model for the top and bottom halves for each model-symbol combination from the preceding display.

The remainder of this tip presents pie charts created by Python for the preceding display.

Python script for a basic pie chart for beginners

One especially popular external library for helping Python to visualize data is Matplotlib. This library is often used with another external library named Numpy. For readers who do not already have access to a working version of Python with the Matplotlib and Numpy libraries installed, the following links may be helpful. The IDLE code editor for Python, which is used by this tip, can be downloaded automatically when you install Python from the link below. 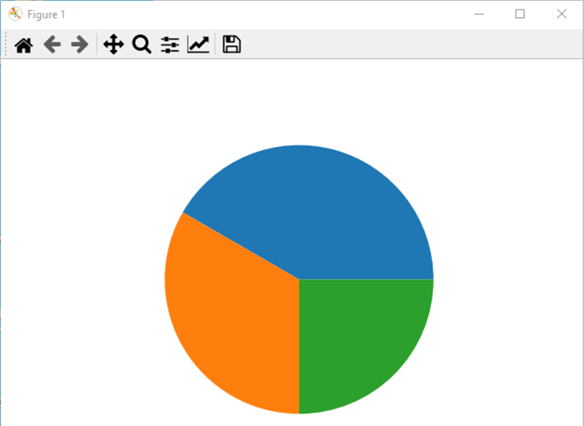 Adding labels and percentages for the slices in a pie chart

The next screen shot replaces the use of the native Python list elements for pie slice counts with Numpy array object elements. The code generates two charts – one with labels and the other with labels and percentages corresponding to the size of each pie slice.

The Numpy library is assigned an alias of np in its import statement. The syntax for specifying an array is np.array([comma-separated array element values]).

The first chart generated by the following script is for a figure with labels for the pie slices. The code for the pie chart appears after the import statements for the Matplotlib and Numpy libraries. The comment line before the code for the first plot is "#pie chart with numbers and labels". 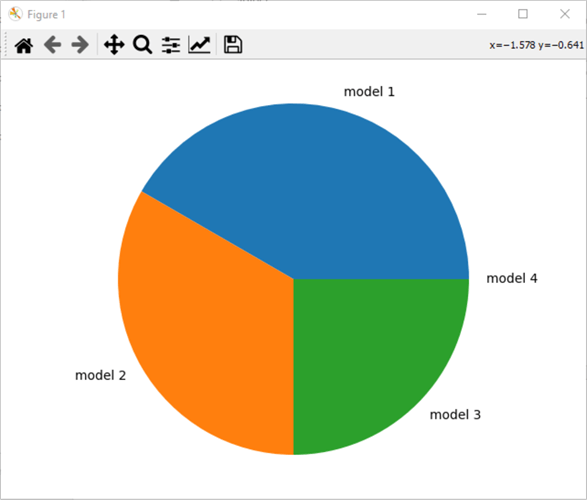 The code for the second pie chart adds percentages that denote the proportion of the pie chart allocated to each slice. Matplotlib can compute these percentages with the inclusion of the autopct() function as a pie method argument. The autopct function takes the size values of the slices and sums them to return a percentage value that corresponds to the relative size value for each slice.

The following image shows the second pie chart from the preceding script. As you can see, the percentage values sum to 100% percent. Additionally, model 4 corresponds to a value of zero percentage value. 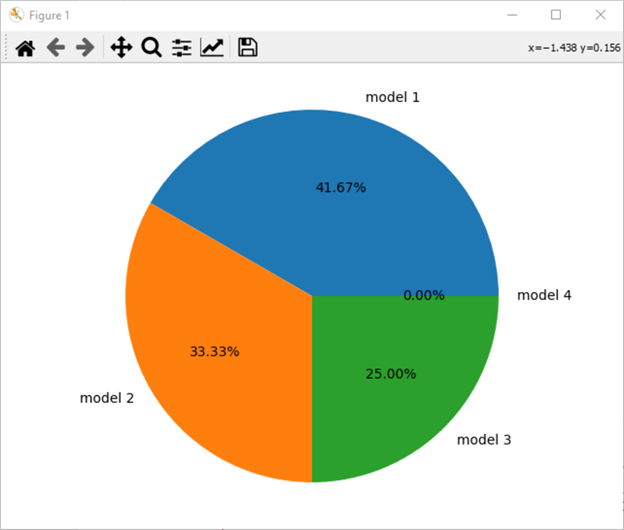 Selected slices of a pie chart may be exploded so that they are set apart from the other slices in a pie chart. You can use the explode parameter of pie method for an axis object to designate which slices are displaced from the other slices as well as how far slices are exploded (or displaced). The script in this section reverts to using a list object for setting the size of pie slices.

The following script file (exploded_slices.py) presents three examples of selectively exploding slices within a pie chart. The script for the first pie chart designates an explode parameter value of .1 for the second element in the explode list object. A value of .1 represents the smallest amount of displacement for a pie slice. The explode list object is assigned to the explode parameter of the pie method for the ax object. This assignment causes the second slice to be exploded to a negligible degree from the remaining pie slices. The show method in the script displays a pie chart based on the first code block in the script below. 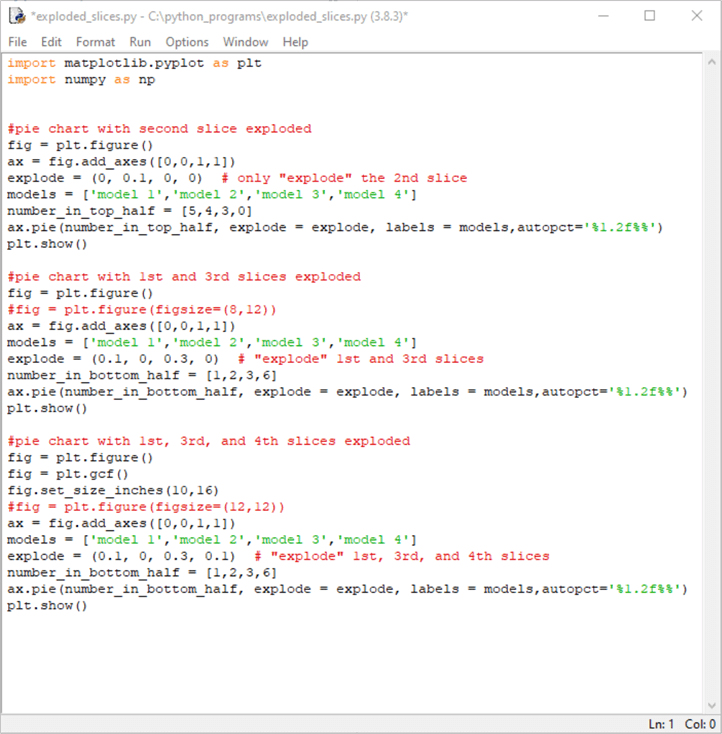 The following pie chart image shows the second slice (for model 2) exploded from the remaining slices in the pie chart. You can optionally click the file icon on the menu bar to save a pie chart image to a Windows folder. 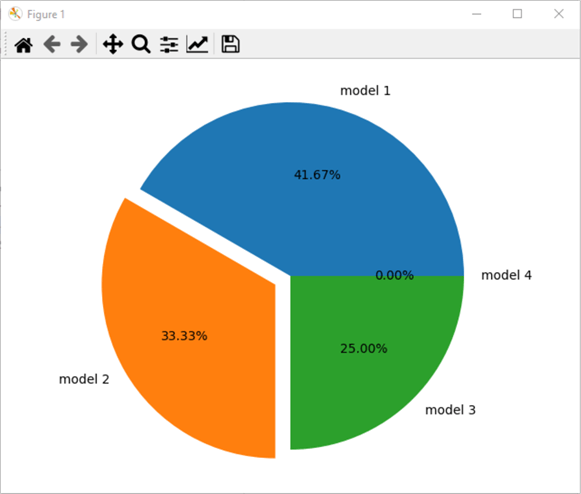 The next pie chart is different from the preceding pie chart in several respects.

The image for the second code block appears next. 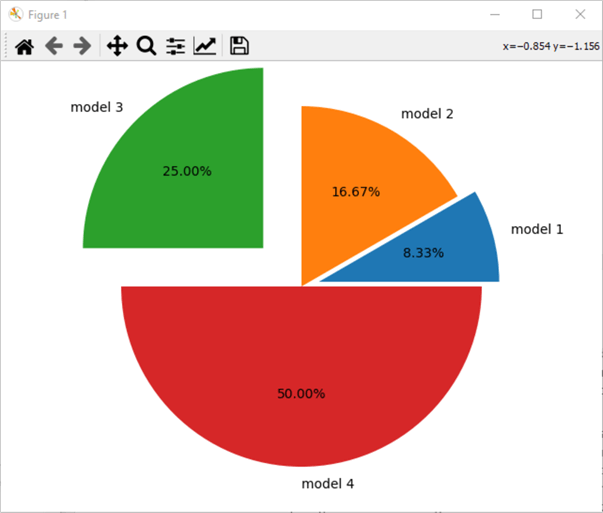 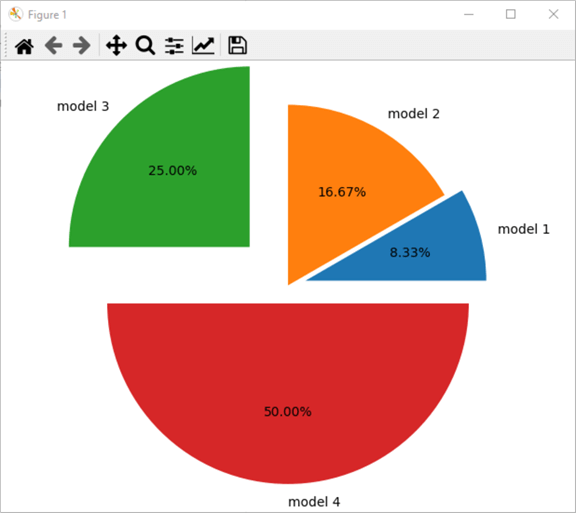 You can also optionally save one or more chart images by clicking the File icon in the window displaying a pie chart. The following screen shot shows from Windows Explorer a set of thumb nail pie chart images for three pie charts with exploded slices. The selected chart image is for the third chart image in this section.

The example is for a single figure with two pie charts. The pie charts are side-by-side in the figure. Each pie chart is populated with different data. Recall that the underlying source data table sorts rows by average percentage change for each combination of model and symbol. There are twenty-four combinations from four models with each of six symbols.

Here is what the figure for this section looks like. 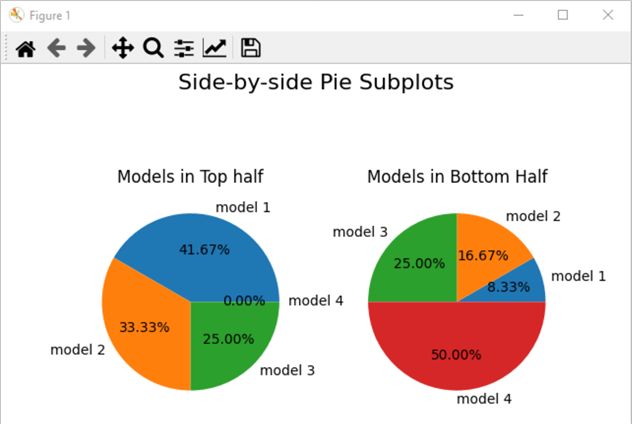 Here's the script for the preceding chart. 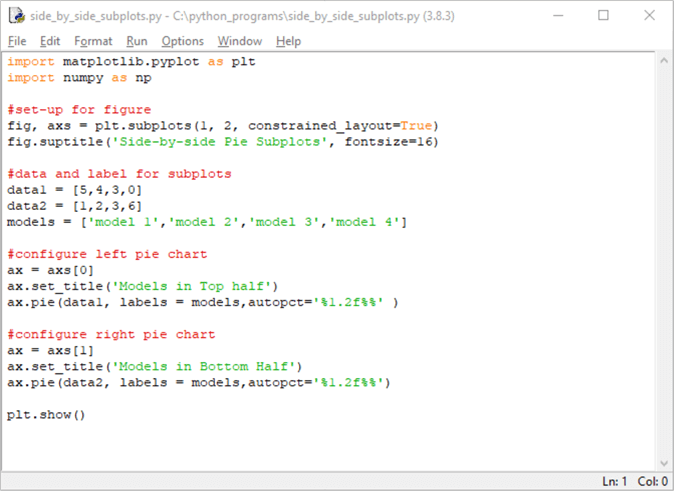 Wedge is another term by which Matplotlib refers to a pie slice. Edgecolor is a property name for the border color around pie slices. You can set properties for a pie chart's wedge border with wedgeprops. The use of wedgeprops is optional, unless you want to set special properties, such as the border color for pie slices, through it.

Here's what the pie charts for this section look like. 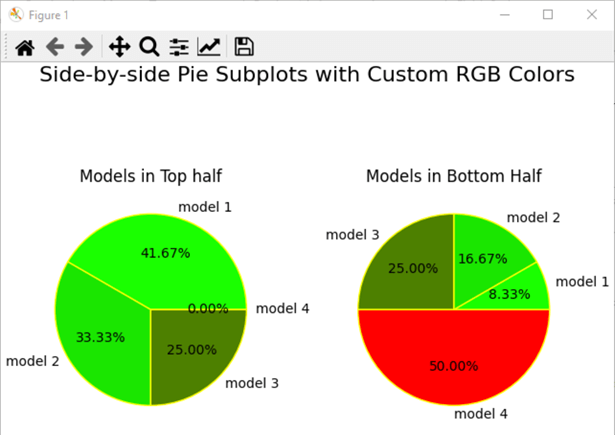 Here is the script for the preceding figure. 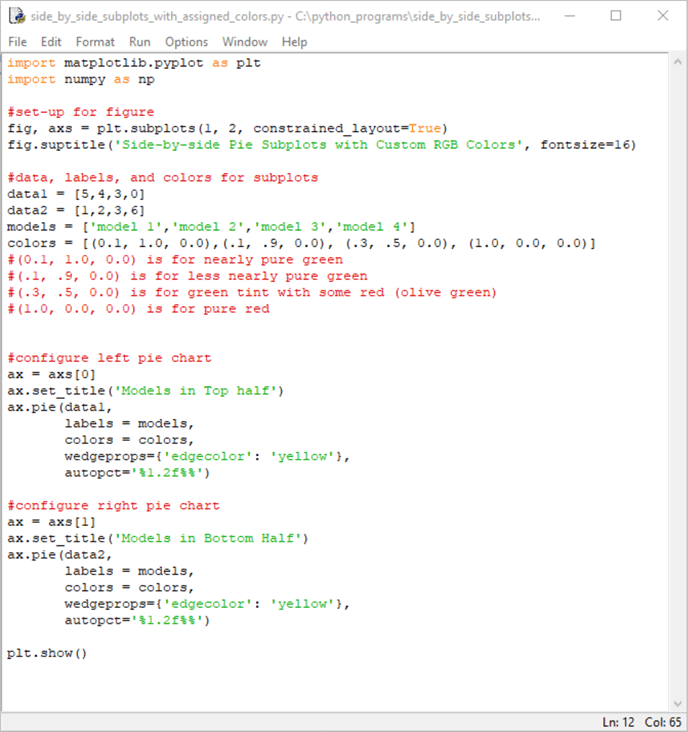