Displaying Subplots for SQL Server Data with Python and Plotly

I am a SQL professional assigned to support a team of data science engineers working on financial technology issues. I previously learned the basics of Python to implement data integration projects with remote data sources for my fellow data science team members. Now, I am receiving requests to create, configure, and display figures for multiple sets of charts in a single figure. My immediate needs are to portray security price time series data in line and candlestick charts. What is some sample Python code to illustrate core concepts for responding to these requests?

Python can work with several charting libraries. Two especially prominent charting libraries for Python are Matplotlib and Plotly. Both Matplotlib and Plotly offer subplots to display multiple charts for different datasets in a single figure. As of the time of writing this article, Plotly is the only one of these two libraries that shows time series data in candlestick charts. SQL professionals who seek an introduction to candlestick charts may do so here: Candlestick and Heikin Ashi Charts from Yahoo Finance and Stooq.com.

This tip gives you introductory-level coverage of how to create subplots for displaying line charts and candlestick charts in Python for data from SQL Server. You will learn how to generate subplot configurations in Plotly and populate them with traces for displaying different sets of data. A subplot is a placeholder for a chart in a set of charts within a single figure. A trace is a Plotly structure for displaying data in a chart format, such as a line or candlestick chart.

All samples are presented with accompanying charts created by the code.

A line chart is a simple type of chart. Therefore, presenting a collection of two or more charts where the individual charts are line charts is an easy way to create multiple subplots within a single figure. A scatter chart from the Plotly graph_objects library with a mode setting of "lines+markers" is portrayed as a line chart. The graph_object library is one of three approaches for charting data with Plotly (an overview of the three approaches is available on this web page.

The following screenshot shows a Python script in IDLE, the integrated development environment for Python that automatically downloads when you install Python from Python.org. 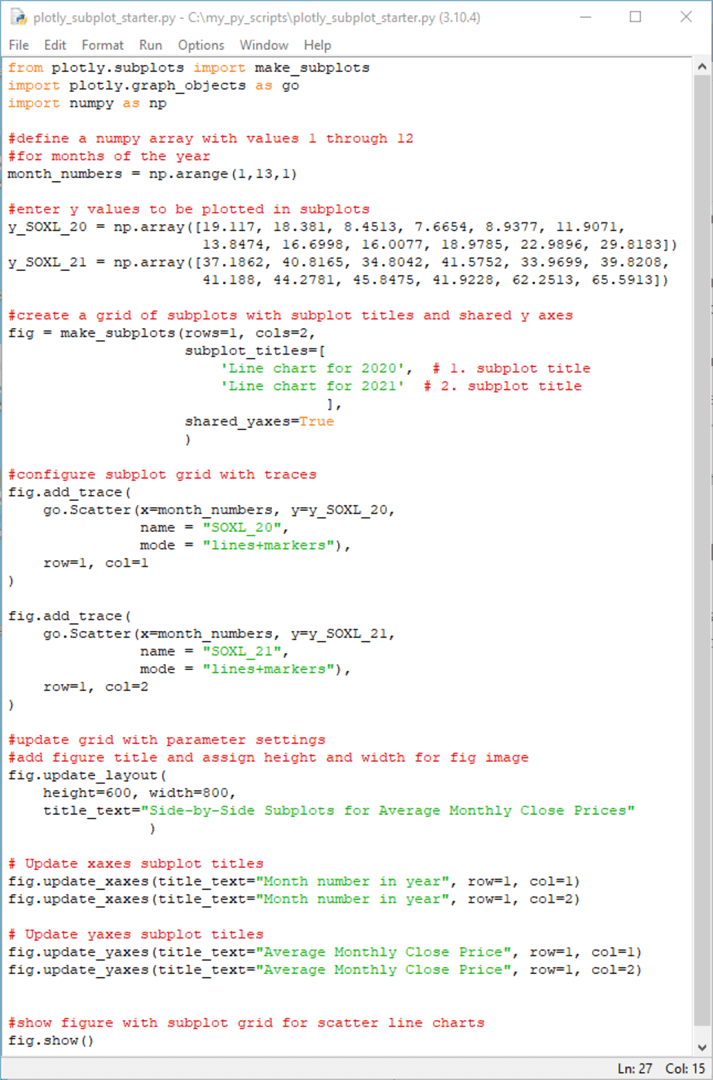 Here is the figure created by the preceding script. Plotly displays the figure in a browser window when you run the code from within the Python script window. While it's possible to program Plotly with Python, its underlying code is in JavaScript. This may be one reason why a fig object returned by the make_subplots function appears within a browser. Additionally, with the Google Chrome browser that I use, the display sometimes fails to open until I right-click a browser tab and choose Reload. 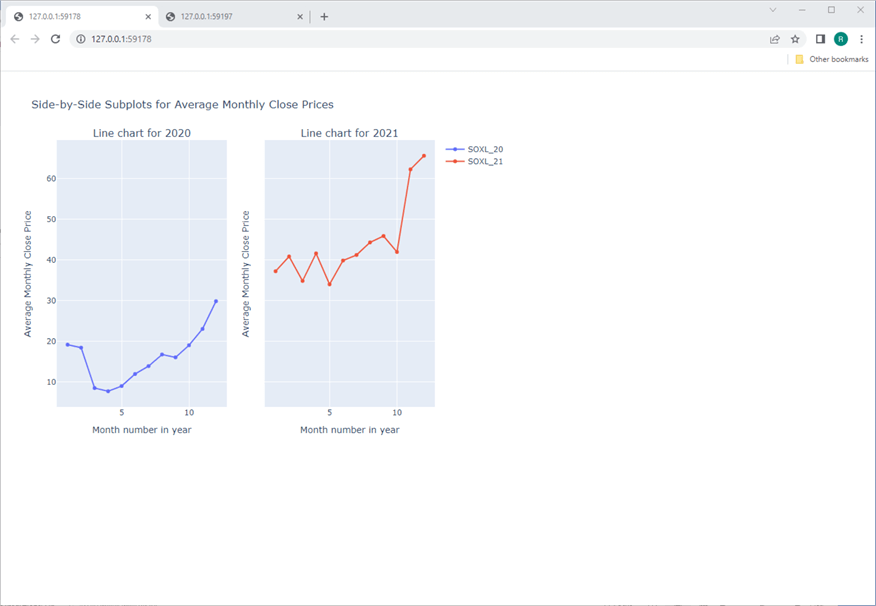 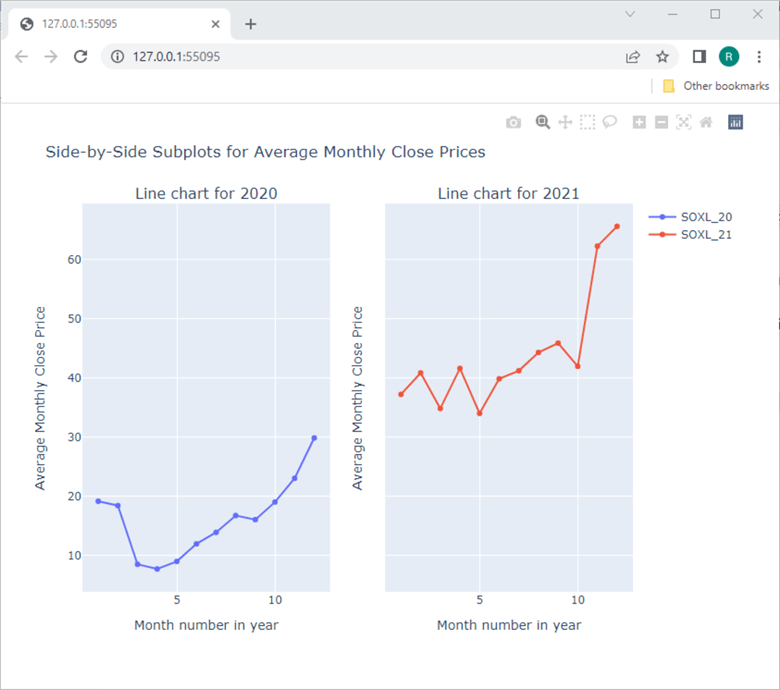 The point of these three display versions is to illustrate how straightforward it is to manipulate your output from Plotly. Those more artistically inclined than me (an easy capability to have) will no doubt discover better ways of displaying line charts than the three examples presented in this section. 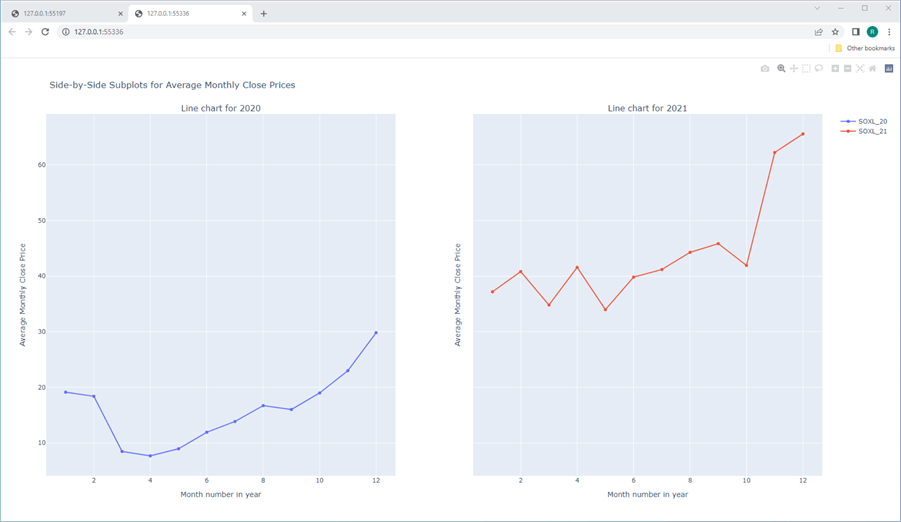 The following table with two rows shows a screenshot from SSMS in each row. The top table row shows the source code for a SQL script that runs a stored procedure named for_retrieved_and_HA_candlesticks; the code for the stored procedure is in the earlier tip in this section is based. The stored procedure returns two results sets – one for observed values and the other for the Heikin Ashi values. In the following script, the observed values are for the open-high-low-close prices for the PSA stock ticker, and that results set is the only one referenced in this section. This ticker symbol is for a public storage company. The script starts with a declare statement for three local variables (@symbol, @start_date, and @end_date). Next, three set statements assign values to the three local variables. The script ends with an exec statement to run the stored procedure.

The full results set can easily be copied to a CSV file by clicking the top left cell in the Results tab to select all rows, then by right-clicking the same cell and choosing Save Results As. Before clicking Save in the Save Grid Results dialog, verify the file type is CSV and enter your preferred name for the file. Within this tip, the CSV file conversion process writes the columns from the SQL Server results set as string values in the columns of the CSV file. Also, the conversion process reformats the date values from YYYY-MM-DD to MM/DD/YYYY. The CSV file is saved with the name PSA_with_observed_prices_for_plotly.csv. The file is saved in the csv_data_for_candlestick folder of the DataScienceSamples folder. 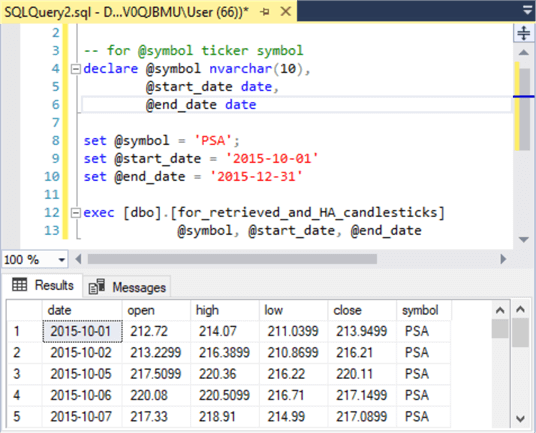 The next screenshot is a Python script for reading the PSA_with_observed_prices_for_plotly.csv file and transforming its values to create a candlestick chart with Plotly and Python. There are three sections to the script. 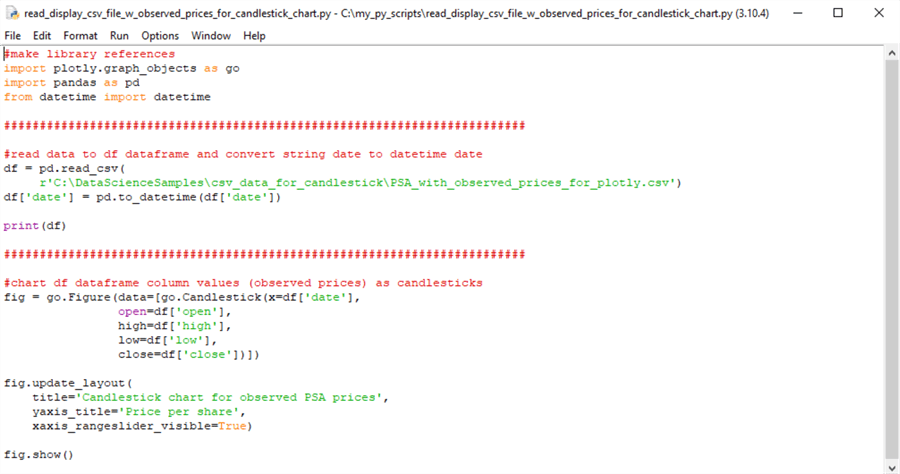 The next screenshot shows the output from the preceding script. The output appears in the IDLE shell window. By default, Python displays the first and last five rows from a print statement for a dataframe. Therefore, you can validate the data migration from SQL Server to Python by comparing these results from Python with the first and last five rows from the SQL Server results set that contains the source data for the PSA_with_observed_prices_for_plotly.csv file. 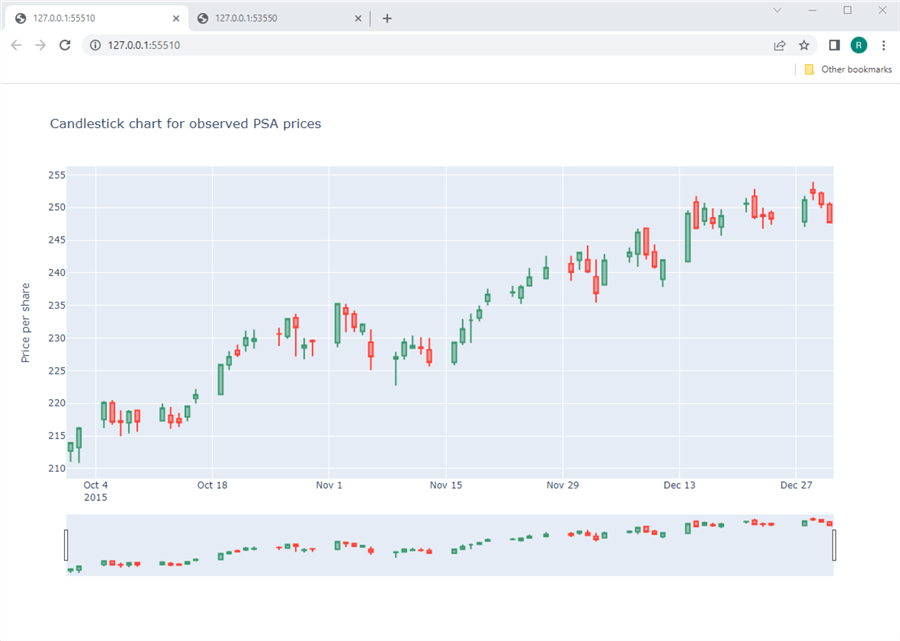 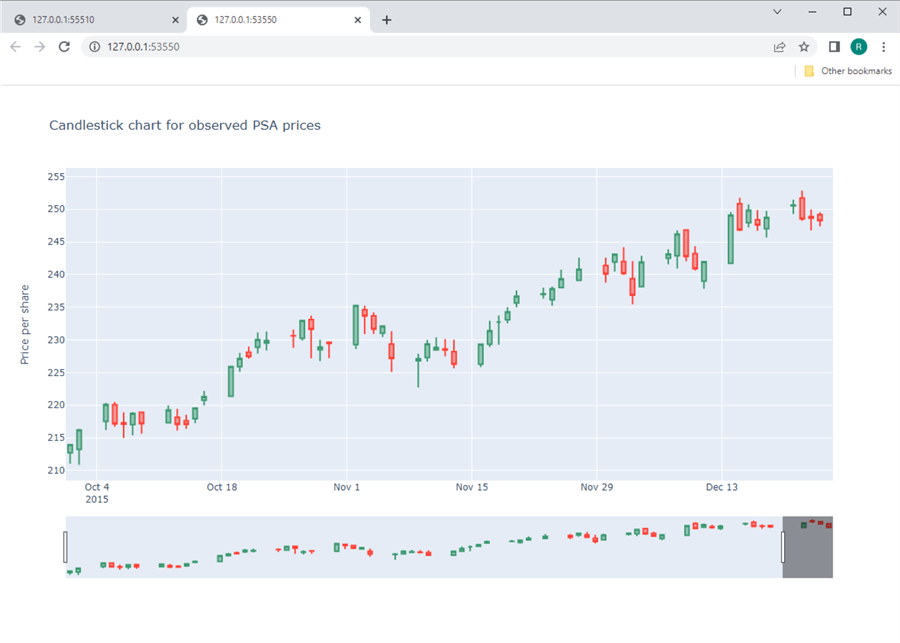 The second element is how to create and display a candlestick chart based on one CSV file with open-high-low-close prices for a single ticker symbol (PSA). This section demonstrates how to read and process four CSV files with open-high-low-close prices for four ticker symbols (PSA, NEE, UNP, and SPY). This section also shows how to suppress the visibility of the x-axis rangeslider tool while still maintaining a level of interactivity for Plotly charts as if the tool was visible.

The following two screenshots show the first and second segments, which appear in the first screenshot. The third segment and closing line of code appear within the second screenshot. 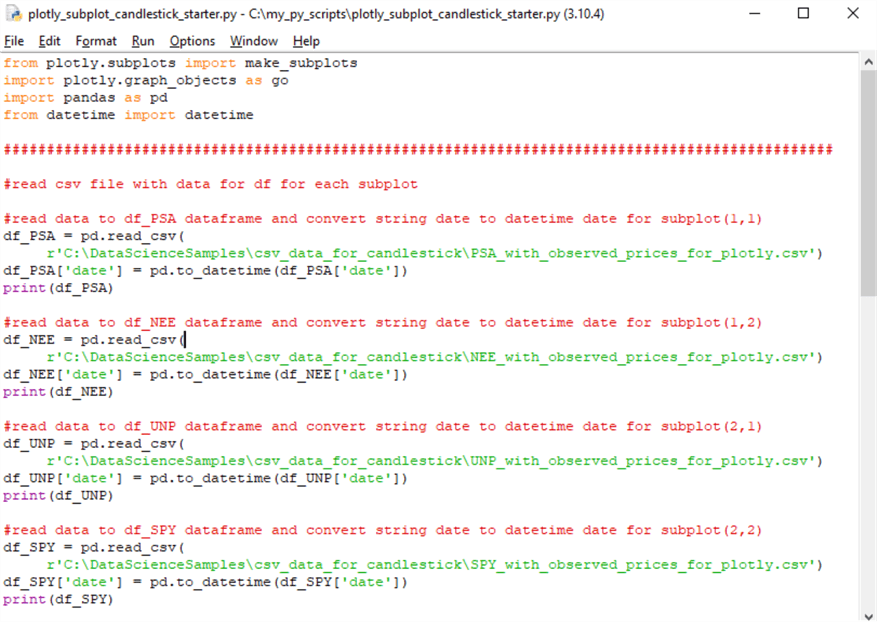 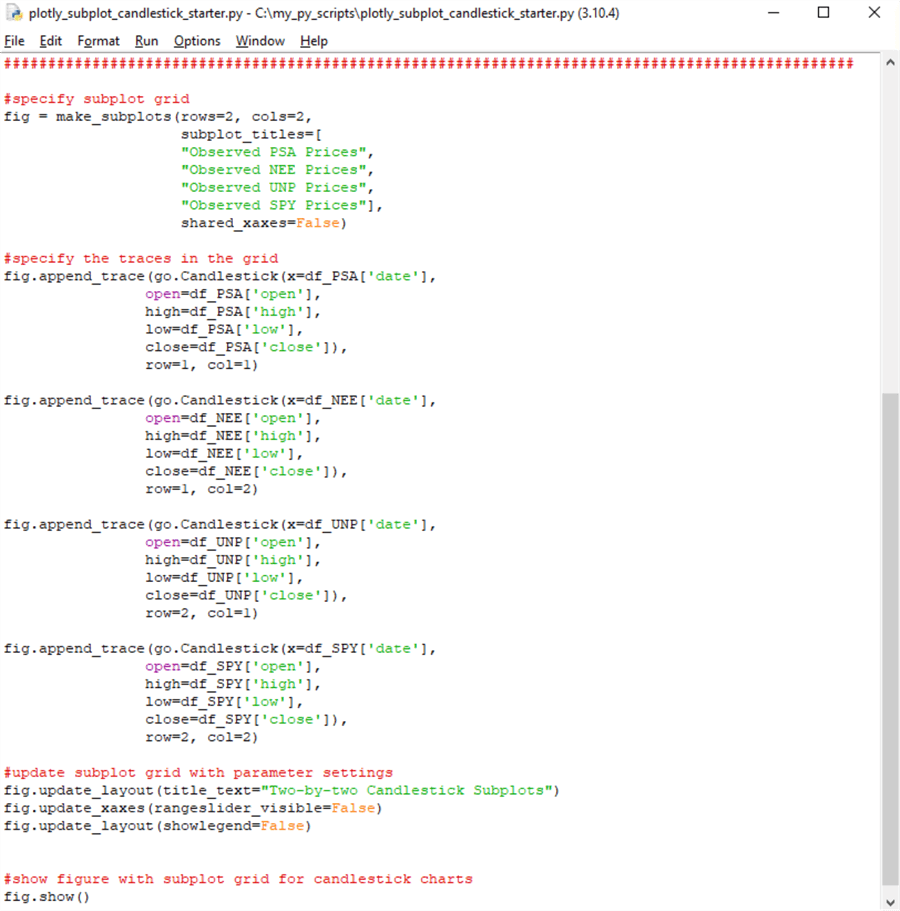 The code in the script for this section's second segment is a relatively simple extension of the second segment's code from the preceding section. As mentioned above, this code transfers the contents of a CSV file to a Pandas dataframe object. There are four separate transfers – one for each of four tickers (PSA, NEE, UNP, and SPY). Each CSV filename and corresponding dataframe name includes a ticker symbol. For example, the four dataframe names are df_PSA, df_NEE, df_UNP, and df_SPY. The matching filename to the df_SPY dataframe is SPY_with_observed_prices_for_plotly.csv.

The date column from a CSV file is converted from a string data type to a Python datetime data type via the to_datetime function from the Pandas library in an assignment statement. After the conversion, a print function copies the first and last five rows of the dataframe to the IDLE shell window. This facilitates a unit test validation of the transferred data from SQL Server to Python.

Here is a screenshot of the figure displayed in the preceding script. The figure has four candlestick charts – one for each of the four tickers. The title for each subplot specifies the ticker symbol whose prices are depicted in it. The visibility of the x-axis rangeslider tool is set to False. This removes the possibility of the x-axis rangeslider obscuring a portion of the candlestick chart below it.

The y-axis ticker range is set by default based on the candlestick values for a chart. Plotly also enables Python developers to programmatically set y-axis limits instead of relying on default assignments.

The x-axis ticker range is also set by default based on the date values passed to the x parameter of the candlestick graph_objects function and Plotly's built-in calendar. Again, there are a few ways to modify the x-axis values to show. 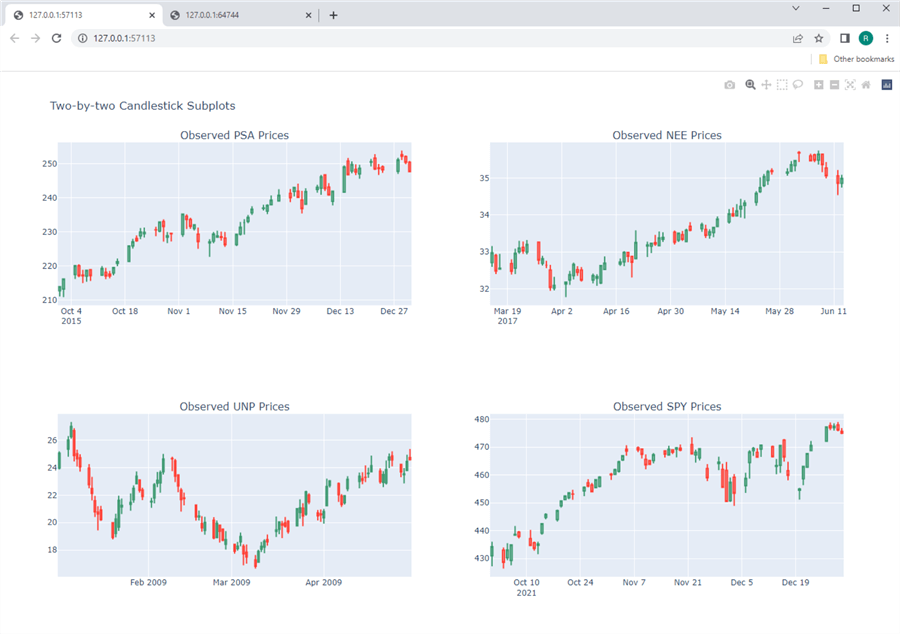 The next couple of screenshots shows one of these ways in the process. The left border of the PSA candlestick chart below is dragged towards the right frame of the chart so that all candles except the last four are excluded from the dragged area. When you drag an x-axis border edge, handlebars appear on the chart at the beginning and ending x-axis positions. The candles that are unshaded are those that are in the dragged area. The four candles that appear with a dark gray tint over them will be excluded from the redrawn candlestick chart. When you release the drag, the chart is redrawn to display just those candles in the dragged area. 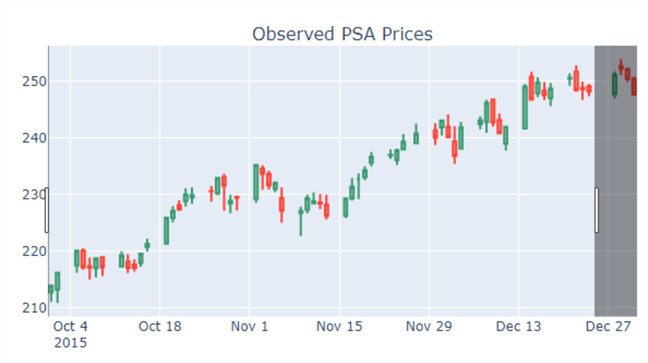 Below is the re-drawn figure with four subplots. Notice that the chart for the PSA ticker in the top left subplot does not show the four shaded candles in the preceding figure. Furthermore, the last four candles for the re-drawn PSA candlestick chart include a green candle followed by three red candles. These are the same candles at the right edge of the dragged area in the preceding screenshot. The re-drawn candlestick chart below confirms the ability to interactively change charts with Plotly, even without an x-axis rangeslider. 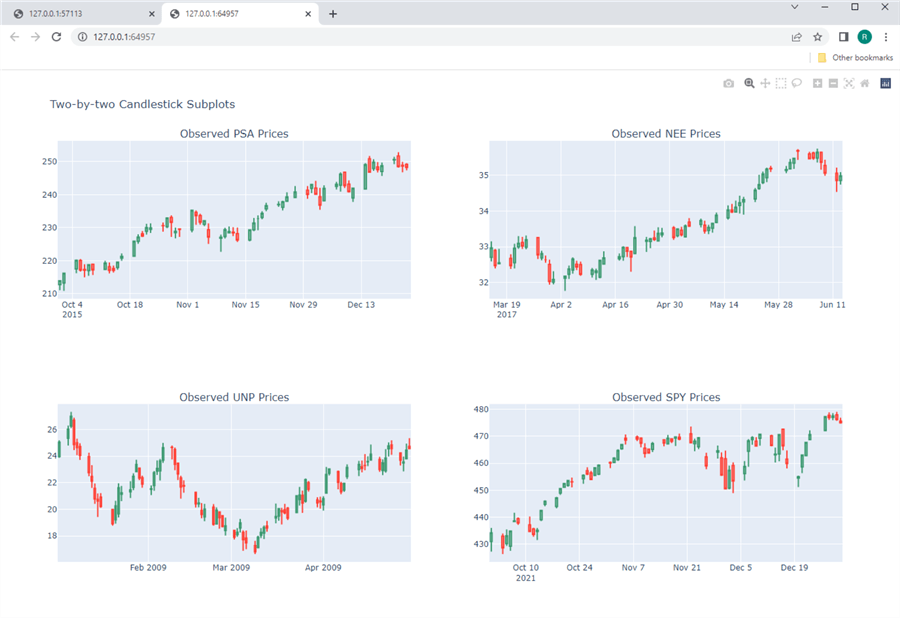 This tip aimed to introduce multi-chart displays with Python and Plotly for a financial technology application. Because this tip targets SQL professionals, it began with a SQL script for extracting data from a SQL Server table that is appropriate for insertion in multi-chart displays. The results sets from the SQL Server scripts were copied to CSV files for reading by Python scripts. You can, of course, transfer the SQL Server scripts to Python with code.

A future tip may illustrate and discuss a programmatic solution to the transfer of results sets from SQL Server to Python: