Compute and Display Candlestick Charts in SQL Server and Python

Heikin Ashi charts are a special kind of candlestick chart. A traditional candlestick chart graphs open, high, low, and close prices observed over a set of periods, such as hours, days, or weeks. The prices for each time period are represented by a single candlestick. The collection of candlesticks over multiple periods denotes a time series of prices for a security. Instead of plotting observed open, high, low, close prices, as in traditional candlestick charts, Heikin Ashi charts present average candlesticks based on the current and prior periods. This averaging process filters out day-to-day random changes and makes it much easier to discern short-term price trends.

The candlestick chart was originally created for the use case of tracking rice market prices in Japan during the 1700's. Since the early 1990's, candlestick charts are used for other types of markets, such as stocks, bonds, treasury bills, commodities, fiat currencies, and crypto currencies. This prior MSSQLTips.com article introduces database professionals to candlestick and Heikin Ashi charts. The charts in the prior tip were based on data stored and charted at either the Yahoo Finance site or the Stooq.com site. Another prior tip Compute and Display Heikin Ashi Charts in SQL Server and Excel illustrates how to graph financial time series data from data stored in SQL Server with Excel.

This tip extends prior coverage of candlestick charts by taking advantage of financial time series data stored in SQL Server and charted via Python. Two prior tips (here and here) provide examples of how to migrate financial time series data from Yahoo Finance and Stooq.com to SQL Server. The current tip extracts selected time series data for different ticker symbols from SQL Server, computes Heikin Ashi chart values, and displays the observed open, high, low, close candlestick values along with the Heikin Ashi candlesticks. Then, Python and the Plotly external graphing objects library are adapted for creating traditional candlestick and Heikin Ashi charts from the financial data stored in SQL Server. This tip differs from a prior one that graphically compares observed prices to Heikin Ashi values in Excel Compute and Display Heikin Ashi Charts in SQL Server and Excel. Python implements its charting solutions through a programmatic interface while Excel implements its charting solution through a manual interface.

Processing data for this tip

The following table shows the symbol for each of the ten tickers examined in this tip. The second and third columns show the start date and end date for each ticker's timespan. The ten timespans occur over a fourteen-year interval from as early as 2009 through as recent as 2022. This facilitates the comparison of observed prices versus Heikin Ashi values over a wide range of different time series.

Here is a script to create the for_retrieved_and_HA_candlesticks stored proc in the DataScience database.

Here is a short script excerpt for invoking the for_retrieved_and_HA_candlesticks stored proc for the NVDA ticker symbol.

In the T-SQL script available in the download file for this tip, there are nine additional versions of the code from the declare statement through the exec statement for the remaining nine ticker symbols tracked in this tip. 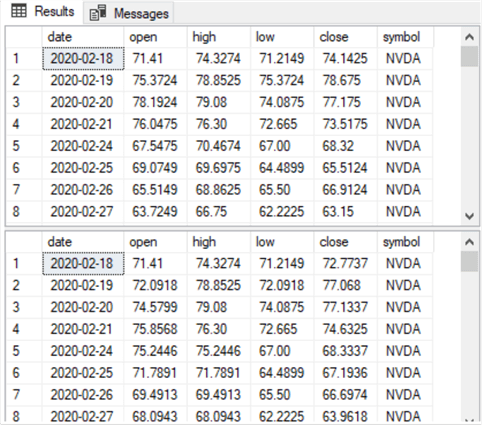 This tip uses two nearly identical Python scripts for plotting candlestick charts – one with observed prices data and another with Heikin Ashi values based on observed prices.

Here is the script for plotting candlesticks for observed prices for the NVDA ticker symbol. The filename for the Python script is read_display_chart_csv_file_w_observed_prices.py. The script has three parts. 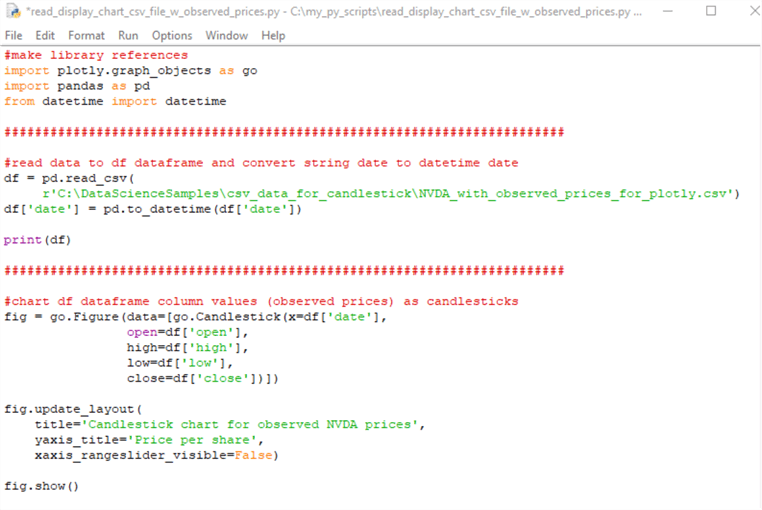 Here is the script for plotting candlesticks for Heikin Ashi values based on observed prices for the NVDA ticker symbol. The filename for the Python script is read_display_chart_csv_file_w_HA_values.py. With two exceptions, the code within the following Python script file is identical to the preceding Python script. 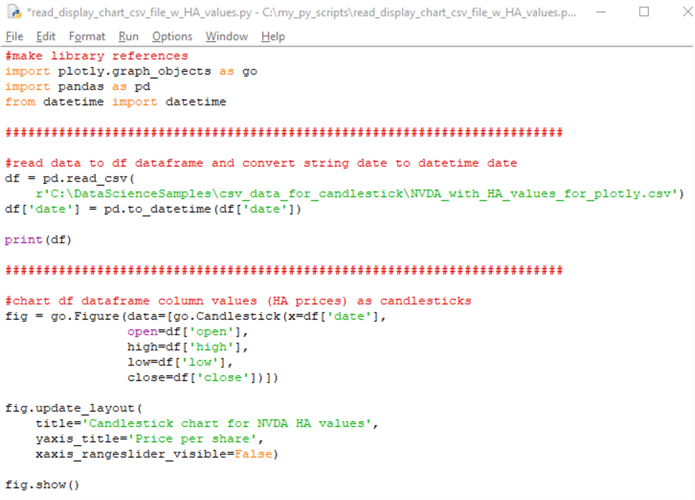 These two Python scripts can easily be re-used for each of the ten ticker symbols used in this tip. Just edit the ticker symbol text in the read_csv method and in the chart title. MSSQLTips.com offers a prior tip for the IDLE environment. This environment can be used to edit and run Python scripts.

The two charts look very similar, but there are also some important differences. 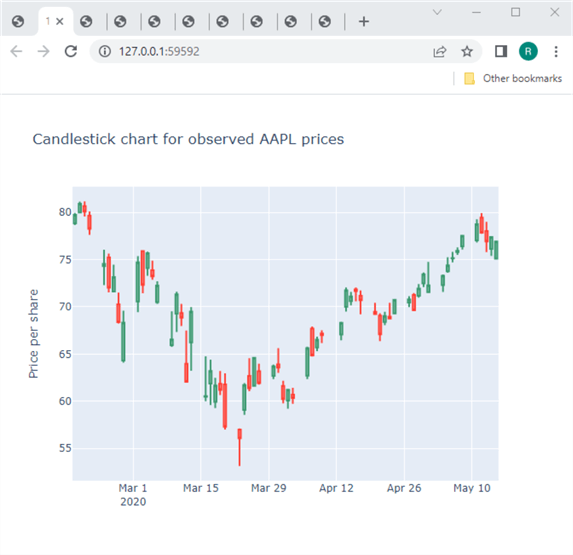 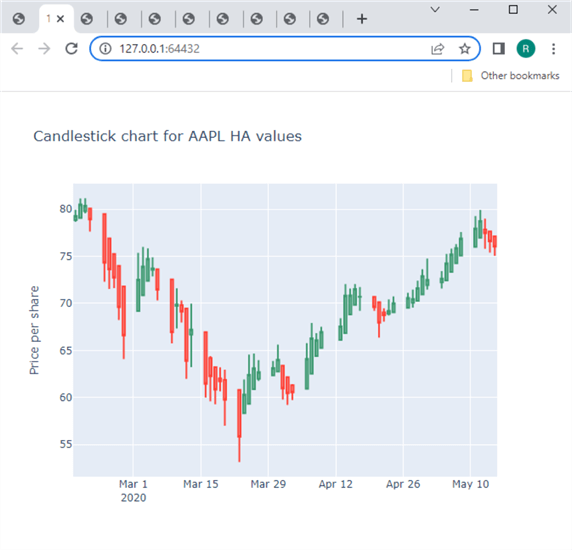 The following table has two candlestick charts for the UNH ticker symbol. The top chart is for observed prices, and bottom chart is for Heikin Ashi values. Each chart contains three rectangles – one for each of three buy-sell cycles.

The following pair of screen shots illustrates this kind of application of Heikin Ashi values for the ADBE ticker. The range of dates starts at the beginning of January 2009 and runs through late May 2009.

The top chart shows the observed prices instead of Heikin Ashi values at key points in the buy-sell cycles.

While the preceding example is for actual data, the example is not meant to imply that prices will always rise as a result of ignoring a sell signal. Additional research is needed to assess when the strategy of ignoring sell signals is likely to yield superior results to selling a position in response to a sell signal.

The download for this tip aims to give you the opportunity for a first-hand feel about how to develop the code and screen shots displayed in this tip.

After duplicating the three pairs of charts displayed in the tip, you can create seven additional pairs of charts based on the csv files supplied in this tip's download file. You can also create fresh results sets with matching csv files for the same tickers with other timespans or for other tickers with historical data supplied in this tip's download file. Then, you can graph the newly created csv files as candlestick charts for observed prices and Heikin Ashi values. In performing these kinds of additional steps, you will grow your abilities for processing and analyzing time series data with SQL Server and Python.