A Framework for Comparing Time Series Data from Yahoo Finance and Stooq.com

Please demonstrate how to compare with T-SQL time series datasets from two different data providers. The data from a data supplier should provide multiple time series observations (e.g., open and close prices) for multiple ticker symbols (e.g., SPY and QQQ). Describe an approach for detecting and handling bad data. After data are loaded into SQL Server from each data supplier, illustrate how to apply the coefficient of determination for assessing how well the time series from different suppliers correspond to each other.

MSSQLTips.com recently introduced the basics of how to load time series data into SQL Server from both Yahoo Finance and Stooq.com. The tip showed how to configure csv files with one file per ticker symbol from each source. Each file contained open, high, low, and close prices as well as trading volume on each trading date over a timeframe, such as from the first recorded trading date by a data supplier through the current trading date. When working with securities data, it can be useful to be familiar with multiple data sources. This is because your data needs may extend beyond the longevity of any specific data supplier as well as because different data sources can complement each other.

This tip shows how to load into SQL Server historical time series data for 62 different tickers. The tickers are selected so that they include at least a couple of tickers each for the twelve major security ticker sectors. In addition to the tickers selected for each major sector, other tickers are chosen so you can investigate the price behavior of

This tip shows how to invoke a stored procedure for computing the coefficient of determination that was described in detail within a prior tip. The coefficient of determination can assess the degree to which two different datasets change their values relative to each other. A simple T-SQL script within this tip illustrates how to invoke the stored procedure to assess the similarity between Yahoo Finance and Stooq.com for several different time series datasets.

Ticker Symbols for this tip

The following two screen shots provide an overview of the 62 ticker symbols for which time series data are available from this tip. The screens are, respectively, for the first and second halves of an Excel worksheet. The worksheet displays a csv file that contains ticker symbols with matching security names, sectors, industries, and home countries. Each row applies to both data sources unless indicated otherwise. 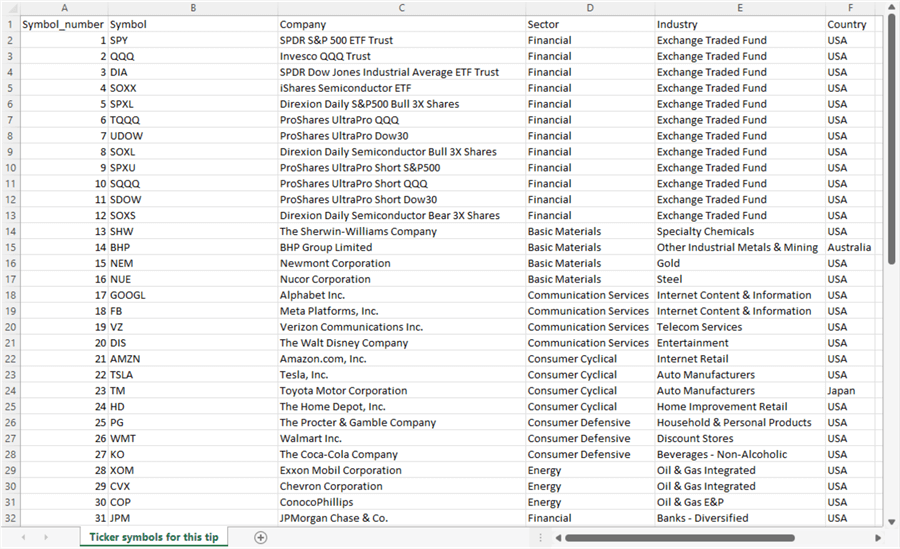 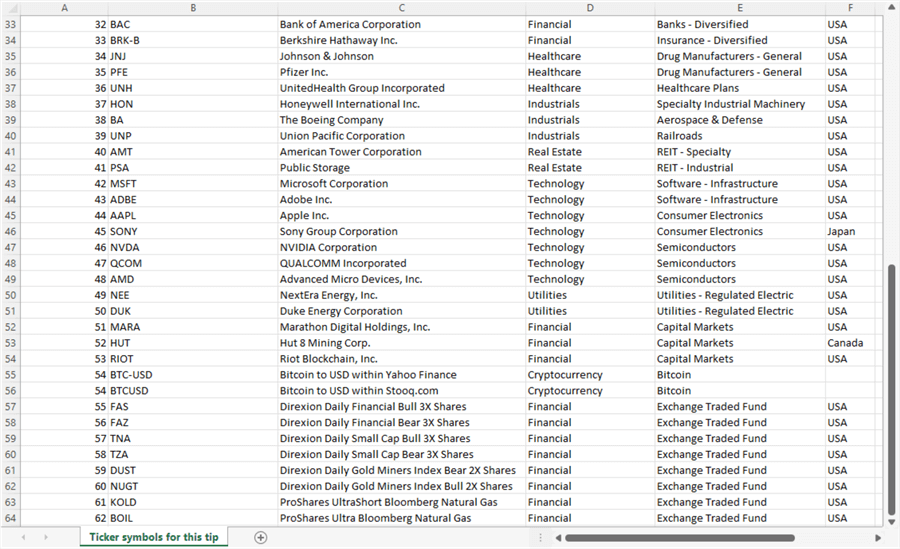 This tip’s solution section references a prior tip with instructions for configuring csv files from both Yahoo Finance and Stooq.com with time series data for ticker symbols. After the csv files are configured and saved, you can attempt to import the data into SQL Server. Presuming there are no rows with missing column values in the csv files, you can easily import the file contents with the bulk insert statement into a SQL Server table.

If this tip’s import code encounters a ticker symbol with rows that have one or more columns with a missing value, the process for transferring time series data into SQL Server fails and halts. The approach used in this tip is to let the error happen, and then manually fix up the source data file. SQL Server error messages for ticker symbols having rows with one or more missing column values can help you navigate to a row for whatever fix up actions you prefer. In this tip, the action is to remove the row with a missing column value.

The following screen shot shows an excerpt from the stooq.com historical data download user interface for the GOOGL ticker symbol. The row of data for 23 Jul 2010 has a value of 0 in its volume column. There are no other trading dates with a volume column value of 0 for GOOGL. The value of 0 signifies that Stooq.com does not have any volume of shares traded for the GOOGL ticker symbol on July 23, 2010. In contrast, the time series data for GOOGL on 23 Jul 2010 does have open, high, low, and close prices. This outcome denotes a data error because you cannot have prices for shares traded on a date without at least one share being exchanged between a buyer and a seller. In fact, Yahoo Finance reports about 4.5 million shares being traded on July 23, 2010.

The following screen shot is of the csv file exported by the Stooq.com site. The csv file is displayed via an Excel worksheet. Notice the volume column value is blank for July 23, 2010. The blank value in the csv file is the same as null. Because the bulk insert statement for inserting the csv file into a SQL Server table does not take advantage of SQL Server built-in capability for keeping null values, the code fails with an error message that specifies the line number in the csv file causing the failure.

The information in the error message was used to manually locate the row in the csv file. Then, the row with a null value was deleted from the file. This action and corresponding actions for other ticker symbols are recoded in a txt file for the csv files from Stooq.com and Yahoo Finance. The csv files from each data supplier are stored in a separate path.

After the paths are populated with edited csv files as described above, the processing then transfers the csv files to a SQL Server table – one table for the path with Stooq.com csv files and a second table for the path with Yahoo Finance csv files. The T-SQL script for implementing the transfer for Stooq.com csv files is reviewed in the next section. The download for this tip contains T-SQL scripts for both sets of csv files. In addition, the two T-SQL scripts are slightly different because of data and formatting issues. A few comments in the second subsection of the next section highlights selected code differences for the Yahoo Finance script versus the Stooq.com script.

As indicated above, the main focus of this section is to review the code for transferring a folder of csv files from Stooq.com to a SQL Server table. This topic occupies the first and major subsection in this section. The second subsection highlights the differences for the T-SQL script that performs the corresponding roles for the csv files from Yahoo Finance.

Transferring csv files from Stooq.com to a SQL Server table

There are three sections to the T-SQL script.

The next script excerpt shows the T-SQL code for setting up the operation of the while loop through the ticker symbols and the code for populating the stooq_ohlcv_values_with_symbol for the first three ticker symbols.

The final excerpt from the populate_stooq_ohlcv_values_with_symbol_for_feb_2022.sql script file appears next.

The T-SQL code (populate_yahoo_finance_ohlcv_values_with_symbol_for_feb_2022.sql) for transferring csv files to a SQL Server table (yahoo_finance_ohlcv_values_with_symbol) is nearly identical to that for Stooq.com. This tip’s download contains the full listing for the Yahoo Finance T-SQL script file. Here are some key differences between the script files for Yahoo Finance and Stooq.com.

Do prices from Stooq.com and Yahoo Finance vary in the same way?

Up until this point in the tip, we have migrated time series values for prices and volumes for ticker symbols from two different online sources (Stooq.com and Yahoo Finance) to two different SQL Server tables (stooq_ohlcv_values_with_symbol and yahoo_finance_ohlcv_values_with_symbol). For the same ticker symbol, you should expect the price values and volume values from one source to vary in the same way as the prices and volumes from the other source. For example, if you plot Stooq.com close prices by date versus Yahoo Finance close prices by date for a ticker symbol, the scattergram points should fall very close to a line through the points.

The first step in the demonstration is to create a fresh version of the stored procedure for computing the coefficient of determination in the same database as the two tables with time series data from Yahoo Finance and Stooq.com. The following script shows the code for creating a stored procedure for computing the coefficient determination in the DataScience database. You can change the use statement to reference any other database that you are using as a default database.

A review of the preceding script indicates that the stored procedure references two columns of data named x and y from a global temp table named ##temp_xy. In this tip, the x variable points to the close prices from the SQL Server table with close prices from Yahoo Finance, and the y variable points to the close prices from Stooq.com. The output from the stored procedure consists of a table with a single row of values. The last column value in the row is the coefficient of determination, and the prior columns are for supporting values used to compute the coefficient of determination.

In the context of the current tip, you can invoke the stored procedure in three steps that appear below. The following script implements all three steps. A row of dashed lines divides the steps from one another.

The preceding script was edited to compute and display coefficients of determination for the SPY, QQQ, and DIA ticker symbols. This extended script is available in this tip’s download as coefficients_of_determination_between_yf_and_stooq.sql. The three results set for each ticker from the edited script appears below. The three ticker symbols are collectively based on many widely traded tickers. Consequently, they provide an outcome that is representative of all ticker symbols overall. 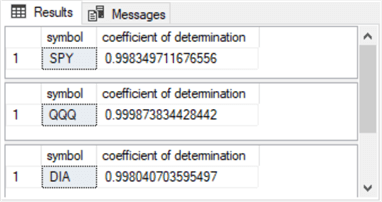 This tip drills down into process and T-SQL programmatic issues for migrating time series price and volume data from Stooq.com and Yahoo Finance to a SQL Server table. Two additional topics are also covered – namely, an introduction on how to pull a representative sample of ticker symbols for the whole US securities market and an introduction for a statistical approach to assess the similarity of two different datasets with time series for the same ticker symbol.

The download for this tip includes T-SQL script files and folders of edited csv files with price and volume time series data from Yahoo Finance and Stooq.com. With this download content,