The candlestick chart was originally created for the use case of tracking rice market prices in Japan during the 1700's. Since the early 1990's, open, high, low, close candlestick charts and Heikin Ashi charts are used for other types of markets, such as stocks, bonds, treasury bills, commodities, fiat currencies, and crypto currencies. This prior MSSQLTips.com article introduces database professionals to candlestick and Heikin Ashi charts. The charts in the prior tip were based on data stored and charted at either the Yahoo Finance site or the Stooq.com site.

This tip extends the coverage of candlestick charts by taking advantage of financial time series data stored in SQL Server. Two prior tips (here and here) provide examples of how to migrate financial time series data from Yahoo Finance and Stooq.com to SQL Server. The current tip extracts selected time series data for different ticker symbols from SQL Server, optionally computes Heikin Ashi chart values, and displays the observed open, high, low, and close candlestick values along with the Heikin Ashi candlesticks (when they are computed). The displayed data are copied from SQL Server to Excel. Then, built-in Excel chart features are adapted for creating traditional candlestick as well as Heikin Ashi charts in Excel. The Excel built-in features are all based on user interfaces (no programming is required for displaying charts).

An example of a candlestick chart for data from SQL Server

The following screen shot shows a short T-SQL script for displaying open, high, low, close prices for two ticker symbols (AMZN, JPM); AMZN is for Amazon.com, Inc., and JPM is for JPMorgan Chase & Co. The prices for the two tickers are collected for time series starting in 2018-11-30 and running through 2019-02-11. The Results tab in the screen shot shows the first ten rows from the results set. 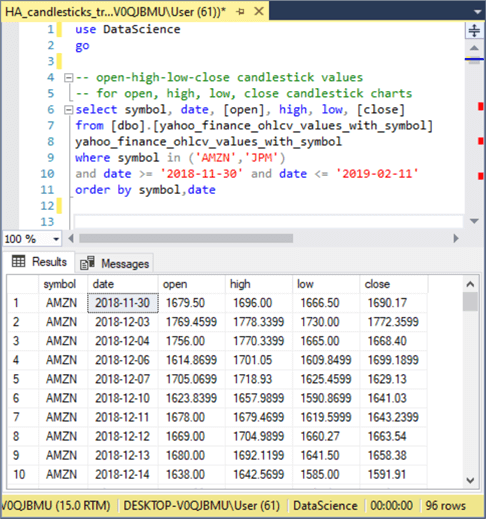 The next table presents the full results set for the AMZN ticker with its date, open, high, low, and close column values selected (these values are shaded). After copying the selected set of rows into the Windows clipboard from SQL Server, you can paste the rows into a blank tab of an Excel workbook file. 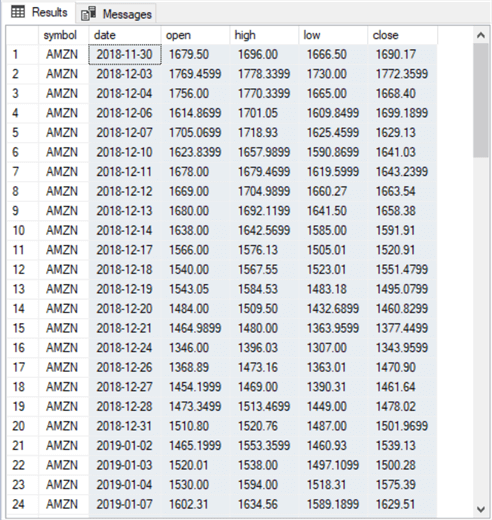 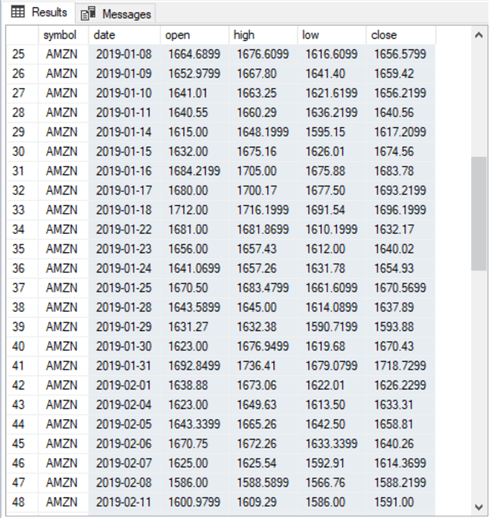 The following screen shot shows an Excel tab with a candlestick chart to the right of the copied data. 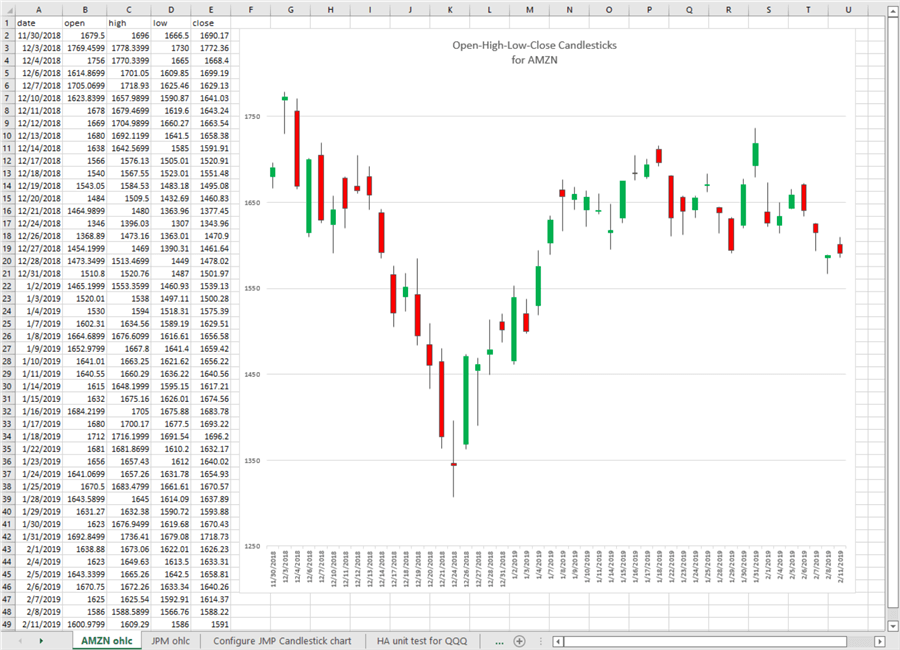 Configuring a candlestick chart in Excel

The following screen shot shows an excerpt from a tab in an Excel workbook file after it is populated with data for the JPM ticker. 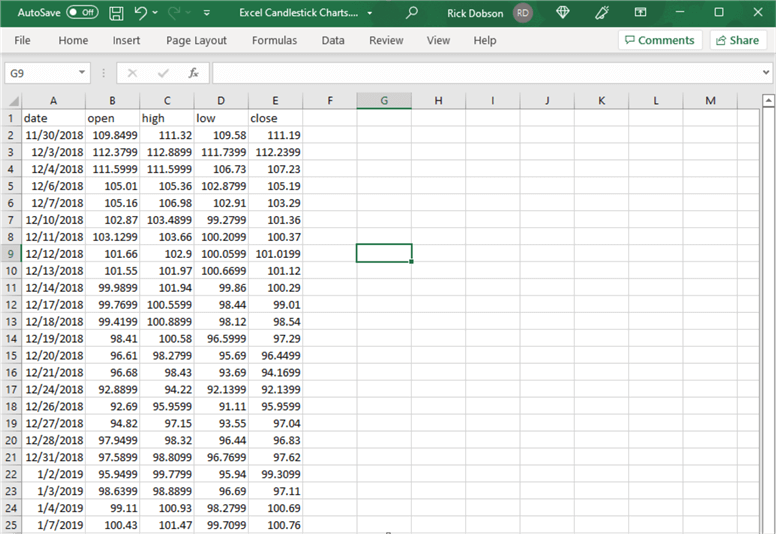 The next step is to unprotect the tab. Click the triangle above the value of 1 denoting the first row and choose Format Cells > Protection. Make sure the Locked and Hidden check boxes are both cleared (see below). Then, click OK to commit the change(s). The configuration is necessary in order to make the OK button ungrayed out when you try to add a candlestick chart to a tab. 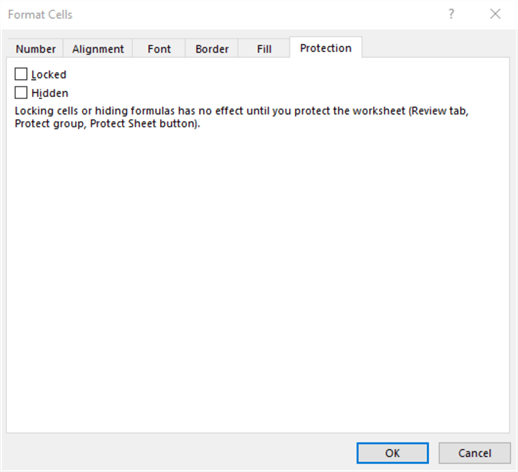 Next, perform the selections to add the candlestick chart to the Excel tab. 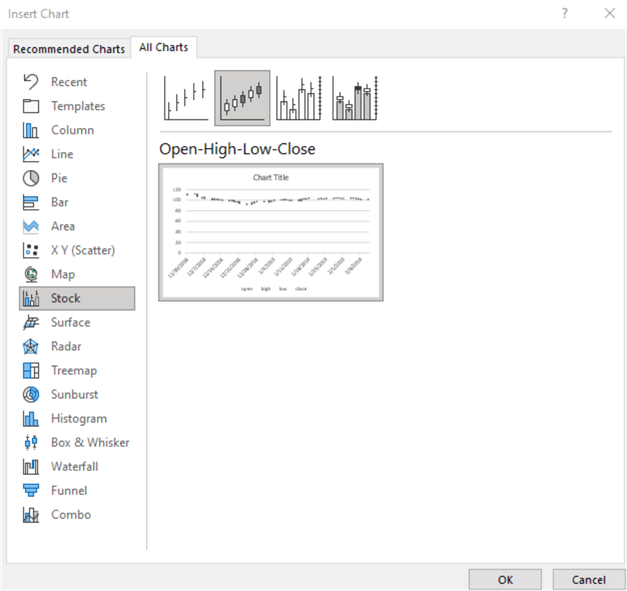 Select the vertical axis for the freshly added candlestick chart and set the bounds to remove excessive white space above and below the candlesticks in the chart. Here's the tab with the chart image after resetting the vertical axis bounds. The legend towards the bottom of the chart containing open, high, low and close is unnecessary. You can remove the unnecessary legend by selecting it, and then pressing Delete on your keyboard. 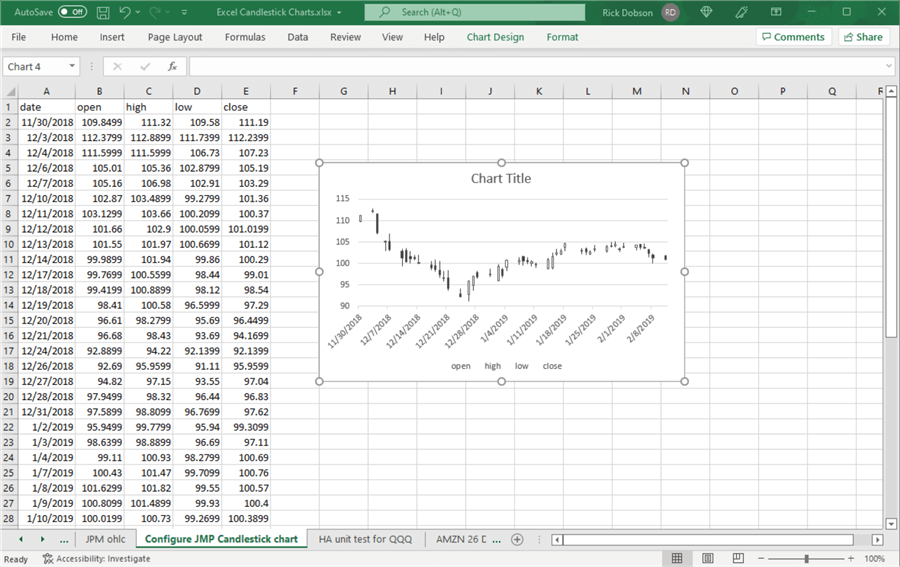 The next step is to reset the horizontal axis to not include weekend days and other days, such as January 1 and Christmas day, when trading markets are closed. You can do this by right clicking the horizontal axis labels and choosing Format Axis. Next, choose the Text axis radio button under Axis Type. While you are in the Format Axis menu, you can click the Size and Properties icon (it looks like a cross). Change the Text Direction drop-down box to Rotate All Text to 270⁰. Then, exit the menu. 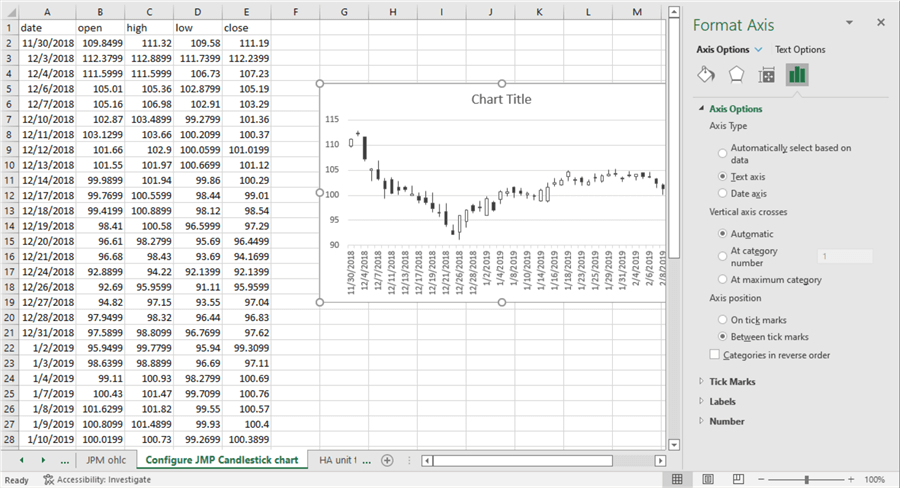 Next, right click any black filled candlestick and choose Format Down Bars 1. You may have to click in multiple spots on the candlestick body to have the menu item (Down Bars 1) appear. Then, from the Fill menus on the right choose a color of Red for the down bars; also choose Solid fill. Perform the same kind of task for the hollow open bars but choose Green as the fill color for the Up bars; also choose Solid fill. After closing the Format Up bars menu, you may notice that the last date or two does not show on the horizontal axis. If this occurs, simply stretch the right chart edge farther to the right until all selected dates appear on the chart. 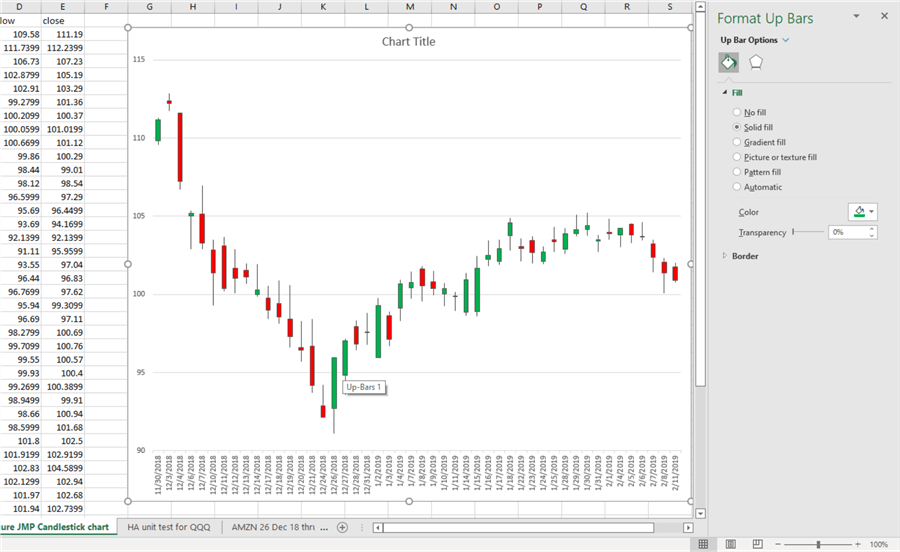 As indicated in the Solution section, Heikin Ashi charts display computed values based on current period and prior period prices. This section reviews the computational expressions and the process for computing Heikin Ashi values with T-SQL. Additionally, a T-SQL example is presented and compared to a previously published introduction to Heikin Ashi charts at StockCharts.com. The comparison serves as a unit test for the code described in the current tip.

The next screen shot shows both the observed open, high, low, close prices as well as the computed HA_open, HA_high, HA_low, and HA_close values for the QQQ ticker for the August trading days during 2011 from the previously referenced StockCharts.com article introducing Heikin Ashi charts. The numbers on the left box within the screen shot are observed values, and the numbers in the right box within the screen shot are computed HA values. Before proceeding further, it may be worth pointing out that I discovered slight discrepancies between the open price observations in the screen shot below and the most recently available open prices from the Yahoo Finance site. These differences are so slight as to be immaterial. This tip uses the most recently available open price observations as of the time this tip is prepared. 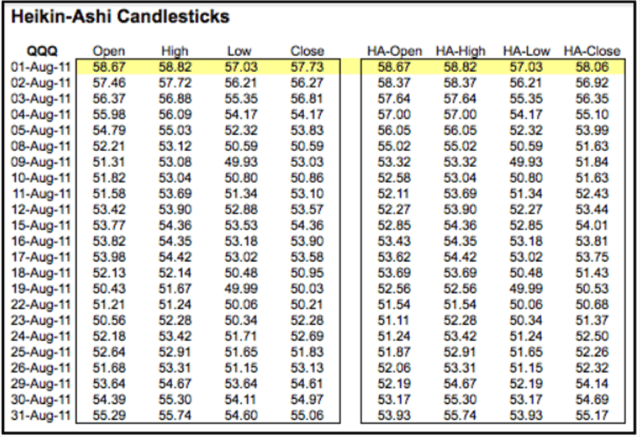 Here is the T-SQL code for the first part.

Here is the T-SQL code for the second part.

Here is the results set displayed by the optional select statement at the end of the first part. 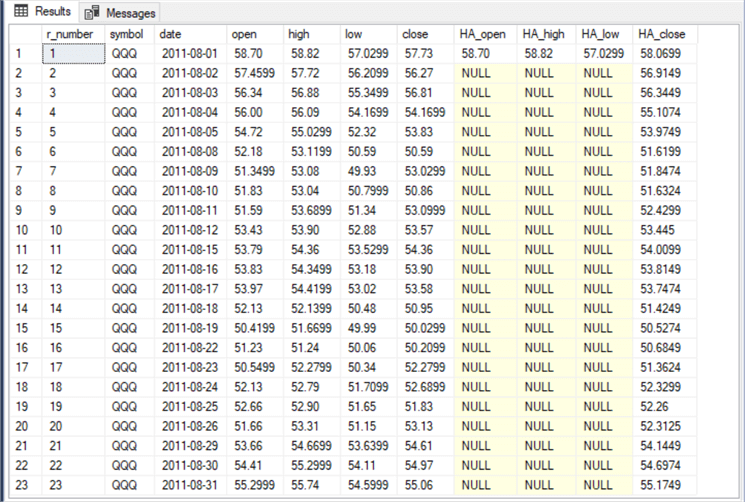 The following screen shot shows the results set from the select statement at the end of the script for the second part. You can use this results set to position two candlestick charts in a single Excel worksheet tab – one chart for the observed open, high, low, close values, and a second chart for the computed HA_open, HA_high, HA_low, and HA_close values.

The next screen shot shows an Excel worksheet with two candlestick charts. 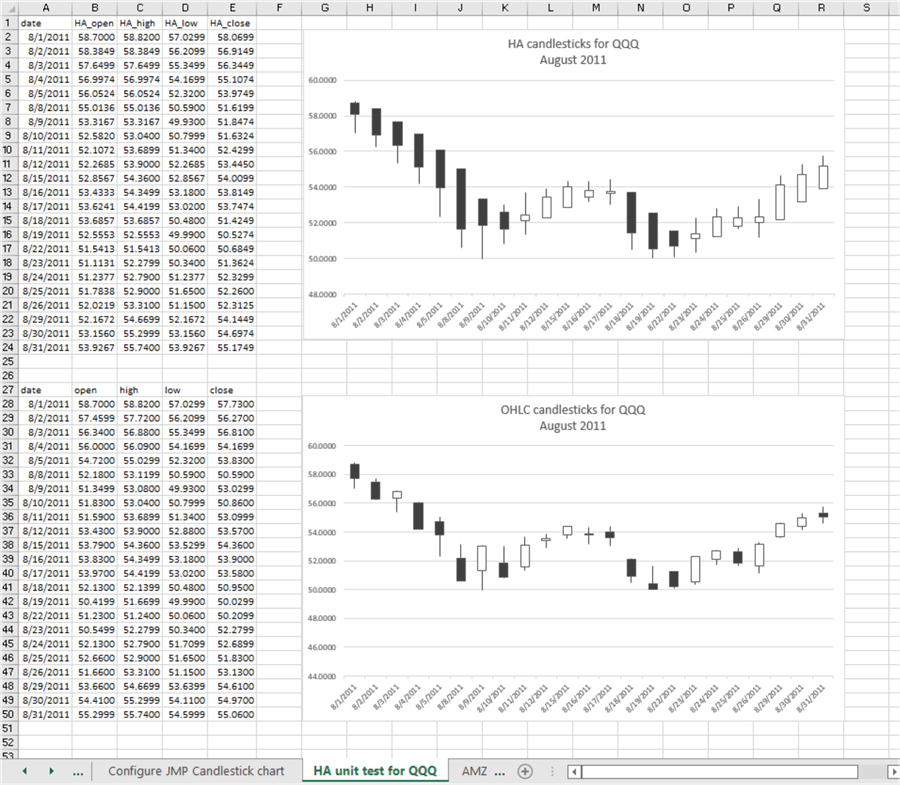 The Japanese phrase Heikin Ashi translates to average pace in English. This average pace feature makes it ideal for discovering adjacent periods with an uptrend. Candlestick charts of observed open, high, low, and close prices do not typically reveal average price momentum from one period to the next nearly as well as Heikin Ashi charts.

The following pair of chart images show HA candlesticks in the top chart over a candlestick chart for open, high, low, close observed prices (OHLC) for the AMZN ticker. 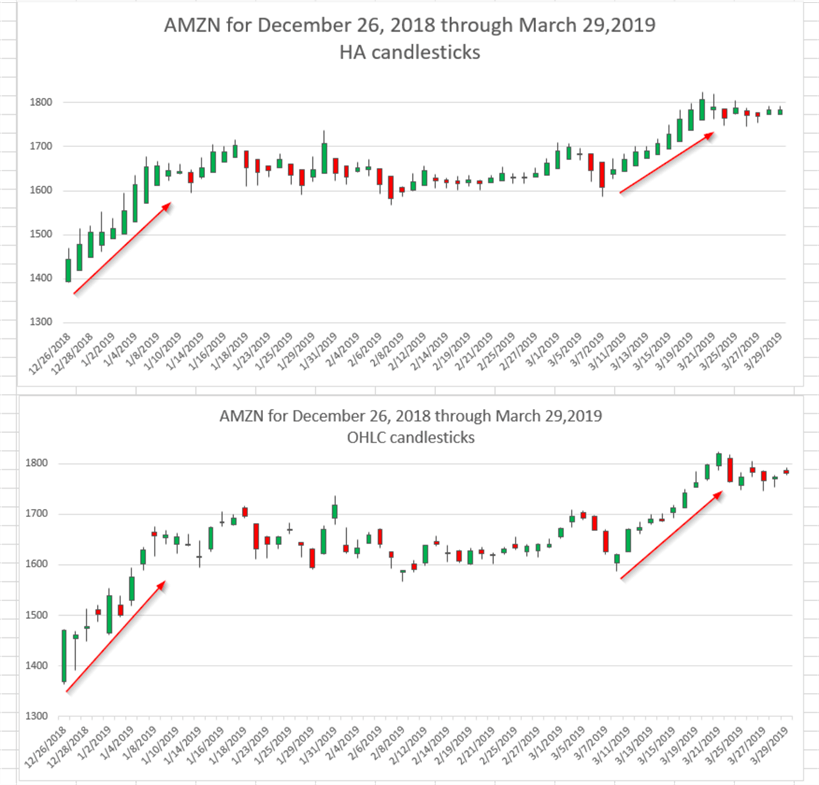 Here is another pair of candlestick charts for Heikin Ashi values over observed open, high, low, close prices for the XOM ticker. This ticker is for the Exxon Mobil Corporation. 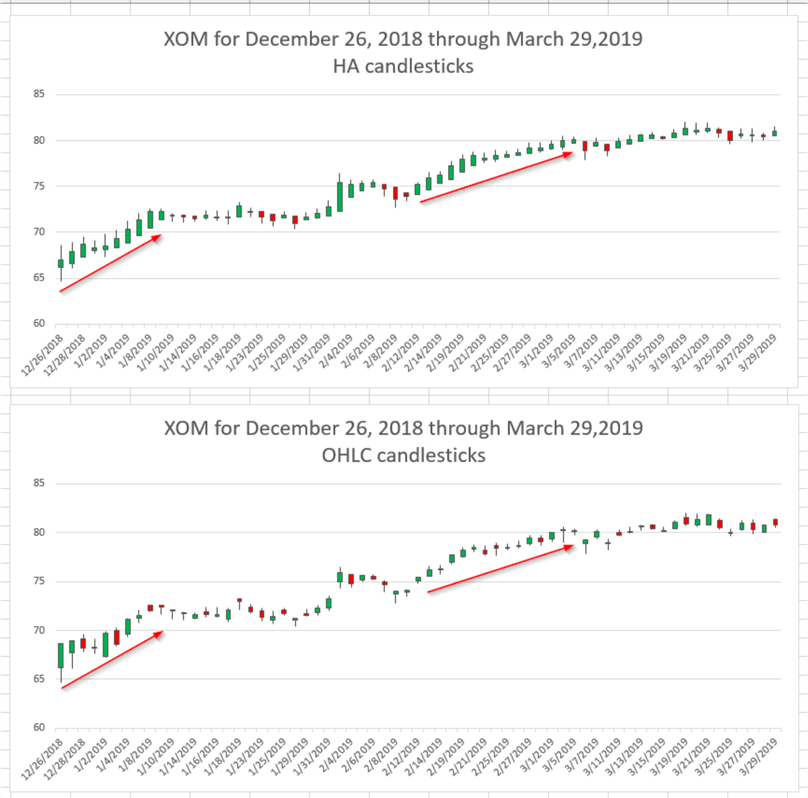 It is difficult to arrive at any firm conclusions about HA charts versus open, high, low, close observed price charts from just two pair of charts. However, being able to visualize the difference between the two charts can be an important first step about whether it is worthwhile pursuing a more analytical comparison of the two types of candlesticks across many different tickers for one or more sets of periods.

For those who would like to view results for another ticker, a third pair of charts are available in this tip's download for the JPM ticker (JPMorgan Chase & Co.). This additional pair reinforces the findings from the two preceding pairs of charts.

The download for this tip aims to give you the opportunity for a first-hand feel about how the code and screen shots were developed for this tip.