Displaying Subplots for SQL Server Data with Python and Matplotlib

I am a SQL professional assigned to support a team of data science engineers. The data science engineers mainly program in Python. To better interact with them, I started to acquire basic Python programming skills. My fellow team members recently started urging me to grow my Python skills by displaying charts in subplot sets. Please provide some sample Python code with corresponding charts to help me get started on responding to these requests.

Python can work with any of several charting libraries. This tip focuses on the Matplotlib library and the subplots method within the pyplot application programming interface for the Matplotlib library. Matplotlib through pyplot offers a rich object-oriented interface for displaying many different chart types, such as line, bar, pie, scatter, box, heatmap, and treemap charts. Furthermore, each chart type can be displayed with a wide selection of property settings. Also, you can display related datasets or the same dataset with different chart types in a set of subplots that belong to a figure object.

This tip primarily focuses on figure objects comprised of subplots containing line charts, but some examples also show scatter and bar charts. Line charts are particularly well suited for showing how a collection of data values change over time. Scatter and bar charts are better suited for revealing relationships and differences with categorical data, such as showing the differences between several different data science models or data sources.

The tutorial technique for this tip is to present a Python script, explain how the code works, and then show the figure with its corresponding charts. Some script examples are very similar so that the tip sometimes presents slightly different, but hopefully highly informative, variations on a common theme for showing multiple charts in one figure. Another tutorial technique is to have one script with two key lines that perform complementary functions. The script in the article shows with one line uncommented and the other line commented. Figures are presented and described with each of the two key lines uncommented.

This example starts with a SQL script for pulling the source data for the dataset for each year and month from a SQL Server table. The results set from the SQL script are manually copied to a Python script for building and displaying the figure with two subplots.

The following screenshot shows the SQL script and its results set for the example chart set in this section. 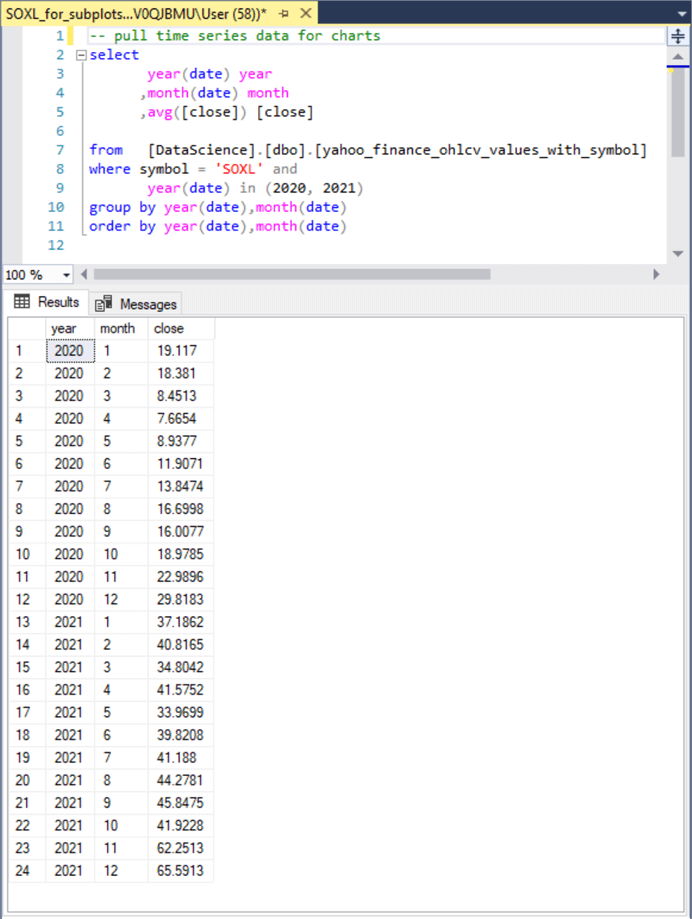 The next screenshot shows a Python script for the figure presented in this section. The script appears in an IDLE window. IDLE is an integrated development environment for Python that ships with the version of Python that you can download from Python.org. SQL developers can think of IDLE for Python in the same way they think of SSMS for TSQL. The top border of the IDLE window shows the Python file name and file path along with the version of Python being used (3.10.4).

The Python script starts with two import statements for referencing pyplot from the matplotlib library; the pyplot application programming interface has an alias of plt. The numpy library is another extension of the core Python code that offers mathematical functions, random number generators, linear algebra routines and more. Its alias in the script is np.

Next, the subplots method in pyplot (plt) specifies two subplots within a figure object named fig. The first parameter value (2) for the subplots method designates the number of rows in an array of subplots. The second parameter value (1) designates the number of columns in an array of charts. Because the first parameter is 2, the two subplots each are vertically stacked. The subplot identifiers are designated by ax1 for the top chart and ax2 for the bottom chart. Because there is one chart per subplot, this tip sometimes refers to a chart by the identifier for the subplot in which the chart resides.

The next two code blocks configure the charts within the ax1 and ax2 subplots.

The pyplot suptitle method assigns a title to the pair of vertically stacked charts. 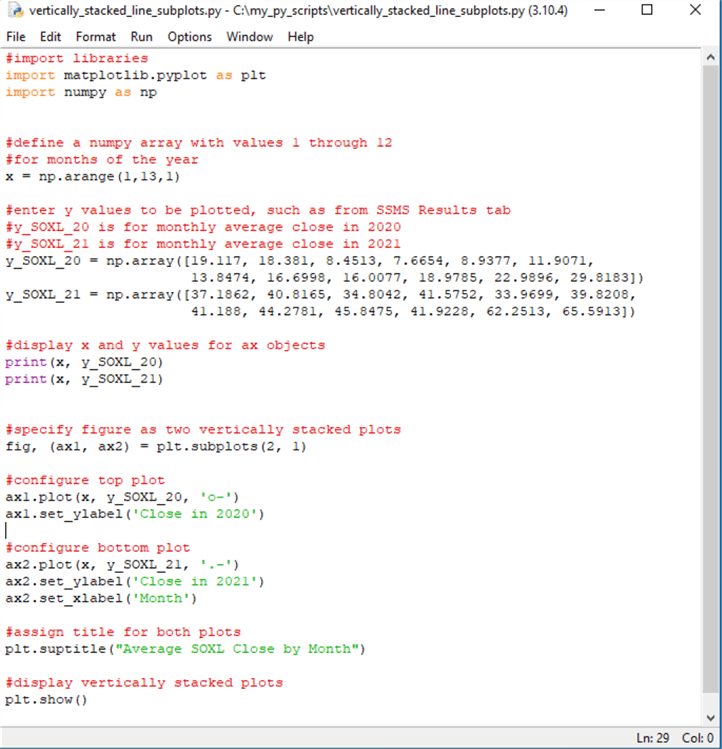 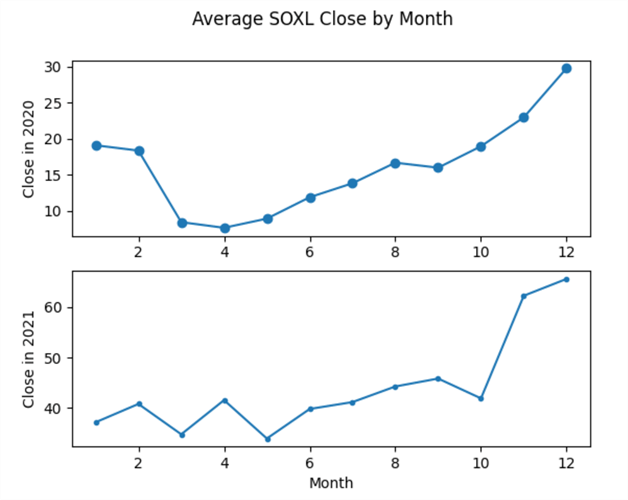 Instead of arranging the charts vertically in a figure, you can arrange them horizontally. This section presents and describes the Python script for achieving this goal. With a couple of minor exceptions, the code for this section is identical to the code in the preceding section.

Here is the Python script for displaying the line charts horizontally. The two highlighted lines are unique to this section. 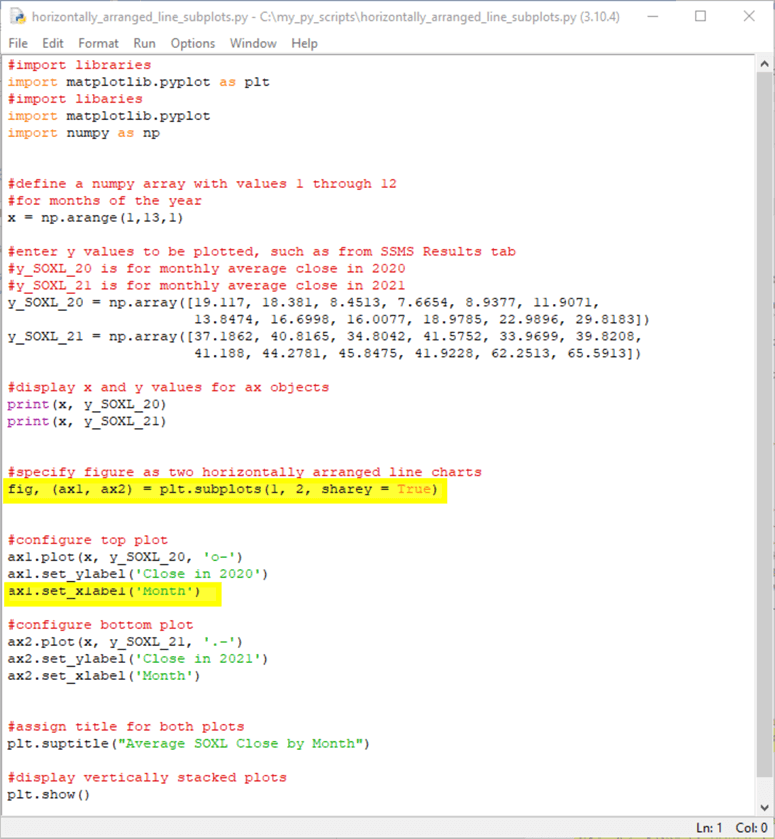 Here is the initial figure window from the preceding script. 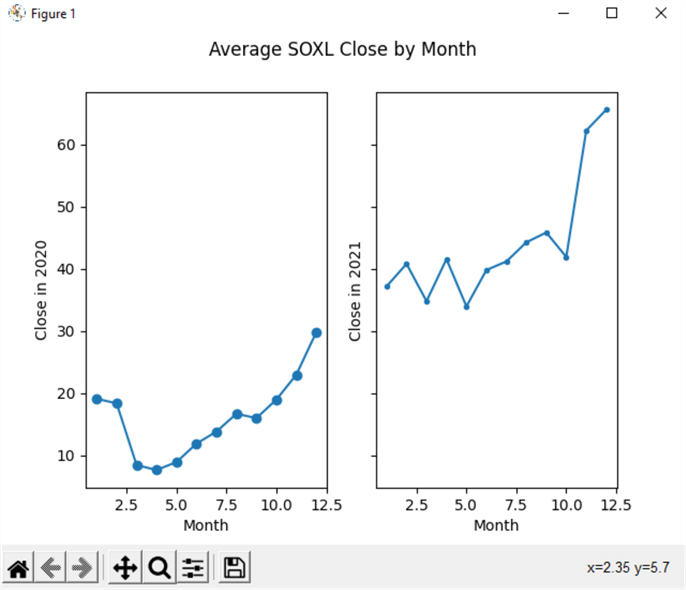 Here is an image with a stretched version of the preceding figure window. Notice how the x axis tick values are whole numbers in the range of 2 through 12. Another more precise solution for setting x axis and y axis values is presented in the next section. 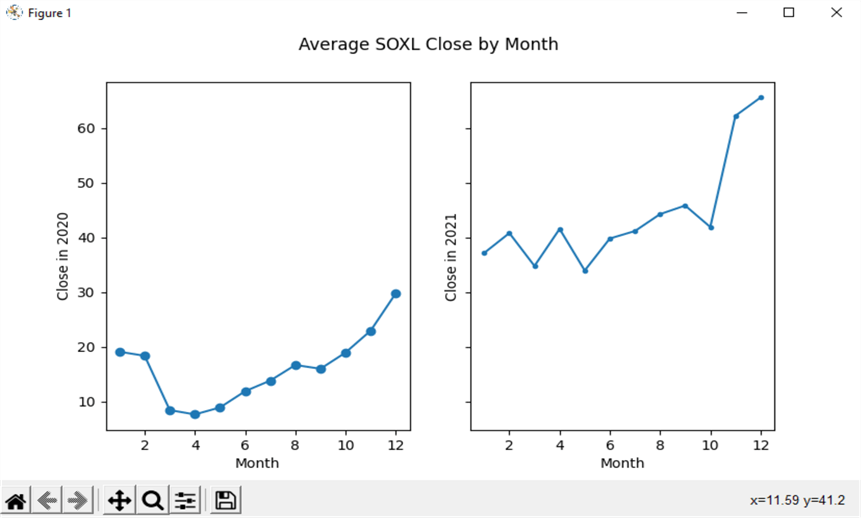 The four print function statements towards the middle of the following Python script display each pair of x and y coordinates.

After the four axs subplots containers are created, they are populated with x and y coordinate sets, and the line in each chart is assigned a color. The "tab:" prefix before color names indicates that matplotlib tries to match Tableau colors from the T10 categorical palette. Additionally, a title is assigned to each axs object with the set_title method for an axs object.

When creating chart sets with multiple chart elements per chart, matplotlib occasionally overwrites some chart elements on top of other chart elements. The tight_layout method for a figure object, such as fig, can often fix this kind of issue. You should invoke this method after all other plot element settings are made.

Finally, the show method for the plt alias is invoked to display the fig object. 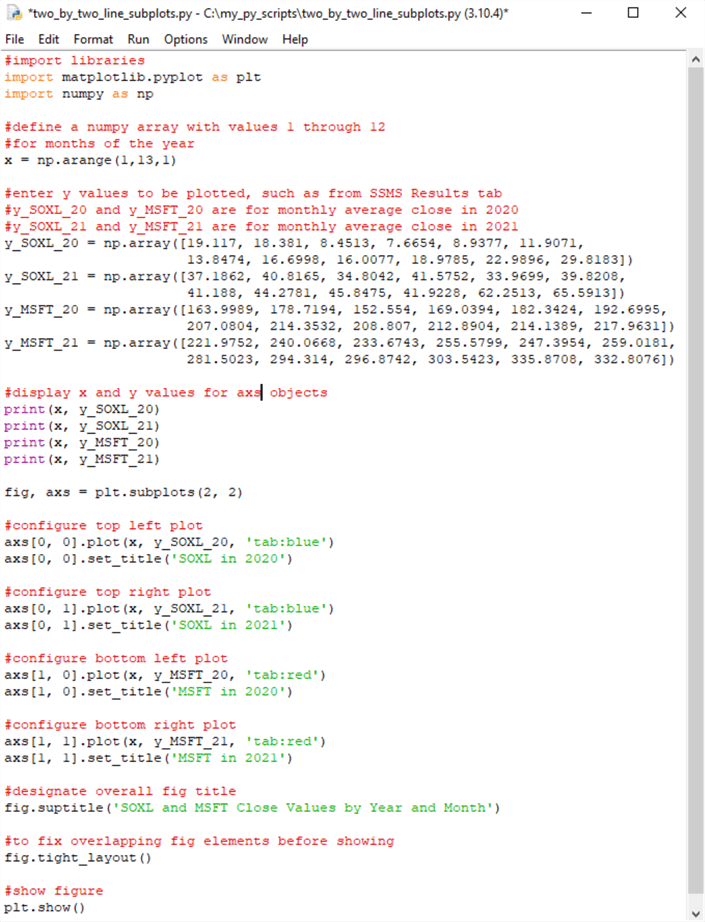 Notice that the x ticker values along the bottom axis of each chart has ticker values of 2.5, 7.5, and 12.5. The example after next in this section shows how to programmatically override the tickers that include .5 values. 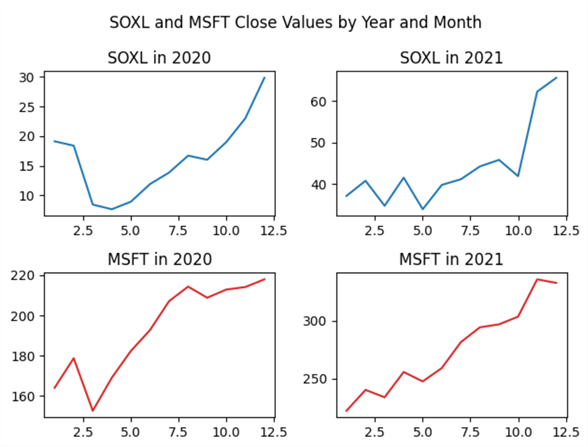 It may be helpful to show you the effect of omitting the invocation of the tight_layout method in the next to last line of code in this script. You can accomplish this by re-running the code with a comment marker (#) in front of the line of code that appears as "fig.tight_layout()".

As you can see, the chart titles for bottom pair of line charts are overwritten by the ticker values from the top pair of charts. In addition, the title for the overall set of charts (SOXL and MSFT Close Values by Year and Month) crowds the titles for the charts in the top pair of subplots in the rectangular grid within fig. 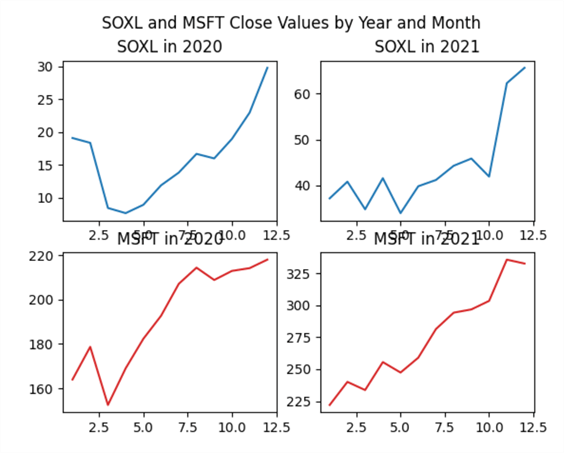 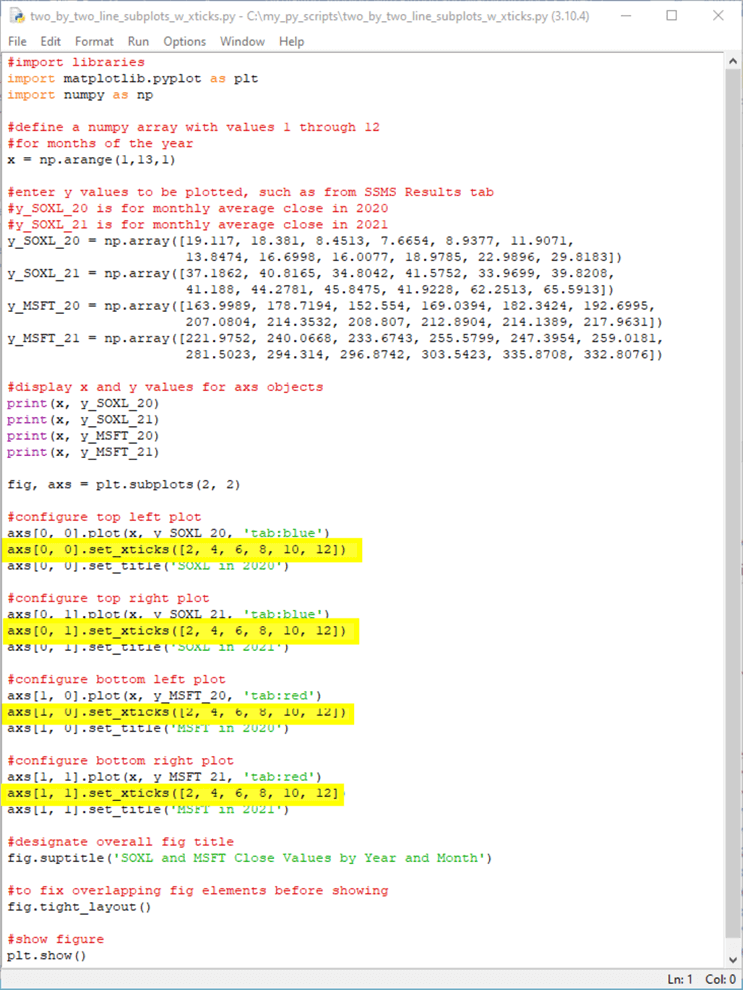 The following screenshot shows the set of line charts from the preceding script. As you can see, the x tick values for each chart have only whole integer numbers. This is because of the argument values for the set_xticks method. 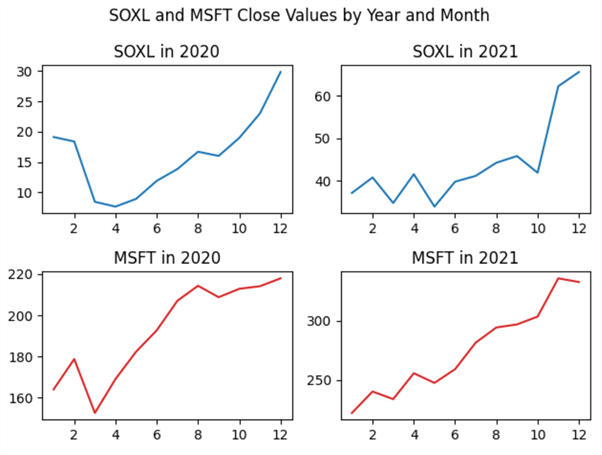 The preceding three sections showed different ways of displaying continuous metrics (average monthly close values for SOXL and MSFT ticker symbols) versus the months within a year. The discrete monthly values have an inherent order.

The use case for this section is derived from a prior tip that computes results for four different models that attempt to pick profitable trades for each of six different ticker symbols. Summary data from the use case example appear in the following table. The table has four columns.

This section presents two pairs of chart sets. Each pair illustrates how to turn a feature on or off.

Here is a Python script for displaying bar, scatter, and line charts for categorical data in a row with three subplots and one of two assignments for the sharey parameter of the subplots method. 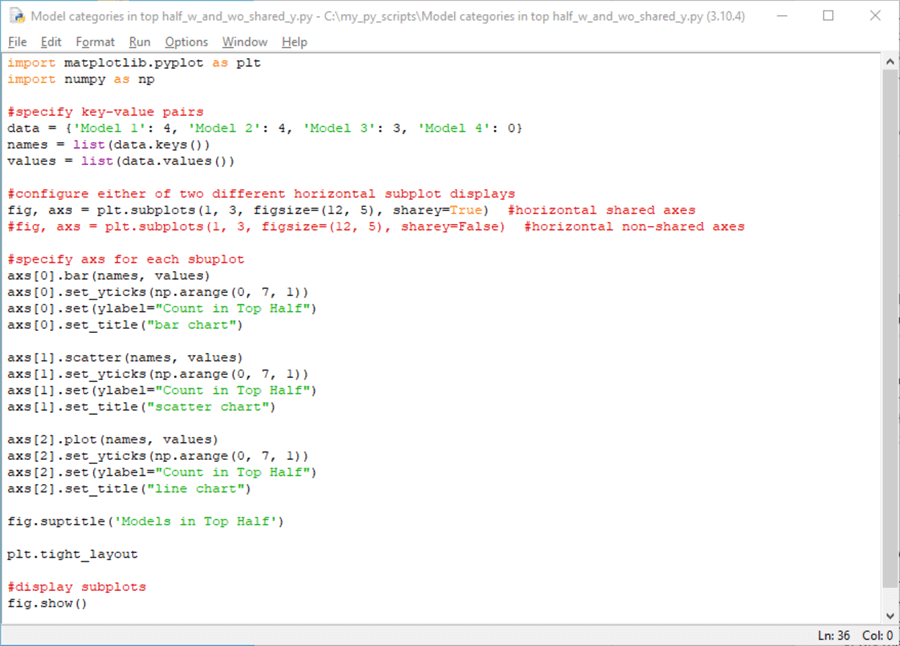 Here is a screenshot of the image from the preceding script with sharey=True.

Here is a screenshot of the image from the preceding script with sharey=False. Recall that to run the code with sharey equal to False, you need to insert a comment marker (#) before the first subplots statement and clear the comment marker from the second subplots statement. Notice that the only difference between the following chart and the preceding chart pertains to the ticker values for the charts in the second and third subplots.

Here is a Python script for displaying bar, scatter, and line charts for categorical data in a column with three subplots and one of two settings for constrained_layout. 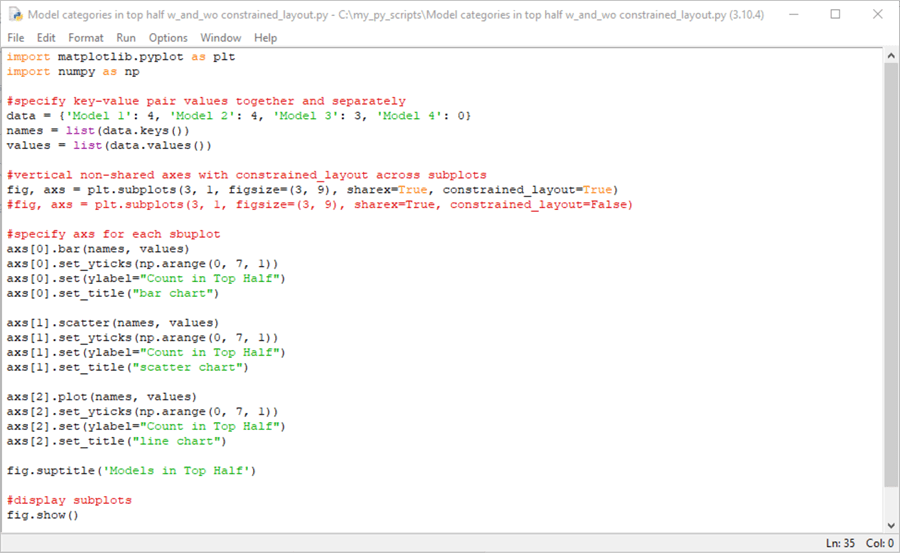 Here is a screenshot of the image from the preceding script with constrained_layout equal to True. The suptitle appears immediately above the title for the top subplots. This is a result of setting constrained_layout to True. Also, x ticker labels only appear along the bottom chart. This is because the sharex parameter equals True.

Here is a screenshot of the image from the preceding script with constrained_layout equal to False. The suptitle is followed by a gap before the chart title from within the first subplot. This is a result of setting constrained_layout to False. Also, x ticker labels only appear along the bottom chart. This is because the sharex parameter equals True.

The download file for this tip includes a couple of .png files with images of TSQL scripts and matching results sets. The download file also includes seven Python script files for creating a multi-charts set. Some of these files are meant to be edited so that you can view the resulting chart sets in a couple of different configurations.

One obvious next step is to make sure that you can run the code as described in the article. Next, consider re-running selected code examples with bottom half data as opposed to top half data. Finally, after you feel comfortable editing the code in this tip, start using your data instead of the sample data charted in the tip.