Using the Python programming language for data analytics is helpful and, in some cases, more efficient that using other tools. In this tutorial series we will examine Python functionality. As a scripting language, here too you may need to repeat certain blocks of code. This process allows you to automate the control flow of your program as needed.

To iterate a block of code, Python offers a specific instruction for repetition which is referred to as the "loop" construct. Looping is a handy and powerful way to execute the same or different instructions several times instead of hard coding a finite number of repetitions. Loops are critical constructs that are extremely helpful in building complex algorithms and programs. Beware - every loop has the inherent propensity to slip into a state of infinite execution. This and other points on Python loops will be covered in this Python tutorial. Let's begin by examining the different types of loops.

The while loop has a main line containing a conditional expression, a body with a unit of code and an optional else statement is used if there was no break that terminated the loop prior.

As you can see in the above example, the while-loop is typically used when you want to iterate a block of code while a certain condition is true (in fact, notice the similarity between the natural language and Python with while). As soon as the conditional expression returns a false outcome, the while loop terminates, and the program continues the execution of the code after the loop. A suitable example to illustrate the while construct is a program calculating the factorial of a number. In math, the factorial of a number n is the product of all positive integers less than or equal to n. Here is how to do it with a Python while loop, while also encapsulating the logic in a function:

The case of 1 is obvious while the case of 0 is defined to be 1. For our program these are both special cases that require a conditional expression. The rest of the logic follows that. The while loop continuously checks the value of the input argument, while we keep decrementing that value with 1 every step of the loop. This is how we multiply the result variable by the next value of the input argument. Here is the program in action: 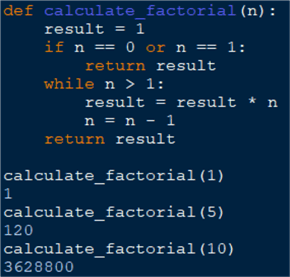 To illustrate how the else clause acts coupled with a while loop, consider the following example:

We have the simple task of checking if a variable is within a limit and display the current value of that variable. Here is the result: 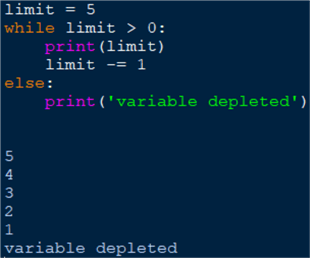 Notably, once we exit the while loop based on the defined condition (variable > 0), control jumps to the else clause.

Definite Loops or Python For Loop

Also known as "for loops", they provide the same result but in combination with a finite set of items. The general structure of the for loop statement is:

The list must be finite otherwise you will create an infinite loop which is rarely what you need. The other component -the "member" variable - is the iteration local variable that keeps count of how many times you need to loop. For example:

The for loop is often used to access the indices of the member variable from the list of variables that defines the bounds of the loop:

In the result you can see how we iterate over each element displaying its index and value at the same time:

Notice the range() function which is an iterator. It is helpful also in cases where you want to iterate over something but in reverse order: 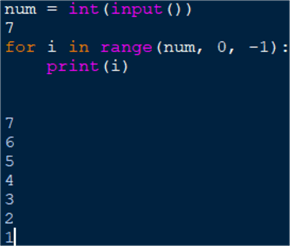 Some more details on the range function you can find in this prior tip on complex data types.

Here is another example of a for loop illustrating how you can also work with variable assignment and conditional expressions in the body of the loop. Let us imagine we need to find the largest number in a list of numbers:

Running this code, you get: 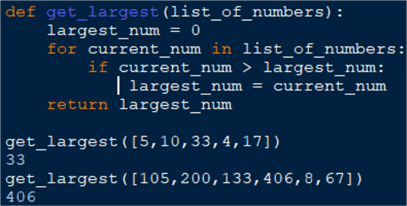 Nested loops consist of one outer loop whose body contains one or many inner (nested) loops. Here is how they work:

Inner loops may behave similarly to a cross join command. They can be useful in obtaining a Cartesian product of two collections. Let us imagine we needed to generate quickly tip titles based on technology and difficulty level: 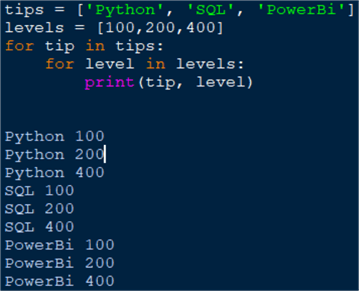 These operators provide further flexibility when working with loops.

The Break Statement terminates the immediate encompassing loop. Allows the programmer to exit the loop at a random place or make the "break" part of a logical construct, whose true or false (boolean) outcome will terminate the loop. For example, let us investigate another way to calculate a factorial: 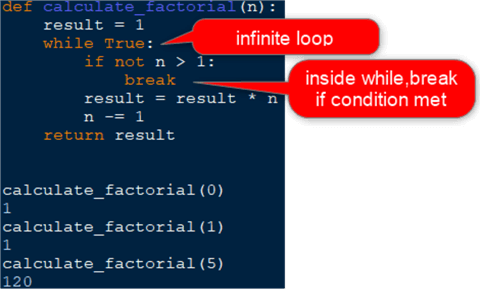 As compared to the previous approach this one is different: we explicitly create an infinite loop as True is always true. In the meantime, we make sure that upon a certain outcome (negative n or n = 0) the loop will terminate. Then we return the result from the calculation.

With continue you can finish the execution of the current iteration and jump to the next iteration without terminating the loop itself. In other words, continue is the opposite of break in the looping context because it instructs control to go to the immediate encompassing loop. Let us imagine we wanted to count the occurrences of the letter S in MSSQLTips: 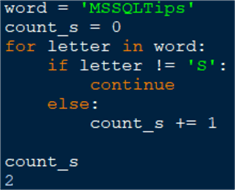 With the help of continue we ensure the variable count_s is incremented only when S occurs, i.e., when letter == S.

The pass operator is applicable to loops but unlike break and continue, it can be applied to other constructs as well. It does nothing in practice and is just a type of placeholder. Use it when you will implement your logic in the unit of code later:

In this tutorial, we covered the basics of iteration in Python: while loops, for loops, nested loops and their inherent operators break and continue. With this knowledge we can proceed to building more complex scripts and solutions.

Hristo Hristov is a data professional and Power Platform engineer with more than 12 years of experience. Between 2009 and 2016 he was a web engineering consultant working on projects for local and international clients. Since 2017, he has been working for Atlas Copco Airpower in Flanders, Belgium where he has tackled successfully multiple end-to-end digital transformation challenges. Hristo’s focu