We use Non-Sucking Service Manager (NSSM) to install Windows services written in Python (Allbee, 2018). NSSM provides a simple way to wrap the specific executable (i.e., the python.exe) along with arguments (i.e., the Python script) and make them available as a Windows service. The service helper program also can monitor the execution state and handle execution failures. In addition, this helper program records its progress to the Windows event log so we can use this information for troubleshooting.

To exhibit the use of NSSM, we write a Python script that scans the images on the MSSQLTips website's landing page. The Python script first reads the web content on the landing page. Next, the program discovers the URLs of images. We then use the "python-magic" module to identify image types by checking their headers. In this process, the script uses the "print()" function to print messages on the screen that is the standard output, denoted as stdout. In addition, we use the logging module to send debugging or error messages to the standard error, also known as stderr. This Python script does not include any specific code for running as a Windows service.

The version of NSSM used in this exercise is NSSM 2.24 (2014-08-31). We downloaded NSSM from the official website https://nssm.cc/. NSSM is a single file nssm.exe that does not need any particular installation. The author tested the project on Windows 10 Pro 10.0 <X64> and ran the Python script with Python 3.9.7 (64-bit). The script extracted web content and images from the landing page of the website https://www.mssqltips.com/. The IDE is Microsoft Visual Studio Community 2022 (64-bit).

A typical Python program often uses third-party libraries. In this case, we recommend running a Python script in an isolated environment. Therefore, we follow the instructions on the tip (Zhou, 2021) to create a Python virtual environment in the "C:\pyvirtuals\WebImageCheck" folder. The "requirements.txt" file contains all packages the virtual environment requires. The following block shows the content in the file.

We then create the Python script "WebImageCheck.py" and put it in the "C:\pyapps\WebImageCheck" folder. Click here to download the source code. The Python script consists of several user-defined functions. The function "check_web_page_images()" is the main function and invokes others to implement the business requirements. The following code block indicates that we execute the main function infinitely. Therefore, the script stays running after we run the script. In this case, we check the images on the MSSQLTips landing page every five seconds.

The main function sends the starting and ending time of execution to the standard output, i.e., the screen. Some other functions, for example, the "process_web_request()" function, print the error messages to the standard output. When troubleshooting, we often need to monitor the program execution. The Python script uses the logging module to output logs to the standard error. The "logging.basicConfig()" function help configure some basic parameters for logging in Python, as shown in the preceding code block. Therefore, we can view debugging messages on the screen. We use the following command line to ensure we can run the Python script correctly:

The output should look like Figure 1. The screenshot shows the debugging messages from the logging module and the "print()" function. The image examination process starts with extracting web content from the landing page. Next, the program discovers all image links on the web page. After downloading images and identifying image types, the "check_web_page_images" function completes execution. The process repeats every five seconds. Even though this long-running script can satisfy business requirements, we must log in to the Windows system to run the Python script. We want to run the Python script as a Windows service to eliminate human intervention.

Figure 1 Run the Python Script in the Command Window

2 – Using Command Lines to Install and Manage a Windows Service

NSSM is a service helper program, which we can download the zip package from its official website https://nssm.cc/. When we unzip the file, we can find the executable “nssm.exe.” NSSM is a single file and is easy to install. First, we copy the file “nssm.exe” to a folder, for example, “C:\NSSM,” on the Windows system. We then add the folder path to the PATH environment variable. Figure 2 illustrates the PATH variable’s values. Note that running multiple instances or different versions of NSSM from various locations may be confusing. Therefore, we should reference the official website for more information when upgrading NSSM. 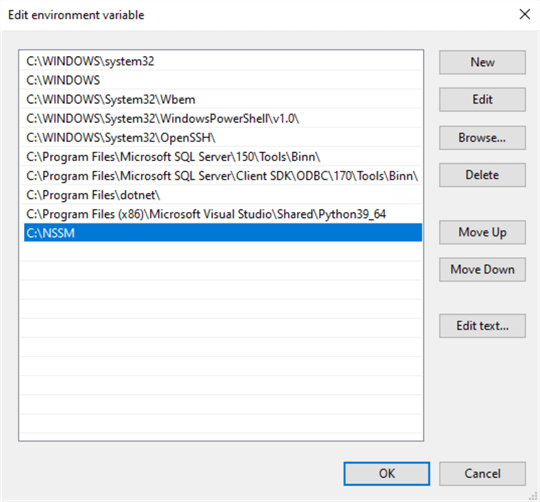 Figure 2 Add the NSSM Path to the PATH Environment Variable

Run the following command in the Command Prompt to install the service (Dano, 2020). Figure 4 illustrates the output after running the installation command. The command line generates a Windows system log (Event ID 7045), as shown in Figure 5. The log message confirms that we installed the Windows service. The log message also indicates the service name, Service file name, service type, and service start type. Note that the service file name is “C:\NSSM\nssm.exe.” 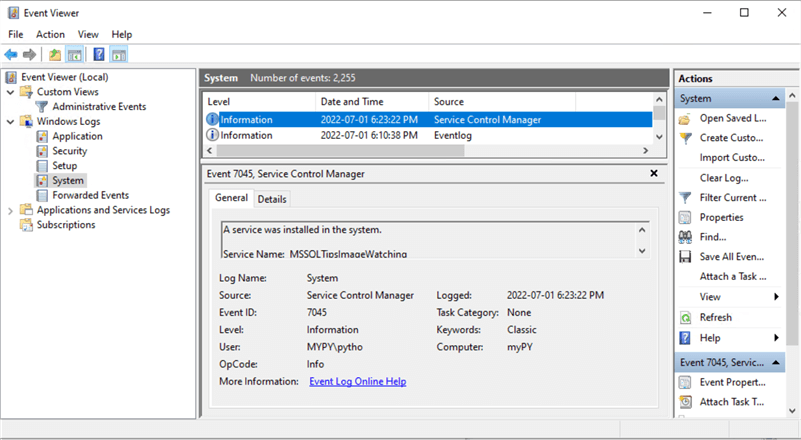 It is convenient for us to troubleshoot a Python script when we can view output messages. As shown in Figure 1, we can watch the script execution through the console output. However, windows services run in the background, and the console window is unavailable. Fortunately, NSSM can capture log messages generated by the script and save them into text files. We use the following two commands to configure text files for the standard output (stdout) and the standard error (stderr). Figure 6 illustrates the outcome in the command window. 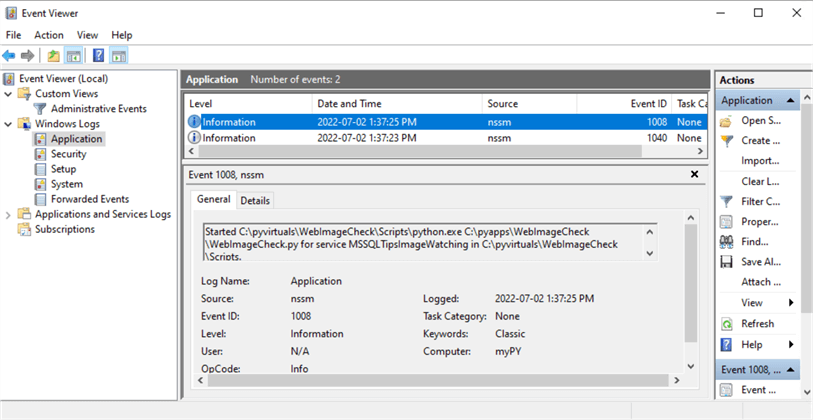 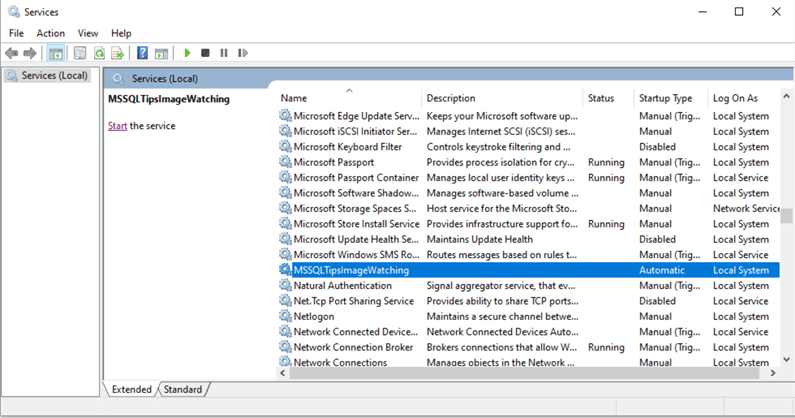 Figure 9 Use the Service Control Manager to Manually Start Services

We use the following command line to stop the service. Figure 11 shows the output of the command.

NSSM provides the GUI for us to access the Windows service configuration. We use the following command line to open the NSSM service editor, as shown in Figure 12. The editor GUI has several tabs with lots of configurable parameters. For example, the Details tab lists system details about the service. We can edit the display name, description, and startup type through the Details table. After the edition, we click the “Edit service” button to apply the changes. 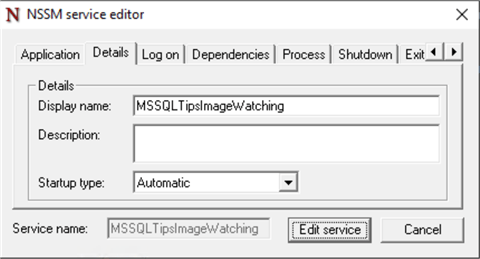 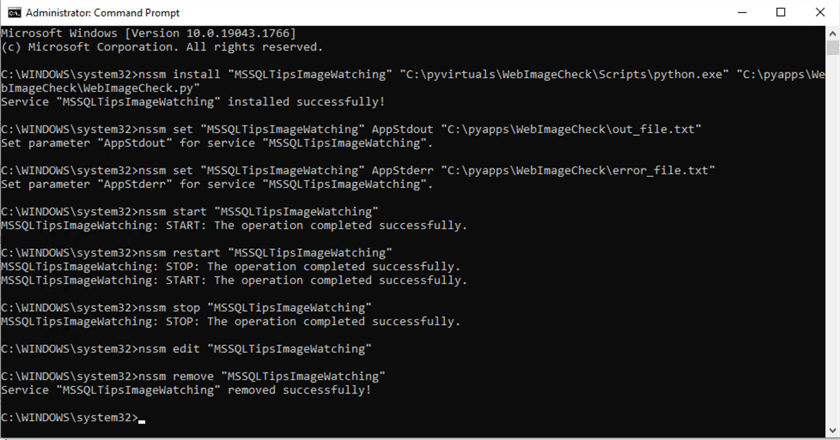 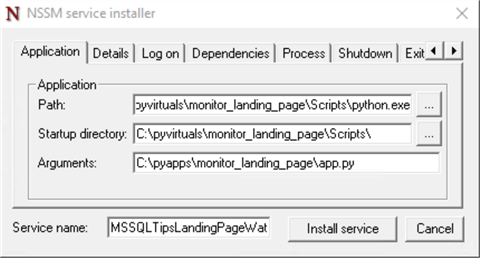 Since the Python script we used in this tip has the standard output and standard error, we use the I/O tab to specify the output files. When enabling I/O redirection, we usually configure the rotation of output files on the File rotation tab. However, we do not recommend using standard output in a Windows service, even though we may use the print() function for troubleshooting purposes. Therefore, this tip does not dig into the I/O settings in more depth.

Since the Python script we used in this tip has the standard output and standard error, we use the I/O tab to specify the output files. When enabling I/O redirection, we usually configure the rotation of output files on the File rotation tab. However, we do not recommend using standard output in a Windows service, even though we may use the print() function for troubleshooting purposes. Therefore, this tip does not dig into the I/O settings in great depth. For completeness, we specify the output files according to Figure 17. 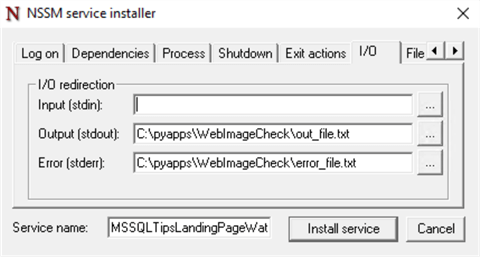 We then click on the “Install service” button to install the Windows service. Next, an NSSM pop-up window, as shown in Figure 18, appears and confirms that we installed the service successfully. The windows operation system treats this service as a proper Windows service. Therefore, we can use the SCM to configure all standard Windows service settings and properties.

Since we wanted a long-running Python script to stay running whenever the computer was up, we used a service helper program, the Non-Sucking Service Manager (NSSM), to create a Windows service. The service helper program allowed us to create a Window service to run Python scripts. After installing the service, we used NSSM to manage the service. We also used the Service Control Manager and Event Viewer to help maintain the service.

We first explored the steps to create a Python virtual environment. We then briefly introduced the Python script that extracts web content and identifies image types on the web page. Subsequently, we tested the Python script to ensure it satisfied the business requirements. Next, we used NSSM commands to install and manage a Windows service. Moreover, we captured log messages generated by the Python script when running the service. Here is a list of commands used in this tip:

Glenn, W. (2017). How to Run Any Program as a Background Service in Windows. https://www.howtogeek.com/50786/using-srvstart-to-run-any-application-as-a-windows-service/.