I'm new to data warehousing and working with data in general. In a couple of articles and job postings I have seen the acronym ETL. For example, they're searching for an ETL developer with experience in SSIS or Azure Data Factory (ADF). What exactly does ETL mean?

ETL is an acronym standing for "Extract, Transform and Load". It's a term that originated in the 1970s and is often used in the context of data warehousing for decision making, data analysis, data visualization and more. However, it can be used in a broader context of data integration. Any system where data is extracted from one or more source systems and is copied into a destination system where the data is represented differently than in the source(s), might be called an ETL process.

We can summarize the concept of ETL in the following diagram:

In the Extract data phase of ETL, data is ingested from one or more sources (line of business, ERP, CRM, raw data, IOT, legacy systems, large data sets in the AWS, Azure or Google cloud, etc.). These sources can be anything, as long as it contains some sort of data of course. We can divide source data generally in three categories:

An example of a JSON file with a hierarchy (taken from the tip Introducing JSON for SQL Server): 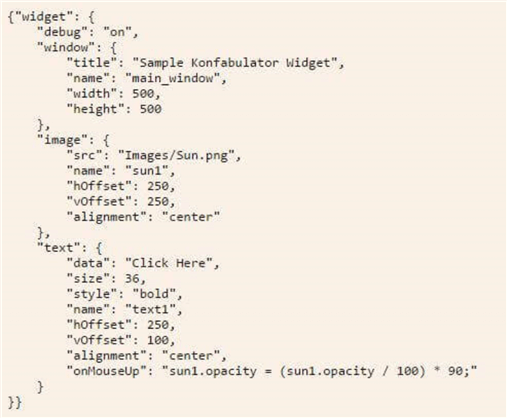 There are also different methods on how much of the data is extracted:

CDC and incremental loads give you the best performance since you only need to extract a small subset of the data. Full loads on the other hand are very easy to implement, but put more burden on the source system.

Once the data is extracted, certain data transformations can be applied. These can be business rules, data quality checks or standardizing of the data. Transformations can be done in various ways: by using standard components of an ETL tool, by writing expressions in SQL or by using a programming language such as Python, C#, Java and so on. The location where the data is transformed can also vary wildly: inside the memory of a machine running the ETL tool, inside the database engine, in a data lake (most likely some sort of blob storage), in a serverless environment such as Azure Functions, Azure Logic Apps, etc.

There are many possible transformations and it's impossible to list them all. Just to give you an idea of what is possible, here's a list with some examples:

There's a bit of a discussion whether a data warehouse should do many corrections on a data set. Some opinions say that the data should reflect the reality and thus no changes should be made to the data. In the data vault modelling technique, a "raw vault" will capture exactly the data as it was found in the source systems. In a "business vault", modifications and business rules can be applied to the data. It's up to you to decide what is the right action for your environment.

The final stage of the ETL process is loading the (optionally) transformed data into a destination. In some tools, the destination is also referred to as "sink". In many cases, the destination is a relational database (especially in data warehouse projects), but as mentioned, any process moving data around can be labelled as "ETL". Other destinations can include a data lake (e.g. Azure Blob Storage or Azure Data Lake storage) or a file system. Both are just containers to store data, the actual data format can also vary wildly: CSV, JSON, XML, Parquet… Data can also be exported to be picked up by external systems. Data can be dropped in an Excel file for further analyses or exports can be dropped on an (S)FTP server.

Often, the incoming data of an incremental load must be checked against the destination. Is a row new, or does it already exist in the destination? If yes, are there any fields that have changed? If yes again, we need to update the existing row. We can summarize this in the following flow chart: 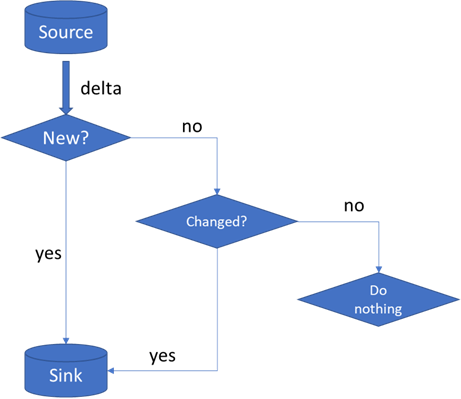 This process is sometimes called an "upsert", the combination of updates and inserts. In the SQL language, both can be combined with the MERGE statement. With an incremental load, you cannot check immediately for deleted records, since you only loaded a subset of the data. If you need to find out if there are deletes, you'll need to do a full load of the business keys and check those against the destination. Let's illustrate this concept with an example. We have a source table with 3 rows:

With the initial load, we load all 3 rows to our destination. Let's say we update 1 row and delete 1 row.

Because we're only loading one single column, the impact is much less than when we're doing a full load of the entire table.

Implementing a full load is simpler: empty the destination and load the data.

The possibilities for destinations are endless, but most of the time they all have one thing in common: the data is structured and formatted according to some business requirements. Frequently, the data is better structured than it was in the source.