As far as data management and RDBMS rules are concerned, relational databases are the most adoptable way for maintaining data with a reasonable level of concurrency and while supporting data management activities such as backups, mass purges, changing data structures, etc.

One problem is the difference in programming languages in traditional applications.  The SQL (Structured Query Language) language is a declarative language that became the "Data Language" used for describing "what I need" and "where to fetch it from" in most organizations.  OOP (Object Oriented Programming) languages became the most common practice among developers widely adopted by R&D (Research and Development) organizations around the world.  So how do we bridge the gap?

Those two trends created a need for a "bridge" that will cover the gap by translating request from object oriented programming languages to SQL.   In most cases the DAL (Data Access Layer) is used to describe the mechanism (mainly proprietary) built to manage all this "data bridging task" in a centralized way.

Since database vendors (Microsoft, Oracle, IBM, etc.) offer a very large set of proprietary commands in their specific flavor of in SQL, translation in the DAL has to support many options.  What ends up happening is the implementation details sometimes lose many of the performance optimizations built into the engine.  This has been causing many of these DAL's to be implemented in a very straight forward way, that being break down the request to smaller pieces translating each to it's equivalent SQL statements and building the "SELECT... FROM... WHERE..." clause that will figuratively do the job.

Over the years I have been observing some DAL's design and implementation and from my experience a "machine written SQL statement" sometimes tend to be very long text statements.  Just the other day the question popped up "What is the maximum text length of queries should we aim for?", so I checked the Maximum Capacity Specifications for SQL Server 2005 and found that the length of a string containing SQL statements (i.e. batch size) for both 32 and 64 bit systems is defined as 65,536 * Network packet size. The default network packet size is 4096, so the SQL statement text is limited for 256 MB.

I suspected that long text queries (with much less than 256 MB) will create some challenge for the server's CPU.  So I thought this should be tested and published in this tip. So for the scope of this tip we are trying to address these items:

For my test I am going to create a table (called t1000) with 200,000 records. This table has many different data types because I think it is a reasonable representation of many production tables work with on a regular basis. The characteristics of this table include:

Since I am planning to test some very long queries, I will produce them in an automatic way. My first thought was to just print some long text to the screen and then paste it to a new SQL Server Management Studio's query window. What I found out was that long queries (hundreds of KB) are a bit heavy for the Management Studio (especially when word wrap is on) so I turned to the next best thing - files.

Writing text files can be done in various programming languages but since we deal with SQL Server I'll demonstrate a T-SQL way I learned from Reading and Writing Files in SQL Server using T-SQL - a great article by Phil Factor.  I will use the following stored procedure, originally published by Phil here with a few tweaks for my needs.

Since the stored procedure above uses OLE Automation you will need to enable it on your SQL Server because this option is turned off by default due to security concerns.  It is still fun playing with it :). Turning on the Ole Automation is done with the following command:

In case your server does not have Ole Automation enabled, trying to run the above stored procedure will produce the following error:

Script: What SQL statement should I use for my test?

I want to write a simple query that will return only one row but will have a very long WHERE clause.  The following is an example query:

All that is left is to create a T-SQL block that will create a query similar to the one above:

Here is an explanation of the code:

For each file I will also add the code which will use the correct database, the dbcc commands to flush the cache and SET STATISTICS to show the IO, CPU and execution plan of the query:

As I mentioned earlier loading such long queries can be a bit heavy for Management Studio.  So during my testing I ran the queries with the Sqlcmd Utility (new and much enhanced version of osql) which is perfect for running queries entered at the command line or from a parameter file.

Running the test queries with sqlcmd utility is very easy.  For testing purposes I used the command below to connect to the SQL Server instance, read from an input file and write output to an file.

Now that we have run the queries from above, lets take a look at the result:

Based on the analysis, I would like to bring attention on two specific portions of the results:

These results show the following trends:

I have summarized the results into this Excel file; though the bottom line is included in the following table and graph:

The graphic below outlines the size of the query and the CPU time in milliseconds for the three tests conducted separated by a comma.  Based on this information, I believe we have found out that lengthy SQL Server queries will consume your CPU. 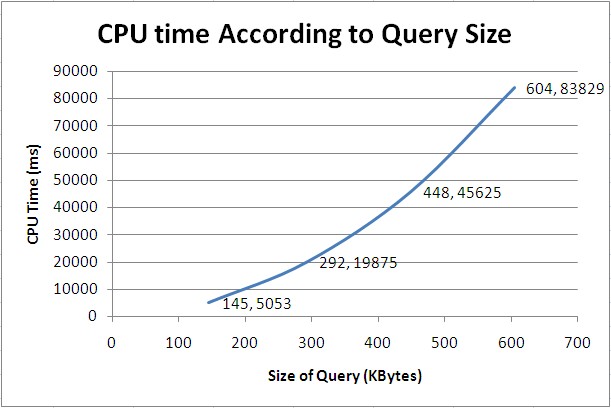 Tal Olier is a database expert currently working for HP holding various positions in IT and R&D departments.