As part of a performance optimization project for one of my customers, I changed multiple indexes and wanted to assess the performance improvement from these changes. The problem was that each index had been used by a number of different queries and identifying those queries, as well as measuring their key performance metrics before/after the index changes required a lot of manual work. As you may know, the SQL 2016 Query Store feature makes this task much easier, however what do you do if your SQL Server version is earlier than 2016?  In this tip I'll show how you can automate this task using custom performance collection tools and reports.

Overview and Use Case Scenarios

There are many different scenarios which would require assessing SQL Server query performance changes, like:

To come up with definitive answers for these scenarios, the following tasks need to be executed:

You could probably answer this question easily, if your database contains only a few tables and queries, however it becomes challenging if you have tables being referenced by dozens of views, procedures, and ad-hoc queries. You could try to get this information from query plans stored in the SQL cache, however because the cache contains only the latest compiled version of each execution plan, your execution statistics would be incomplete. Another limitation of this approach is that it involves running resource intensive XML parsing queries to extract table names from execution plans, which may impact performance of production servers.

You can use following metrics to measure improvements:

Your approach would depend on the objectives of your query optimization. If your goal was to improve overall query performance, I'd suggest using query execution cost as a comparison metric, because it contains composite measures of memory, CPU and hard disk resource utilization. On the other hand, if you're more interested in reducing duration of your queries, then querying elapsed time related metrics would be more appropriate. Lastly, if you're looking to resolve resource bottlenecks for memory, CPU or hard disk, then metrics from worker time or logical reads or writes would be best.

Identify the tool for comparison

You could use Excel for simple comparison, however that would require lots of manual work to build appropriate comparison formulas. Another approach would be using SSRS reports, which also requires some up front development work. However, as you will see below that work pays off if you're doing lots of comparisons.

The solution described below allows us to address the above items.

How to use a custom query store to measure query improvements?

In one of my earlier tips I described a custom query collection tool. It allows you to collect query execution statistics from multiple production servers, store them in a central repository and build custom reports based on that repository.

Advantages of this approach are:

I created a collection of SSRS reports, based on the above described solution, which will make the performance comparison task much easier.

Once you get a list of queries based on a certain table, you can drill down into each query's high level execution statistics as shown below:

This view allows you to see the number of execution plans collected for this query (each plan is represented with a different color), as well as their relative performance. On this particular example, a quick glance of this view reveals that the second execution plan has resulted in much better performance. I've included the following performance metrics in this view:

This view is based on a stored procedure, which returns other performance metrics as well and they could easily be embedded into the report if required. This report has drill through action on the query text field and by clicking on the query text you can switch to a detailed table report as shown below.

You can view the XML content of each execution plan by expanding the Plan Hash column, as shown below:

In the next section I'll explain the deployment process for these reports.

You can follow the below steps to configure the data sources for the reports.  The process is to collect the data on each production server and then replicate the data to a Central Server where the analysis and reporting takes place.

Before getting started, review my previous article for more details of this Central Server configuration and data collection process.  This will need to be in place first, prior to adding the additional functionality listed below.

1 - Execute the following script on each production server where you want to collect data.  This will collect table row stats.

2 - Add the new table TableRowStats to a publication to allow data replication to the central server.  You will need to do this for each server where you are collecting data. You can read more about adding new tables to replication here.

3 - On the central server, execute the following script to create a stored procedure which will serve as a data source for the new reports:

4 - On the central server execute the following script to enable XML indexes on the QueryPlan table:

Please note-while these indexes will improve performance of our reports, enabling them on the central server will not cause them to be enabled on the production servers, due to configuration filters on related articles.

5 - On the central server's report server, create folders Data Sources and Reports as shown below:

6 - On the central server, create data source PerfStatsDS inside the folder Data Sources with the following settings: 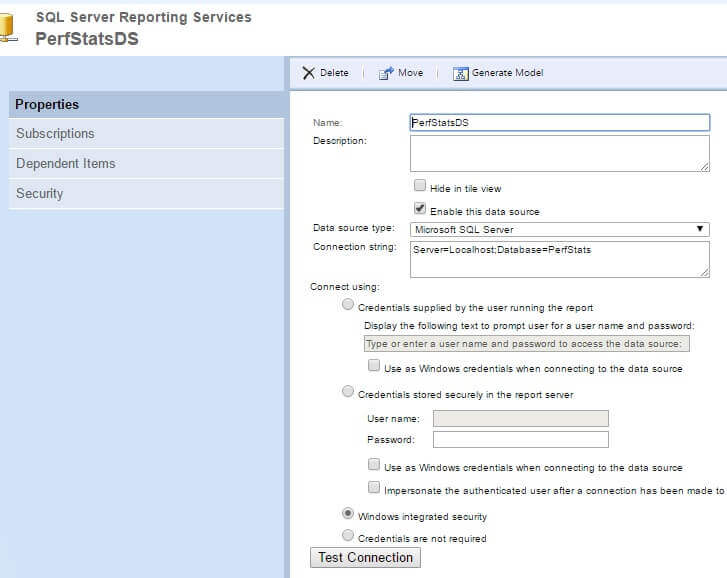 To measure performance changes, you need to run the job CollectQueryPerfStats (see this tip for details) on your production server after queries/reports have been executed that you're interested in analyzing. Make the necessary changes to the queries/reports and run the same job again to collect new execution plans. Make sure the data is replicated to the central server and then run the comparison reports to measure improvements.

Performance tuning is a creative process which requires a lot of attention and manual work. However, with the right tools on hand you can reduce manual work efforts related to measurements of results and focus on the tuning process.