Reference data is added to the SQL Server database by multiple developers and testers, thereby causing inconsistencies in the database due to reference data updated by one developer getting overwritten by another developer/tester and so on.

To overcome this issue, adopt reference data best practices by using Merge scripts which not only avoids such conflicts, but also keeps the database in a consistent and reliable state.  Please refer to my previous tip to get a basic understanding of reference data if you are not already familiar with it.

In the first part of the article we replicated the scenario where two different database developers are publishing reference data (tables) to their debug databases followed by a shared development database using a post deployment script.

The reason being, the Always re-create database option is checked under Target Connection String in SQL Database Project, which is fine to do as far as the debug database and Local Development Environment is concerned, but it does not work properly when it comes to a shared development environment.

To resolve this, we unchecked the Always re-create database option and introduced a change script using “IF Not Exists” in data scripts in such a way that the reference data is only written to the tables if it has not already been written.

This can be illustrated as follows:

Please refer to part-1 of this article to better understand how to implement the first solution by using IF NOT Exists logic in data scripts to deploy reference data to a debug database followed by a shared development database.

The use of “IF NOT Exists logic” works well from one perspective, but this is not an optimum solution to deploy reference tables data by multiple developers.

This approach has the following limitations despite the fact that it is applicable:

A better way to deploy reference tables (with data) to the desired environments managed by multiple developers is to use a merge script.

Moreover, we have not purely made our data script declarative which means the script should be totally repeatable no matter how many times it runs against whatever environment.

Merge was introduced in SQL Server 2008 and is compatible with all versions after that including Azure SQL Database.

Add New Name and ID When Not in Target
WHEN NOT MATCHED BY TARGET THEN
INSERT (ID, Name)
VALUES (ID, Name)

Review the projects where they were left in the first part of this article to proceed further. 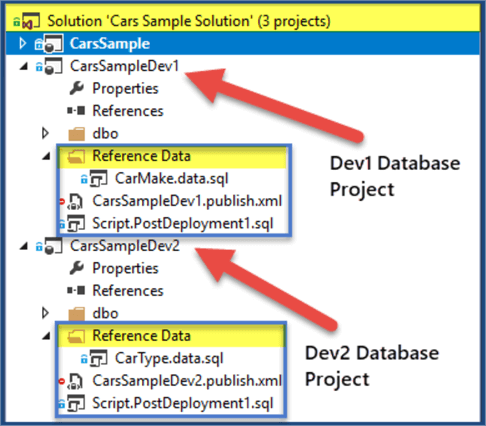 We have used LocalDB to replicate Local Development Environment as follows: 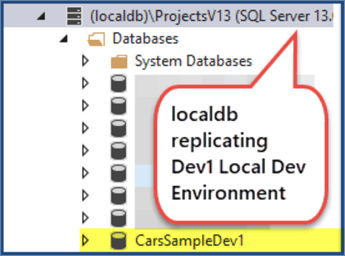 The same localdb is used to replicate Dev2 Local Development Environment as follows: 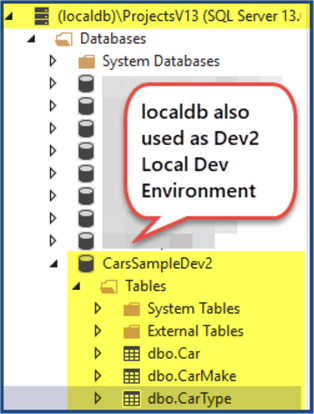 Then SQL Server instance is used to mock a shared development environment as shown below: 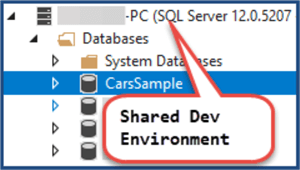 If we want the data script managed by Dev1 to be written successfully on a local dev database and a shared dev database then a Merge script is the answer.

Since Merge is capable of handling the situation when data already exists, let's uncheck “Always re-create database” under Database Project Settings > Debug.  Deployment options for both Dev1 and Dev2:

Press F5 to start deploying changes to the local dev environment (localdb in our case) for Dev1 first: 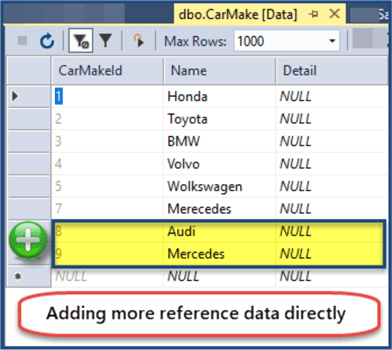 The Merge script has synched the database project with the debug database (Local Development Environment) without the need of using the “Always re-create database” option. 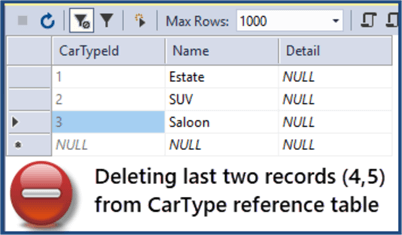 Debugging the CarSampleDev2 database project gets the deleted records back: 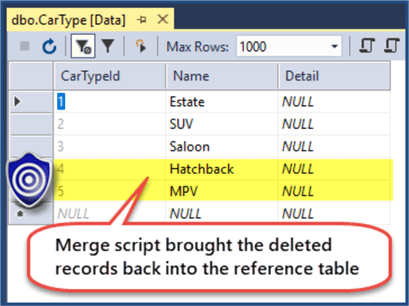 Next, use publish script to deploy dev2 changes (CarsSampleDev2.publish.xml) to the shared dev environment. 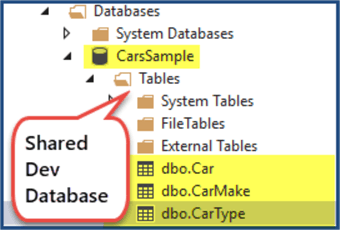 Congratulations, the Merge script has been applied successfully to deploy reference tables to target database environment(s).