The fundamental process in the machine learning development life cycle is identifying the dependent and independent variables for developing a data model. The two basic categories of supervised machine learning are classification and regression.

The first step for any data science exercise is analyzing sample data and determining fields of interest. So, we need to consider a sample dataset that we will use for this exercise, from which we will predict the output of dependent variable using the independent variable. Data Quality is a crucial factor for data science, for which ETL, MDM and other mechanisms are applied to standardize and cleanse data. As our focus in on learning the machine learning model, so we would consider it as granted that we have access to processed quality data.

As we have considered the preliminary tasks in machine learning lifecycle as granted, we will be using the dataset as shown below, having just two fields. Generally, after applying techniques like exploratory data analysis, principal component analysis, dimensionality reduction etc., the dependent and independent fields of interest are identified. In the sample dataset of Celsius and Fahrenheit that we are using, consider C as the independent field and F as the dependent or the response field. Our intention is to find the relationship between the two variables from the below dataset.

In real-life scenarios, statistical models would almost never have a perfect linear relationship unless and until it’s a deterministic model. One short-cut method of determining whether linear regression can be applied to the data in question is by creating a scatterplot of dependent versus independent variables and creating a trend line to analyze whether there is a linear or near-linear relationship.

If we create a scatterplot of the data shown above, it would look as shown in the picture below, which is a strong indicator that linear regression algorithms can be applied on this data. 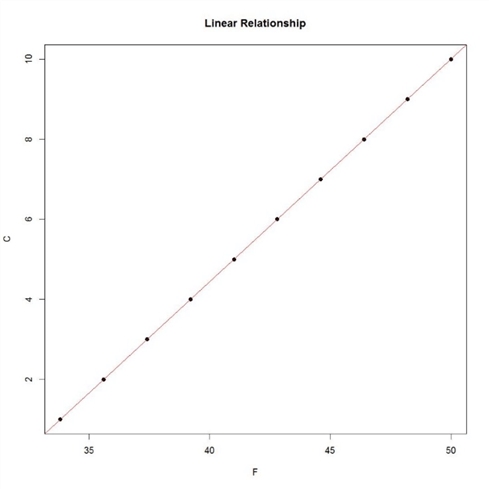 We intend to discover the relationship between Celsius and Fahrenheit using linear regression algorithm, and we would implement the same using Python and T-SQL, with the assumption that this data is hosted in SQL Server. Create a table named Readings which has the readings of Celsius and Fahrenheit as shown below before proceeding the actual algorithm implementation. 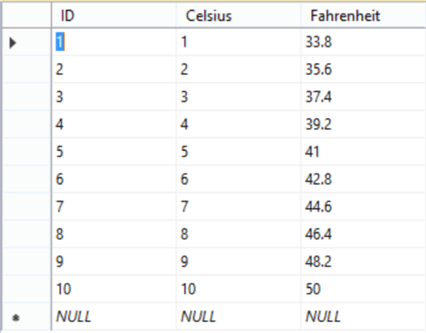 We will be implementing the T-SQL code for the linear regression algorithm with the approach mentioned below.

Execute the below code to create a linear model, train the data model using the above dataset and finally predict the output for a given input value.

Once you execute the above code, the output would look as shown below. From a model life-cycle perspective, we may want to store, extract and use the model at required. For the same we can store the model in a varbinary variable after serializing the model, and deserialize it while extraction. You can learn about this from an example explained in this tip.

We successfully created the model and predicted the output too. But the key value of creating the model is to find the co-efficient values, which gives insights to data analysts or data scientists regarding the influence of independent field on the dependent field. To find out the coefficients “a” and “b”, just print the summary of your linear model, and you should be able to find result as shown below. 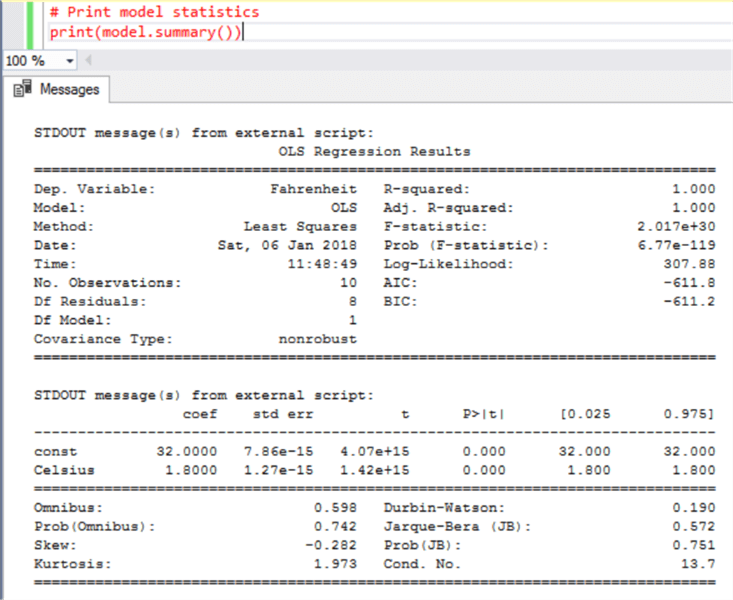 Some points that can be derived from the above result are as follows:

This means 1 degree Celsius would be 33.8-degree Fahrenheit. Using this equation with the derived coefficients, we can predict the value of Fahrenheit for any given value of Celsius. We have developed a model using Linear Regression algorithm and trained our model by feeding it a dataset, from which it learned and derived inferences to predict intended results. This is what we term as machine learning in its simplest form.