Your starting to use Linux to run SQL Server and you need to automate some tasks, but you don't know how to do this on Linux. In this tip I will introduce you to the Linux Cron utility.

Task scheduling is a key factor for the enterprise. Whether the company is a small, medium or a large enterprise, there are tasks that can't be done during working hours. Even when the company has employees working to provide 24/7 service, it could be the case that there are so many tasks to execute it makes it impossible for employees to be able to run those tasks manually.

Every operating system that I am aware of provides a mechanism to schedule tasks. On Windows it is Task Scheduler, on MacOS it is Launchd and on Linux, UNIX and Solaris it is called Cron.

On Linux and its related OSes (I mean POSIX compatible OSes), Cron is a task scheduler that runs as a daemon in the background. For those of you who don't know, on Linux services are called daemons. Cron gets its name for the Greek God of Time Cronos.

When we are starting out on Linux we may be confused about if the task scheduler is named cron or crontab. This is because when people want to schedule a job they refer to crontab instead of cron. Crontab is short for "Cron Table". It is a file stored in /var/spool/cron/crontabs directory on Ubuntu distributions (other distros may have different locations, like /var/spool/cron/ on RedHat). Did you notice the "s" at the end of the path? That's right, there are more than one crontab files. There could be as many files as users on the Linux system and each file will have the name of the owner/user. Of course, if a specific user has no scheduled tasks there won't be any file with that user name.

The cron daemon is started automatically from /etc/init.d/cron script by entering multiuser runlevels (2, 3, 4 and 5).

The crontab file cannot be modified directly; with the exception of the system-wide crontab file that must be written directly by a user with root privileges. This is a safety measure of Linux to avoid syntax errors in crontab files. Remember in the previous paragraphs I told you that crontab is a file? Well, at this point things start to get complicated. There is also a program named crontab located at /usr/bin/crontab. This program is not a service like cron, it is invoked by the user. What this program does is acts as a wrapper to a text editor and also it is a parser that parses the contents of the crontab file for inconsistencies. I made a flow chart to explain this. Take a look. 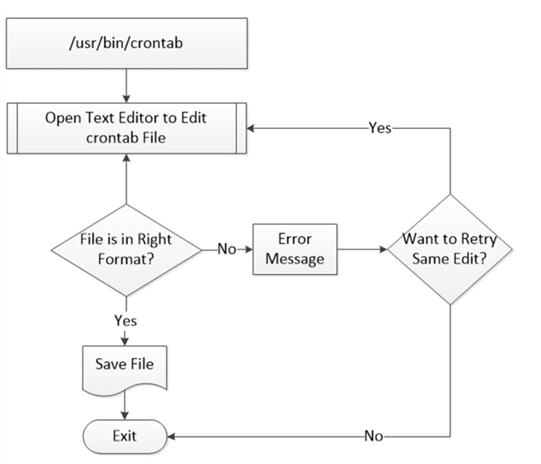 Crontab has its own parameters that I will describe in the next table:

If you edit the crontab file for the first time you will be asked for a text editor as shown in the next image. 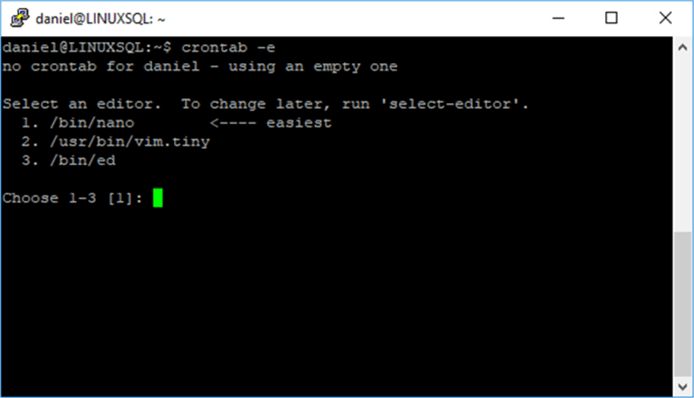 On the previous image you can see the crontab program on its first execution asks you if you want to use nano, vim or ed as the text editor. Also, the message says that if we want to change the editor later we can run the select-editor command.

In my case I choose nano as the default editor. If you make the same selection you will see the default crontab file as shown on the next image. 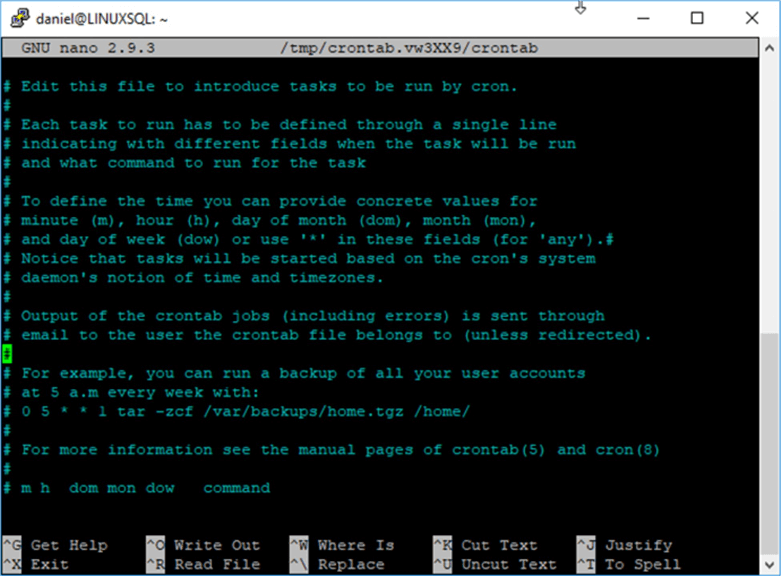 A Crontab file has the following format:

In the next example, I am scheduling the script /home/daniel/script.sh to run every day at 05:00 AM.

In the next example, I am scheduling the script /home/daniel/script.sh to run every day at every hour.

If you want to specify different values for a specific field you can separate each value with a comma (,). In the next example, I am scheduling the script to run at midnight and noon (0,12).

If you couldn't specify the range, you would have to do as follows, which can be a bit tedious.

Also, crontab allows us to define steps by using the "/" character followed by the number of steps. For example, "*/2" skips every two steps. In the next example, I will schedule the script to run every 15 minutes.

Now I will schedule the script to run at midnight every other day.

There are also reserved words that you can use on the crontab file that aid in writing common events in a friendlier way.

In the next example I will schedule the script to run at system start.