You are a SQL Server Database Administrator and you are starting to use SQL Server on Linux. As you have probably found out, there are several administrative tasks that you need to do differently on Linux versus Windows. In this tip I will show you the different ways you can use Bash scripting to display messages and also how to catch user input.

When you want to build a Bash script (or any other kind of script) the first thing you need to know is how the script is going to be used. Without too much thinking we can define two categories of scripts: those that run in the background like Cron jobs and those that require user input, like an installation script.

If your goal is to create a script that runs in the background, you can't catch any user input and must rely on getting everything for your script to work from a configuration file. We will see how to read from files in another tip. Also, you should probably re-think about writing to the console for these background scripts and consider writing to a text file for logging instead.

If your goal is to write an interactive script that can be able to display information and receive user input, then I will show how this can be done in this tip.

When we aim to give some informative message to the console, Bash gives us two tools we can take advantage of. If you have been reading the tips in this series you already know one, which is the echo command. The other one is the printf function. If you ever worked with C or C++ languages you will find this easy. But if you haven't, after reading this tip you will see it is easy to do.

If you have been reading my previous tips in this series you already saw how to use the echo command to display basic output to the console. But this command allows more complex usage depending on which parameter you pass to it.

In the next table I have copied the parameters available from the echo command page.

On the next screen capture you will see the output of that script execution. Notice that the addition of the –n parameter suppressed the new line. 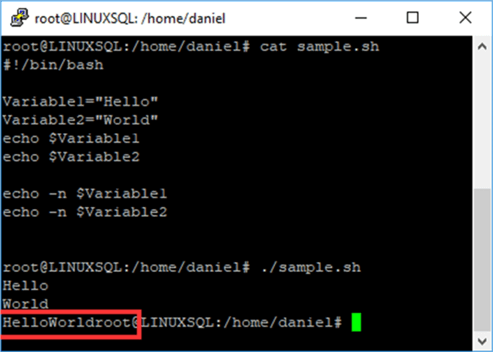 The –e parameter of the echo command allows us with the possibility to change the way we write our messages to the console by using escape sequences. In the next table I wrote a list of each escape sequence and its meaning. All the ASCII codes are expressed in decimal notation.

Now I will give you a few examples using an escape sequence.

In the next script I show you how the \c escape sequence suppresses the output of the text that follows and additionally how to write a vertical tab with the \v escape sequence. 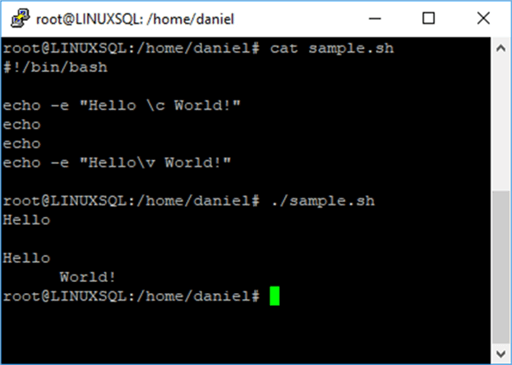 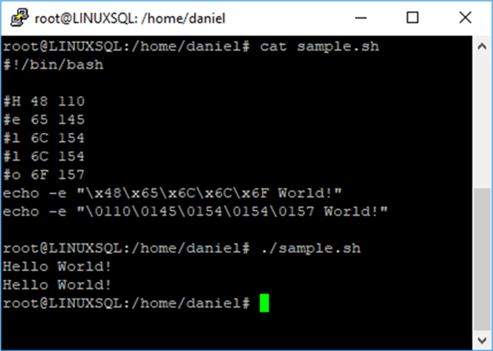 This command is an improved version of echo, because it provides a method for printing formatted text like the C/C++ printf function does.

The syntax of this command is as follows:

In the following script you can take a look at some examples on the usage of the format wildcard.

I will give a few examples showing the usage of printf.

Take a look at the next script when I show you how to format numbers. Notice that I use \n to start the next line in a new line.

On the next image you can see the execution of the previous script. 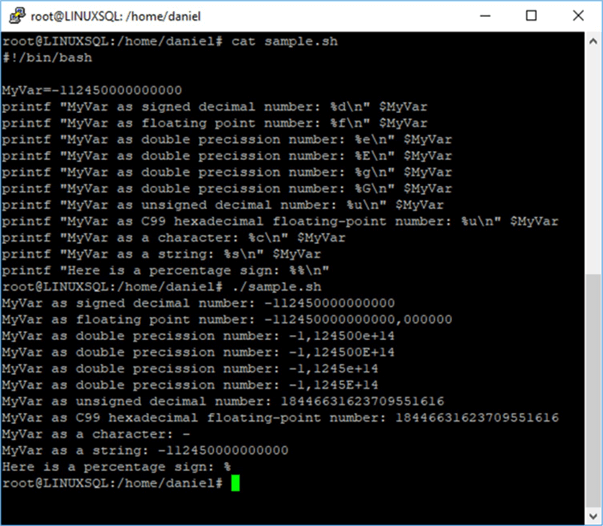 When to use printf instead of echo?

Printf is ideal when you need to display formatted text or a statement composed with many variables.

In order to write an interactive script, the scripting language must give you the possibility to grab user input. Bash is not an exception. It provides us with the read command. This command reads one line from the console (the standard input) or any file descriptor you pass as a parameter. I will cover file descriptors in another tip, but for now think that everything in Linux is a file. Yes, even the console as file which is /dev/tty. As homework, try to write something to that file for example by running the following command.

The read command has the following syntax.

The options are described in the table below. VAR1 … VARN are the destination variables for each word separated by a space character of the line. In case you only use one variable, it will get all the words.

The next script prompts the user for his name and saves it in a variable.

On the next screen capture you will see the execution of the previous script.

In the next example I use the –d option to change the end of line character to ";" instead of the default CRLF.

The next screen capture shows the results of the execution of the previous script.

As you may guess, this is not very useful. It would be awesome if we could parse each data element in an array. The good thing is that we can do that! Take a look at the following script. 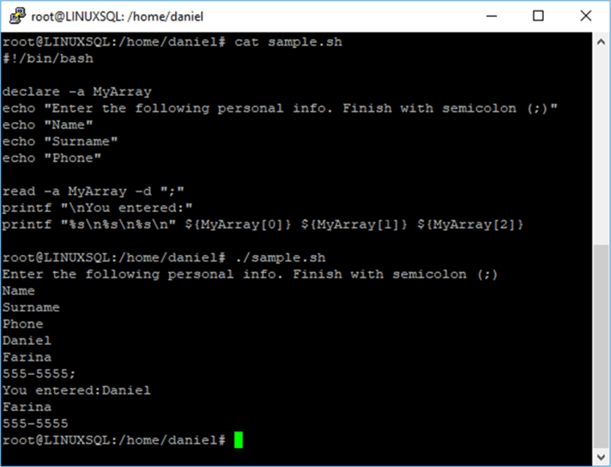