We will continue our tip series on Bash scripting that can be used when working with Linux and SQL Server running on Linux.  In this tip we will cover parameter expansions.

On most of my previous tips about Bash Scripting I was using expansions without let you know. Only in the tip about functions in Bash Scripting I let you know I was using Arithmetic Expansions. Parameter expansions are a very powerful tool in scripting as well as in the day to day bash console usage. By using expansions you can define ranges, create enumerations, concatenate and subtract text data.  Let's learn more about how they can be used.

First I have to clarify that on Linux the term Parameter is used to describe entities that store values like arrays and variables. In other words, a parameter is not limited to the argument of a command and you can refer to a variable as a parameter too even if it is not ever used as part of a command argument.  The reason behind this is that Bash distinguishes between three types of parameters: positional parameters, special parameters, and variables.

These are predefined parameters that have a special meaning for Bash. These parameters are read only so you cannot change them.

This table lists the special parameters and gives a description of each.

On the screen capture below, you will see the result of executing the above script. Notice that in order to show the behavior of the $? expansion I wrote it straight in the shell after running the script. 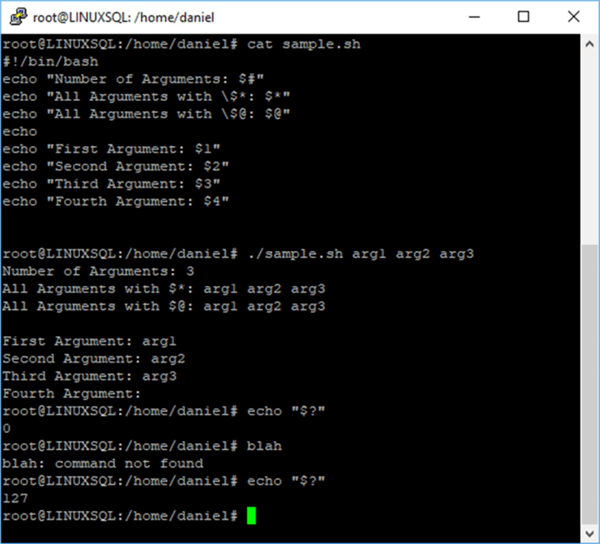 By running echo "$?" I am querying the exit status of the last executed command. In the previous screen capture you can see that echoing the $? expansion after the execution of the script the output is zero which means that the previous command exited with an exit condition equal to zero which is the de facto when there is no errors. Alternatively you can see that when I echo the $? expansion before running a non-existing command I get a nonzero result which indicates that there was an error on the previous command.

Let's consider the next script where I use the $- expansion to display the current option flags, show the current process id with the $$ expansion and also I display the actual script name making use of the $0 expansion. 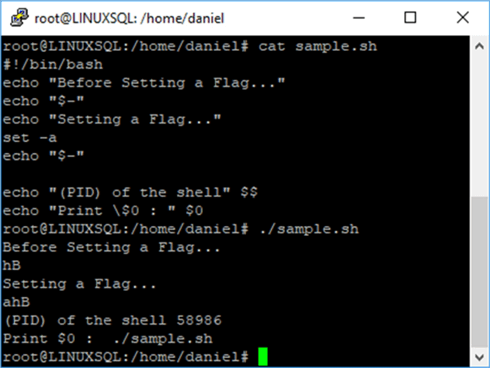 As you can see on the previous image, the result of echoing the $- expansion changes from "hB" after we set the –a flag which is used to export all the variables defined after we set it to "ahB".

We have the chance to use brace expansion to generate a combination of strings, take a look at the following code.

On the previous script you can see that I created a variable "var" with the string "Exp" and I concatenated that variable with a set of two words ("ansion","ense") that allowed me to echo the words "Expansion" and "Expense". Additionally you will see a practical example on how to use it to concatenate a root folder with two subfolders and list the files of those folders. 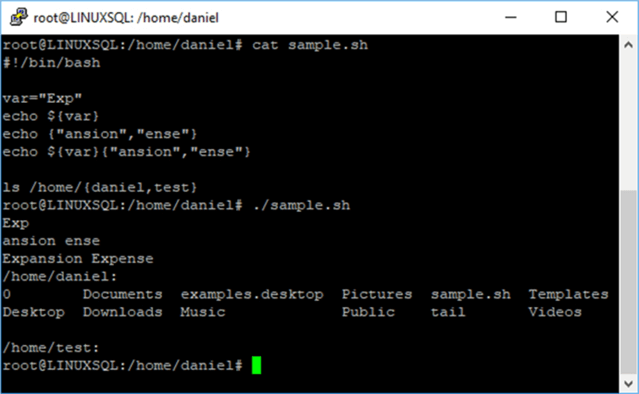 If you remember from my tip about iterative statements on Bash you have already seen how parameter expansions deal with ranges. But if you don't remember don't worry, I will explain it again.

You can define a range as {a..b} where a and b can be either numbers or characters. This is the easiest way to define sets or arrays.

Take a look at the next example when I define a range from "a" to "z" and another from 0 to 9. Additionally I created a For Loop that echoes statements to copy a set of files to show you a case of use of range expansions.

Now I will show you how you can use expanding ranges to print all numbers that can be represented in a byte in hexadecimal format. Additionally the next script shows how to declare an array variable containing a range expansion and how to access a specific item in that array.

The next screen capture shows the execution of the previous script. 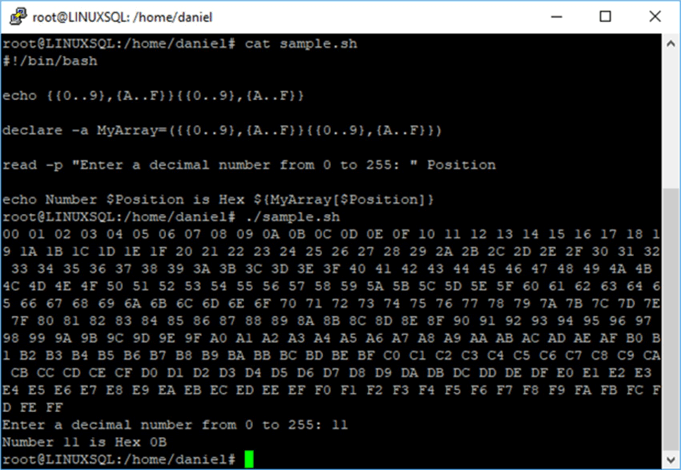 There are operators we can use inside a parameter expansion to change the case of a string variable (scalar or array).

I created the following script to show these expansions in action.

On the next image you can see the execution of the previous script. 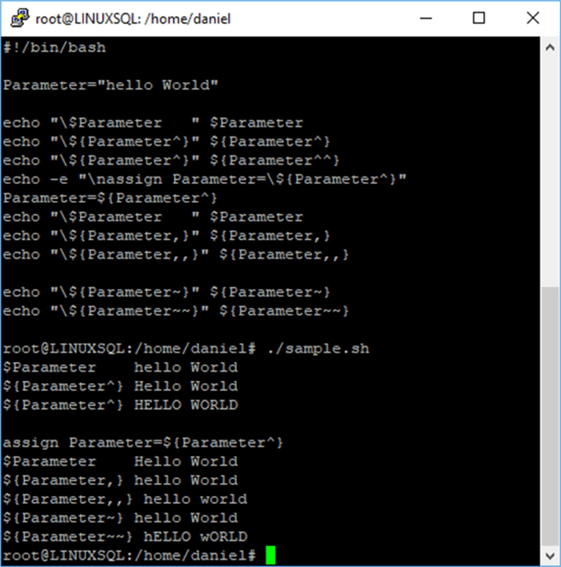 When working with Bash scripts you don't need to use complex functions to deal with strings variables and create substrings. You only need to separate with a colon (:) the offset and the length.

Let's take a look at the next script as an example. 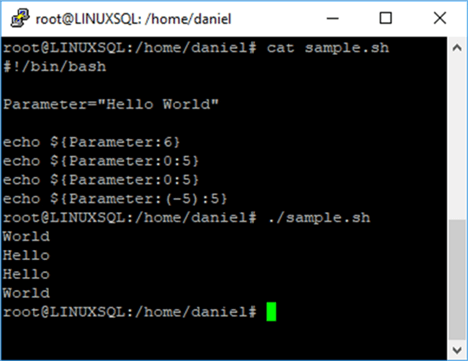 Search and Replace on String Parameters

Something important to remark is that the replacement won't change the value of the parameter. The expansions never change the parameter itself, they only change the way it is being returned or showed.

In case you want to search and replace all the occurrences of a pattern you must use a double slash (//) at the end of the parameter.

The next script shows an example on those concepts. 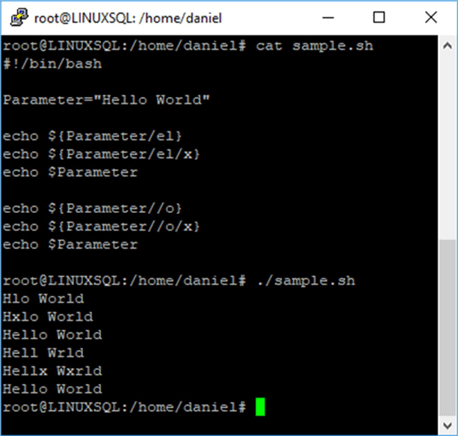 There are also parameter expansions that allow us to remove the starting part (suffix) or the bottom part (prefix) of a string parameter according to a given pattern. It is like the LEFT and RIGHT functions in SQL Server. This is useful for example when you need to change the extension of a file.

The next script illustrates the usage of those expansions.

On the following screen capture you can see the execution results of the previous script. 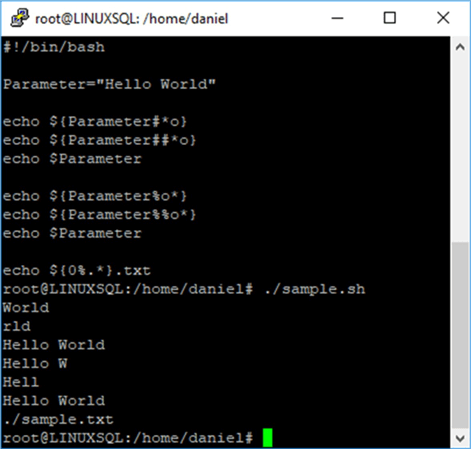 String Length of a Parameter

If you need to count the length of a string parameter you can use the following expansion using the # sign in front of the parameter. This expansion is very useful when you are using the ":" expansion to handle substrings.

Take a look at the next script when I show you how to count the number of characters in a parameter.

On the following screen capture you can see the results of the execution of the previous script. 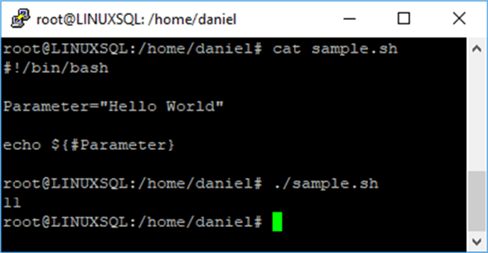