If you are going to be using SQL Server on Linux then it would be helpful to understand how to write bash scripts.  In this tip I will cover the basics of iterative statements which is part of a series of tips about bash scripting.

With Bash scripts you can create complex solutions. That makes the need of iterative statements a must. For example, if you want to read and process each line of a file, you will have to use an iterative statement. For those who don't know what an iterative statement is, we can think on it as repeatedly executing a portion of code, known as the loop body, until a controlling expression (or condition) reaches a specific value.

Now I will describe each of these statements and differences.

This statement is present in all computer languages. Of course, each language has its own implementation, but the basic idea is still the same. The For Loop repeats the execution of a group of statements over a set of items. Those items can be a sequence of numbers or text strings like the name of files in a directory.

The basic syntax of the For Loop in Bash Scripting is as follows:

Now I will show you different examples of the For Loop. Let's consider the next case when the For Loop contains a sequence of numbers in the iteration array.

On the previous script there are two For Loop statements. The first, loops through a set composed of the succession of the numbers 1 to 5. The other For Loop, does this with a set of nonconsecutive numbers. Notice that since we are defining a set, we need to use curly brackets.

The next screen capture shows the output of the execution. 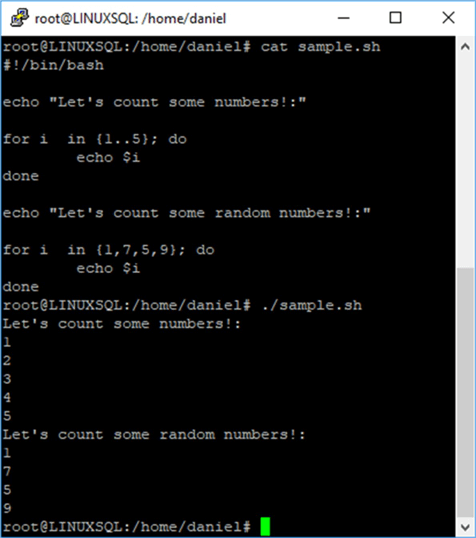 Let's take into consideration the following script when the iteration array is the execution result of a command, which in this case is the sqlcmd command to list the name of the databases in our instance.

Notice that since we are executing a command to get the iteration array, we need to use the dollar sign and the command enclosed with parenthesis instead of curly brackets like in the previous example.

If you want to use the result of a SQL statement executed with sqlcmd as the source for the iterations, be aware that by default when you execute any SQL statement in sqlcmd the result includes the header and the row count. To avoid that I included "set nocount on" which disables the output of the row count. Also, I used the –h parameter that manages how many rows will be written until the headers are reprinted. This parameter requires that you specify before it the number of rows written until the headers are reprinted, but you can also specify -1 (minus one) which is equivalent to disabling the headers. 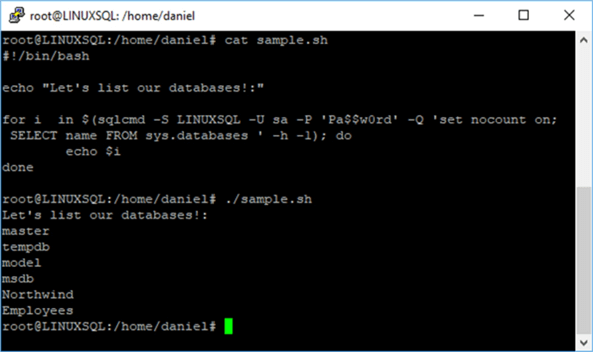 Here is the basic syntax of the While Loop:

Now I will show you a few examples on how to use the While Loop.

In the next example I will show you a countdown from 5 to zero by using an endless loop with a break statement. Notice that I have to add an IF statement in order to check the value of the variable.

The next screen capture shows the execution of the previous script. 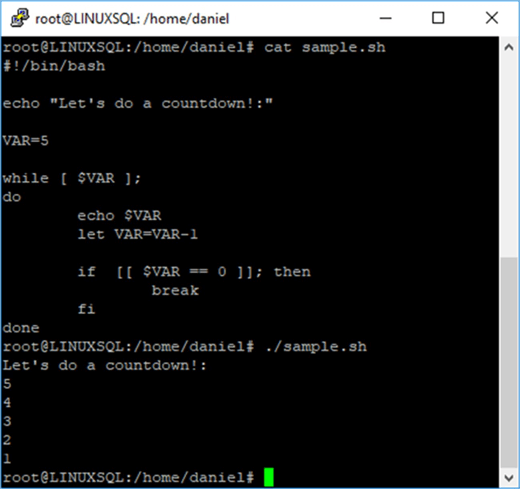 Of course, there is another way that requires less code and is easier to debug, because we get rid of the IF statement and perform the evaluation in the control condition of the While Loop. Take a loop at the next script. 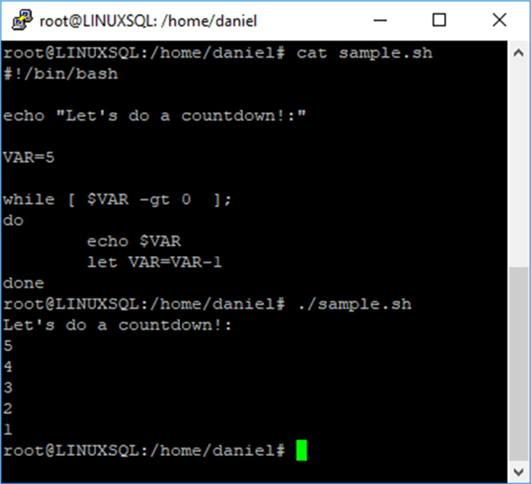 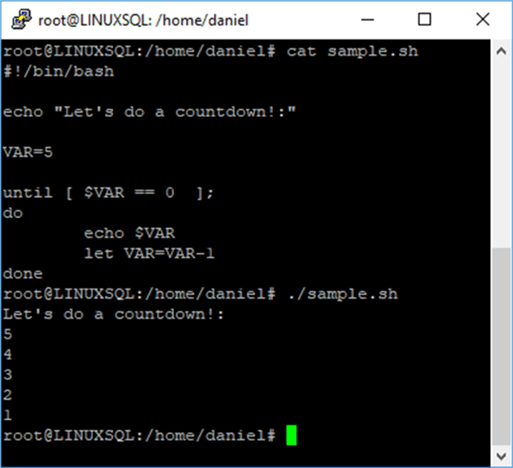 How to Uninstall SQL Server vNext from a Linux Server