Since SQL Server now runs on Linux, it would be helpful to understand how to write Linux scripts to help administer SQL Server, similar to what you do with Windows batch scripts.  In this tip we cover how to use conditional logic in the scripts.

A conditional statement, usually referred as an if..then statement, is a feature of programming languages that performs an evaluation of one or more conditions and according to the evaluation follows a specific execution flow. The conditions are evaluated as true or false. In other words, If conditions are true then some action(s) is (are) executed.

This construct allows us to take a different course of action when some conditions are met in our script. The basic syntax of the If..Then construct is as follows:

But things are not that easy when you face it for the first time. For example, consider the following code which is a perfectly valid script and sample.sh is the file name of the script:

If you never worked with a bash script, or even if you have worked as a programmer I am sure that the conditional expression of the previous script "-e sample.sh ” is something disturbing. In order to understand this; think that the content between brackets is an expression to be tested, in this case the existence of a file named sample.sh. There is a command on Linux named "test”. Long story short, Bash treats the content between brackets as the arguments of the test command (if you want a more detailed explanation which is far from the scope of this tip, you should take a look at the previous link which I am repeating here http://mywiki.wooledge.org/BashFAQ/031).

In other words, "[[ -e sample.sh ]]” is like executing "test -e sample.sh”. But if you run the test command you won't see any result unless you run the "echo $?” command which is used to display the exit status of the command previously executed.

Let's consider the following example when I run the test command with a simple numeric comparison.

On the next screen capture you will see the output of the execution of the previous code.

Now let's change the "test” to double square brackets and see what happens:

As you can see on the previous screen capture the results are identical.

In the next example, we will test a given file and return a message telling if the file is a block device, a character device or a normal file.

The next screen capture shows the execution of the previous script entering a character device (/dev/tty, the console); a block device (/dev/sda, the hard disk) and a regular file. 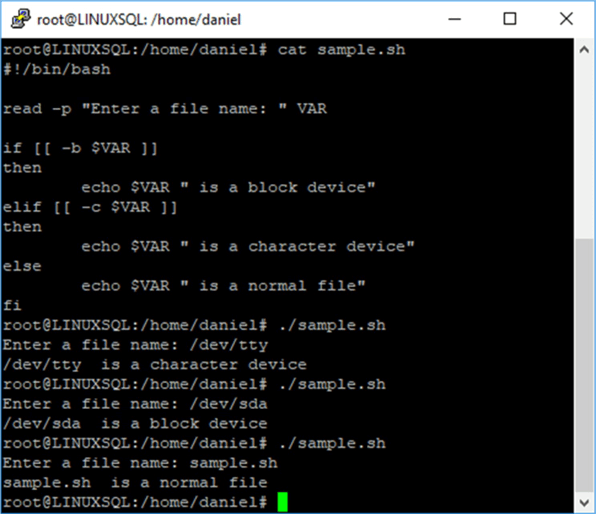 The syntax of the Case statement is as follows:

The Case statement executes one or several groups of statements, depending on the evaluation of a given <Expression> over a set of cases (case_1..case_n). The expression can be an integer or a string. As a consequence, case_1..case_n can also be either an integer or a string. If you need to run a group of statements for different case values of a given <Expression>, you can separate each value with a vertical bar – i.e "case_1|case_2)”-. Additionally you can include a group of statements to be executed when <Expression> does not match with any of the evaluation cases by using an asterisk – i.e. "*)”-.

The next script shows an example on how to use the case statement with string patterns.

On the next screen capture you can see the result of the previous script execution. 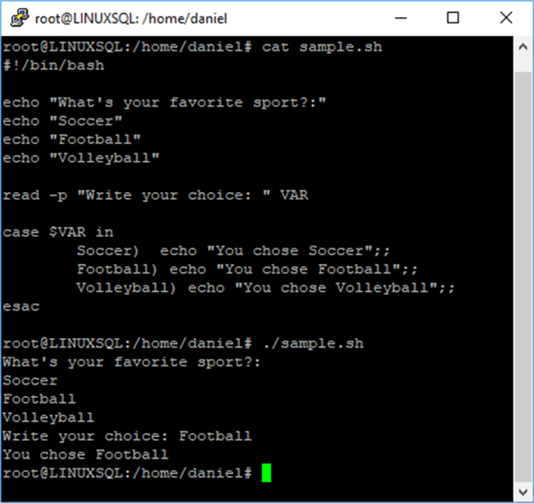 The next script is equivalent to the previous one with the sole difference that it uses a numeric pattern instead of a string.

On the next screen capture you can see the result of the previous script execution. 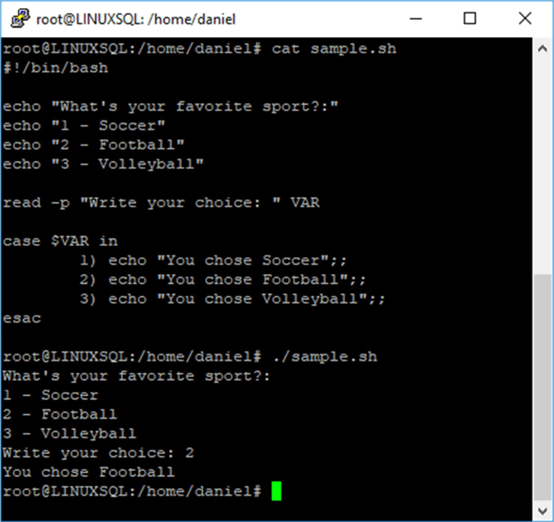 Let's see an example of a case statement in which the case expression evaluation for two different case values executes the same section of code.

On the next screen capture you can see the output of its execution. 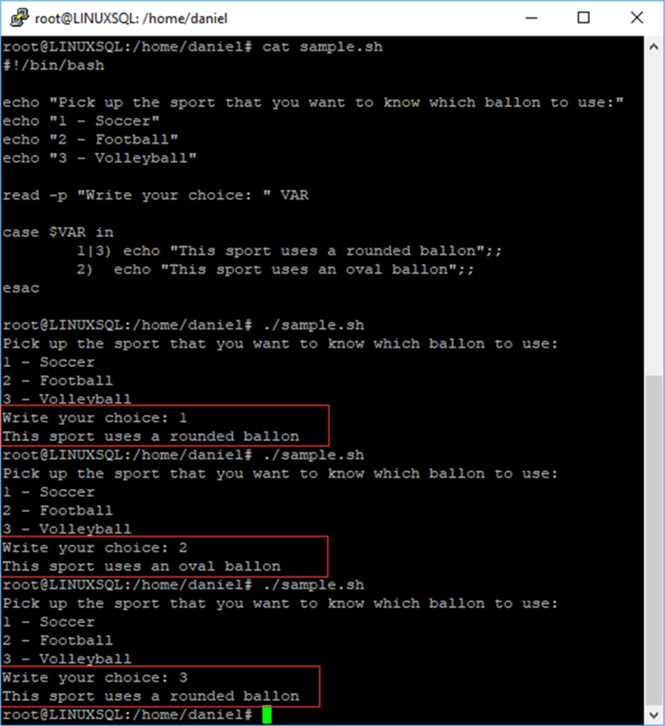