Our company has started evaluating Containers to modernize our SQL Server databases. I have deployed SQL Server 2017 RTM on Linux for our development environments and would like to get it updated. How do I update my SQL Server 2017 on Linux containers?

The Ephemeral and Immutable Nature of Containers

Containers were designed to be disposable – here today and gone tomorrow. That’s because they were first used in development and test environments where developers can write and test their code without having to wait for ages just for a server. They are short-lived, which is the opposite of how we dealt with servers in the past.  We keep our servers as long as we can, installing updates or moving them around to keep them up and running. It’s one of the reasons why we have so much unstable environments – we don’t know exactly how long they have existed or if there are unnecessary components in them that affect the stability of the platform.

Containers were also designed to be immutable – they never change. The images you created as the basis for your containers look exactly the same since the day they were made. Should you decide to make changes to the application inside a container, you don’t go around adding files or installing updates on the running container. You create a new image that contains all of the changes you need using the steps outlined in this tip. You then deploy a new container based on this newly created image.

This is the reason why Docker volumes were used for SQL Server in this tip. Because we need to update our SQL Server instances and we don’t want to lose our data when we replace our existing containers with updated ones.

You can create your own custom SQL Server 2017 with CU 18 on Linux Docker image by following the steps outlined in this tip. Or if your container is based on an image from the Microsoft Container Registry, you can run the command below to pull an existing image.

The reason you are only doing this step after having the SQL Server 2017 with CU 18 on Linux Docker image available is because you don’t want to introduce unnecessary downtime. You might be wondering if doing this makes sense given that this is just for a development environment. You want to develop the habits that can help you further along in your career as a DBA. One of them is always thinking about high availability and disaster recovery. You then decide based on the criticality of the environment and the databases you are dealing with. 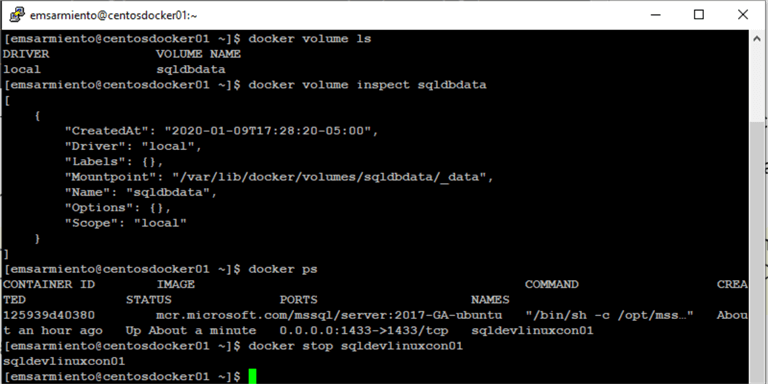 Step #3: Create and start a new container based on the SQL Server 2017 with CU 18 on Linux Docker image

Run the command below to create and start a new container with a new name – sqldevlinuxcon02 - based on the SQL Server 2017 with CU 18 on Linux Docker image.

There are a couple of things to consider in the command:

The results of the docker ps command is a bit misleading. Just because the container is up and running doesn’t mean that your SQL Server instance is already available. That’s because the container is performing an update, just like when you’re manually installing a CU.  You can look at the SQL Server error logs to monitor the update process by running the command below. 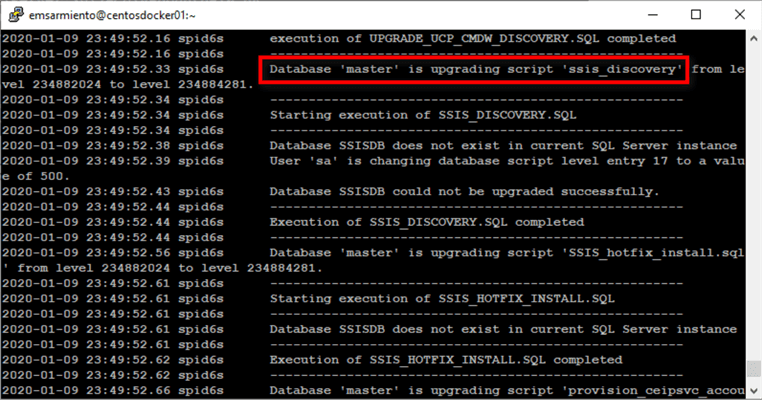 Once the update completes, you can verify the version number and the status of the databases.