I recently wrote about getting Docker and Azure SQL Edge up and running on the new MacBook Pro M1, and promised I would follow up with performance testing and comparisons. More specifically, I wanted to see if, with the same docker configuration on different platforms, the platform itself is giving you exaggerated performance in either direction.

To start, we need to set up Docker. As I mentioned last time, the download page for Docker Desktop offers packages for both Intel and M1, so choose appropriately:

Once Docker is up and running, I wanted to change the memory configuration, because the defaults are low (2 GB). Anthony Nocentino reminded me that SQL Server inside Docker will only see ~80% of the allocated memory so, by default, you'll see this in the errorlog when a SQL Server container starts up, regardless of how much memory the host machine has available:

A gig and a half of memory is probably not the best configuration if you're testing anything of any substance at all, unless you really want to test your disks (I am much more interested in CPU, especially in this case). You can easily change this by going to Docker preferences, Resources, Advanced, and increasing Memory; this is useful for making sure that your containers have enough memory and also that multiple containers get along effectively: 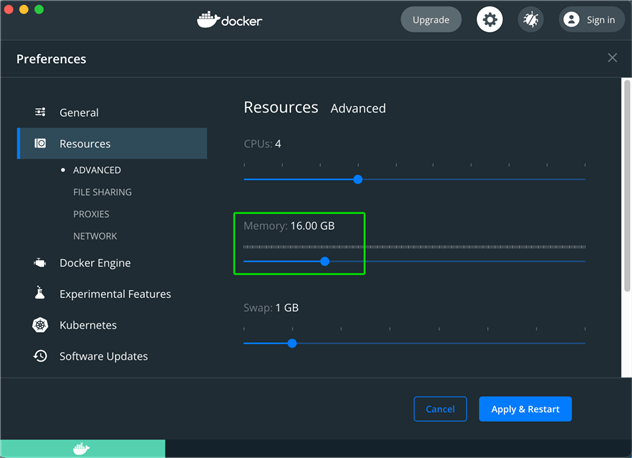 (Note that this will require a Docker restart, so be aware if you have other containers that you expect to keep running.)

Because I can only run Azure SQL Edge on my M1 MacBook, I’m going to pull that image on both machines:

Now I can run a container with that image, running SQL Server on port 5001, and specifying 4 CPUs and 16 GB of memory:

If you check the logs, you’ll see that SQL Server is able to use just under 13 GB:

Buried in the verbose output you should find something like this:

Success looks something like this, including the output that shows the randomly generated container ID:

Next, we can open Azure Data Studio, and test our connections. On both machines, the initial connection looks like this (though the computer name will vary; it will be the first 12 characters of the container ID):

Then we can open a new query and confirm SQL Server is configured correctly:

Results on the Intel MacBook: 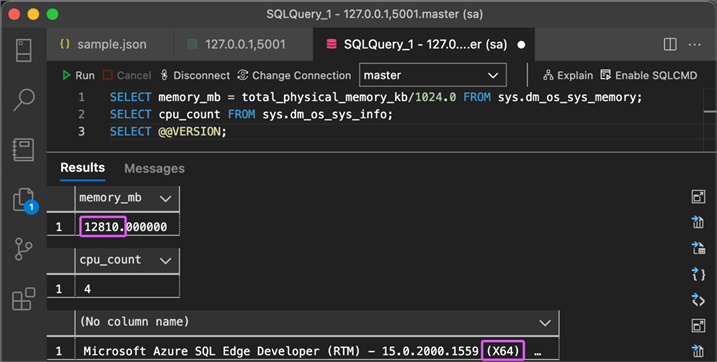 Results on the M1 MacBook: 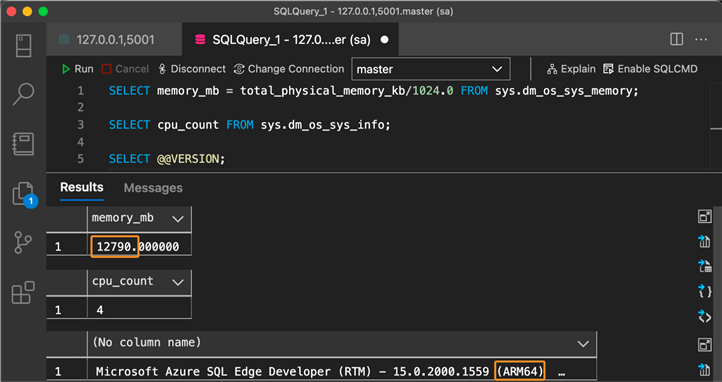 Then we can restore AdventureWorksLT2019 with the following command (and we’ll turn Query Store on for both machines, just in case we want to look at those metrics later):

To reiterate, I wanted to compare CPU performance of a similar workload between the M1 and Intel Macs, with as many things being equal as possible. The two machines are configured as identically as possible (though the M1 has 10 cores instead of 8, and the memory is DDR5):

All I needed was a CPU-heavy workload and something to drive it. I thought the best way to test this would be using SqlQueryStress, a long-standing and flexible workload generation tool actively maintained by Erik Ejlskov Jensen. However, it’s a Windows application – even the command line components have a WinForms dependency. While I do have Windows VMs and physical machines around, I didn't want to introduce network latency as an additional variable. I reached out to Erik, who very quickly churned out a cleaner command line version called sqlstresscmd.

Then I added a symbolic link for dotnet in my bin folder, so I could always call it without worrying about where it lives:

I’ll need to call dotnet to install the cross-platform version of sqlstresscmd:

This put sqlstresscmd in /Users/aaronbertrand/.dotnet/tools/, so I made another symbolic link:

Then I downloaded the sample settings file and made some changes locally (only showing the lines I changed):

I put this file into ~/Documents/, so I made one more symbolic link:

Now with these symbolic links in place, I could simply say:

Proof that it works on both machines (this is not a performance test):

I mentioned to Erik that I’d love to see slightly prettier output, and he delivered immediately. You can update to the newest version as simply as you installed (you may need sudo):

The result of the update command:

And now the output is both less verbose and more readable:

Now, let’s make these CPUs earn their caviar and champagne prices, shall we? I created this completely ridiculous stored procedure that does most of its work in a single sort operation, but should have plenty of additional impact on CPU:

I created a new .json file called MakeSomeNoise.json, with the following content:

These screen shots aren’t doctored, per se, but I did use Photoshop to take away small details like the Start time (hopefully I cobbled it back together convincingly): 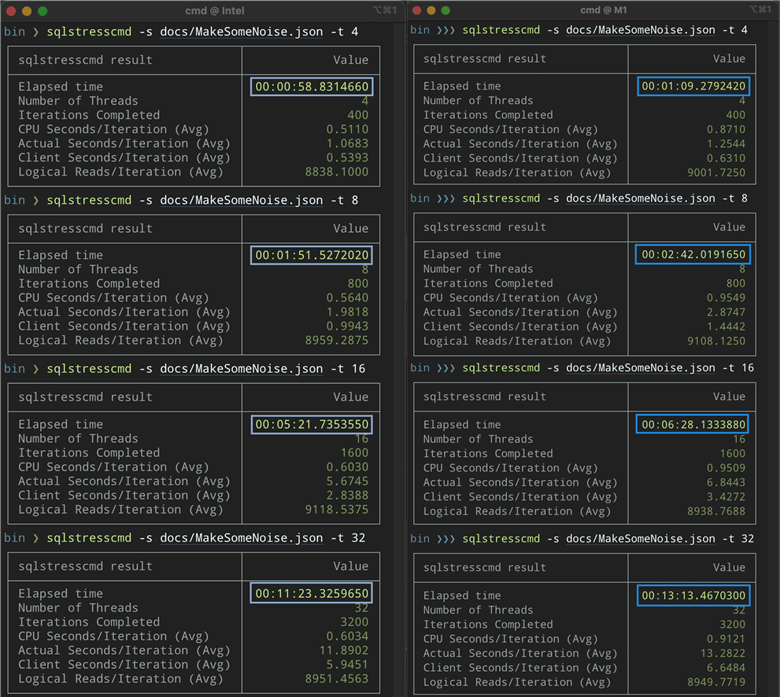 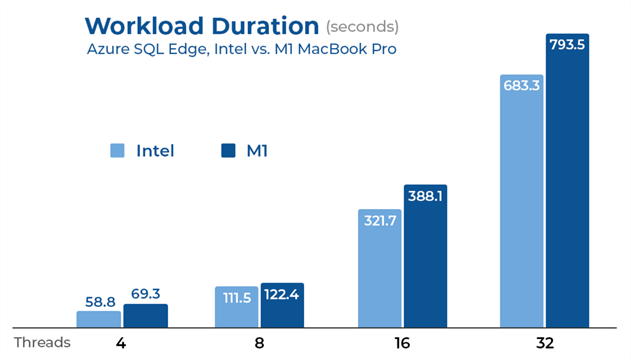 While I tried to make everything as equal as possible, the M1 machine consistently ran slightly longer (the first test of any kind where the newer machine didn’t come out on top). Perhaps that is because somewhere in this specific stack there is something that hasn’t been optimized for Apple silicon. Or maybe it is just that the M1 doesn’t let a process run the machine into the ground – one subjectively better thing is that the fan didn’t kick in at all, but on the Intel Mac, they were screaming throughout these tests. I’m not exaggerating – the M1 was completely silent, while I was afraid to touch the Intel to anger it further.

I would love to understand this discrepancy better, but I should probably start by making a more realistic, mixed workload, and try it from different tools or scripts, maybe remotely, which introduces network but removes potentially conflicting local resources. I don’t like the feeling in the pit of my stomach that this much-heralded-as-superior machine is inferior at one of the things I’d like to use it for, but I must remember all the other things it’s great at (including, quite noticeably in this case, being quiet). In the meantime, having a local and familiar stress-testing application is still a great tool to have in your toolbelt, regardless of what type of computer you use or whether its results don’t line up precisely to other machines. And I have plenty of other tests planned before I feel too gloomy about the M1; this was just to lay the groundwork.

See these tips and other resources: