Graph Technology enables users to store, manage, and query data in the form of a graph in which entities become vertices and relationships become edges. Graph Analytics enables the capabilities for analyzing deeply grained relationships through queries and algorithms. While many organizations and developers are leveraging graph databases, how can they get started with Graph Analytics by leveraging Apache Spark's GraphFrame API for Big Data graph analysis?

Apache Spark's GraphFrame API is an Apache Spark package that provides data-frame based graphs through high level APIs in Java, Python, and Scala and includes extended functionality for motif finding, data frame based serialization and highly expressive graph queries. With GraphFrames, you can easily search for patterns within graphs, find important vertices, and more.

In this article, we will explore a practical example of using the GraphFrame API by

Before we get started with the demo, lets quickly review some basic graph terminology: 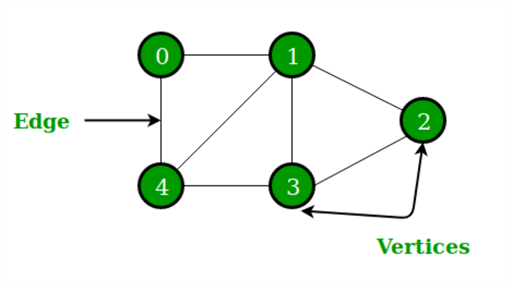 A graph is a set of points, called nodes or vertices, which are interconnected by a set of lines called edges. 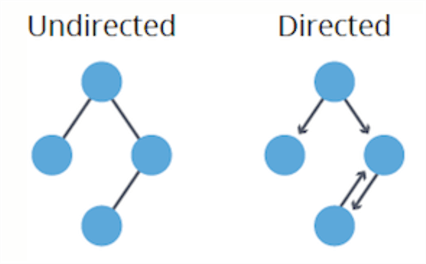 Directed graphs have edges with direction. The edges indicate a one-way relationship, in that each edge can only be traversed in a single direction. A common directed graph is a genealogical tree, which maps the relationship between parents and children.

Undirected graphs have edges with no direction. The edges indicate a two-way relationship, in that each edge can be traversed in both directions. A common undirected graph is the topology of connections in a computer network. The graph is undirected because we can assume that if one device is connected to another, then the second one is also connected to the first:

Now that we have a basic understanding of Graphs, let's get started with demonstrating Graph Analytics using the Apache Spark GraphFrame API.

For this demonstration, I have chosen to utilize a Databricks Notebook for running my Graph Analytics, however, I could have just as easily used a Synapse Workspace Notebook, by adding and configuring an Apache Spark job definition in Synapse Analytics and adding the GraphFrame API JAR file to the Spark definition.

A complete list of compatible GraphFrame version releases can be found here. For this demo, I have used a JAR file for Release Version: 0.8.1-spark2.4-s_2.12 and installed it within the Library of a Standard Cluster. 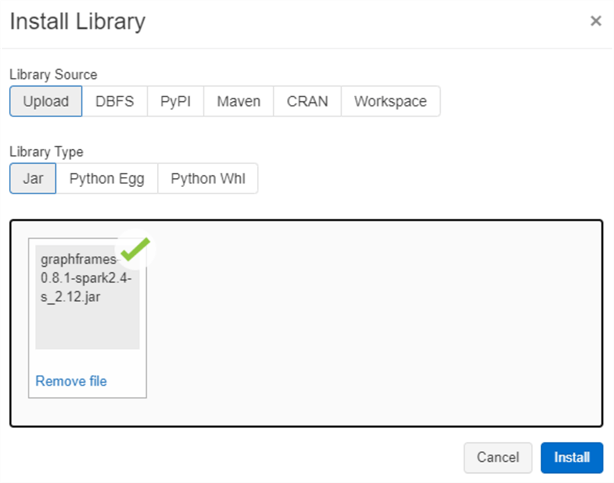 Once the installation is complete, we can see that the JAR is installed on the cluster which will be used to run the Notebook code in the subsequent sections.

Now that we have the GrapFrameAPI JAR and Cluster ready, lets upload some data via DBFS. For this demo, I will use Chicago CTA Station Data along with Trip Data.

I am creating the station_data table using the UI. 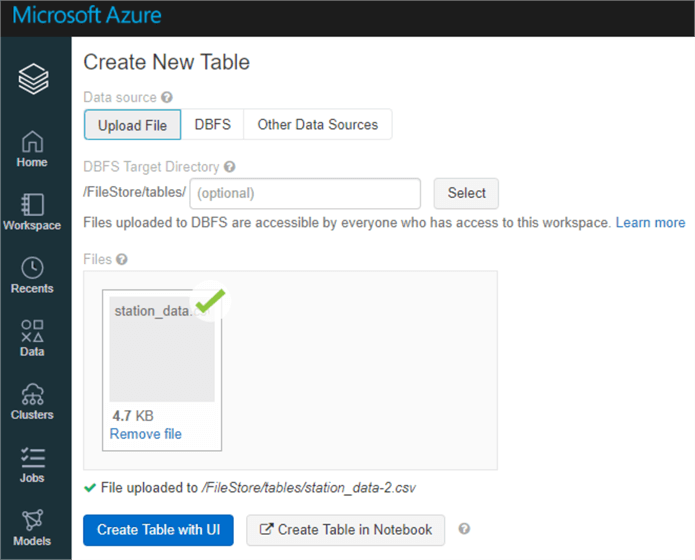 Validate the schema, ensure that 'first row has headers' is checked and create the table. 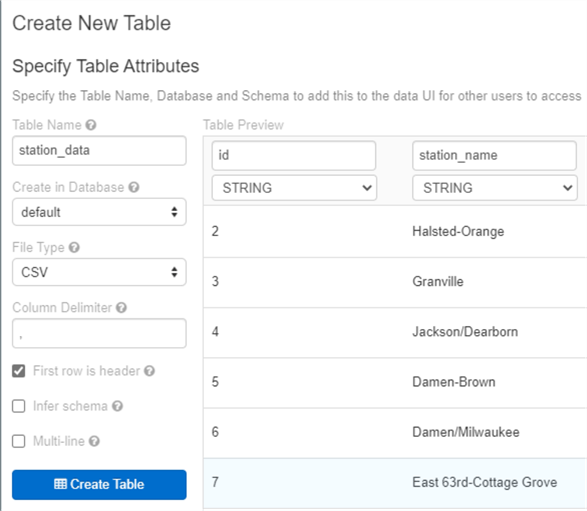 Follow the same process for the trip_data and create the table using the UI. 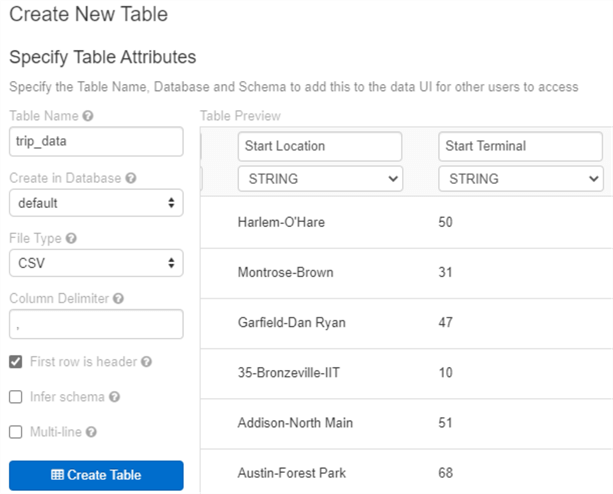 Once the tables are created, they will both appear in the tables section. 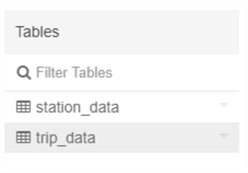 Load Data in a Databricks Notebooks

Now that we have created the data tables, let's run the following python code to load the data into two dataframes.

Build a Graph with Vertices and Edges

Now that the data is loaded into dataframes, let's define the edges and vertices with the following code. Since we are creating a directed graph, we will define the trips' beginning and end locations.

Next, we can run the following code to build a GraphFrame object which will represent our graph using the edge and vertex dataframes we defined earlier. We will also cache the data for quicker access later.

Next, lets run a few basic count queries to determine how much data we are working with.

As we can see, there are around 354K trips spanning 71 stations.

We can run additional queries such as the one below to determine which source and destination had the highest number of trips. 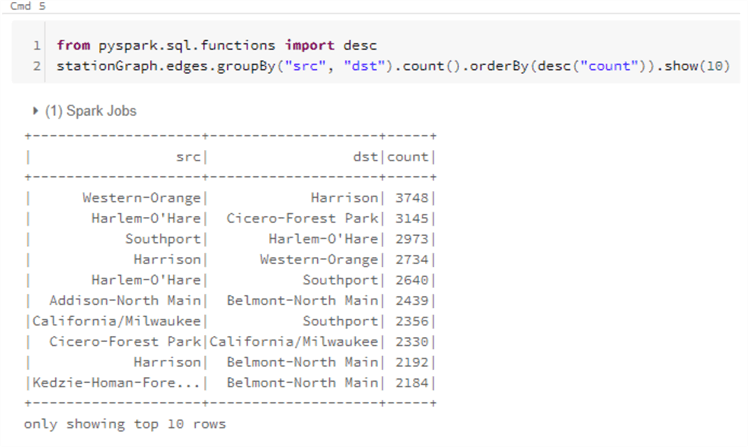 Similarly, we can also run the following query to find the number of trips in and out of a particular station. 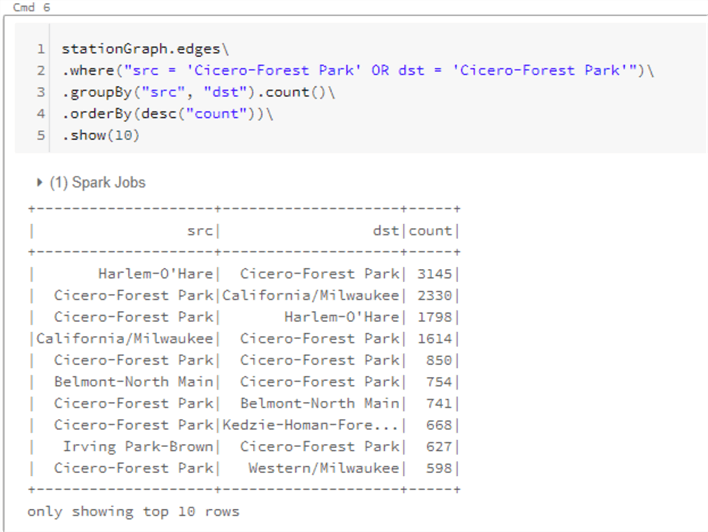 Now that we have run a few basic queries on our Graph data, let's get a little more advanced by finding patterns with something called Motifs which are a way of expressing structural patterns in a graph and querying for patterns in the data instead of actual data. For example, if we are interested in finding all trips in our dataset that form a triangle between three stations, we would use the following "(a)-[ab]->(b); (b)-[bc]->(c); (c)-[ca]->(a)". Basically (a), (b), and (c) represent my vertices and [ab], [bc], [ca] represent my edges that are excluded from the query by using the following operators as an example: (a)-[ab]->(b). 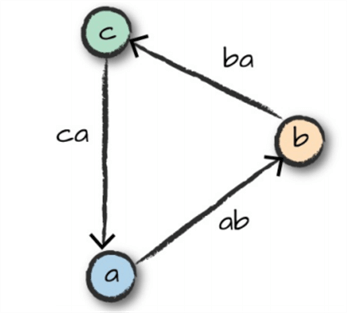 A motif query can be run using custom pattern like the following code block.

Once the motif is added to a dataframe, it can be used in a query as below, for example, to find the shortest time from station (a) to (b) to (c) back to (a) by leveraging the timestamps. 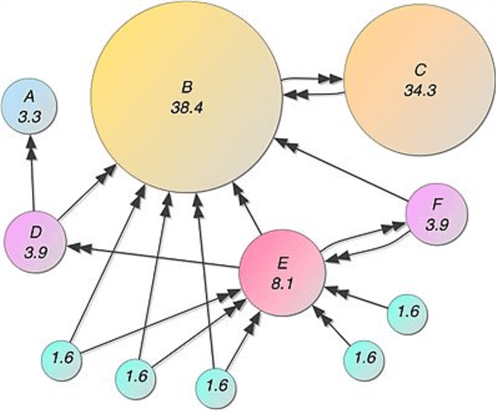 The GraphFrames API also leverages graph theory and algorithms to analyze the data. Page Rank is one such graph algorithm which works by counting the number and quality of links to a page to determine a rough estimate of how important the website is. The underlying assumption is that more important websites are likely to receive more links from other websites.

The concept of PageRank can be applied to our data to get an understanding of train stations that receive a lot of bike traffic. In this example, important stations will be assigned large PageRank values:

Measuring and counting trips in and out of stations might be a necessary task and we can use a metric called in-degree and out-degree for this task. This may be more applicable in the context of social networking where we can find people with more followers (in-degree) than people whom they follow (out-degree). 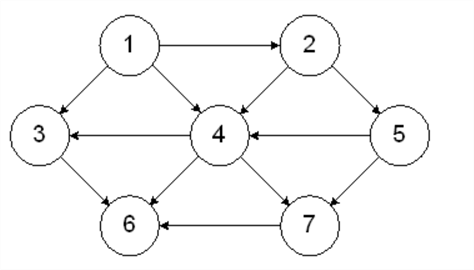 With GraphFrames, we can run the following query to find the in-degrees. 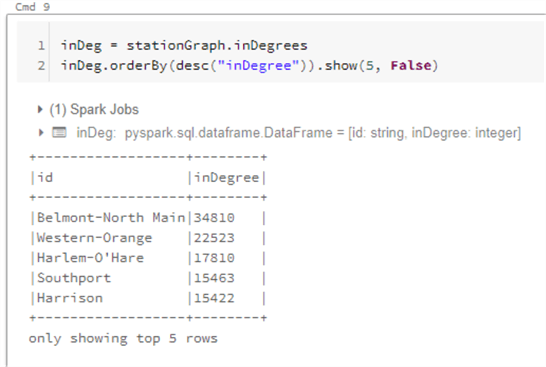 Similarly, we can run the following code to find the out-Degrees. 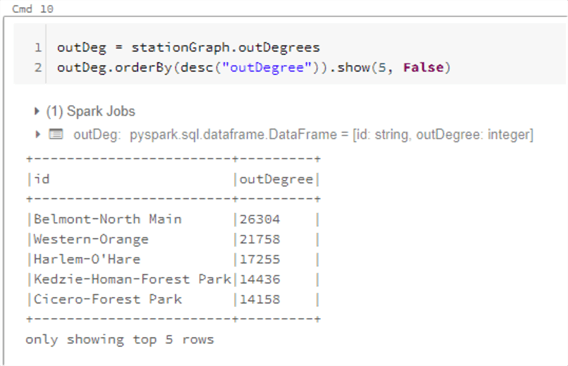 Finally, we can run the following code to find the ratio between in and out degrees. A higher ratio value will tell us where many trips end (but rarely begin), while a lower value tells us where trips often begin (but infrequently end). 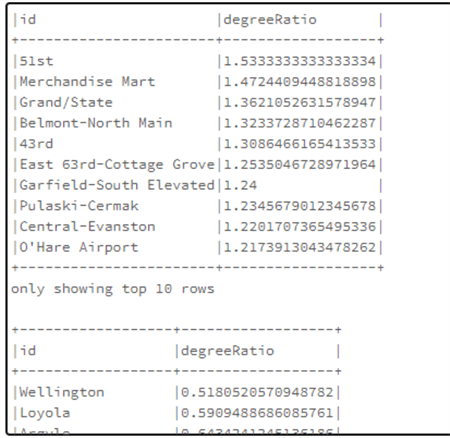 Breadth-first search can be used to connect two sets of nodes, based on the edges in the graph to find the shortest paths to different stations. With maxPathLength, we can specify the max number of edges to connect with specifying an edgeFilter to filter out edges that do not meet a specific requirement.

A connected component defines an (undirected) subgraph that has connections to itself but does not connect to the greater graph.

The following code will give us the connected components. 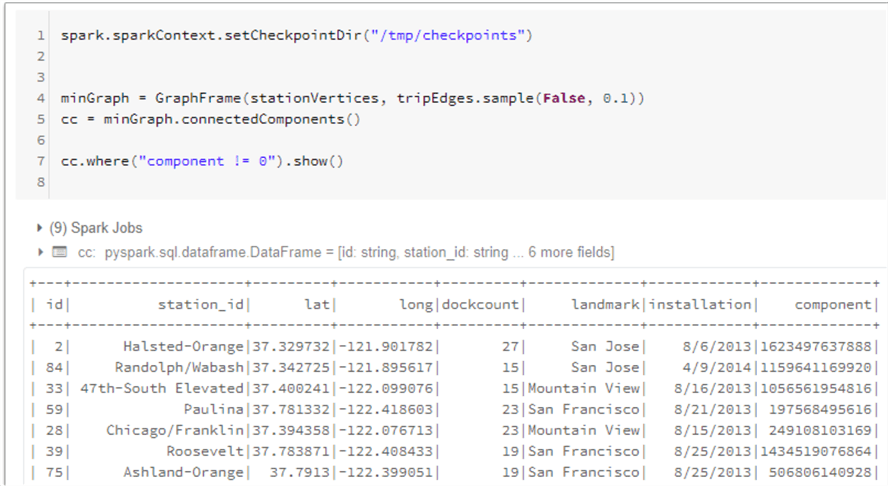 Additionally, we can also find strongly connected components with the following code.

Ron L'Esteve is a seasoned Data Architect who holds an MBA and MSF. Ron has over 15 years of consulting experience with Microsoft Business Intelligence, data engineering, emerging cloud and big data technologies.