Python Iterable vs Iterator vs Generator with Sample Code

Python is a powerful scripting language used for classic programming, scripting, and data analytics. So far in our Python programming series we have examined multiple concepts and constructs such as data types, functions, and control flow tools. In all these tutorials we have mentioned at least once the core terms "iterable", "iterator" and "generator". What are these objects, how to distinguish them from each other and how to benefit from them?

Follow along this tutorial to examine the similarities and differences between an iterable, an iterator and a generator. Behind these core Python terms you will find objects with bespoke functionalities and methods. Knowing how to handle them will enable you to take full advantage of the Python language. Let us begin.

An iterable is best described as a sequence of items. The sequence can be anything: a list, a tuple, a string, a file or generally any data structure whose elements can be iterated over, i.e., extracted, or accessed one by one. The following characteristics apply to all iterables:

They can be looped over, i.e., used in a for loop. For example, a set:

Every iterable has a built-in __iter__ method. The quickest way to check if an object is an iterable is to call the dir function on it and check if it implements it:

In a previous tip, we have examined the iter() general function which calls the __iter__ method of the argument object thus turning an iterable into an iterator.

The elements inside the iterable can be accessed one by one with an index:

An iterator is the resulting object of calling the __iter__ method of an iterable. The core functionality of an iterator is that it keeps track of the next element in the sequence. Thus, the iterator is a stateful object that can serve its elements one at a time. It "knows" which sequence element is coming up next.

An iterator has a built-in method __next__. In a previous tip, we examined also the next() general function which calls the internal __next__ method of the iterator argument object. If we turn a set object which by default is an iterable, into an iterator we will see __next__:

By default, an iterable object is not an iterator. Therefore, trying to use the next() general function will result in an error because the object does not implement __next__ internally:

To turn an iterable into an iterator it is enough to use the iter() function with this syntax: 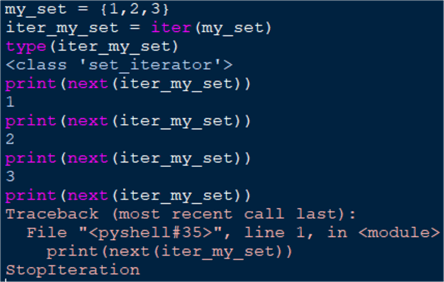 After declaring the iterator iter_my_set based on the set iterable, we can access its elements one after the other with next(). The next() method though will raise the StopIteration exception when the iterator has been emptied. It is important to note that iterators can neither serve the elements they contain in reverse, nor skip elements nor be restarted. Once all elements have been served from an iterator, you must create another (or reinitialize the variable), otherwise you will get the StopIteration exception.

Calling manually the next method is, in a way, emulating the behavior of a for loop. The next example shows an approximate representation what happens behind the scenes in every for loop you use. 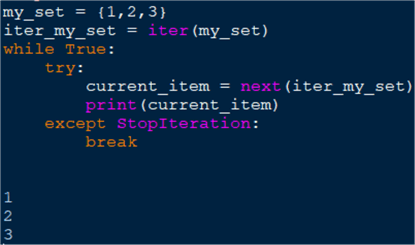 In fact, this is an added benefit of the iterators: if you cannot or do not want to use a for loop you can turn your iterable into an iterator and process it manually as shown in the example above.

In many contexts, the terms "iterable" and "iterator" can be used interchangeably. For the purposes of explaining what they do we distinguish them in the sense that an iterable implements __iter__ but not __next__ and an iterator implements both __iter__ and __next__.

Before examining generators, let us first investigate the relationship between iterators and generators. To do so, I will import some modules which will allow me to compare the different types and the hierarchical relationship among them: 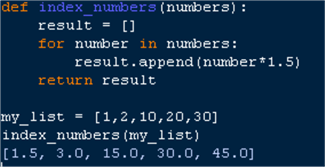 This regular function can be converted to a generator function by using the yield keyword:

When we call this new function the output is a generator object – not a list of indexed numbers anymore. The reason you see this and not any readable output is that the generator does not produce the whole result all at once. In contrast, the generator "yields" the results one at a time. 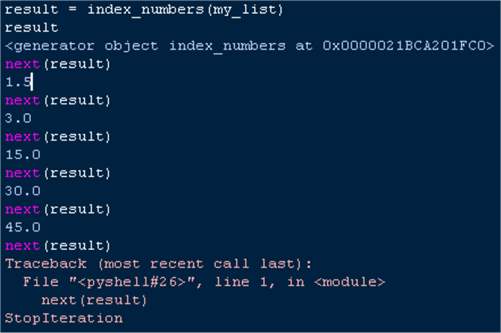 One benefit of using a generator function is the added readability and conciseness. With the generator we have reduced the number of lines twice – from 4 in the former example to 2 in the latter.

In the following table, we propose a summary of the comparison between the three objects:

Finally, let us wrap it up by taking a closer look at memory storage. With the following code we instantiate an ordinary iterable. Based on it we also instantiate an iterator and a generator: 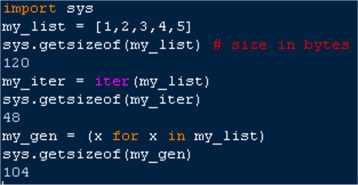 Having the objects, we use the getsizeof function to check the amount of memory occupied by each one. The memory used to store the iterable is 120 bytes. If we then cast the iterable to an iterator, we see a decrease in storage of more than twice – 48 bytes. On the other hand, if we instantiate a generator just by calling every element from my iterable without modifying it, the size of the generator is very close to the size of the iterable. This finding should give you a clue of the behavior of the three types with regard to memory usage.