As simple as this assignment sounds, it isn't representative of what a database developer routinely does. Nevertheless, during times of economic adversity, it is not unusual to encounter business managers wondering about the correlation between economic indicators and company performance.

It is common for business and economic indicators to originate from different organizations that follow other practices for collecting and/or reporting data. These differences can require special codes for importing, processing, and reconciling the structure of economic indicators with business indicators for correlational analyses. For example, stock prices are typically recorded on a trading day basis, and product sales are often aggregated to weekly or monthly totals. In contrast, economic indicators are usually reported yearly, quarterly, or monthly without any indicator values available for daily or even weekly intervals.

For the business indicator in this tip's examples, daily closing prices are tracked for the SPY ticker. This ticker is for the exchange-traded fund that tracks the daily prices of the S&P 500 index. This tip additionally provides daily close prices for the QQQ ticker and the DIA ticker, which are for the NASDAQ 100 index and the Dow Industrial Average, respectively.

The correlational processing examples in this tip are for the SPY ticker versus the nominal GDP and the real GDP. You can practice the processing steps for the SPY ticker with fresh data for the QQQ ticker and the DIA ticker. Given these experiences, you will be equipped to apply correlational analyses to business indicators from your organization, such as gross revenue overall as well as by product category and individual product lines.

The data for all three tickers are from the manual user interface for downloading historical data from Yahoo finance. A prior article reviews and demonstrates the steps for using the manual interface for downloading historical stock prices for a ticker symbol, such as SPY. The business indicator data available in this tip's download are in three files – one file for each of the three tickers referenced above:

Within this tip, the files are saved in this file path: C:\DataScienceSamples\Correlating_index_etfs_with_econ_indicators\. You can save the files in any other path on your computer. Just update the sample code to reflect the alternate path that is used.

The start date for each ticker is different because the security for each ticker started trading on a different date. If you try to collect data for a ticker before its first trading date, Yahoo Finance reminds you to change your request to the first date for which data is available for a ticker, which it supplies in the prompt. Data are collected through the last trading date in October 2022.

The following script includes the T-SQL code for importing the trading date price and volume data for each of the three tickers (SPY, QQQ, DIA).

Another interesting feature of the first eight rows for each ticker is that the start date varies by ticker symbol. The first date for a ticker denotes the initial listing date for a ticker's underlying security on a stock exchange: 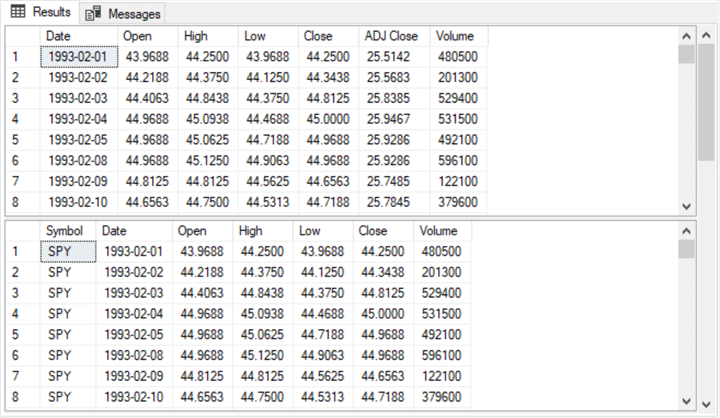 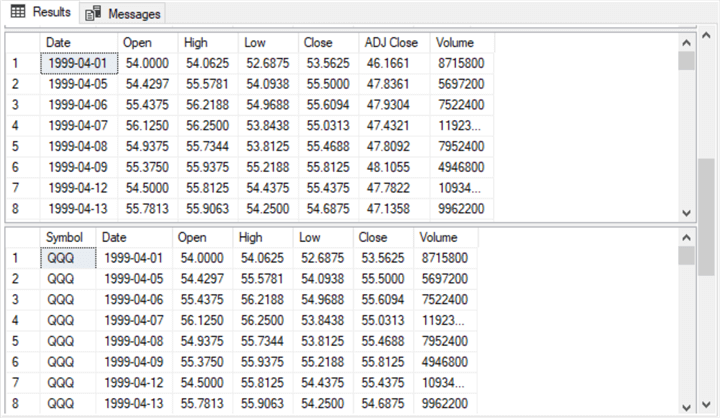 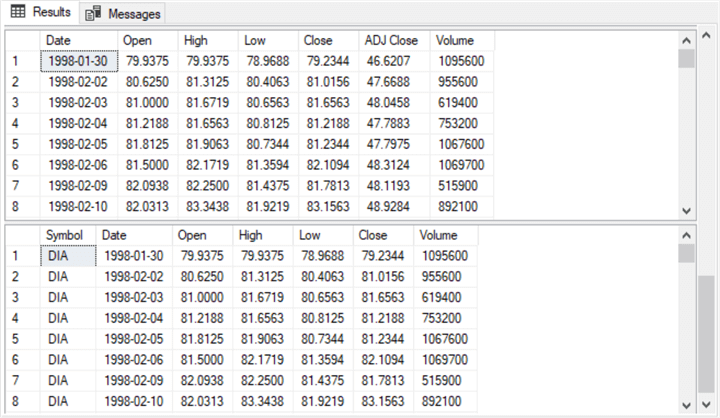 Learning About and Using Two Types of GDP Indicators

Many economists and financial analysts consider GDP the main economic indicator for the health of a country's economy. This indicator tracks the size of the overall economy of a country over a datetime period, such as a year or a quarter. The GDP is a lagging indicator because it reports economic activity through the end of a period. Also, it can take months from the close of a datetime period to get all the inputs for GDP. Therefore, the GDP can go through multiple revisions as more and better data for a period become available.

There are two main types of GDP indicators:

This is a hyperlink for obtaining nominal GDP from the St. Louis Federal Reserve website. If you ctrl+click the hyperlink, you will see a web page like the following one that shows nominal GDP over time. The DOWNLOAD button towards the right edge of the web page permits you to download the underlying data to your computer in several different formats, including as a CSV file. Recall that this is the same format used to receive downloaded data from the Yahoo Finance site. 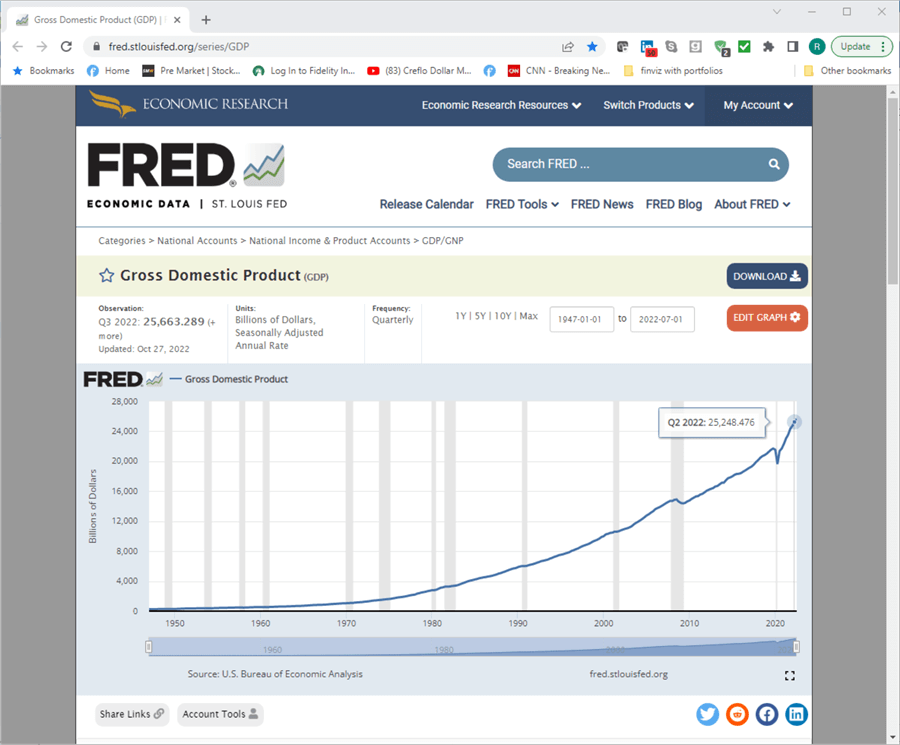 This is a hyperlink for obtaining real GDP from the St. Louis Federal Reserve website. If you ctrl+click the hyperlink, you will see a web page like the following one that shows real GDP over time. The DOWNLOAD button towards the right edge of the web page permits you to download the underlying data to your computer in several different formats, including as a CSV file. Notice that real GDP values are provided in chained 2012 dollars. The US Bureau of Economic Analysis introduced chained dollars in 1996 as a method for adjusting real dollars for the impact of inflation over time. Chained dollars require a base period, and 2012 is commonly used as a base year when reporting real GDP. 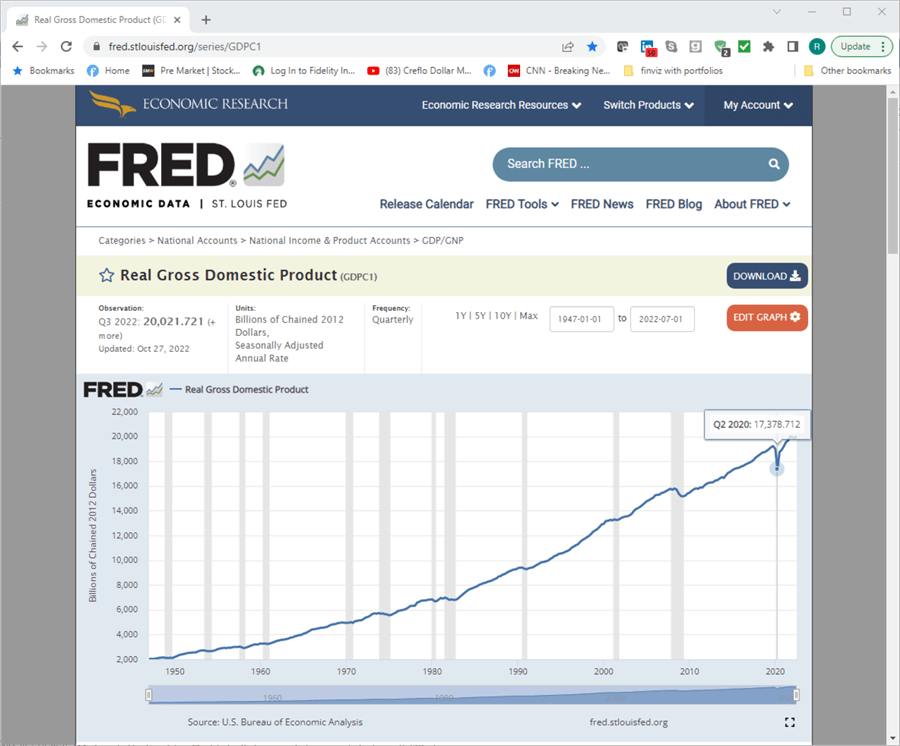 The following script segment imports nominal GDP values from a CSV file. Before running the script, you need to download nominal GDP from the St. Louis Fed website to your computer as a CSV file. For the demonstration in this tip, a file named Nominal_GDP.csv was downloaded to the 'C:\DataScienceSamples\Correlating_index_etfs_with_econ_indicators path on the demonstration computer. Notice that a bulk insert statement transfers content from the downloaded file to a SQL Server table named date_nominal_gdp in the dbo schema of a database named Correlate_Index_ETFs_and_ECON_indices. The final statement in the script displays all rows from the date_nominal_gdp table.

Here are the first and last five rows from the preceding script segment. The date_nominal_gdp table has two columns – one named date and the other named GDP. The results on each row are for a quarter within a year.

Another reasonable question is: what year and quarter should you start joining close prices and nominal GDP values? The downloaded nominal GDP values from the St. Louis Fed go back through the first quarter of 1947. However, SPY close values only started to become available on 1993-02-01. Therefore, the last close value for yearly quarters includes the first quarter of 1993, which ends on the last trading date in March 1993.

The following screenshots show the first and last five quarterly results from the final select statement in the preceding query. The last two columns in both screenshots display nominal GDP and SPY close values. The next section will examine the correlation between these two sets of column values with the help of Excel.

The following script shows an adaptation of the code in the preceding two script segments for nominal GDP and SPY close values to real GDP and SPY close values. The St. Louis Fed represents real GDP values with an economic indicator named GDPC1. Therefore, the script uses two tables to represent real GDP values. The first table (date_gdpc1) represents real GDP with its native name at the St. Louis Fed website. The second table transfers the bulk-inserted values from the date_gdpc1 table to a second table named date_real_gdp. The second table assigns the name [Real GDP] to the imported column of gdpc1 values from a CSV file downloaded from the St. Louis Feb website. After renaming the column of real GDP values, the code has the same structure as in the preceding script.

Is Stock Performance Correlated to Either of Two GDP Types?

The following screenshot shows an excerpt from an Excel worksheet with Nominal GDP values versus SPY close values. 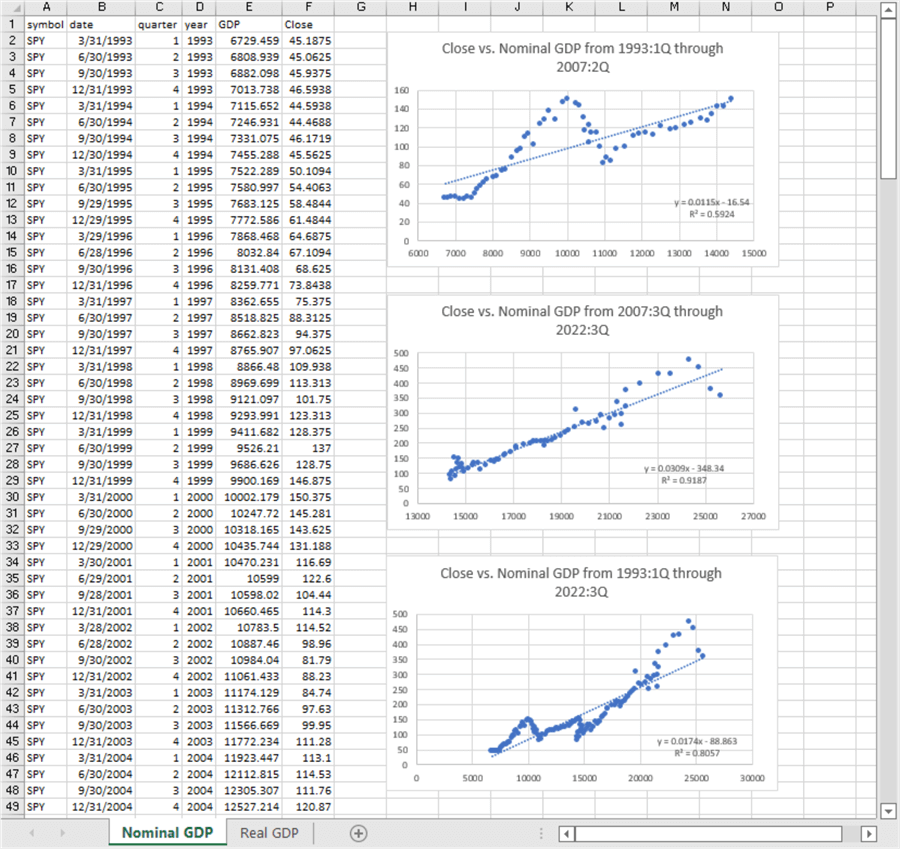 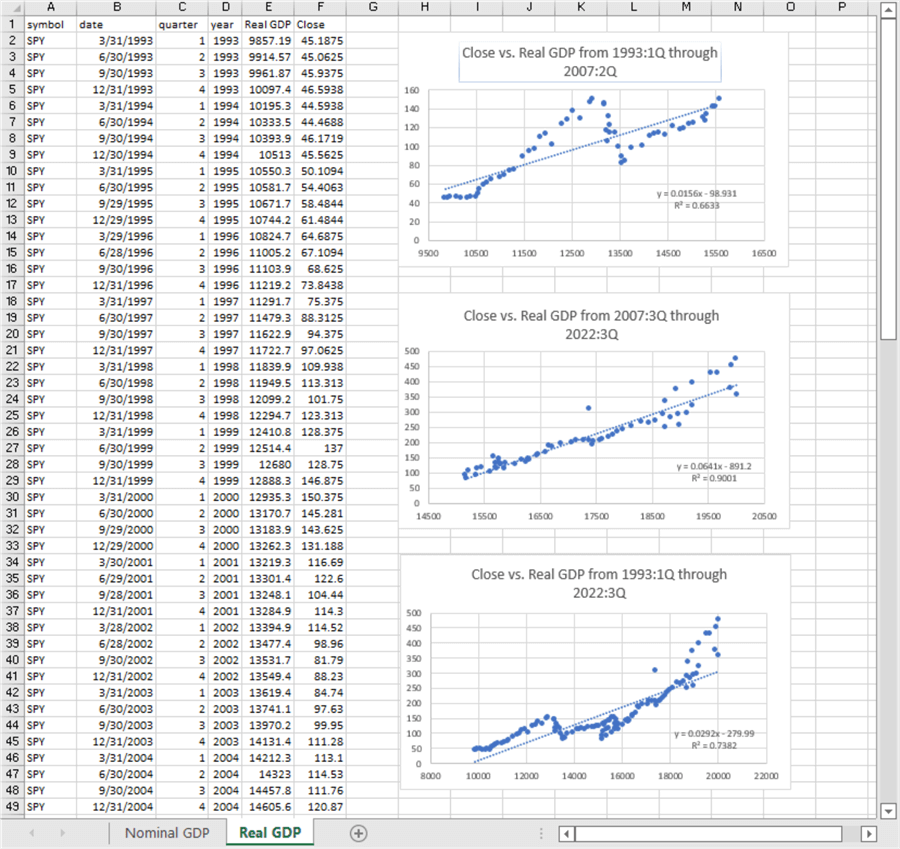 Hopefully, this tip will inspire you to build models of business indicators based on economic indicators.

One obvious next step is to see if you can duplicate the results reported in this tip. To help you achieve that objective, the download to this tip  includes sample T-SQL scripts and CSV files with business indicators downloaded from Yahoo Finance as well as economic indicators downloaded from the St. Louis Fed website. An Excel workbook file in the download includes a couple of tabs that plot SPY close prices versus both nominal GDP and real GDP. The worksheets also display coefficients of determinations that assess the degree of correlation between SPY close prices and GDP values. Recall that you can also practice the computation and display steps for QQQ and DIA close prices.

If you have access to business indicators for your own company with both unit sales and revenue overall, by product category, and by product line, you can conduct correlations between business indicators for your own company and GDP indicators. These correlations may help you provide provocative insights to your managers about how to run their businesses in both good and poor economic times.