Partitioning was introduced with SQL 2005 Enterprise Edition, is a godsend for working with very large tables. It provides the means to effectively manage and scale your data at a time when tables are growing exponentially, but maintenance windows are either shrinking or non-existent as with many 24/7 online environments.  In this tip I will cover some data partitioning myths and truths you should know about.

Having worked with large partitioned databases for a few years, I'd like to share some of my lessons learned. Its important to understand what partitioning is and also what it is not.

Table and index partitioning was an Enterprise only feature in SQL Server 2005 and remained so until SQL Server 2016 prior to SP1. The headaches, maintenance outages, weekend work et al associated with maintaining Very Large Databases can often be eliminated or minimized with a well thought out partitioning scheme.

You can't restore a database with partitioning to an instance where partitioning is not supported. Important to bear this in mind.  Any partition functions and schemes would need to be removed prior to backing up the database and restoring it to an edition that supports partitioning.

Partitioned Views offer similar properties to partitioned tables, but do not require the partitioning feature in SQL Server. Partitioned views was a surprisingly effective but complicated way of 'partitioning' data in SQL 2000 and still works just as well in SQL 2005 and later.

Myth 1: Partitioning is a "Scale-Out" solution

Partitions cannot span servers or instances. Partitions have to be in the same instance and in the same database. Partitioning therefore is a scale-up solution. A scale-out solution for SQL Server can be implemented through distributed partitioned views hosted on Federated Database Servers. This is an advanced solution that I have yet to encounter in my career (I would like to hear from anyone who has actually implemented this in a production environment).

Myth 2: Partitions must be created on different filegroups

Only split your partitions among multiple filegroups if you have a compelling reason to do so. That reason should be increased performance or manageability.

Myth 3: To partition a non-partitioned table you will need to drop and recreate it

Myth 4: Partitioning an existing table is a strictly offline operation

It's true that rebuilding or creating a clustered index is indeed an offline operation. Your table will not be available for querying during this operation. However, partitioning is an Enterprise feature, so we have the online index rebuild feature available to use. The ONLINE = ON option allows us to still query the table while under the covers the partitioning operation is going on. SQL Server does this by using an internal snapshot of the data. Obviously, there is a performance hit and I don't recommend you do this during a busy time but if you have a requirement for 24x7 availability then this is a possible solution.

Myth 5: SWITCH'ing partitions OUT or IN in only a few seconds

You'll often read that that the reason partitioning operations like SWITCH IN and SWITCH OUT are so fast and efficient is that they are "metadata" only operations meaning that there is no actual data movement but only the pointers or internal references to the data get changed.

SWITCH'ing partitions OUT or IN is a truly "meta data" operation in that although the partitioned data has magically moved from the partitioned table to the SWITCH table or vice versa there hasn't actually been any movement of data on the disk or inside the data file. However, in my experience, I have found that with highly transactional partitioned tables the SWITCH operation can get blocked or cause blocking itself. This is due to the ALTER TABLE...SWITCH operation requiring a schema modify lock on both the source and target tables.

To get around this potential blocking issue I always set a timeout before any switch operation so that if the ALTER TABLE...SWITCH does start to cause blocking it will only be for as long as the timeout. I will then re-issue the ALTER TABLE...SWITCH statement repeatedly with the timeout until the operation goes through successfully. In this way the partition maintenance task will not interfere with the OLTP function of the database:

In the example below I set a 30 second timeout for the SWITCH to complete. If it timeouts I will repeat until it completes successfully.

Myth 6: Altering a partition function is a metadata only operation

In practice you may find out that a MERGE or SPLIT operation may take much longer than the few seconds expected. Altering a partition function is an offline operation and can also result in movement of data on disk and so become extremely resource intensive.

To avoid or minimize data movement when SPLITing a partition function always ensure that you know beforehand how many rows are in the underlying partition that is being SPLIT and how many rows would fall on each side of the new boundary. Armed with this information you should be able to determine beforehand the amount of data movement to expect depending on whether you have defined your partition function using RANGE RIGHT or LEFT.

Both tables below have a nonclustered index defined on the commodity column. The index on table tblPartitioned has been created on the partition scheme to align it with the clustered index but as we can see from the below this causes each partition to be scanned because the partition key is actually on a different column.

The graphical query plan clearly shows the difference in cost between the two queries. The top partitioned table query 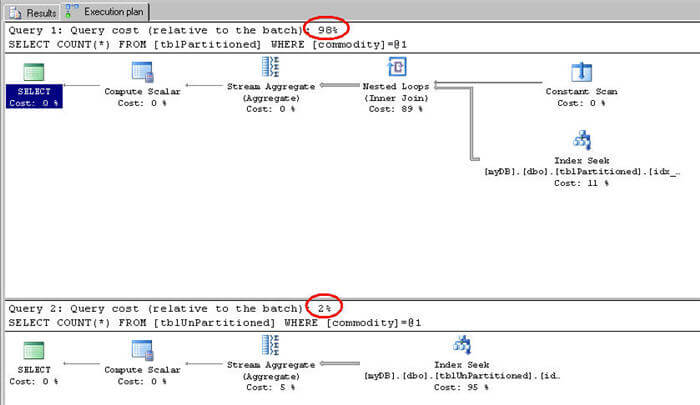 If we also filter on the partition key column we get the desired performance improvement over the equivalent query on the unpartitioned table. If you are partitioning tables in an existing database then its a good idea to test all your queries for performance. Don't assume that once the data is partitioned that your queries will improve. Queries may need to be updated to include the new partition key in the where clause or join to take advantage of the performance benefits of partitioning.

Partitioning can be effectively used to break up a very large table into multiple partitions based on a column or partitioning key. However, there can be significant management overhead in maintaining partitioned tables. The features of partitioned tables that give you the ease of management can also conspire against you to make your maintenance a nightmare!

Note that old style DBCC SHOWCONTIG command does not work for partitioned indexes. You need to familiarize yourself with the more powerful DMV sys.dm_db_index_physical_stats. This DMV returns fragmentation information at a partition level and provides you the necessary information to make a decision on which partitions require rebuilding or reorganizing.

Once fragmentation has been identified we can rebuild the index statement for just that single partition:

If you're partitioning your data on a date field and you have a sliding window and you are only ever adding data to the right most partitions then you can save unnecessary overhead by not checking for fragmentation of older partitions where you already know they are not fragmented. sys.dm_db_index_physical_stats DMV allows you to specify a partition number. This greatly improves IO over full index scans and has the potential to shorten maintenance job durations.

Well designed database partitioning gives the DBA the opportunity to effectively work with massive amounts of data while at the same time providing the same level of performance as a small database. Having a sound partition management and maintenance plan will free up valuable DBA time to concentrate on more challenging problems and opportunities.

Creating a table with horizontal partitioning in SQL Server

How to Partition an existing SQL Server Table

How to Partition a SQL Server Table with a Columnstore Index

Why shouldn't I create 15,000 SQL Server partitions in advance?